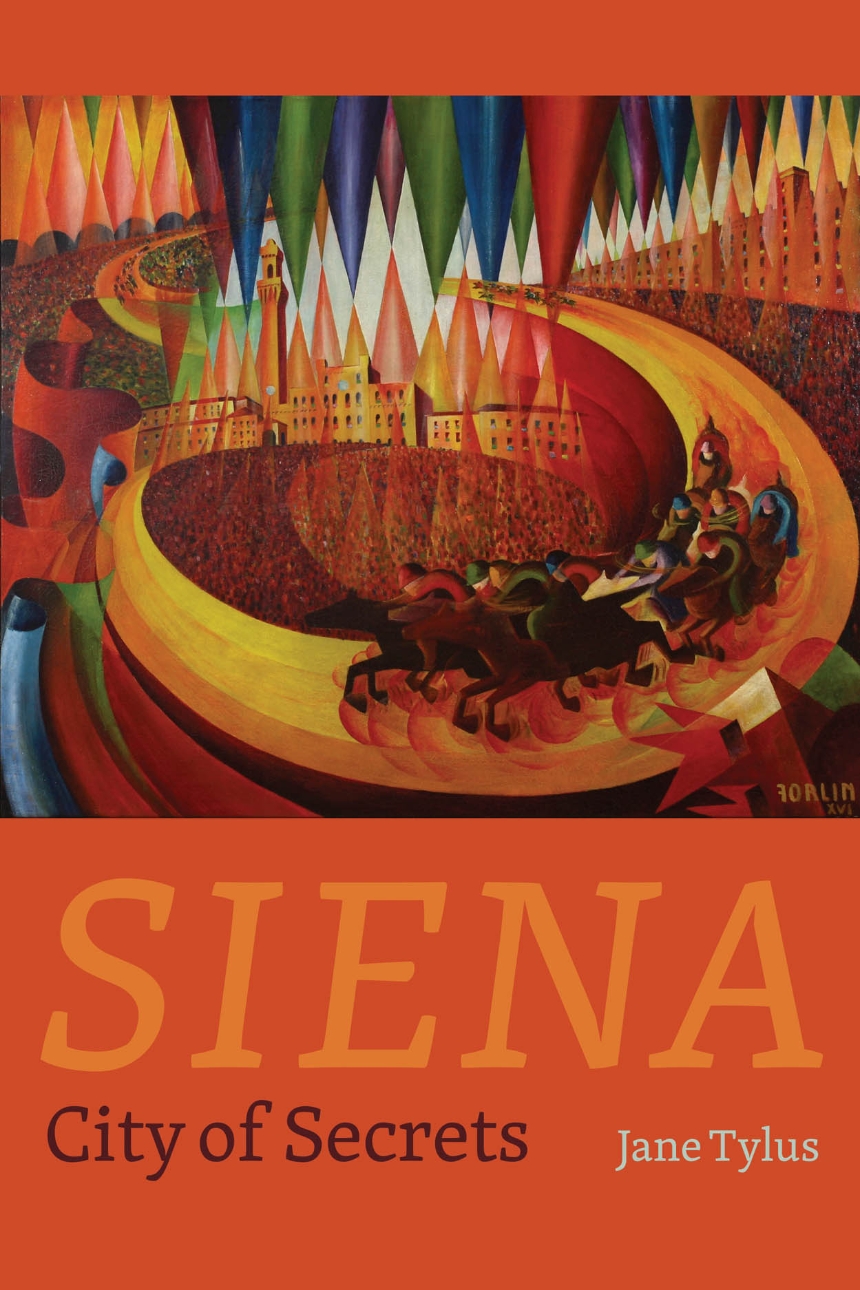 Jane Tylus’s Siena is a compelling and intimate portrait of this most secretive of cities, often overlooked by travelers to Italy. Cultural history, intellectual memoir, travelogue, and guidebook, it takes the reader on a quest of discovery through the well- and not-so-well-traveled roads and alleys of a town both medieval and modern.

As Tylus leads us through the city, she shares her passion for Siena in novelistic prose, while never losing sight of the historical complexities that have made Siena one of the most fascinating and beautiful towns in Europe. Today, Siena can appear on the surface standoffish and old-fashioned, especially when compared to its larger, flashier cousins Rome and Florence. But first impressions wear away as we learn from Tylus that Siena was an innovator among the cities of Italy: the first to legislate the building and maintenance of its streets, the first to publicly fund its university, the first to institute a municipal bank, and even the first to ban automobile traffic from its city center.

We learn about Siena’s great artistic and architectural past, hidden behind centuries of painting and rebuilding, and about the distinctive characters of its different neighborhoods, exemplified in the Palio, the highly competitive horserace that takes place twice a year in the city’s main piazza and that serves as both a dividing and a uniting force for the Sienese. Throughout we are guided by the assured voice of a seasoned scholar with a gift for spinning a good story and an eye for the telling detail, whether we are traveling Siena’s modern highways, exploring its underground tunnels, tracking the city’s financial history, or celebrating giants of painting like Simone Martini or giants of the arena, Siena’s former Serie A soccer team.

A practical and engaging guide for tourists and armchair travelers alike, Siena is a testament to the powers of community and resilience in a place that is not quite as timeless and serene as it may at first appear.

"Successfully mixes a wide variety of genres and in many ways defies categorization. . . . The result is an outstanding volume, which demonstrates all the qualities the author has shown in her earlier works, and more. . . . At the book’s structural heart lies the Santa Maria della Scala, or Spedale. One of the first hospitals in Europe, it began by welcoming pilgrims and then the sick. One of its last patients before it reopened as a museum was the writer Italo Calvino, who died there in 1985 after a stroke, and from whom Tylus seems to have learned not a few lessons in terms of the simplicity and lightness of her style and the intricate patterns of her textual architecture. Like Calvino, Tylus has an eye for detail. . . . During the course of her journey, she accumulates many riches, which she generously passes on here."

"[Tylus's] fundamental theme is that of Siena's indelible sense of its distinctiveness, present in everything from a vaporous Beccafumi fresco to the hermetic shimmer of Mario Luzi's poetry. In an epigraph to his collection Parole pellegrine, the poet enquires of his former life in the city: 'To what was I at once both accomplice and stranger?' Doubtless because she understands how to be both of these simultaneously, Tylus brings greater empathy than any of her forerunners writing on Siena to the decoding of its secrets."

"Tylus has not produced a history or travel guide to Siena--there are plenty of those--but, as her subtitle indicates, something more intimate and personal. Her narrative mentions all the main architectural sights, works of art and cultural activities, but interweaves these with digressions that jump back and forth from the past to the present, from the core of the city to its surroundings, from its very foundations to the pinnacles of its towers. In this she mirrors in her text the rich, complex, undulating, and labyrinthine city to which she keeps returning."

“Siena is indeed a city of secrets; it’s always been too secretive for me, despite (or because of) its breathtakingly beautiful surfaces. Tylus manages wonderfully to unfold mysteries while keeping the secrets alive and alluring. The book is a marvelous mixture of erudition and personal reminiscence. Her literary and historical mastery is absolute, but she is also a delightful companion enabling us to travel the city as it exists now and the city with centuries of its history as though intact before our gaze. Read Siena and see the city through the eyes of a particularly gifted observer who is also a gifted writer.”

Leonard Barkan, author of Michelangelo: A Life on Paper

"Quite a few scholars feel that they have a 'crossover book,' maybe even a novel in them, but not many can bring it off with Tylus's literary flair. Tylus's dynamic city cuts across romantic and realist stereotypes that have oddly conspired to make Siena seem at once poignantly pretty, frozen in time, and insouciant, unable or unwilling to manage its affairs. Specialists may admire the work, quibble (which is what makes them specialists), or just be envious, but its true audience will be lay lovers of Italy, actual and armchair travelers, and Anglophone students who want a preview or a postlude to studying in Siena. I don't know of any book on Siena in any language better suited to such a readership or a reading."

"By presenting Siena as a pilgrim's city, Jane Tylus has provided an essential key to its complicated beauty.  Best of all, she provides every visitor with a genuine sense of belonging, for she shows, ranging across the centuries, that we wayfarers have been as essential a part of Siena's timeless cityscape as our Tuscan hosts.  A haunting, evocative book about one of the world's most wondrous places."

Ingrid Rowland, author of From Pompeii: The Afterlife of a Roman Town

Neither guidebook, nor memoir, nor academic text, but all of these, Tylus’s Siena takes readers into the nooks and crannies of this splendid medieval city without ever losing sight of the larger cultural issues that define Sienese identity. Tylus has done a prodigious amount of research, but she wears her erudition lightly, and writes with a novelist’s flair. She evinces a deep love for Siena, leavened by a wry sense of amusement at the quirks of the native Sienese, and a nuanced understanding of what can make them seem insular. What resides at the center of this book is the story of the author as veteran sojourner—more rooted than tourist or pilgrim, but never quite able to attain that sense of belonging that is the Sienese birthright.  Herein lies the fascination and the challenge of Siena: City of Secrets.

Millicent Marcus, author of After Fellini: National Cinema in the Postmodern Age