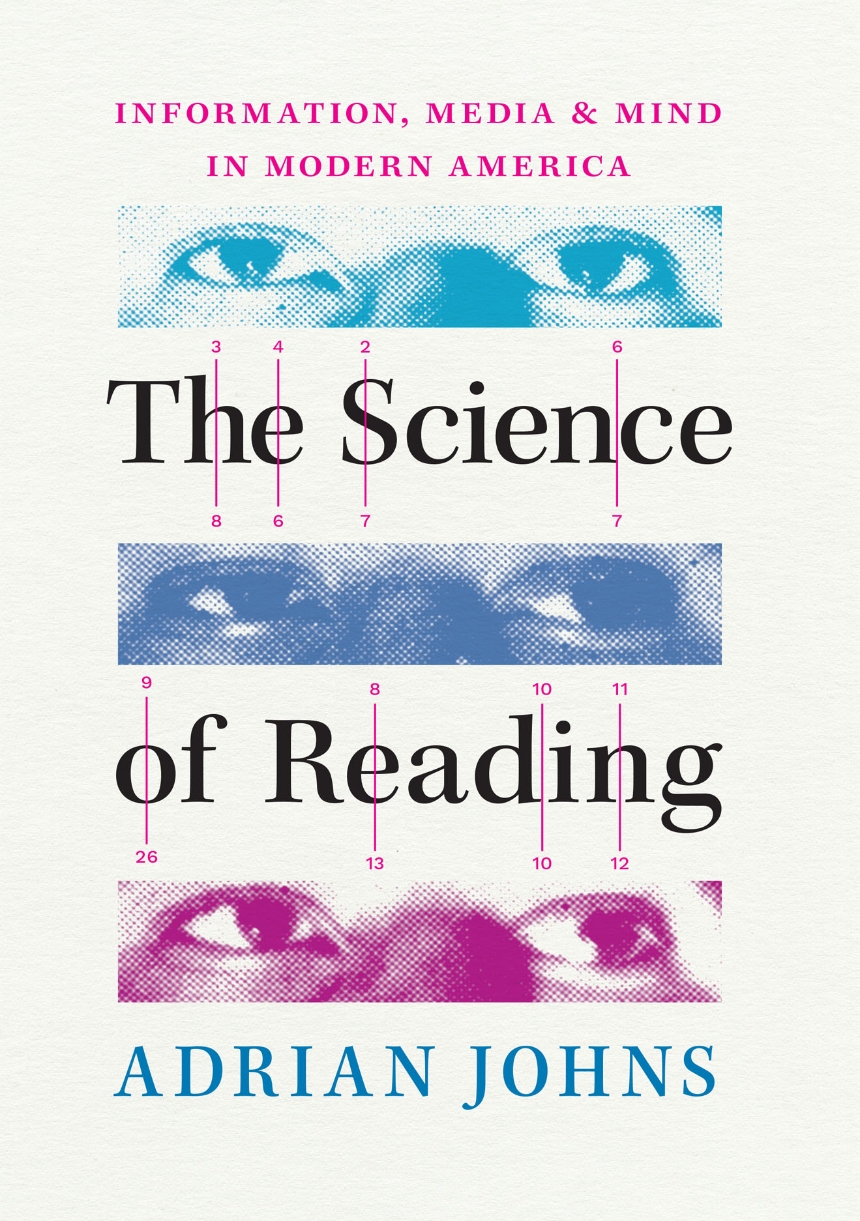 The Science of Reading

The Science of Reading

For the first time, the story of how and why we have plumbed the mysteries of reading, and why it matters today.

Reading is perhaps the essential practice of modern civilization. For centuries, it has been seen as key to both personal fulfillment and social progress, and millions today depend on it to participate fully in our society. Yet, at its heart, reading is a surprisingly elusive practice. This book tells for the first time the story of how American scientists and others have sought to understand reading, and, by understanding it, to improve how people do it.

Starting around 1900, researchers—convinced of the urgent need to comprehend a practice central to industrial democracy—began to devise instruments and experiments to investigate what happened to people when they read. They traced how a good reader’s eyes moved across a page of printed characters, and they asked how their mind apprehended meanings as they did so. In schools across the country, millions of Americans learned to read through the application of this science of reading. At the same time, workers fanned out across the land to extend the science of reading into the social realm, mapping the very geography of information for the first time. Their pioneering efforts revealed that the nation’s most pressing problems were rooted in drastic informational inequities, between North and South, city and country, and white and Black—and they suggested ways to tackle those problems.

Today, much of how we experience our information society reflects the influence of these enterprises. This book explains both how the science of reading shaped our age and why, with so-called reading wars still plaguing schools across the nation, it remains bitterly contested.

“If the science of reading can today teach us one thing, Johns states, it is that reading is not and has never been just one thing. It has been and remains many things. Its functions, forms, and purposes change over time and are shaped by history and cultures. Johns’s new book is attentive, erudite, imaginative, and enjoyable. (Reading about the science of reading makes for great fun. I promise.) It is also mind-bendingly revelatory. In TheScience of Reading, Johns radically historicizes reading itself.”

Chad Wellmon, coauthor of "Permanent Crisis: The Humanities in a Disenchanted Age"

“The Science of Reading unearths a previously ignored but important history. Starting with the science of psychophysics in the late nineteenth century, Johns traces how knowledge, disciplines, documentary practices, and models of the human mind and cognition all changed in relationship to the shift from an industrial to an information economy. He thus reveals that many of our contemporary debates about attention economies, fake news, and democratic crisis rest on historically contested concepts about what reading might constitute and what a literate subject is. This is a book with great pertinence to our present.”

“A mammoth and stimulating account of the place of print in the history of knowledge. . . . Johns has written a tremendously learned primer.”

D. Graham Burnett | New Republic, on "The Nature of the Book"

“Detailed, engrossing, and genuinely eye-opening. . . . This is scholarship at its best.”

Merle Rubin | Christian Science Monitor, on "The Nature of the Book"

“Lucid and persuasive. . . . A work to rank alongside McLuhan.”

John Sutherland | Independent, on "The Nature of the Book"

Michael Hunter | Nature, on "The Nature of the Book"

Acknowledgments
Introduction: The Mysterious Art of Reading
1 A New Science
2 The Work of the Eye
3 Reading, Looking, and Learning in Chicago
4 What Books Did to Readers
5 Readability, Intelligence, and Race
6 You’re Not as Smart as You Could Be
7 Exploring Readers
8 Reading Wars and Science Wars
9 Readers, Machines, and an Information Revolution
Conclusion: Reading, Science, and History
Notes
Index
Excerpt

Reading is a good thing. We like to believe that it is a fundamental element of any modern, enlightened, and free society. We may even think of it as the fundamental element. It has long been standard to identify the emergence of contemporary virtues like democracy, secularism, science, and tolerance with the spread of literacy that occurred in the wake of Johannes Gutenberg’s invention of printing in the fifteenth century. And of course we maintain that the ability to read successfully is functionally essential for anyone who wishes to become a fully actualized, participating citizen in the modern world. Almost nobody nowadays would argue that reading is anything but a beneficial and intrinsically meritorious practice for everyone. If there is one practice that unites the most elevated moral reflections on modernity with the most quotidian of everyday experiences, reading is it.

All of us who are literate—and it is worth remembering for a moment that many even in the developed world are not—have, of course, learned to become so. Reading, as one of its first scientific investigators pointed out, is not natural. No nonhuman creature has ever done it, as far as we know. And yet, “this habit,” as Edmund Burke Huey marveled in 1908, “has become the most striking and important artificial activity to which the human race has ever been moulded.” Huey was surely right in that arresting realization. And the questions that forced themselves upon his mind in consequence of it were surely the appropriate ones too. Since reading is unnatural, he asked, “What are the unusual conditions and functionings that are enforced upon the organism in reading? Just what, indeed, do we do, with eye and mind and brain and nerves, when we read?” Apparently simple, these questions are in fact deep and complex; and they are extremely difficult to answer. They require not only sophisticated psychological and physiological concepts but stances on such matters as the mind-body relationship and the nature of knowledge itself. All of science and philosophy, we might almost say, are implicit in them. That is surely why, Huey observed, in ancient times reading was accounted “one of the most mysterious of the arts,” and why its operation was still accounted “almost as good as a miracle” even in his own day. And yet, starting in about 1870, generations of scientists did take on Huey’s questions. The Science of Reading is about the rise and fall—and subsequent rise again—of the enterprise these scientists created to answer them.

Huey posed those questions at the beginning of what was the first major book in this new science to be published in America. The Psychology and Pedagogy of Reading first appeared in 1908 and proved to have extraordinary longevity. The volume is valuable as a gateway into the subject of this book, not only because of its prominence in the field, which is unrivaled, but also because Huey was remarkably and explicitly reflective about the cultural concerns that underpinned his new science and gave it its purpose. I shall say more about this in chapters 1 and 2, but for now it is useful simply to call to mind the historical distance that separates readers today from those whom Huey investigated in the late nineteenth and early twentieth centuries. Although the questions that he posed in his research were in one sense naturalistic—that is, they were questions about the properties of readers considered as human beings in general, independent of time and place—Huey was well aware that what made those questions meaningful were contemporary contexts both large and small. He was writing in the era of the first mass education and the first mass democracy. Industrialization and the Gilded Age had given rise to giant capitalist institutions that transformed perceptions of society and people’s places in it. Telegraphy and telephony were transforming communications, and radio would soon do so even more. The mass-circulation newspaper was changing how people thought about themselves, their privacy, and that oddly numinous entity “the public.” Optimism about social and technological progress was tempered with anxieties about decadence, degeneration, addiction, atavism, and other perils. And Darwinism—social as well as natural—suggested powerful ways to understand and master the dynamics of all these processes, for good and ill. As we shall see, Huey had all these hopes and fears very much in mind when he made his remarks about reading’s marvelous and mysterious power. They played a signal part in motivating his pursuit of a scientific approach to the practice.

One aim of this book is to explain the origin, development, and consequences of the science of reading that Huey and his peers inaugurated. In that light, its approach is thoroughly, and, I hope, convincingly, historical. Yet it is also worth considering that the questions that excited researchers in Huey’s time do have their echoes in our own age just over a century later. We too have our optimistic hopes and our existential anxieties, many of which have to do with new communications systems and the problems of large-scale capitalist institutions. The economic and social inequalities of 2020s society, notoriously, are greater than they have been at any time since Huey’s, and it is possible that the moral and political instability arising from the conjunction of communications technologies and social strains may prove as great. True, we now talk about our situation in rather different terms than Huey used to address his. We invoke information technology, surveillance capitalism, and attention, and we worry about what happens in and to our brains as they are exposed to the firehose blast of multichannel, polysensory information that characterizes twenty-first century life. Those are concepts and technologies quite different from Huey’s. But when we ask how we can educate the next generation so they may live full lives in this environment, and nobody seems to have a definitive answer, our concerns are not so far removed from his generation’s. And in many ways our capacity to pose and tackle such questions is indebted to that generation’s work. Moreover, as we shall see, the science of reading that evolved from that time is in fact responsible for central aspects of the very experience that inspires our own anxious questioning.

The story told in this book therefore does not end with the ascendancy of the science of reading in the 1930s, 1940s, and 1950s, nor even with its eclipse—temporary, as it turned out—in the 1960s and 1970s. It extends into the present. One point is to cast light on the ways in which we think about equivalent problems today. Although the science of reading that Huey and his fellows brought into being does not provide answers for us in any simple way, considering it historically does help us appreciate our own questions and their meanings in a better light. And a history of the science of reading need not be so rigorously self-denying as to shy away from profound questions about how and why we now think, wonder, and fear as we do.