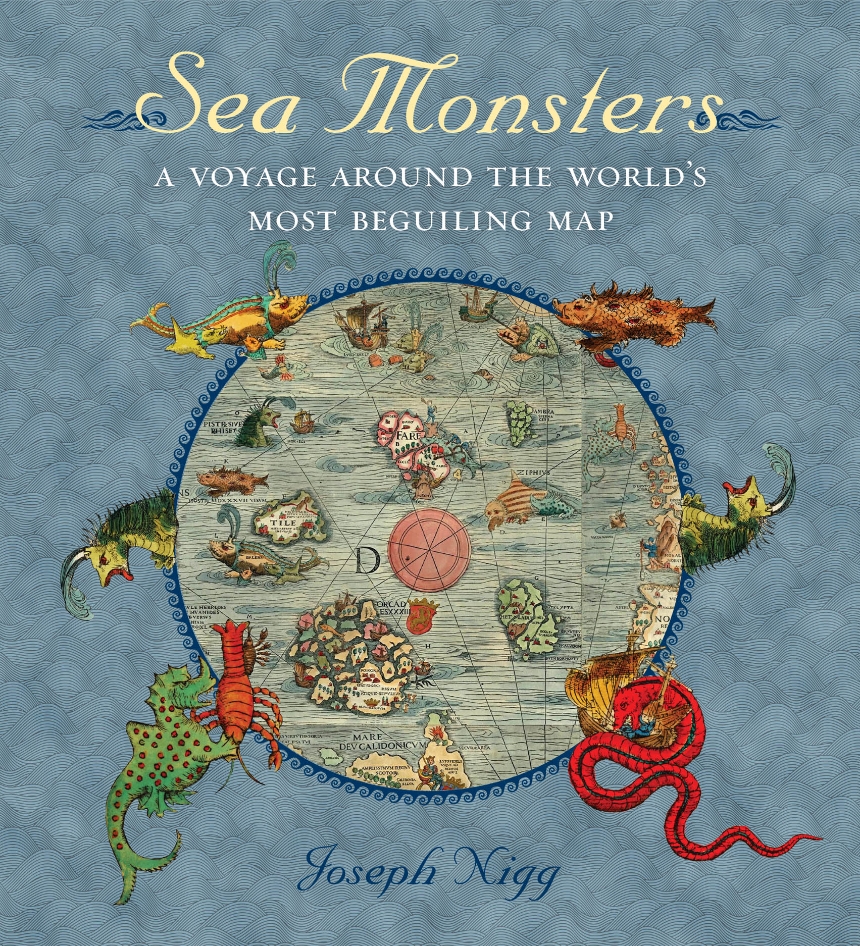 A Voyage around the World’s Most Beguiling Map

A Voyage around the World’s Most Beguiling Map

Smart phones and GPS give us many possible routes to navigate our daily commute, warn us of traffic and delays, and tell us where to find a cup of coffee. But what if there were sea serpents and giant man-eating lobsters waiting just off course if we were to lose our way? Would there be an app for that? In the sixteenth century, these and other monsters were thought to swim the northern waters, threatening seafarers who ventured too far from shore. Thankfully, Scandinavian mariners had Olaus Magnus, who in 1539 charted these fantastic marine animals in his influential map of the Nordic countries, the Carta Marina. In Sea Monsters, well-known expert on magical beasts Joseph Nigg brings readers face-to-face with these creatures, alongside the other magnificent components of Magnus’s map.
Nearly two meters wide in total, the map’s nine wood-block panels comprise the largest and first realistic portrayal of Northern Europe. But in addition to these important geographic elements, Magnus’s map goes beyond cartography to scenes both domestic and mystic. Close to shore, Magnus shows humans interacting with common sea life—boats struggling to stay afloat, merchants trading, children swimming, and fisherman pulling lines. But from the offshore deeps rise some of the most magical and terrifying sea creatures imaginable at the time or thereafter—like sea swine, whales as large as islands, and the Kraken. In this book, Nigg provides a thorough tour of the map’s cartographic details, as well as a colorful look at its unusual pictorial and imaginative elements. He draws on Magnus’s own text to further describe and illuminate the inventive scenes and to flesh out the stories of the monsters.
Sea Monsters is a stunning tour of a world that still holds many secrets for us land dwellers, who will forever be fascinated by reports of giant squid and the real-life creatures of the deep that have proven to be as bizarre and otherworldly as we have imagined for centuries. It is a gorgeous guide for enthusiasts of maps, monsters, and the mythic.

“In a beautiful new exploration of the Carta Marina, Sea Monsters: A Voyage Around the World’s Most Beguiling Map, scholar Joseph Nigg dives deep into the history and wide influence of Olaus’ bizarre creatures.”

“Nigg, the inventive mind behind How To Raise and Keep a Dragon, has immersed himself in the lore and history of imaginary animals for 30 years. His newest book, Sea Monsters: A Voyage Around the World’s Most Beguiling Map, is itself a neat trick. Unfold the book jacket to reveal a poster-sized reproduction of a richly detailed map of Scandinavia that dates to 1539. The seas on the map are littered with fantastic creatures, such as a sea unicorn and a giant worm that wraps itself around a big ship. Nigg is an extremely capable guide through the treacherous waters.”

“Nigg explore[s] maps as maps, with monsters as the decorative—and instructive—elements in the mapmakers’ repertory, and bring[s] the story into the present, showing how ‘the geography of the marvellous’ has deeply imprinted the collective imagination and has naturalized ancient sea monsters through different media, including video games.”

INVITATION TO A VOYAGE