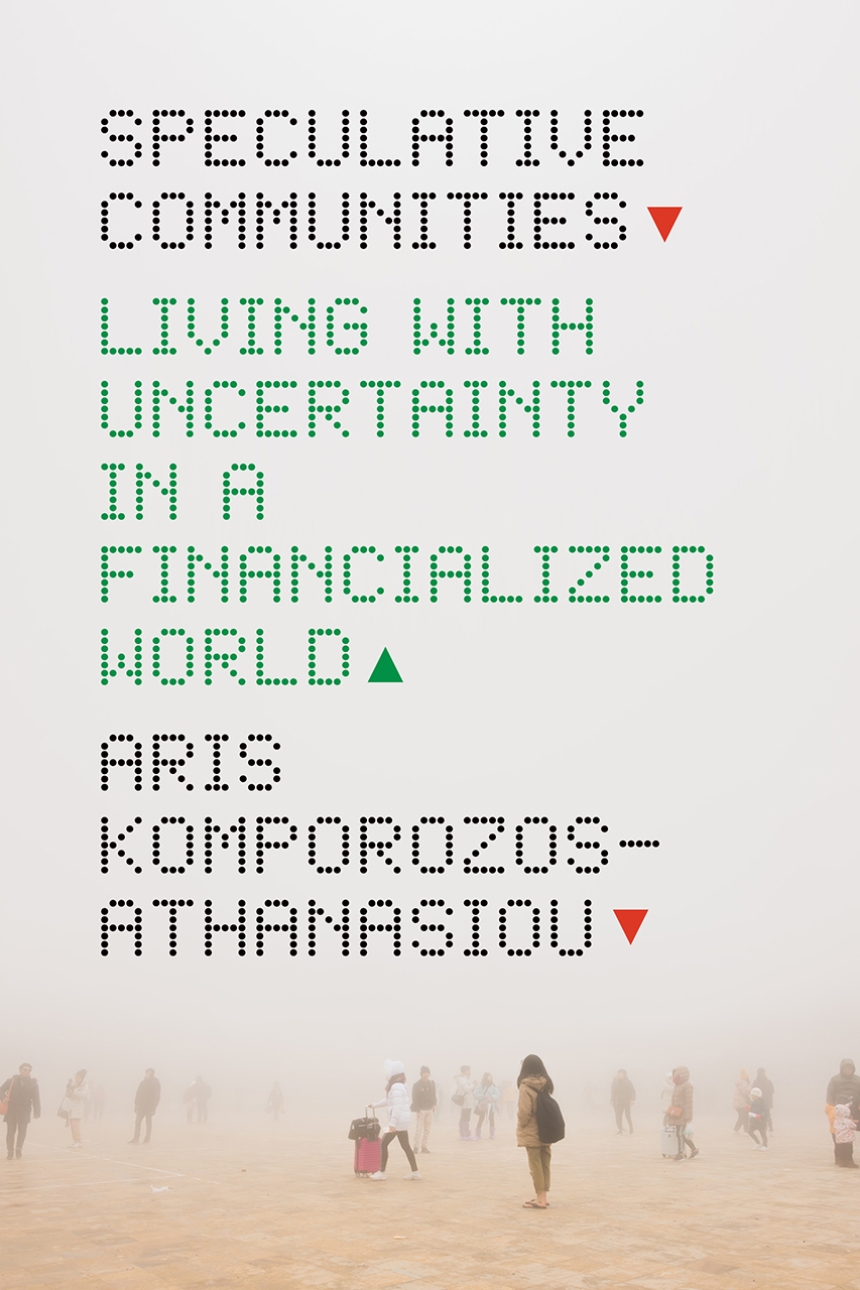 Living with Uncertainty in a Financialized World

Living with Uncertainty in a Financialized World

Speculative Communities investigates the financial world’s influence on the social imagination, unraveling its radical effects on our personal and political lives.

In Speculative Communities, Aris Komporozos-Athanasiou examines the ways that speculation has moved beyond financial markets to shape fundamental aspects of our social and political lives. As ordinary people make exceptional decisions, such as the American election of a populist demagogue or the British vote to leave the European Union, they are moving from time-honored and -tested practices of governance, toward the speculative promise of a new, more uncertain future. This book shows how even our methods of building community have shifted to the speculative realm as social media platforms enable and amplify our volatile wagers.

For Komporozos-Athanasiou, “to speculate” means increasingly “to connect,” to endorse the unknown pre-emptively, and often daringly, as a means of social survival. Grappling with the question of how more uncertainty can lead to its full-throated embrace rather than dissent, Speculative Communities shows how finance has become the model for society writ large. As Komporozos-Athanasiou argues, virtual marketplaces, new social media, and dating apps bring finance’s opaque infrastructures into the most intimate realms of our lives, leading to a new type of speculative imagination across economy, culture, and society.

Economics and Business: Economics--General Theory and Principles, Economics--Money and Banking

“The density of resources and ideas is . . . energizing, and the frameworks it provides . . . are extremely useful for anyone interested in the overlapping worlds of technology, finance, and politics. . . . Komporozos-Athanasiou’s point is not so much that every sphere of life is programmatically ordered as a speculative market, but that we find ourselves assuming—sometimes by choice, sometimes by default—the attitude of speculators in everyday life.”

"Speculative Communities is not just another critique of neoliberalism-inflected financial capitalism. It is a novel and audacious attempt to construct a conceptual framework with which it becomes possible to articulate and address major questions concerning our economies, our financial system, our democratic institutions, and our increasingly digital technology-mediated lives. Moreover, it is a truly original book and a great political sociology contribution to the already rich literatures on financialization in economic sociology (e.g., social studies of finance) and political economy (e.g., critical macro finance)."

"Speculative Communities is a masterful critique of the financialisation of everyday life, which provides an innovative account of the role of speculation and uncertainty in shaping the way we understand, and act within, the world. Komporozos-Athanasiou masterfully blends economic theory with political and sociological analysis to deliver a fascinating reading of how finance has colonised our imaginations, and the challenges this process poses to movements seeking to construct a collective sense of what life beyond capitalism might look like. Speculative Communities is both a novel and exciting academic contribution, and a critical reference point for those seeking to organise in a world defined by the logic of speculation."

Grace Blakeley, author of Stolen: How to Save the World From Financialisation

"In this bold intervention, Aris Komporozos-Athanasiou shows us how financialized capitalism disseminates uncertainty while at the same time creating new possibilities of connection. The result is a compelling theory of the alliance between existential insecurity and paranoid certitude in contemporary nationalist populism. An important and timely book."

Melinda Cooper, author of Family Values: Between Neoliberalism and the New Social Conservatism

"This highly original study shifts the idea of speculation away from seeing the flaws of capitalism to providing the basis of a critique of it. It also lays the foundations of a subversive vision which connects speculation, politics and progressive futurity in the struggle for financial justice and social solidarity."

“This is an exciting, intelligent, inviting book. The argument offers a new way of understanding the scope, infiltration, and diffuse power of financialization and its promised, speculative futures.”

"A brilliant book, engaging with some of the most important current questions of social and political development, coherently argued, and beautifully written.”

Jens Beckert, Max Planck Institute for the Study of Societies

"It is clear that there are powerful political forces afoot that are not well understood, and Speculative Communities provides a novel framework for trying to understand them."

Capitalist societies have always relied on their capacity to anticipate, imagine, and speculate on the future in order to navigate its uncertainty and volatility. But what happens to our power of imagination in the era of populist demagogues, “fake news,” and “culture wars,” when uncertainty becomes radicalized and the boundary between reality and fiction fades away? Deep economic, political, and environmental crises have marked the twenty-first century’s first two decades. The world over, trust in public institutions and scientific knowledge is eroding, liberal democracies are becoming hollowed out, and a global tide of nationalist populism is on a precipitous rise. Our era seems to be on a hinge. Time itself feels anxious and unpredictable, while prevailing orthodoxies are shaken in both economy and polity. As societies strive to formulate responses to the volatile conditions wrought by these profound shake-ups, their need for orienting narratives and myths becomes even greater. And as we anxiously search for cues with which to imagine such narratives and myths, finance becomes the model for society writ large.

This book is an attempt to untangle finance’s formidable imagination—to make sense of its impact on the ways we respond to our epoch’s profound challenges, not just in the sphere of the economy but across all realms of contemporary life. In doing so, it departs from popular critiques of finance as a source of individuation, social fragmentation, and, of late, a cause of right-wing populist backlash. I argue instead that finance’s transformative force is part of a larger story that we need to understand. Contemporary markets have reshaped capitalist societies through mass-scale reconfiguration of credit and debt relations, deepening existing inequalities and spurring new social struggles, which are increasingly fought on markets’ turf: speculative fights around individuals’ creditworthiness and organizations’ asset values substitute for traditional wage-labor conflicts. I contend, however, that finance’s speculative forces are also key levers in the constitution of our modern imagined communities. They mold contemporary societies’ collective myths, elicit their nagging anxieties, and suffuse their confused desires and clouded aspirations. We live in the age of speculative communities.

“To speculate” means increasingly “to connect,” to endorse uncertainty preemptively, and often tactically, as a means of social survival. At the same time, speculating is not just how we relate to the future (by anticipating and imagining it) but how we make it actionable in the present. Futures, securities, bonds—terms once repurposed for the market speculator’s lexicon, return to our everyday social and political vernacular to imbue it with finance’s own ambition. The narratives this new vernacular pursues are more open ended than those of “security” and “control.” If the only certainty in our present is that the future is uncertain, then shorting and hedging the unknowable becomes the zeitgeist of contemporary financialized societies.

In recent years, there has been a noteworthy upsurge of (popular and academic) interest in uncertainty and chaos and, specifically, in how these conditions are being exploited for political gain. Cyber attacks, “fake news mills,” “troll farms,” and “disinformation warfare” are the order of the day in mainstream politics. Conspiracy theories continue to gather strength, from new anti-vaccination movements denouncing the coronavirus pandemic as a scam to QAnon’s assertions of an anti-Trump “deep state,” from Hungary’s anti-Soros speculations to Brazil’s anticommunist propaganda. This state of affairs reflects a new political unreality, a world rendered more and more opaque by a deliberate sowing of confusion. At the same time, such opacity and confusion become common features of everyday social life. Our routine navigations of image-hungry social media such as Instagram, YouTube, and TikTok teem with disorienting videos unfurling on our smartphones. Screen time and real time collapse in the short-lived experience of Facebook’s perpetual scroll and Tinder’s left-or-right swipe—a nervous pursuit for ephemeral connection that seems at once compulsive and unyielding. With each scroll and swipe, our notions of truth and observable reality seem to drift further out of our reach. This book’s distinct innovation is to tie these developments to a set of deeper transformations undergirded by modern-day finance, which I consider to be both socially and politically generative. The notion of speculative communities I develop is not just an economic metaphor but a concept that will help me stitch together different repertoires of responses to radical uncertainty and frame the distinct forms of dwelling in the present’s queasy volatility. Rather than simply a critique of finance, then, the contribution I endeavor to offer in what follows is a broader conceptual framing of modern capitalist society as a whole.

Ever since George Simmel’s authoritative Philosophy of Money, and over the course of the long twentieth century, sociologists have richly cataloged the myriad entanglements between finance and society. We know how economic exchanges, promises, and interests entrench themselves into life’s social fabric, not merely to corrode but also to shape capitalism’s intimate bonds. We also know how finance’s tempestuous dynamics comes alive in the modern world of derivative and high-frequency trading, where algorithms and screens connect (and disconnect) imagined communities of traders. At the same time, studies abound on the powerful political rationality of our time’s finance-driven neoliberalism, as well as the alternative rationalities emerging against globalized finance—from self-reflexive cosmopolitanism and populist reason to the subaltern rationalities of postcolonial polities. There are still, however, very few sociological works dealing with the intensified struggles of imagination within finance capitalism. This book redresses this lacuna by drawing together groundbreaking theorizing of the imagination from a diverse range of fields including social theory, history, philosophy, and technology studies, which have not been previously considered systematically in the study of finance—most notably the works of Benedict Anderson and Cornelius Castoriadis.

My argument is that, as we are increasingly impatient with capitalism’s future promises, our imagination becomes more and more speculative in nature, ranging from our choices of partners to our choices of government. At the same time, speculative imagination determines our capacity to hedge ourselves against future uncertainty and broken promises surrounding work security, home ownership, and life fulfillment. Speculative communities, in that sense, are formed around neither calculating reason nor irrational passions—they are propped up by the spirit of finance, which fuses logic and feeling into a generative speculative imagination. The proposal I advance, then, is not about reclaiming a positive social imagination of finance, from which it has strayed away because of its unhinged speculative impulse. My framing aims to illuminate conceptually broader circuits of power that have not yet been adequately studied. Most vitally, the capacity of finance not only to cleave, fragment, and oppress but also to generate connections among marginalized dwellers of speculative communities and, in doing so, to unwittingly afford new political possibilities.