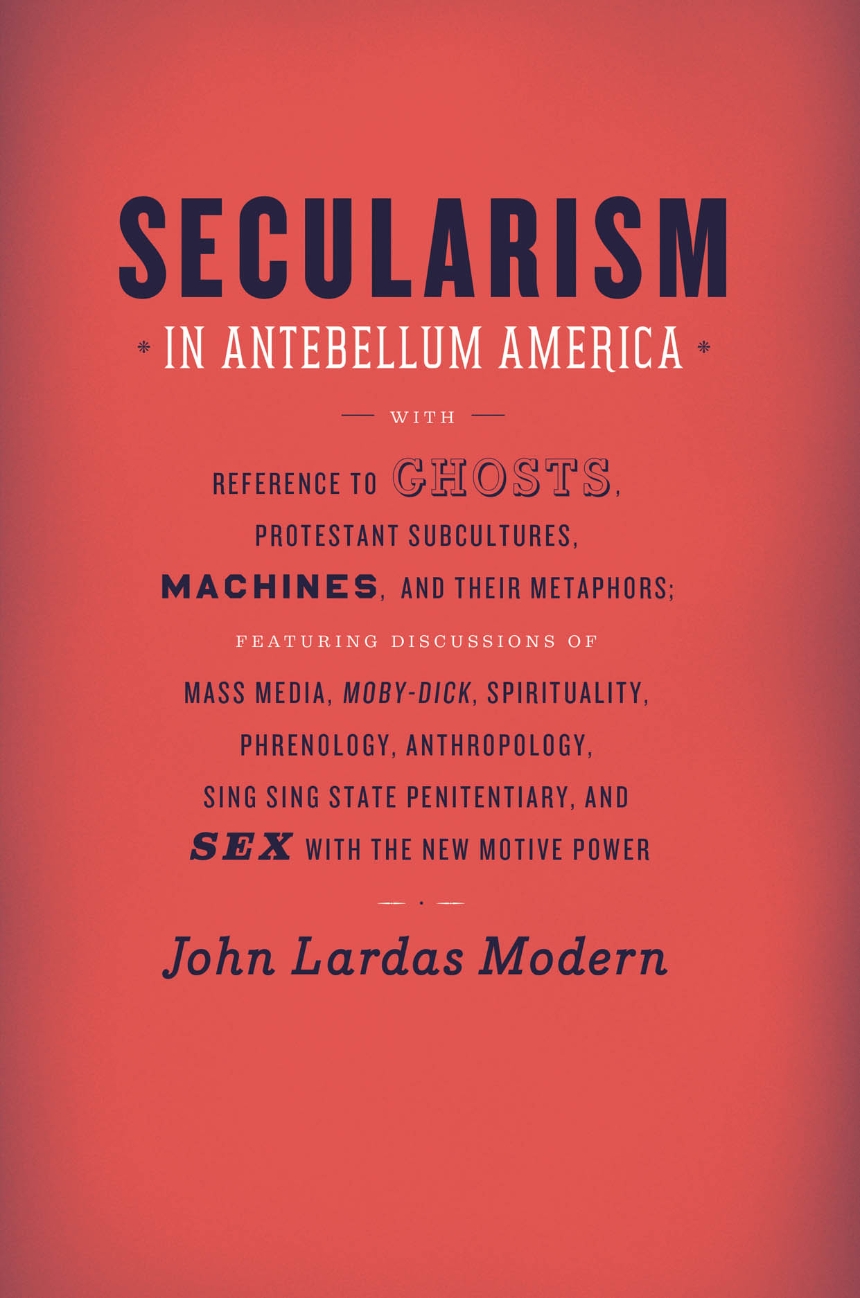 Ghosts. Railroads. Sing Sing. Sex machines. These are just a few of the phenomena that appear in John Lardas Modern’s pioneering account of religion and society in nineteenth-century America. This book uncovers surprising connections between secular ideology and the rise of technologies that opened up new ways of being religious. Exploring the eruptions of religion in New York’s penny presses, the budding fields of anthropology and phrenology, and Moby-Dick, Modern challenges the strict separation between the religious and the secular that remains integral to discussions about religion today.

“A creative challenge to standard religious histories of the period.”

“A luminous study of the discursive terrain and affective engagements of secularism in the first half of the nineteenth century. . . . Modern’s book expands critical methods for approaching style no less than it provides an enlightening and frankly engrossing articulation of the elusive but powerful force that is secularism in United States culture, past and present.”

“The line between opaque and evocative is a fine one, and John Lardas Modern walks it with dark delight in these ruminations on modernity, circa 1851.”

“Modern thoroughly executes the thesis laid out in the book’s introduction, offering a refreshing treatise on historiography of American religion through textual analysis and theoretical employment.”

“Modern proffers a trenchant argument about the myriad contours of religiosity and secularism in nineteenth-century America. He provides a metanarrative for understanding the multivalence of antebellum religion and how the practices of Protestant Christianity were framed and informed by secularism. He not only expands our understanding of antebellum Protestantism but also thoroughly interrogates the prevailing historiography to present a startling and cogent statement about secularism and modernity in Victorian America. This short review cannot do justice to his sagacity. The systematic labyrinth delineated in this book encompasses several lines of inquiry for others to haunt and be haunted by.”

"Secularism in Antebellum America is a rich, densely theoretical account of scenes of American religious life and a powerful critique of how much religious history is done.”

"Modern combines ponderous research, fascinating vignettes, and depth of insight to create an argument that is equal parts exciting and challenging. His deft and critical handling of agency and consciousness offers a compelling model for history, religious or otherwise. Secularism in Antebellum America is thoughtfully crafted and subtly argued; historians of antebellum religion would do well to attend to its complexity."

“Secularism in Antebellum America is a capacious intellectual achievement by one of the most original thinkers in religious studies today. It is a model for boldly conceptual and historically compelling scholarship. Its engagement with the field of American religious history, though not always gentle or loving, is best seen as an immanent critique, waged by a scholar trained in the field and eager to move forward its most important conversations.”

“Modern has done something very important in this smart, generous, and beautifully written book. He has shown why and how evangelicals, liberals, and spiritualists, perennial actors on the American religious stage, actors who are often viewed as competitors, even enemies, inhabit the same secular space, now and in the past, and share responsibility for the peculiar and powerful formation that is American religion and politics. We learn how they have together created the taken-for-granted immediacy of ‘true religion’ out of Scottish common sense philosophy and faith in technology, systematicity, and progress, all through a bewildering amount of surveillance, self-culture, and media production. We both recognize and gasp at the strange but always energetic feats of our forbearers and the dangerous circularity of their never-ending networks and feedback loops.”

“Reading Secularism in Antebellum America brings pleasure on many levels, not least in the knowledge that in our age of sound bites, tweets, and branding there remain books this intellectually satisfying and meticulously made. Modern’s commanding, often inspired analyses of penitentiary reform, the primitivist strain in American anthropology, and the beginnings of our preoccupation with spirituality are deft and elegantly rendered. This subtle, substantial, venturesome book raises the stakes for all of us who read and write about American religion.”

“Secularism in Antebellum America transforms our understanding of evangelicalism in the nineteenth century through its meticulous documentation of ideas and lives as well as through its pointed critical commentary on the last thirty years of evangelical history. Imaginative and rewarding, this is an exemplary instance of interdisciplinary historical inquiry. A brilliant, groundbreaking book.”

INTRODUCTION
THE METAPHYSICS OF SECULARISM

CHAPTER 1
EVANGELICAL SECULARISM AND THE MEASURE OF LEVIATHAN

CHAPTER 2
TOWARD A GENEALOGY OF SPIRITUALITY

CHAPTER 4
THE TOUCH OF SECULARISM

EPILOGUE
WHAT DO I LOVE WHEN I LOVE MY MACHINE?