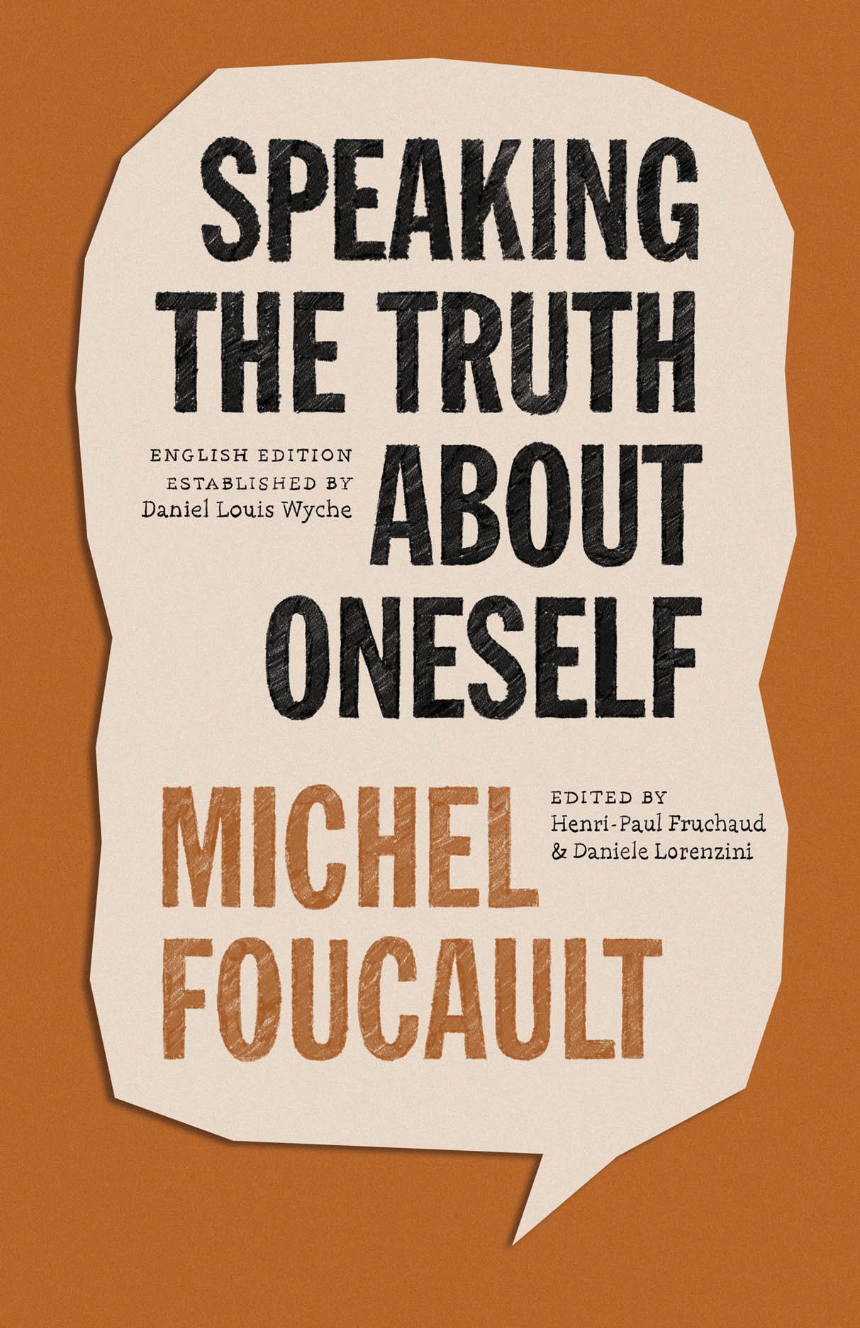 Speaking the Truth about Oneself

Speaking the Truth about Oneself

Edited by Henri-Paul Fruchaud and Daniele Lorenzini
English Edition Established by Daniel Louis Wyche
Now in paperback, this collection of Foucault’s lectures traces the historical formation and contemporary significance of the hermeneutics of the self.

Just before the summer of 1982, French philosopher Michel Foucault gave a series of lectures at Victoria University in Toronto. In these lectures, which were part of his project of writing a genealogy of the modern subject, he is concerned with the care and cultivation of the self, a theme that becomes central to the second, third, and fourth volumes of his History of Sexuality. Foucault had always been interested in the question of how constellations of knowledge and power produce and shape subjects, and in the last phase of his life, he became especially interested not only in how subjects are formed by these forces but in how they ethically constitute themselves.

In this lecture series and accompanying seminar, Foucault focuses on antiquity, starting with classical Greece, the early Roman empire, and concluding with Christian monasticism in the fourth and fifth centuries AD. Foucault traces the development of a new kind of verbal practice—“speaking the truth about oneself”—in which the subject increasingly comes to be defined by its inner thoughts and desires. He deemed this new form of “hermeneutical” subjectivity important not just for historical reasons, but also due to its enduring significance in modern society.

“This is a crucial text in the development of Foucault’s ideas about technologies of the self and the question of parrēsia, especially for his contrast of Greco-Roman antiquity and early Christianity. Particularly notable is that as well as a partial record of his Toronto lectures, this volume also includes a rare record of how he conducted his seminars. Skillfully edited from surviving materials, this is a valuable addition to our understanding of Foucault’s final projects.“

“Lorenzini and Fruchaud’s stunning introduction and annotation of Foucault’s Toronto lectures and seminars offer something wholly unexpected: a new and unique portal onto Foucault’s understanding of what occupied him during his final years—not only a person’s capacity to speak the truth, but a new understanding of how the subject’s acquisition of truth is something much more, an assimilation that transforms the subject herself. The fact that this care of the self is a social act, not an individual one, appears center stage in Foucault’s analysis. This volume is a precious opening for those who have thought themselves already versed in Foucault’s work and for those newly seeking a way to think with him.”

“These newly recovered lectures and seminars constitute an important chapter in Foucault’s work on what he called ‘the history of subjectivity in the West.’ They show Foucault poring over the details of texts from classical antiquity so as to describe how the philosophical schools that flourished at the height of the Roman Empire produced distinctive practices of self-examination and self-cultivation. He thereby expands our sense of the possible relations among truth, speech, desire, and the self. The seminars in particular cast new light on Foucault’s late work on sexuality, parrēsia, and early Christianity.”

“These lectures and seminars come at a critical juncture in Foucault’s work on the making of the subject: they bridge Foucault’s interrogation of models of self-care and self-knowledge with his final work on truth-telling. Sprawling across pedagogy, spiritual combat, friendship, and therapeutic practices, these social relationships differently mediate between inner experience and external context. Learning, unlearning, struggle, critique—all serve as different technologies used in forging the truth-telling and self-knowledge of individuals in their relation to rule. A brilliant volume that unusually highlights Foucault thinking aloud in the classroom.”

"In Speaking the Truth about Oneself, Fruchaud and Lorenzini deliver a highly readable set of lectures Foucault delivered in English at Victoria University (Toronto) in 1982, just two years prior to his untimely passing, lectures that are pivotal in connecting the vertices of Foucault's triangle: the will to know, the obligation to confess, and care of the self. Drawing on unpublished notes, audio recordings, and student notes, which, in some cases, Foucault himself corrected, the editors have erected an important
monument to Foucault's continuing relevance."

Introduction
Henri-Paul Fruchaud and Daniele Lorenzini, translated by Daniel Louis Wyche
Note on the Reconstruction of the Text
List of Abbreviations of Works by Michel Foucault

Lecture I The Technology of the Self