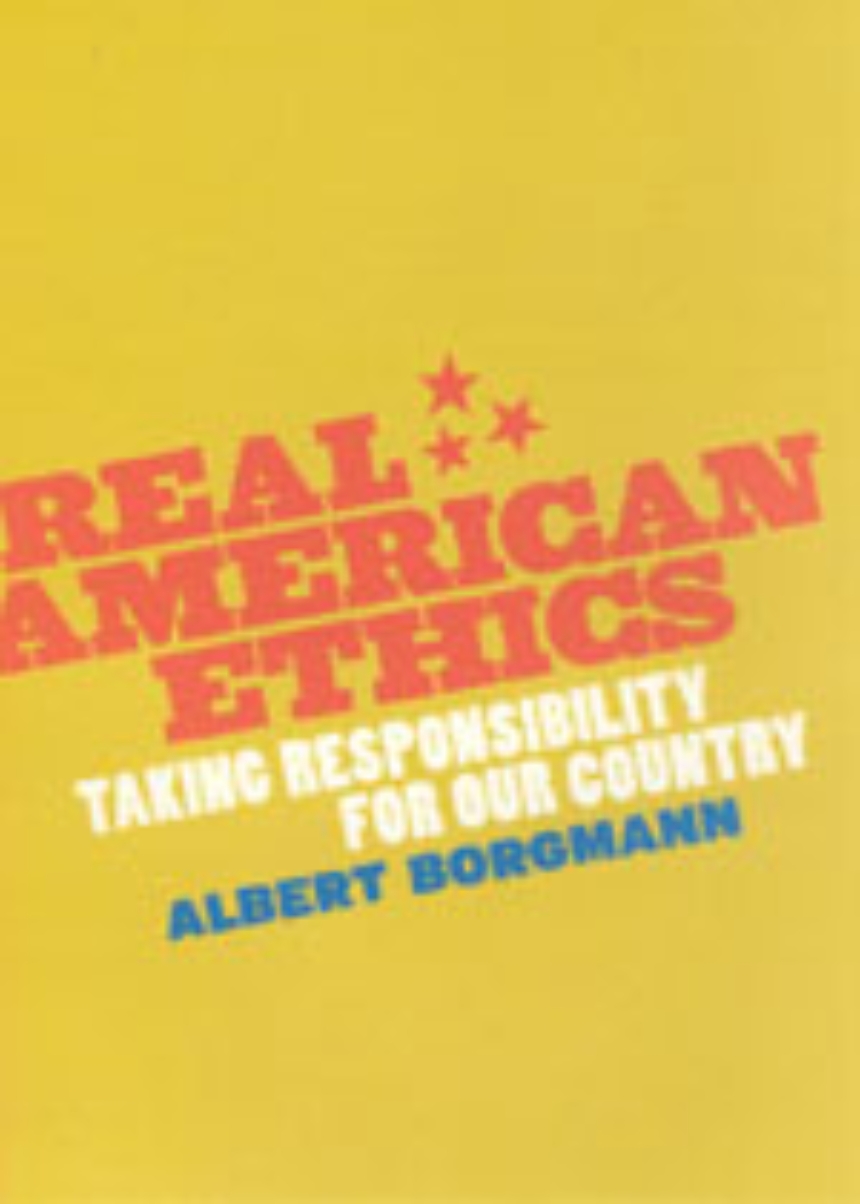 Taking Responsibility for Our Country

Taking Responsibility for Our Country

America is a wonderful and magnificent country that affords its citizens the broadest freedoms and the greatest prosperity in the world. But it also has its share of warts. It is embroiled in a war that many of its citizens consider unjust and even illegal. It continues to ravage the natural environment and ignore poverty both at home and abroad, and its culture is increasingly driven by materialism and consumerism. But America, for better or for worse, is still a nation that we have built. So why then, asks Albert Borgmann in this most timely and urgent work, are we failing to take responsibility for it?

In Real American Ethics, Borgmann asks us to reevaluate our role in the making of American values. Taking his cue from Winston Churchill—who once observed that we shape our buildings, and then our buildings shape us—Borgmann considers the power of our most enduring institutions and the condition of our present moral makeup to propose inspired new ways in which we, as ordinary citizens, can act to improve our country. This, he shows, includes everything from where we choose to live and what we spend our money on to daunting tasks like the reshaping of our cities—habits and actions that can guide us to more accomplished and virtuous lives. Using prose that is easy and direct throughout, Borgmann’s position is grounded neither by conservative nor liberal ideology, but in his understanding that he is a devoted citizen among many.

In an age in which the blame game is the only game in town, this patriotic book is an eloquent reminder of the political strength we all wield when we work together.

“Real American Ethics is original and truly impressive. In many ways it is a summation of Albert Borgmann’s lifetime project, with the emphasis on a philosophy and ethics that is neither liberal nor conservative but instead invested in a concrete reality and human satisfaction. His understanding that consumerism is the great enemy of reality in our time is profound, nonideological, and deeply helpful to any readers concerned not only about their country, but about their own lives.”--Bill McKibben

“The key word in the title of Albert Borgmann’s new book is ‘real.’ He shows us how an increasing tendency for Americans to live in a virtual world undermines our very understanding of ethical responsibility. In a dangerous world and an often unhappy society we need to face reality (or ‘get real’ as current jargon would put it) if we are to do the right thing. Reading this book can be a major step in the right direction.”

"This delightful reflection on American ethics has a double appeal. On the one hand is Borgmann’s clear articulation of the predominant Kantian theoretical base and the desire for a workable practical ethics. On the other is his incisive criticism of the way ethical theory and practical ethics misses the heart of the American enterprise. . . . Highly recommened."

6 The Pursuit of Happiness

13 The Economy of the Household

14 The Design of Public Space