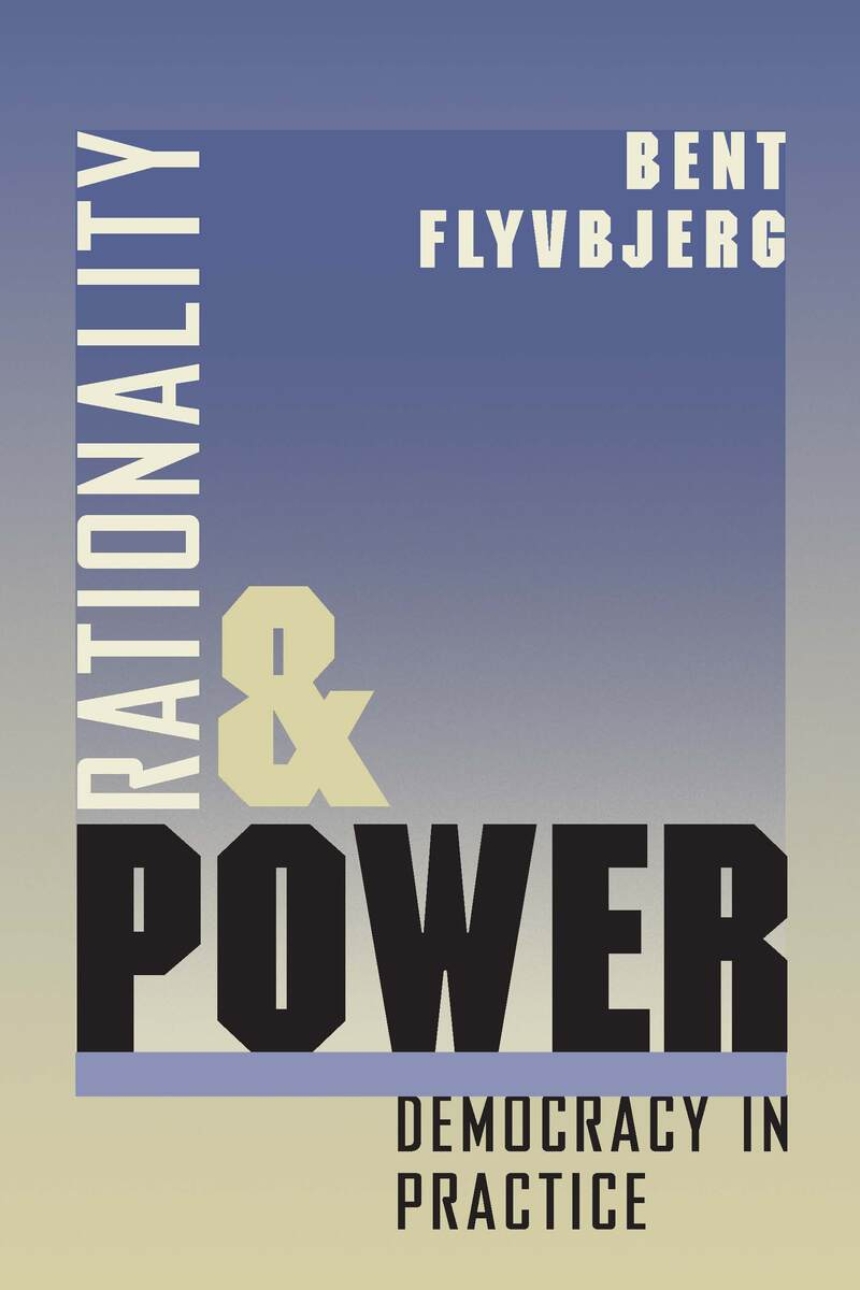 Translated by Steven Sampson
"It’s like the story of Little Town," an influential actor says in Rationality and Power when choosing a metaphor to describe how he manipulated rationality to gain power, "The bell ringer . . . has to set the church clock. So he calls the telephone exchange and asks what time it is, and the telephone operator looks out the window towards the church clock and says, ’It’s five o’clock.’ ’Good,’ says the bell ringer, ’then my clock is correct.’"

In the Enlightenment tradition, rationality is considered well-defined, independent of context; we know what rationality is, and its meaning is constant across time and space. Bent Flyvbjerg shows that rationality is context-dependent and that the crucial context is determined by decision-makers’ power. Power blurs the dividing line between rationality and rationalization. The result is a rationality that is often as imaginary as the time in Little Town, yet with very real social and environmental consequences.

Flyvbjerg takes us behind the scenes to uncover the real politics—and real rationality—of policy-making, administration, and planning in an internationally acclaimed project for environmental improvement, auto traffic reduction, land use, and urban renewal. The action takes place in the Danish city of Aalborg, but it could be anywhere. Aalborg is to Flyvbjerg what Florence was to Machiavelli: a laboratory for understanding power and what it means for our more general concerns of social and political organization. Policy-making, administration, and planning are examined in ways that allow a rare, in-depth understanding. The reader is a firsthand witness to the classic, endless drama that defines what democracy and modernity are, and what they can be.

The result is a fascinating narrative that is both concrete and general, current and timeless. Drawing on the ideas of Machiavelli, Nietzsche, Foucault, and Habermas, Flyvbjerg reads the Aalborg case as a metaphor of modernity and of modern politics, administration, and planning. Flyvbjerg uncovers the interplay of power and rationality that distorts policy deliberation. He demonstrates that modern "rationality" is but an ideal when confronted with the real rationalities involved in decision making by central actors in government, economy, and civil society. Flyvbjerg then elaborates on how this problem can be dealt with so that more fruitful deliberation and action can occur.

If the new millennium marks a recurrence of the real, Flyvbjerg’s Rationality and Power epitomizes this development, setting new standards for social and political inquiry. Richly informed, powerfully argued, and clearly written, this is a book that no one trying to understand policy-making, administration, and planning can afford to overlook.

"Flyvbjerg employs a wide-ranging intellect, an enthusiastic and persuasive voice, academic rigor, and great discipline to distill years of research into an outstanding and accessible 250-page civics lesson. It begs for a readership outside academic and professional circles . . . Rationality and Power’s value is undeniable as a handbook and forensic tool for anyone seeking a better understanding of and access to the democratic process."—Arkansas Democrat-Gazette

"It makes an extremely strong, and to the reviewer’s mind incontrovertible, argument for placing the analysis of planning within the context of power relations. As a result it will also make a significant mark on the development of planning theory."—Geographical Journal

"A book that is to be recommended doubly, first to all those engaged in planning and implementation in a democratic context, and also to all those interested in empirical power research. Rationality and Power is rewarding even enthralling reading, a seminal contribution to its field."—European Societies

"This book is a must for anyone interested in how planning works . . . a reality shock . . . excellent and illuminating."—International Planning Studies

Preface
Map of Downtown Aalborg
1: In Some Remote Corner of the Universe
2: The Aalborg Project
3: Bacon and Nietzsche Come to Northern Jutland
4: Power Defines Reality
5: Rationality as Frozen Politics
6: The Rationality of Resistance
7: The Weakness of the Better Argument
8: The Longue Duree of Power
9: Rationality in the Context of Power
10: Interpretation over Truth
11: Antagonistic Reactions at Play
12: Farewell to Reason
13: The Dream Plan
14: Knowledge Kills Action
15: Minutiae Matter
16: Myths Die Hard
17: Exit the Innovators
18: A Single Drama...with an Endless Play of Dominations
19: Reality Check
20: Power Has a Rationality That Rationality Does Not Know
Postscript
App. A: Main Actors in the Aalborg Project
App. B: Chronology of the Aalborg Project
App. C: Elements in the Original Aalborg Project
Notes
Index