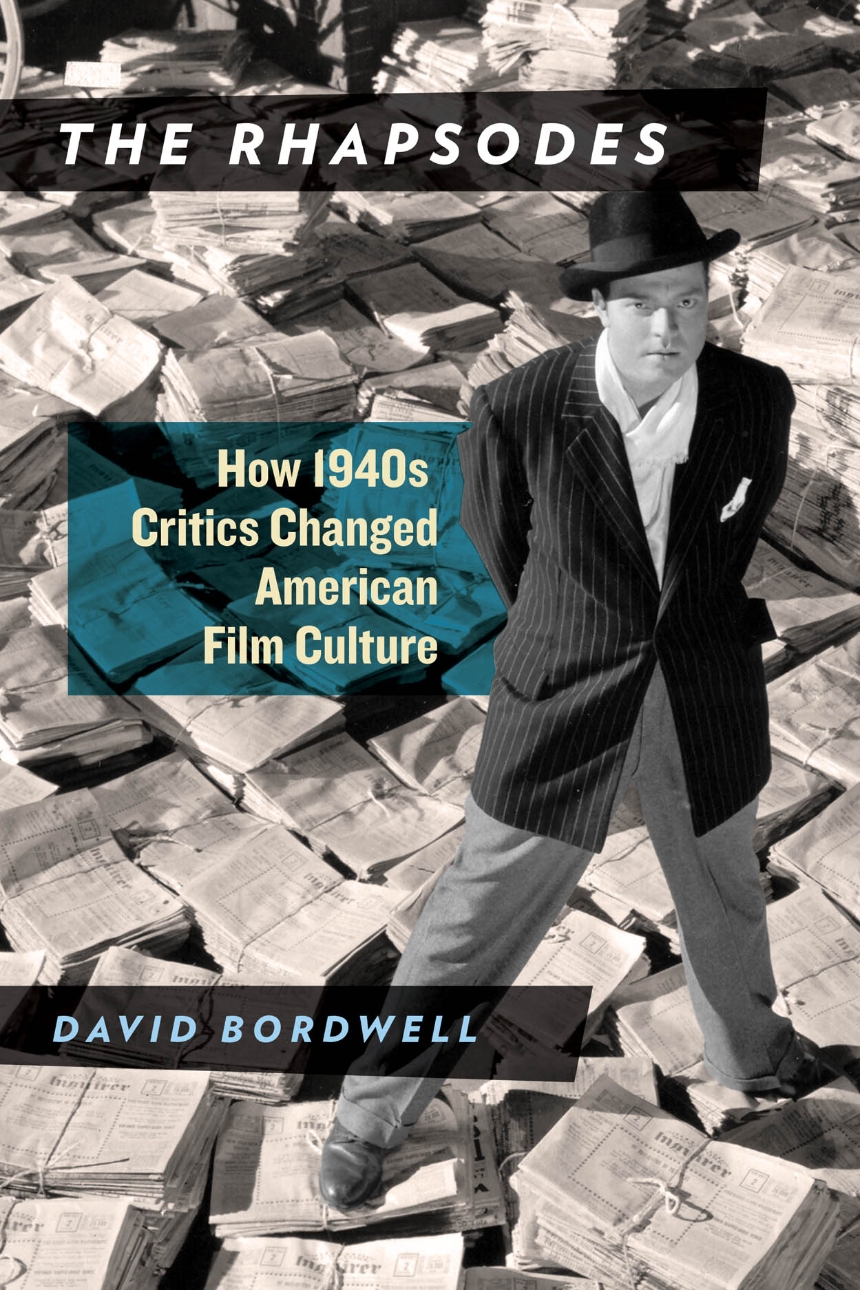 Pauline Kael, Andrew Sarris, and Roger Ebert were three of America’s most revered and widely read film critics, more famous than many of the movies they wrote about. But their remarkable contributions to the burgeoning American film criticism of the 1960s and beyond were deeply influenced by four earlier critics: Otis Ferguson, James Agee, Manny Farber, and Parker Tyler. Throughout the 1930s and ’40s, Ferguson, Agee, Farber, and Tyler scrutinized what was on the screen with an intensity not previously seen in popular reviewing. Although largely ignored by the arts media of the day, they honed the sort of serious discussion of films that would be made popular decades later by Kael, Sarris, Ebert and their contemporaries.

With The Rhapsodes, renowned film scholar and critic David Bordwell—an heir to both those legacies—restores to a wider audience the work of Ferguson, Agee, Farber, and Tyler, critics he calls the “Rhapsodes” for the passionate and deliberately offbeat nature of their vernacular prose. Each broke with prevailing currents in criticism in order to find new ways to talk about the popular films that contemporaries often saw at best as trivial, at worst as a betrayal of art. Ferguson saw in Hollywood an engaging, adroit mode of popular storytelling. Agee sought in cinema the lyrical epiphanies found in romantic poetry. Farber, trained as a painter, brought a pictorial intelligence to bear on film. A surrealist, Tyler treated classic Hollywood as a collective hallucination that invited both audience and critic to find moments of subversive pleasure. With his customary clarity and brio, Bordwell takes readers through the relevant cultural and critical landscape and considers the critics’ writing styles, their conceptions of films, and their quarrels. He concludes by examining the profound impact of Ferguson, Agee, Farber, and Tyler on later generations of film writers.

The Rhapsodes allows readers to rediscover these remarkable critics who broke with convention to capture what they found moving, artful, or disappointing in classic Hollywood cinema and explores their robust—and continuing—influence.

“Bordwell pinpoints a time in movie history when a whole new dialogue was opened up between viewers and filmmakers, and he does it with a deep love of not just pictures, but, especially, of words. The writing floats and bounces, there’s jaunt and inspiration here, as good as the best work of the critics he writes about.”

“In this wonderfully engaging history, Bordwell looks at the DNA of American film criticism to show how four film-lovers-turned-movie-critics helped lead a revolution in contemporary thought. Going wide and deep, with expressive detail and unforced historical sweep, Bordwell shows how the four men he calls the Rhapsodes—Otis Ferguson, James Agee, Manny Farber and Parker Tyler— by taking movies seriously (if rarely themselves), made an argument for the movies that demolished old high-low snobberies and ushered in a new age of cinephilia. Bordwell, one of our greatest film historians and theorists, proves yet again that he’s also one of our greatest critics.”

"This marvelously readable, refreshing book is both enlightening and hugely entertaining. Bordwell, our preeminent bridge between scrupulous film scholarship and lively, accessible prose style, has outdone himself with this much-needed study of four pioneering film critics. Most impressive is the generous spirit with which he appreciates the characteristics and virtues of each writer, who are very different one from another (and from himself), while simultaneously setting their accomplishments in a broader context of the history of American criticism and popular taste. In doing so, he shows he is their peer as well as their grateful inheritor."

Bordwell pays homage to a generation of critics lost to time and reintroduces them to a modern audience—those who read this book will be grateful.”

“Illuminating. . . . Bordwell probes each critic’s work and shows how they took mainstream Hollywood film, and writing about it, seriously.”

“The Rhapsodes is imminently readable, a slim volume that slips in your backpack just as easily as it slips into serious film discourse.”

“If you have a driving or even just a drive-by interest in arts criticism, film writing and the love we share for all kinds of movies, The Rhapsodes is a swift, terrific read.”

“The primary pleasure of this book comes from Bordwell’s appreciation of the originality of these writers, the way each of them constructed a distinctive prose whose mixing of unlike elements calls to mind that homemade world that the critic Hugh Kenner discerned in the poetry of William Carlos Williams and Wallace Stevens. There is real enthusiasm, and valuable guidance, in Bordwell’s tour, as he plucks out particularly lively or audacious passages. He walks us through the literature with an admirably light step, pointing out highlights and connecting dots, and, as he goes, filling in some of the background of the 1940s intellectual milieu in which these men worked. . . . The Rhapsodes elicits an awareness of just how much expressive energy was pouring out on the movie screens of America in pictures that many continued to regard as disposable time killers.”

“While each of the subjects of The Rhapsodes has come in for their appreciation in turn at one time or another, Bordwell’s unique accomplishment is to situate them within the larger context of American arts journalism. . . . As one reasonably well-acquainted with all of Bordwell’s Rhapsodes, much information here was new to me. . . . There are also Bordwell’s typically lucid close reads of each writer’s idiosyncratic style. . . . This slim volume is worth an even dozen critic memoirs—and in recounting Ferguson’s call to arms for a film criticism worthy of its subject, it sounds a reveille of its own.”

“In The Rhapsodes, [Bordwell’s] applied his sharp analytic eye not just to the arguments put forth by his four subjects but also—and this may be the most fun part of the book—to their prose.”

“Highly entertaining. . . . [Bordwell] is equally attentive to the four writers’ idiosyncratic prose styles and to the strategies they used to argue that mainstream movies were an art form worthy of serious study.”

"The Rhapsodes, besides being a pleasure to read, makes a sophisticated contribution to the study of film criticism."

Introduction: The Film Critic as Superstar