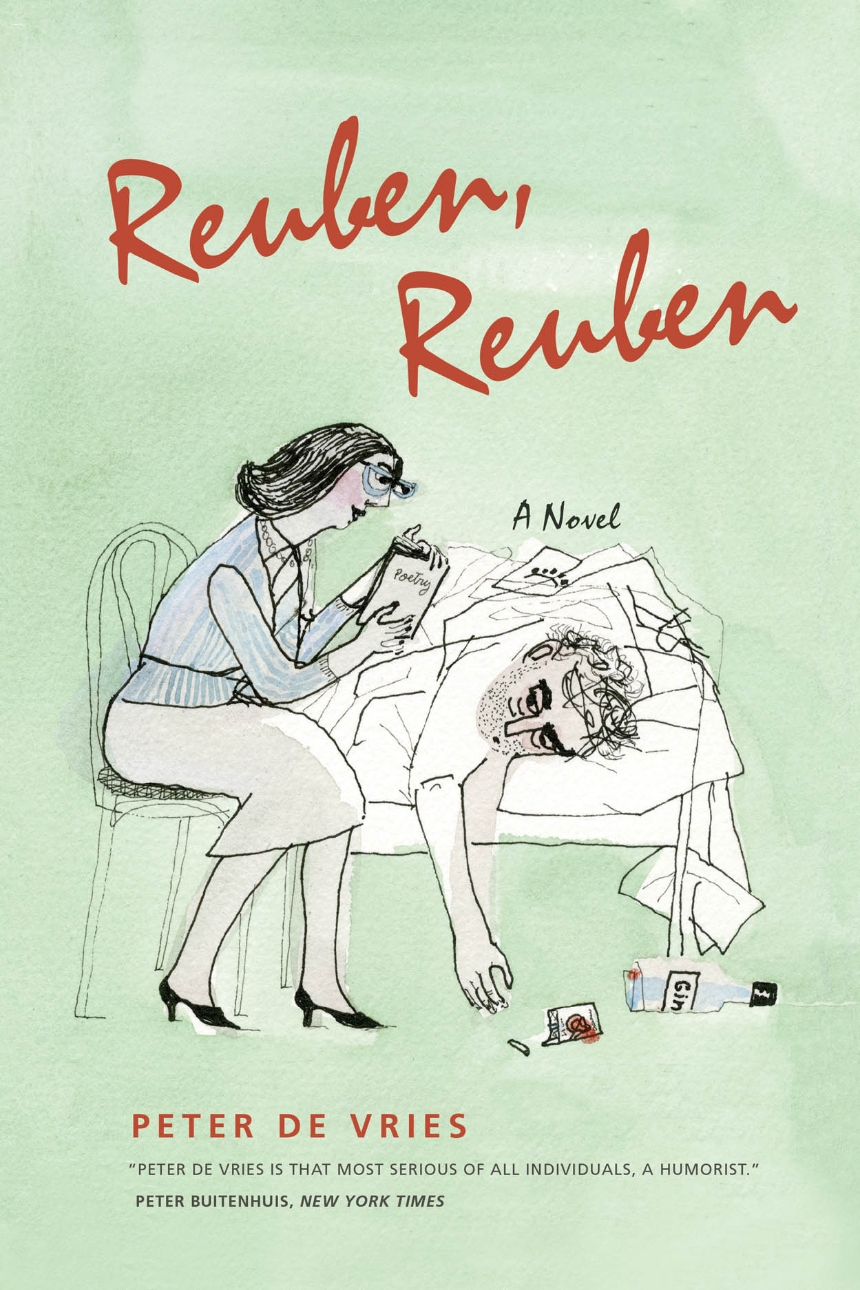 Harking from the golden age of fiction set in American suburbia—the school of John Updike and Cheever—this work from the great American humorist Peter De Vries looks with laughter upon its lawns, its cocktails, and its slightly unreal feeling of comfort. A manic epic, Reuben, Reuben is really three books in one, tied together by a 1950s suburban Connecticut setting and hyper-literate cast of characters. A corruptible chicken farmer fearful for the fate of his beloved town, a womanizing poet from Wales (Dylan Thomas in disguise), and a hapless British poet-cum-actor-and-agent all take turns as narrator, revealing different, even conflicting views. But alcoholism, sexism, small-mindedness, and calamity challenge the high spirits of De Vries’s well-read suburbanites. Noted as much for his verbal fluidity and wordplay as for his ability to see humor through pain, De Vries will delight both new readers and old in this uproarious modern masterpiece.

“De Vries is that most serious of all individuals, a humorist. With a devilish eye and a merciless skill, he has chronicled the excesses, fantasies, and absurdities of the land of exurbia, particularly that strip of it that stretches along the Connecticut shore east of New York. He has made the region glow on the literary map as if it were illuminated by the phosphorescence of its own decay.”

“De Vries’s new novel, Reuben, Reuben, is his longest, his most ambitious, and his best. . . . The comedy is still delightful and omnipresent, but the satire is more important and deadly serious.”

“The funniest serious writer to be found on either side of the Atlantic.”

“A trio of long out-of-print books, republished this fall by the University of Chicago Press, underscores the satirical brilliance of a mostly forgotten humorist. De Vries skewered a distinctly male form of idiocy, demonstrated by characters who are witty, well-spoken, and lacking what a later generation would call emotional intelligence.”

“De Vries was an editor at Poetry magazine, a staff writer at The New Yorker, and the author of some two dozen of the wittiest novels you’ll ever read, including the masterworks The Blood of the Lamb and Slouching Toward Kalamazoo, as well as The Tunnel of Love and Reuben, Reuben, just resurrected in handsome paperback by the University of Chicago Press. . . . A goulash of one-liners does not a novel make, and part of De Vries’s vitalizing talent lies in his storytelling efficiency, his deft command of narrative form. Told, with Rashomon effect, from three wildly distinct points of view—a scheming chicken farmer, a Welsh rake who might be Dylan Thomas, and an incompetent British actor—Reuben, Reuben excavates the suburban eccentricities of 1950s Connecticut. . . . Only those with a consummate lack of cleverness wield the word ‘clever’ as an insult, and De Vries demonstrates just how much can be done with a creative intelligence charged by the clever and satirical and ironic. Let us now praise those saints at the University of Chicago Press who possess the smarts and good taste to return to print a peerless American maestro of wit.”

“A decade ago, the off-kilter universe created by Peter De Vries was almost forgotten—his work out of print, relegated to the shelves and Web sites of antiquarian booksellers. But thanks to the University of Chicago Press, which has reissued attractive paperback editions of five of his books so far, the emergency is over. . . . Reuben, Reuben . . . reads at times like a comic masterpiece coated in despair. . . . The longest De Vries novel, it was as if another sensibility had taken charge. . . . There are elements of a plot, although this one is more disturbing and includes a suicide, a miscarriage, and horrific encounters between McGland and his dentists. . . . Because it’s De Vries, you’ll find Groucho-like dialogue—‘‘You can’t resist a pretty ankle, can you, Frank’ Ella says, and I says, ‘I’ve got my mind on higher things’’—and puns: ‘Malady of our time. Infectious mammanucleosis.’ . . . But darkness and doubt keep encroaching. Even Spofford falls under the spell of melancholia: ‘I slip into the shadows, there to remain a minor character in action I have precipitated. Others will come after me, in this unending rigamarole which is Life anyway.’ The shadows by then were De Vries’s real subject.”

“Quick with quips so droll and witty, so penetrating and precise that you almost don’t feel them piercing your pretensions, Peter De Vries was perhaps America’s best comic novelist not named Mark Twain. . . . It’s something of a crime against literature that De Vries, whose novels of the 1950s and early ’60s made wonderful sport of postwar striving, the middle-class move to the suburbs, and generational clashes that would render major cultural shifts just a few years hence, has mostly been forgotten. His 1964 masterpiece, Reuben, Reuben is nothing less than a satiric time capsule of the so-called Mad Men generation, a look at what your square older siblings were up to when you hit the road like Jack Kerouac and wound up in the Haight. Literature—in the form of the University of Chicago Press—is making amends for its lapses by re-issuing the best of De Vries’ works, five comic tomes long out of print.”