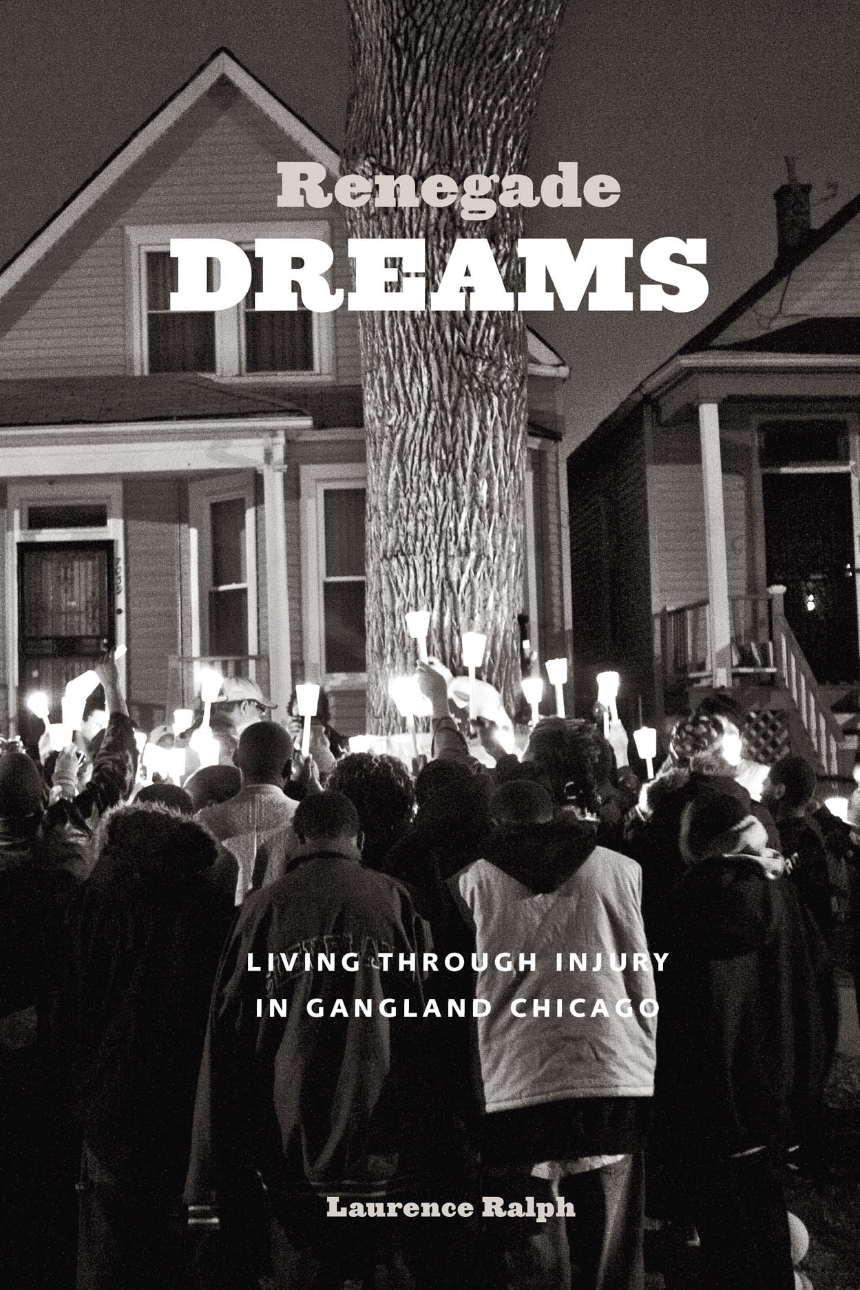 Living through Injury in Gangland Chicago

Living through Injury in Gangland Chicago

Every morning Chicagoans wake up to the same stark headlines that read like some macabre score: “13 shot, 4 dead overnight across the city,” and nearly every morning the same elision occurs: what of the nine other victims? As with war, much of our focus on inner-city violence is on the death toll, but the reality is that far more victims live to see another day and must cope with their injuries—both physical and psychological—for the rest of their lives. Renegade Dreams is their story. Walking the streets of one of Chicago’s most violent neighborhoods—where the local gang has been active for more than fifty years—Laurence Ralph talks with people whose lives are irrecoverably damaged, seeking to understand how they cope and how they can be better helped.

Going deep into a West Side neighborhood most Chicagoans only know from news reports—a place where children have been shot just for crossing the wrong street—Ralph unearths the fragile humanity that fights to stay alive there, to thrive, against all odds. He talks to mothers, grandmothers, and pastors, to activists and gang leaders, to the maimed and the hopeful, to aspiring rappers, athletes, or those who simply want safe passage to school or a steady job. Gangland Chicago, he shows, is as complicated as ever. It’s not just a warzone but a community, a place where people’s dreams are projected against the backdrop of unemployment, dilapidated housing, incarceration, addiction, and disease, the many hallmarks of urban poverty that harden like so many scars in their lives. Recounting their stories, he wrestles with what it means to be an outsider in a place like this, whether or not his attempt to understand, to help, might not in fact inflict its own damage. Ultimately he shows that the many injuries these people carry—like dreams—are a crucial form of resilience, and that we should all think about the ghetto differently, not as an abandoned island of unmitigated violence and its helpless victims but as a neighborhood, full of homes, as a part of the larger society in which we all live, together, among one another.
Read an excerpt "Nostalgia, or the Stories a Gang Tells about Itself".

“Although it lacks the easy narrative of many traditional ethnographies, this is precisely the book’s strength. There is no convenient valorisation of the ordinary extraordinariness of the lives portrayed here. Their dreams are shown to be chaotic, complex and contradictory. Just like life in ‘Eastwood.’”

“Too many scholarly and popular takes on African Americans’ lives and life chances are predicated on assumptions about cultural inadequacies or even genetic inferiorities, on the idea that black people all around the world are little more than damaged goods—to be pitied or punished.] Ralph’s thought-provoking book wonderfully demonstrates how and why human beings continue to survive—and even thrive—in the face of incessant injury and attack. His Chicago is peopled by characters we’ve seen before (gangstas and grandmas, old heads and youth workers, pastors and principals, activists and addicts), but they breathe and bounce throughout his pages like more than just rehashed stock figures in some ongoing morality play about urban black pathology.  Thoroughly researched and powerfully told, Renegade Dreams is a paradigm-shifting anthropological rejoinder to popular stereotypes and scholarly cant about ‘inner-city violence,’ its causes, and its aftermath.”

“Astounding in its clarity and groundbreaking in its power, Renegade Dreams is as miraculous as the efforts of its all-American characters to remake life and invent a future out of injury. The textures and rhythms of Ralph’s realist narrative are charged with critical insight and transcendental significance, making ethnography into a work of art.”

João Biehl, author of Vita: Life in a Zone of Social Abandonment

“In Renegade Dreams, Ralph has achieved what few ethnographers, investigative journalists, and drive-by sociologists ever do: a radical empathy for his subjects that refuses to impose a colonial worldview. At the heart of this book is a fierce utopian sensibility expressed by the dogged optimism of Chicago residents—felled by bullets and injured in a thousand ways—but who insist on participating in our aspiration society. Young men in wheelchairs, bodies half-dead, glide like rolling zombies in our mind’s eye and yet leap from these pages with life and vigor. Their dreams carry forth in politics, play, poetry, and prose. They live in defiance of statistical narratives of the violent isolated ghetto. Theoretically rich and superbly written, this book exposes what is hidden in plain sight: the full humanity of people whose lives are greater than the sum of their pain and peril and far more connected to ours than we’d like to believe.”

Khalil Gibran Muhammad, author of The Condemnation of Blackness: Race, Crime, and the Making of Modern Urban America

“Renegade Dreams is a tour de force—extremely well written and engaging, and replete with original insights. Once I began reading Ralph’s book I had a difficult time putting it down.  His field research is fascinating. And his explicit discussion of the interconnections of inner-city injury with government, community institutions, as well as how it is related to historical and social processes, is a major contribution.”

William Julius Wilson, author of The Truly Disadvantaged: The Inner City, the Underclass, and Public Policy

PART ONE † The Injury of Isolation
INTRODUCTION  ‡  THE  UNDERSIDE OF INJURY OR, HOW TO DREAM LIKE A RENEGADE
Field Notes: Late Death

1 ‡ Development
OR , WHY GRANDMOTHERS  ALLY  WITH THE GANG
Field Notes: early Funerals

2 ‡ Nostalgia
OR, THE STORIES A GANG TELLS ABOUT ITSELF
Field Notes: Inside Jokes

3 ‡ Authenticity
OR, WHY PEOPLE CAN’T LEAVE THE GANG
PART TWO † The Resilience of Dreams
Field Notes: Getting In

5 ‡ Disease
OR, HOW A WILL TO SURVIVE HELPS THE HEALING
Field Notes: Framing

CONCLUSION ‡ THE FRAME
OR, HOW TO GET OUT OF AN ISOLATED SPACE