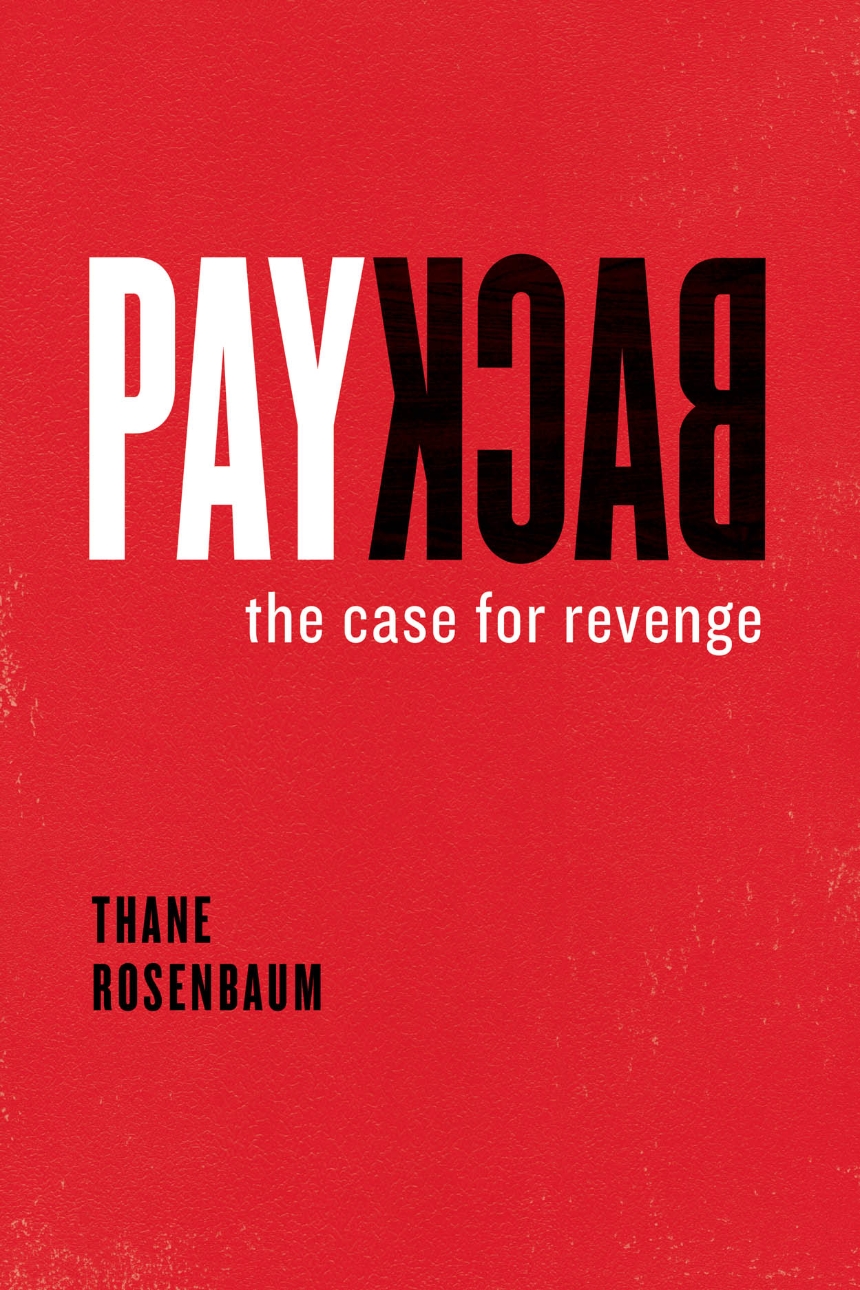 The Case for Revenge

The Case for Revenge

We call it justice—the assassination of Osama bin Laden, the incarceration of corrupt politicians or financiers like Rod Blagojevich and Bernard Madoff, and the climactic slaying of cinema-screen villains by superheroes. But could we not also call it revenge? We are told that revenge is uncivilized and immoral, an impulse that individuals and societies should actively repress and replace with the order and codes of courtroom justice. What, if anything, distinguishes punishment at the hands of the government from a victim’s individual desire for retribution? Are vengeance and justice really so very different? No, answers legal scholar and novelist Thane Rosenbaum in Payback: The Case for Revenge—revenge is, in fact, indistinguishable from justice.
Revenge, Rosenbaum argues, is not the problem. It is, in fact, a perfectly healthy emotion. Instead, the problem is the inadequacy of lawful outlets through which to express it. He mounts a case for legal systems to punish the guilty commensurate with their crimes as part of a societal moral duty to satisfy the needs of victims to feel avenged. Indeed, the legal system would better serve the public if it gave victims the sense that vengeance was being done on their behalf. Drawing on a wide range of support, from recent studies in behavioral psychology and neuroeconomics, to stories of vengeance and justice denied, to revenge practices from around the world, to the way in which revenge tales have permeated popular culture—including Hamlet, The Godfather, and Braveheart—Rosenbaum demonstrates that vengeance needs to be more openly and honestly discussed and lawfully practiced.
Fiercely argued and highly engaging, Payback is a provocative and eye-opening cultural tour of revenge and its rewards—from Shakespeare to The Sopranos. It liberates revenge from its social stigma and proves that vengeance is indeed ours, a perfectly human and acceptable response to moral injury. Rosenbaum deftly persuades us to reconsider a misunderstood subject and, along the way, reinvigorates the debate on the shape of justice in the modern world.

“Because it is often regarded as ‘un-Christian’ revenge has acquired a bad name.  In this incisive analysis, Thane Rosenbaum argues that revenge is a hunger in most injured hearts and the very fundament of our idea of justice. This is a compelling and provocative book, immensely valuable both for its close reasoning and its honesty.”

“This erudite book, which combines the history of our criminal justice system with the most recent headline crime news, is bound to create political and legal controversy because it challenges the sacred cow maintaining that there is no place for revenge, or retribution, in our legal system. Thane Rosenbaum argues persuasively that criminal justice must acknowledge retributive needs if it is to work effectively. Many, including me, will disagree with some of his ideas—especially his contention that victims should have a much larger role in determining the ultimate penalties for those convicted of crimes. But these are vital questions, too often unexamined, and this is a book that opens a much-needed public dialogue.”

Susan Jacoby, author of Wild Justice: The Evolution of Revenge

"Thane Rosenbaum convincingly argues for knocking down the false distinction between justice and revenge, for rescuing revenge from its taboo status."

“Revenge is seldom discussed with seriousness when looking at various formats for the delivery of justice. . . . But it does need to be examined, as Thane Rosenbaum shows in this wide-ranging consideration of revenge as a cultural phenomenon. He specifically targets the comfortable fiction, relied on by so many experts and politicians, that civilized adults can and should rise above such emotions. . . . One of its strengths is its multidisciplinarity, drawing ideas from life, science, literature and history to reflect on recent crimes that have caused real moral dilemmas and perceived failures in justice delivery. It will be recommended reading on quite a few book lists because of this. . . . Payback is worth reading, even if only to disagree with it.”

"One of our most original and compelling thinkers about the law and its limitations, Thane Rosenbaum takes on the theme whose name dare not be spoken in polite circles: revenge. With his singular panache and mastery of sources from Supreme Court cases to popular culture to--gasp--life itself, Rosenbaum takes us on a substantive and stylistic tour de force that leads to the ’shocking’ conclusion that if the law won’t set things right, which it so often fails to do, then it is okay, indeed moral, for us to do so ourselves."

“In this brilliant book, Thane Rosenbaum finds language for what all of us, at one time or another, have felt in our bones—that there is a law higher than those made by legislatures or courts; and that, when evil appears among us, an appropriate response is the oldest: revenge. Independent thinking at its best, Rosenbaum’s fiercely argued text dares to speak truth to cowardice and calls us to understand and accommodate the demand that a punishment fit the crime and that the score be settled in the Chicago Way.”

Rich Cohen, author of The Avengers

"With extensive references to popular culture, literary sources, academic studies, contemporary news events, and actual case law, Thane Rosenbaum develops his arguments and challenges readers to consider vengeance as a moral right and a cure for what ails the current system. He makes a difficult topic accessible and succeeds in asking questions that deserve consideration. Recommended.”

“The book’s disturbing theme is that revenge is an important aspect of justice and should be more prominent in American jurisprudence. Readers may initially be repelled, but Rosenbaum asks them to stick with the book long enough to consider what it would mean if revenge, visceral and personal, were incorporated into the judicial process. . . . The book is cross-cultural, even handed, well sourced. . . and bound to spark heated discussions. Essential.”

Introduction
1 Running away from Revenge
2 Just Deserts
3 The Emotions of Revenge
4 The Science of Mad
5 Why We Punish?
6 Other Cultures and Revenge
7 When Self-Help Is Permissible
8 Release Revenge
Notes
Index