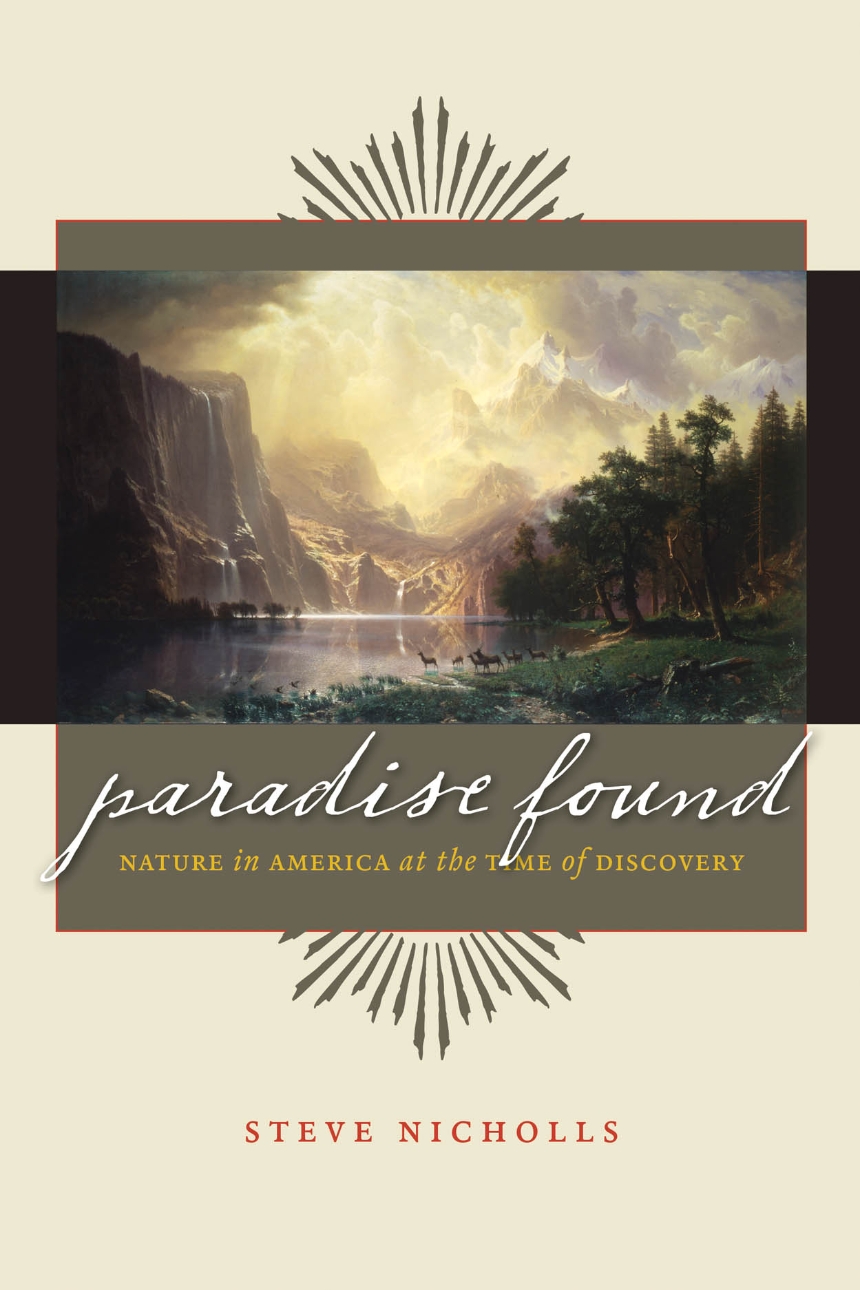 Nature in America at the Time of Discovery

Nature in America at the Time of Discovery

The first Europeans to set foot on North America stood in awe of the natural abundance before them. The skies were filled with birds, seas and rivers teemed with fish, and the forests and grasslands were a hunter’s dream, with populations of game too abundant and diverse to even fathom. It’s no wonder these first settlers thought they had discovered a paradise of sorts. Fortunately for us, they left a legacy of copious records documenting what they saw, and these observations make it possible to craft a far more detailed evocation of North America before its settlement than any other place on the planet.

Here Steve Nicholls brings this spectacular environment back to vivid life, demonstrating with both historical narrative and scientific inquiry just what an amazing place North America was and how it looked when the explorers first found it. The story of the continent’s colonization forms a backdrop to its natural history, which Nicholls explores in chapters on the North Atlantic, the East Coast, the Subtropical Caribbean, the West Coast, Baja California, and the Great Plains. Seamlessly blending firsthand accounts from centuries past with the findings of scientists today, Nicholls also introduces us to a myriad cast of characters who have chronicled the changing landscape, from pre–Revolutionary era settlers to researchers whom he has met in the field.

A director and writer of Emmy Award–winning wildlife documentaries for the Smithsonian Channel, Animal Planet, National Geographic, and PBS, Nicholls deploys a cinematic flair for capturing nature at its most mesmerizing throughout. But Paradise Found is much more than a celebration of what once was: it is also a reminder of how much we have lost along the way and an urgent call to action so future generations are more responsible stewards of the world around them. The result is popular science of the highest order: a book as remarkable as the landscape it recreates and as inspired as the men and women who discovered it.

"While rebuffing the idea that North America was a pristine landscape when the Europeans arrived and accepting that America was a vast land that had been modified by its indigenous inhabitants, wildlife documentary filmmaker and entomologist Nicholls argues that ’nature was far more abundant in the past than anyone really credits.’ Taking us back in time to a natural world blessed with a mind-boggling abundance of wildlife, Nicholls cites, often using secondary sources, firsthand accounts and descriptions of fish, birds, and mammals that inhabited the regions of the North Atlantic, the East Coast, the Subtropical Caribbean, the West Coast, and the Great Plains. He then pairs those stories with the most current scientific research to explain what has happened to this onetime abundance. Nicholls calls for stewardship of the earth’s resources and for today’s citizens to learn the lessons of the past. The chapters are arranged chronologically, and the wealth of detail is staggering."—Library Journal

"Steve Nicholls, in this fine new book, makes an essential point: We should measure the damage to our natural heritage less by counting extinctions, and more by understanding that it is abundance itself that has been drained away. . . .  This is a book worth owning."

"The abundance of nature was what made American independence possible in the first place; our present poverty on so many fronts is a consequence of our maltreatment of that nature. But the knowledge of what we have done, chronicled so carefully in this lucid book, may be the first step toward recovering that squandered wealth."—Gregory McNamee, Washington Post

"Finely written and elegantly researched, Paradise Found is a chilling portent of how even today’s richness will seem a cornucopia to biologically bereft future generations."

"Nicholls’s vividly detailed ecological history analyzes the mind-sets that validate excessive exploitation, the disastrous victory of economics and politics over nature, and the complex and vulnerable dynamics of ecosystems. Not only does Nicholls present arresting material, he also offers fresh interpretations and connections in this grandly spanning and affecting look to the past for guidance in facing a future of further diminishment."—Booklist, starred review

"A cornucopia overflowing with the abundance of nature long gone."

"In an engaging prose style peppered with humor, Nicholls takes readers from Atlantic to Pacific, studying local ecology from historical and personal perspectives, hammering home the warning that, despite appearances, 'Planet Earth is finite.'"

"This intensively referenced, well-written book, which is a combination of history and natural history, will give readers new insights into how North America has changed. Summing Up: Highly recommended. All levels of academic, professional, and general readers."

2 The Discovery of Paradise

6 Angels from the North

12 Islands in the Sea

15 Blessings Fit for the Use of Man