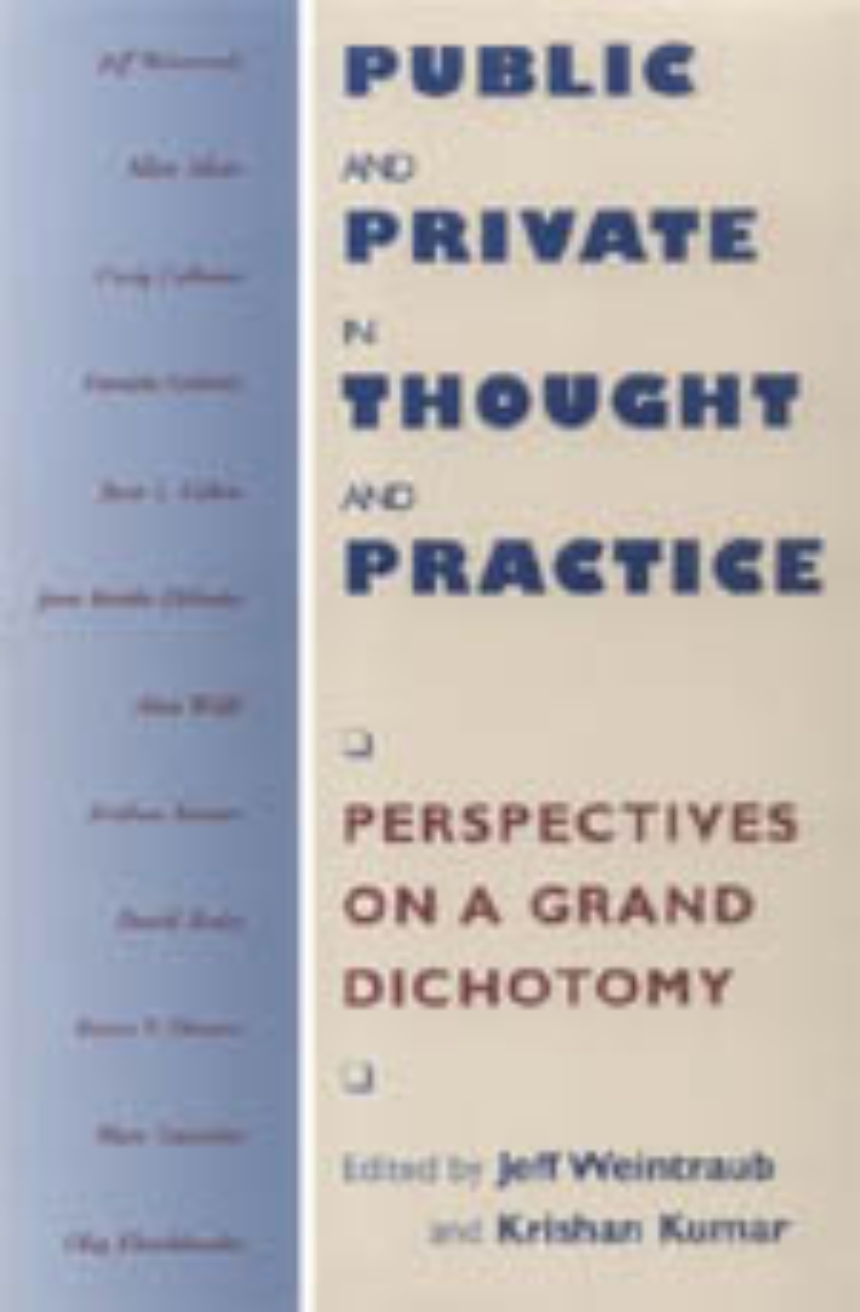 Public and Private in Thought and Practice

Perspectives on a Grand Dichotomy

Public and Private in Thought and Practice

Perspectives on a Grand Dichotomy

These essays, by widely respected scholars in fields ranging from social and political theory to historical sociology and cultural studies, illuminate the significance of the public/private distinction for an increasingly wide range of debates. Commenting on controversies surrounding such issues as abortion rights, identity politics, and the requirements of democratization, many of these essays clarify crucial processes that have shaped the culture and institutions of modern societies.

In contexts ranging from friendship, the family, and personal life to nationalism, democratic citizenship, the role of women in social and political life, and the contrasts between western and (post-)Communist societies, this book brings out the ways the various uses of the public/private distinction are simultaneously distinct and interconnected. Public and Private in Thought and Practice will be of interest to students and scholars in disciplines including politics, law, philosophy, history, sociology, and women’s studies.

About the Contributors
Preface
1: The Theory and Politics of the Public/Private Distinction
Jeff Weintraub
2: "Two Different Sorts of Commerce" - Friendship and Strangership in Civil Society
Allan Silver
3: Nationalism and the Public Sphere
Craig Calhoun
4: Humankind as a System: Private and Public Agency at the Origins of Modern Liberalism
Daniela Gobetti
5: Rethinking Privacy: Autonomy, Identity, and the Abortion Controversy
Jean L. Cohen
6: The Displacement of Politics
Jean Bethke Elshtain
7: Public and Private in Theory and Practice: Some Implications of an Uncertain Boundary
Alan Wolfe
8: Home: The Promise and Predicament of Private Life at the End of the Twentieth Century
Krishan Kumar
9: From Public Housing to Private Communities: The Discipline of Design and the Materialization of the Public/Private Distinction in the Built Environment
David Brain
10: Rediscovering the Social: Visiting Practices in Antebellum New England and the Limits of the Public/Private Dichotomy
Karen V. Hansen
11: The Shadow of the Leviathan: Public and Private in Communist and Post-Communist Society
Marc Garcelon
12: Reveal and Dissimulate: A Genealogy of Private Life in Soviet Russia
Oleg Kharkhordin
Index