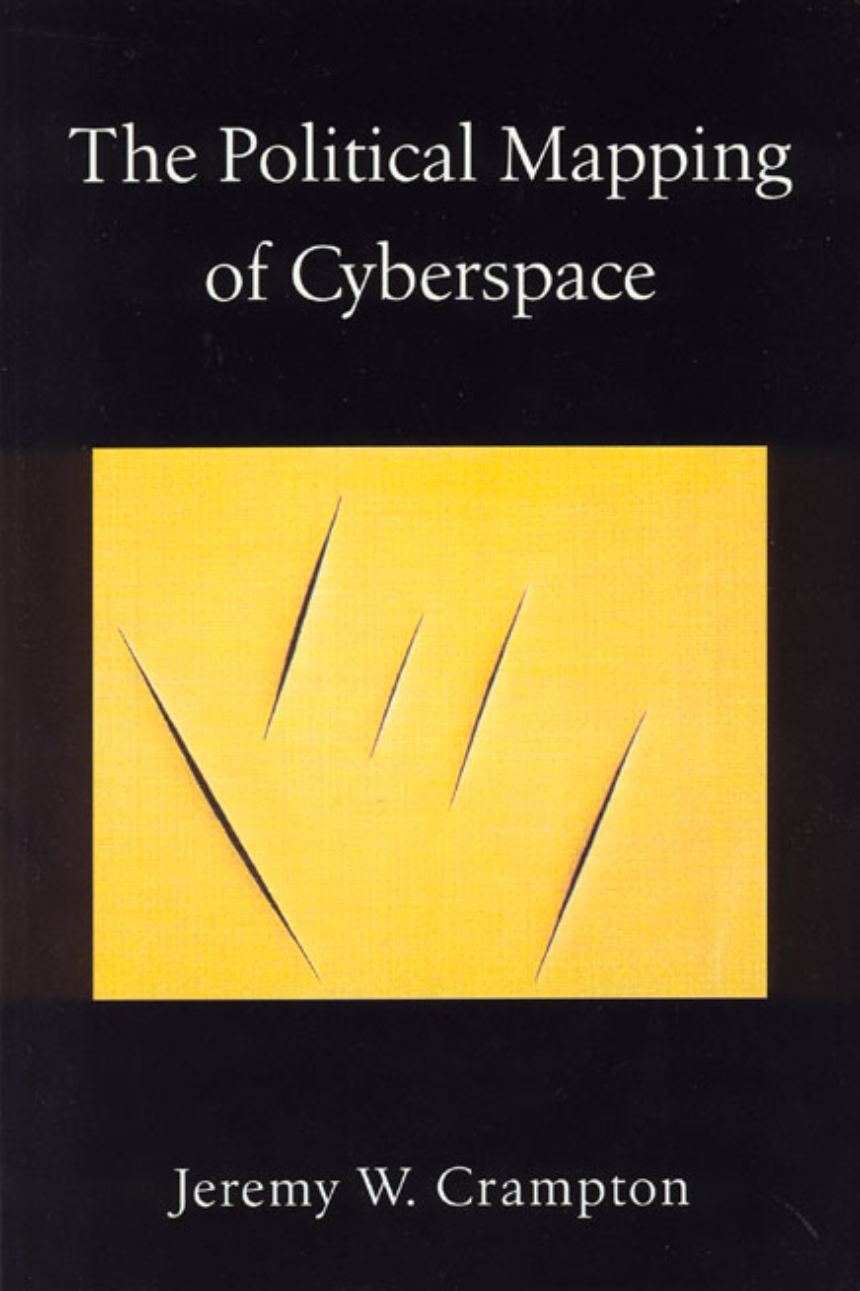 The Political Mapping of Cyberspace

The Political Mapping of Cyberspace

As inherently spatial beings, our sense of space in cyberspace challenges all that is familiar in terms of our ability to define, organize, govern, and map social places. In The Political Mapping of Cyberspace, Jeremy Crampton shows that cyberspace is not the virtual reality we think it to be, but instead a rich geography of political practices and power relations.

Using concepts and methods derived from the work of Michel Foucault, Crampton outlines a new mapping of cyberspace to help define the role of space in virtual worlds and to provide constructive ways in which humans can exist in another spatial dimension. He delineates the critical role maps play in constructing the medium as an object of knowledge and demonstrates that by processes of mapping we come to understand cyberspace. Maps, he argues, shape political thinking about cyberspace, and he deploys in-depth case studies of crime mapping, security maintenance, and geo-surveillance to show how we map ourselves onto cyberspace, inexorably, and indelibly.

Offering a powerful reinterpretation of technology and contemporary life, this innovative book will be an essential touchstone for the study of cartography and cyberspace in the twenty-first century.

Acknowledgments
Introduction
1. Being Virtually There: The Spatial Problematics of "Cyberspace"
The production of cyberspace
Subjectification and cyberspace
Governmentality as the "contact point"
Confession and parrhesia
Case studies in the production of cyberspace
Mind the gap
Towards a critical politics of the practice of mapping
Conclusion
PART I CARTOGRAPHIC POWER-KNOWLEDGES
2. The History of Internet Mapping
Definition of distributed mapping and scope of chapter
Critical theoretical issues of distributed mapping
The history of distributed mapping as a mode of cartography
Distributed mapping in historical context early developments
Cartography and GIS
The history of the Web and contemporary development of distributed mapping
Implications of distributed mapping
Conclusion
3. Why Mapping is Political
Horizons of possibility
Theory and practice in cartography
"The fisherman’s problem": ontic and ontological knowledges
How we might do philosophical thinking
Problematizing the essential lie
Towards a critical politics of cartography
Summary
PART II TECHNOLOGIES OF THE SELF
4. Authenticity and Authentication
Authenticity as authentication
What space for authenticity?
Technologies of the self
Authenticity of place as a political project: against the "confession" of the map
Self-writing as non-confessional practice of the self
5. Communities in Cyberspace: Confession and Parrhesia
On speaking your mind
Blogging and community
On confession and cyberspace
Confession throughout cyberspace
Resistance: blogging as self-writing
Resistance as parrhesia
PART III CASE STUDIES IN THE PRODUCTION OF CYBERSPACE
6. Disciplinary Cyberspaces: Security and Surveillance
Early applications of crime-mapping
Governmentality
Digital crime-mapping and surveillance
Is privacy the issue?
The risks of security
7. Geographies of the Digital Divide
Some terms and issues
The digital divide at different scales
Divides and lags
Wealth and connectivity
From the global to the regional: Atlanta in context
From the regional to the local: Atlanta in detail
Addressing the divide with GIS
Beyond the digital divide
PART IV CONCLUSION
8. Positivities of Power, Possibilities of Pleasure
Mapping as Befindlichkeit and Verlorenheit
Positivities of power
Possibilities of pleasure
Conclusions
Notes
References
Index