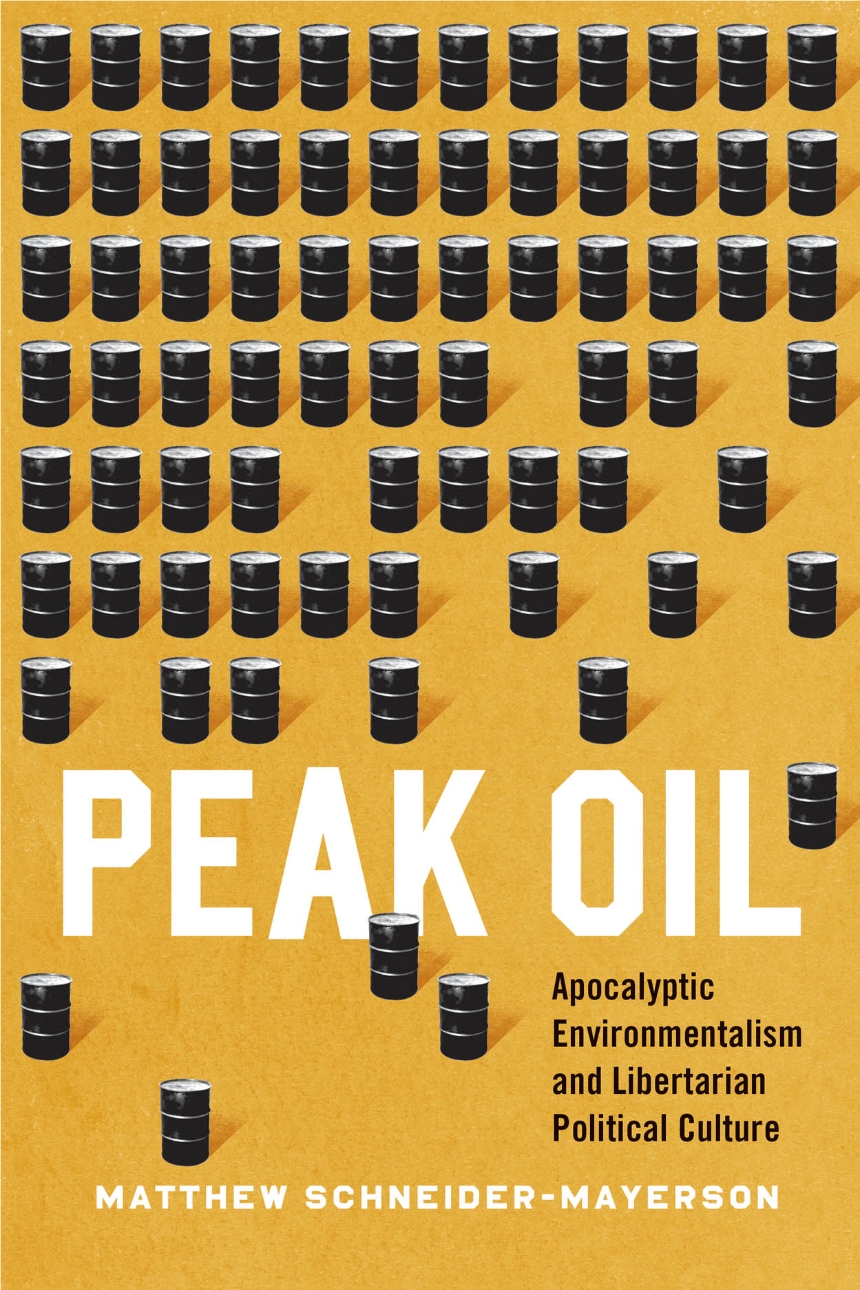 In recent years, the concept of “peak oil”—the moment when global oil production peaks and a train of economic, social, and political catastrophes accompany its subsequent decline—has captured the imagination of a surprisingly large number of Americans, ordinary citizens as well as scholars, and created a quiet, yet intense underground movement.

In Peak Oil, Matthew Schneider-Mayerson takes readers deep inside the world of “peakists,” showing how their hopes and fears about the postcarbon future led them to prepare for the social breakdown they foresee—all of which are fervently discussed and debated via websites, online forums, videos, and novels. By exploring the worldview of peakists, and the unexpected way that the fear of peak oil and climate change transformed many members of this left-leaning group into survivalists, Schneider-Mayerson builds a larger analysis of the rise of libertarianism, the role of oil in modern life, the political impact of digital technologies, the racial and gender dynamics of post-apocalyptic fantasies, and the social organization of environmental denial.

“This is a highly significant, original, and engaging book. Schneider-Mayerson provides a sophisticated analysis of the rise of libertarianism in the United States and articulates well how the struggle to form a collective response reflects a decline of trust in social institutions and the rise of individualism. Peak Oil is well-written, compelling, and very timely. It will no doubt be of interest to readers both inside and outside of the academy.”

“Schneider-Mayerson’s inventive and illuminating study of the peak oil movement is just the kind of scholarly intervention we need now to help us grapple fully with the social and political challenges we face. If his exploration of the practices and beliefs of the ‘Peakists’ is cause for worry, it isn’t because of how they view fossil fuels or its environmental impact. It’s in the largely individual response of peak oil advocates to what is of necessity a collective problem. This mainstreaming of a libertarian ethos in the United States and elsewhere—on both right and left—should ring alarm bells. As much an analysis of contemporary US political culture as it is about the politics of climate change, Peak Oil makes for a stellar addition to debates in which we all have a stake today.”

“From Mad Max to Mad Men, this dead-on critique of long held beliefs about masculinity and traditions of American individualism and techno-optimism—all steadily becoming associated with a ‘shift towards libertarianism’—is by turns entertaining, insightful, and troubling. The book clearly outlines how these traditions and beliefs present daunting challenges to communities interested in organizing and implementing effective and timely responses to accelerating global climate change.”

“Schneider-Mayerson interprets the tendency towards insularity and inactivism as a sign of the peak-oil subculture having accepted more of the dominant mentality of the past few decades than one might expect: in particular, a deep distrust of collective action, and of the state as capable of doing anything without screwing it up, combined with fatalism and an abiding sense of powerlessness. And feeling powerless, one places no demands on those who do have power (the first step toward gaining any). The belief in an inevitable collapse and disintegration of society is stupefying, if not self-fulfilling.”

“Engaging. . . . The strength of Peak Oil resides in its judicious, even-handed approach. Schneider-Mayerson neither idealizes nor vilifies his subjects. He commends them for their insights about petro-capitalist constraints, yet he does not hesitate to call out their limitations. . . . Schneider-Mayerson correctly points out that whatever their biases, peakists were attempting to do something extraordinarily difficult: imagine life aft er petroleum while living in a society fully saturated by it. And today the political fatalism of peakists is unnerving, he concludes, not because it is so rare but because it is so pervasive. The powerful message is that within late petro-capitalism, hope and imagination are in short—but desperately needed—supply.”

“An intriguing and largely sympathetic glimpse into the early twenty first-century cultural phenomenon that was the American peak oil movement. . . . Peak Oil acknowledges, to its great credit, that while peakism has waned, the actual phenomenon of oil depletion hasn’t gone away and deserves our continued attention. . . . With his social science background, Schneider-Mayerson brings a valuable perspective to the issue, and I hope he continues to engage with it in his research.”

“A compelling and nuanced account of the peak oil movement in the era of climate crisis. . . . In this timely, engaging, well-written, and accessible book, Schneider-Mayerson argues that a libertarian shift in culture within the context of environmental crisis explains the individualistic behavior of peakists even as they, in line with their overwhelmingly liberal political ideologies, recognize the need for collective action. Peak Oil pushes readers to recognize the urgent need for political action on climate change while simultaneously providing a thoughtful and sympathetic explanation for why so many people respond to environmental crisis in individualistic ways. . . . Peak Oil is an impressive example of using analysis of a little-known movement to shed light on broader social trends in the United States that inform imaginaries of the future in response to climate change.”

“This book is useful for scholars of oil and popular culture, but it is also an excellent resource for historians of recent American history and politics, as it contextualizes some of the broader cultural issues of the last few decades, including the decline of social capital and the surge in conservative politics.”

“Peak Oil guides us through the media landscape of the present day, with a detailed analysis of the Left’s version of doomsday preppers, “peakists” who prepare individually to survive the anticipated fall of modern civilization. . .Provides a fascinating look into the development of a left subculture that grew in popularity and adherents largely during the Iraq War, beginning in 2004 and tapering off by 2011.”

“A fascinating window into an American subculture often parodied but rarely studied. With preternatural care, Schneider-Mayerson displays an ability to connect the words of his interlocutors with their broader political and social context that makes the book as a whole an enjoyable reading experience recommended for scholars, undergraduate students, and the public at large.”

1 The Peak Oil Ideology and Subculture

2 Abundance, Scarcity, and Limits in the Age of Oil

3 Alone Together: The Libertarian Shift and the Network Effect