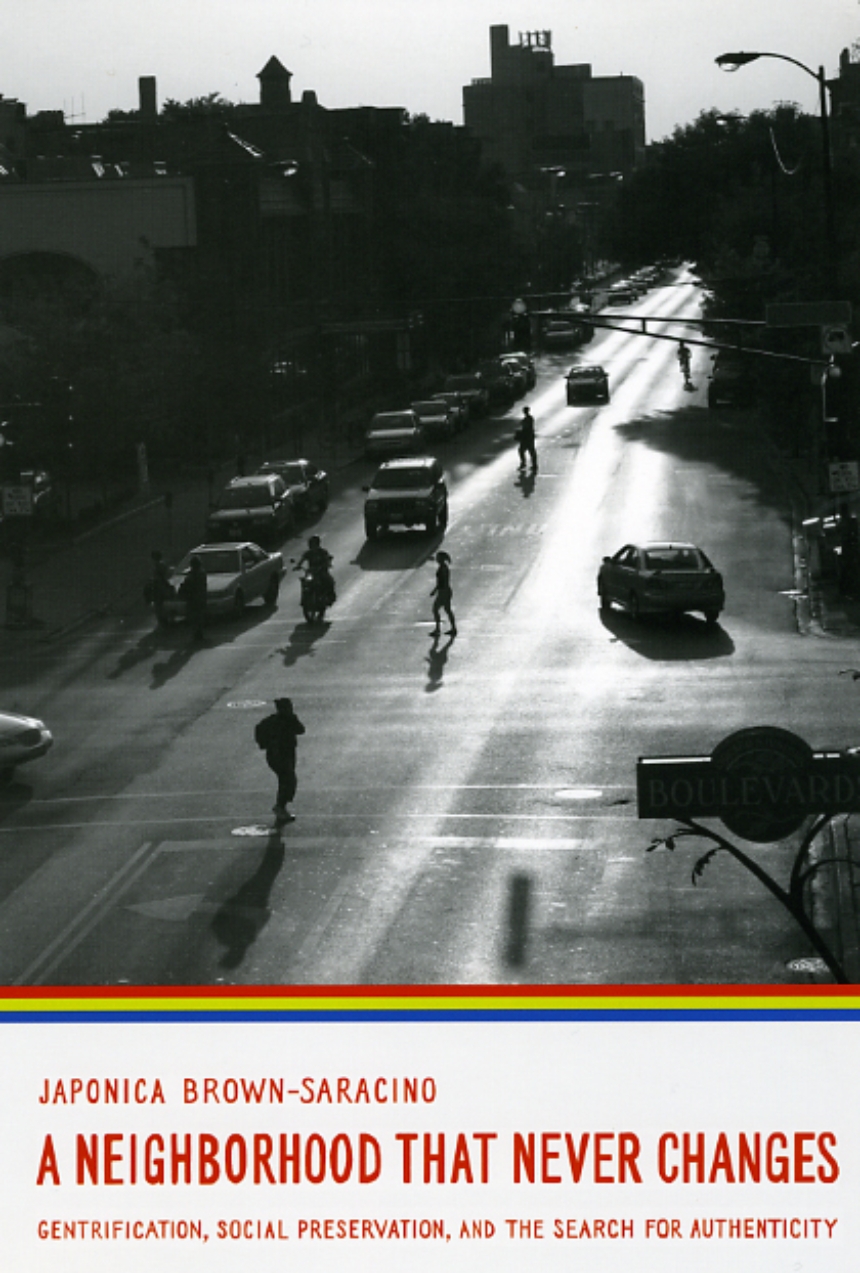 A Neighborhood That Never Changes

Gentrification, Social Preservation, and the Search for Authenticity

A Neighborhood That Never Changes

Gentrification, Social Preservation, and the Search for Authenticity

Newcomers to older neighborhoods are usually perceived as destructive, tearing down everything that made the place special and attractive. But as A Neighborhood That Never Changes demonstrates, many gentrifiers seek to preserve the authentic local flavor of their new homes, rather than ruthlessly remake them. Drawing on ethnographic research in four distinct communities—the Chicago neighborhoods of Andersonville and Argyle and the New England towns of Provincetown and Dresden—Japonica Brown-Saracino paints a colorful portrait of how residents new and old, from wealthy gay homeowners to Portuguese fishermen, think about gentrification.

The new breed of gentrifiers, Brown-Saracino finds, exhibits an acute self-consciousness about their role in the process and works to minimize gentrification’s risks for certain longtime residents. In an era of rapid change, they cherish the unique and fragile, whether a dilapidated house, a two-hundred-year-old landscape, or the presence of people deeply rooted in the place they live. Contesting many long-standing assumptions about gentrification, Brown-Saracino’s absorbing study reveals the unexpected ways beliefs about authenticity, place, and change play out in the social, political, and economic lives of very different neighborhoods.

“Refusing the easy stereotypes that characterize too much reporting on gentrification, Japonica Brown-Saracino provides a nuanced portrait of the varying beliefs and practical activities of affluent, recently arrived residents in quaint rural towns and gritty multiethnic urban neighborhoods. In particular, she illuminates the challenges faced by some community newcomers as they strive to maintain a commitment to social diversity and authenticity in the face of changes that they themselves help to ignite. Exceptionally well researched, analytically sophisticated, and engagingly written, this is an important and original contribution to our understanding of community in America.”

Richard Lloyd, author of Neo-Bohemia: Art and Commerce in the Postindustrial City

“A Neighborhood That Never Changes offers a sophisticated reinvention of the classic community study by emphasizing how local residents interpret contemporary economic and political forces through the lens of culture and the imagination of authenticity. Brown-Saracino’s intellectually ambitious and entertaining book adds to the burgeoning literature on gentrification by slicing through some of the assumptions of the field with empirical rigor. Furthermore, urban and cultural sociology thrive on comparative approaches, and this beautiful book will serve as an exemplar of this perspective for years to come.”

David Grazian, author of On the Make: The Hustle of Urban Nightlife

1  The Research Sites and Methods

4  The Varying Strategies of Social Preservation