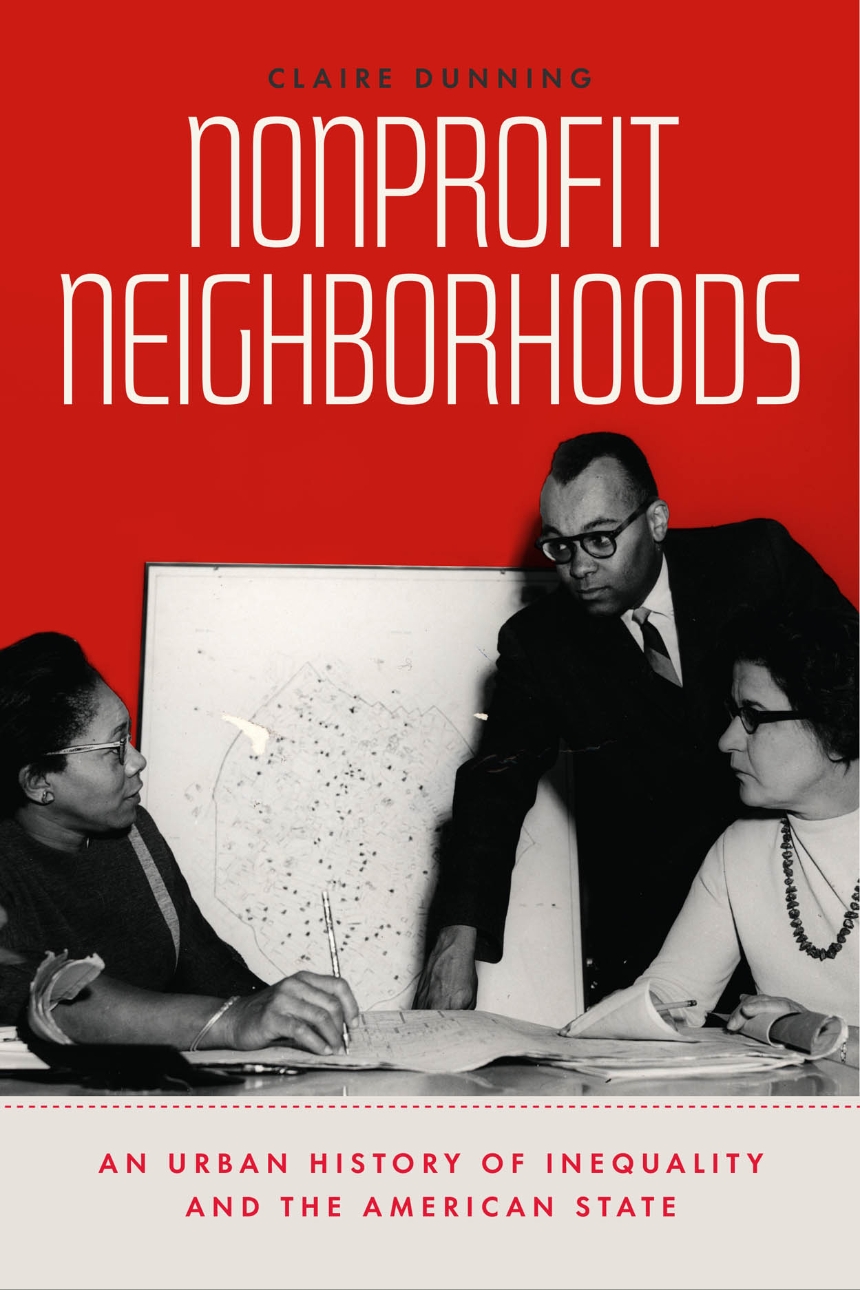 An Urban History of Inequality and the American State

An Urban History of Inequality and the American State

An exploration of how and why American city governments delegated the responsibility for solving urban inequality to the nonprofit sector.

Nonprofits serving a range of municipal and cultural needs are now so ubiquitous in US cities, it can be difficult to envision a time when they were more limited in number, size, and influence. Turning back the clock, however, uncovers both an illuminating story of how the nonprofit sector became such a dominant force in American society, as well as a troubling one of why this growth occurred alongside persistent poverty and widening inequality. Claire Dunning’s book connects these two stories in histories of race, democracy, and capitalism, revealing how the federal government funded and deputized nonprofits to help individuals in need, and in so doing avoided addressing the structural inequities that necessitated such action in the first place.

Nonprofit Neighborhoods begins after World War II, when suburbanization, segregation, and deindustrialization inaugurated an era of urban policymaking that applied private solutions to public problems. Dunning introduces readers to the activists, corporate executives, and politicians who advocated addressing poverty and racial exclusion through local organizations, while also raising provocative questions about the politics and possibilities of social change. The lessons of Nonprofit Neighborhoods exceed the bounds of Boston, where the story unfolds, providing a timely history of the shift from urban crisis to urban renaissance for anyone concerned about American inequality—past, present, or future.

“Illuminating. . . Dunning compels us to consider how promises of grassroots empowerment ended up maintaining the racialized and economic boundaries that imbricate the urban poor. . . . [She] leaves us with the dispiriting conclusion that the enlarged role of nonprofits has failed to mitigate and has even worsened urban inequality."

"Bold, powerful. . . [Dunning's] sober, carefully researched, and elegantly crafted book provides a salutary complication of the Tocquevillian myth that still colors much conventional thinking about the US nonprofit sector: that there is an easy and clearly intelligible congruence between democratic vitality in the United States and the nation’s rich associational life. It is difficult to read Nonprofit Neighborhoods without one’s faith in that congruence being permanently shaken."

"Nonprofit Neighborhoods adds great value to the long-ongoing discussion and healthy debate about the best way to think of the relationship between civil society and the state. . . Dunning’s book generally and convincingly concludes that publicly funding locally based nonprofit groups to implement policy has, in the end, failed to achieve a more-inclusive government, to reduce urban poverty and inequality, and to dismantle racism."

“Nonprofit Neighborhoods takes us to the frontlines of the government and philanthropic grantsmanship, municipal power brokering, and street-level protest that brought an evolving, multi-layered infrastructure of “public-private partnership” to Boston’s working-class communities of color starting in the 1960s—promising to resolve problems of poverty with improved social services in the face of widening structural divides. Persuasively argued and analytically nuanced, it tracks the continuities as well as the gradually unfolding transformations in urban policy, politics, and governance that link the social democratic aspirations of Great Society liberalism to the social austerity of our neoliberal age. Dunning provides important insights to all engaged in struggles against inequality—as scholars, policy advocates, practitioners, and activists.”

“Nonprofit Neighborhoods is a revelation. Through a rich archival study of urban renewal in Boston, Dunning elegantly reconstructs how public projects came to be organized around grants and funding competitions. Decentralization and community participation were enhanced, but key decisions remained in the hands of city officials, foundation officers, and increasingly private lenders. The result is an eye-opening analysis of how policy reform transformed democratic governance.”

“Nonprofit Neighborhoods is a timely and original account of how the federal government has delegated urban policymaking, social service provision, and anti-poverty efforts to the private sector. This eye-opening book explains the proliferation of urban nonprofits —a distinctive feature of the American welfare state—and offers a sobering critique of the limitations of neighborhood-based solutions to persistent urban inequality.”

“Nonprofit Neighborhoods makes a paradigm-shifting contribution to the urban and policy history of the second half of the twentieth century. In her important interrogation into the nature of public-private partnerships, Dunning provides important insight into the changing nature of state power and the persistence of structural inequality. Lucidly written and deeply researched, this is an excellent book, poised to recast several scholarly fields.”

“Among the many intesting questions about the history of America’s cities, there are a few democracy-consequential questions whose answers literally define the future. In Nonprofit Neighborhoods, Dunning asks and answers morally uneasy and politically impolite questions such as: Why has the concentration of nonprofits in Black communities perpetuated not alleviated inequality? and How have these nonprofit neighborhoods become ‘spaces of inclusion and exclusion’? With precision, clarity, and subtly, Dunning tells a story of government and private power exerted upon and even undermining nonprofit neighborhoods. This sweeping history is a compelling cartography of power, cities, and race as well as a hopeful map for what America might be—if we but learned from the past.”