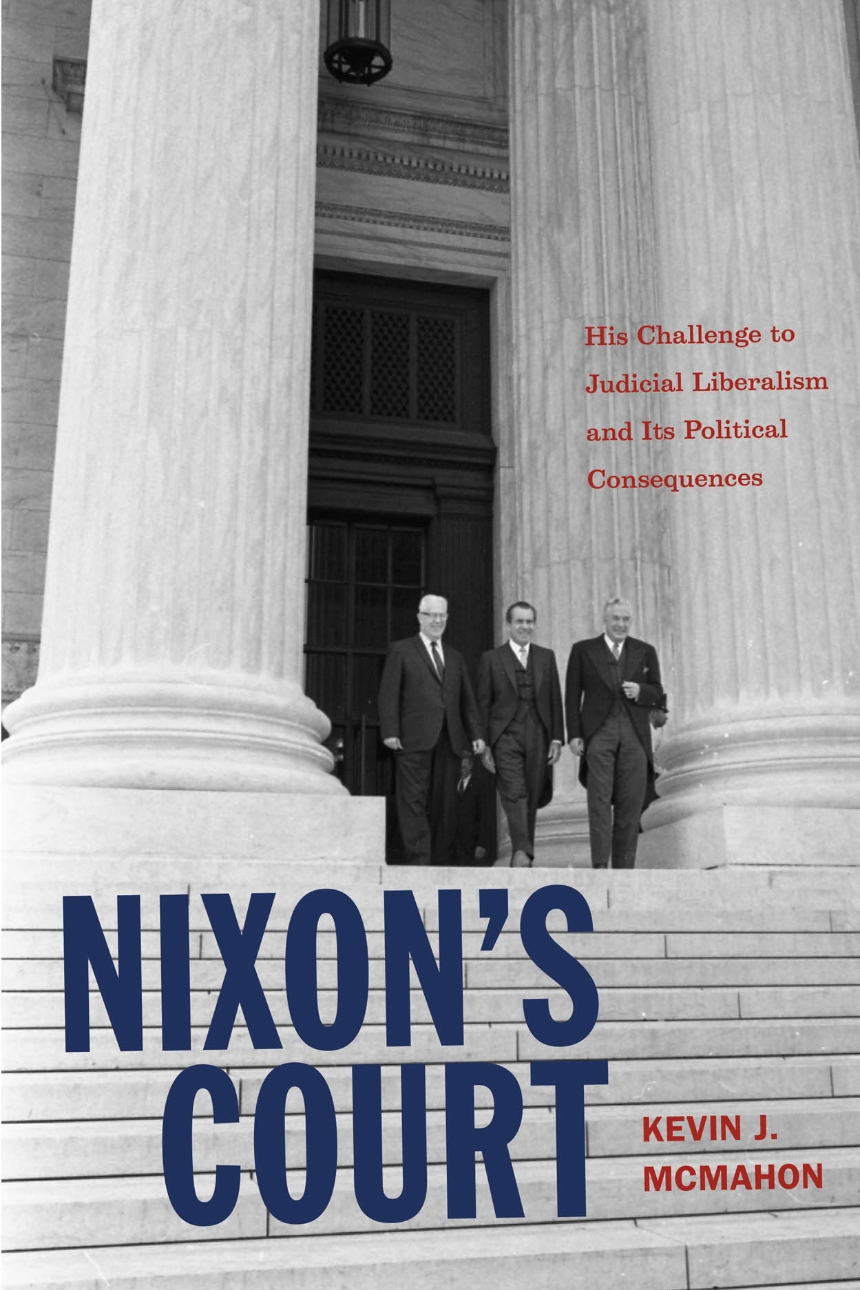 His Challenge to Judicial Liberalism and Its Political Consequences

His Challenge to Judicial Liberalism and Its Political Consequences

Most analysts have deemed Richard Nixon’s challenge to the judicial liberalism of the Warren Supreme Court a failure—“a counterrevolution that wasn’t.” Nixon’s Court offers an alternative assessment. Kevin J. McMahon reveals a Nixon whose public rhetoric was more conservative than his administration’s actions and whose policy towards the Court was more subtle than previously recognized. Viewing Nixon’s judicial strategy as part political and part legal, McMahon argues that Nixon succeeded substantially on both counts.

Many of the issues dear to social conservatives, such as abortion and school prayer, were not nearly as important to Nixon. Consequently, his nominations for the Supreme Court were chosen primarily to advance his “law and order” and school desegregation agendas—agendas the Court eventually endorsed. But there were also political motivations to Nixon’s approach: he wanted his judicial policy to be conservative enough to attract white southerners and northern white ethnics disgruntled with the Democratic party but not so conservative as to drive away moderates in his own party. In essence, then, he used his criticisms of the Court to speak to members of his “Silent Majority” in hopes of disrupting the long-dominant New Deal Democratic coalition.

For McMahon, Nixon’s judicial strategy succeeded not only in shaping the course of constitutional law in the areas he most desired but also in laying the foundation of an electoral alliance that would dominate presidential politics for a generation.

“Nixon’s Court provides the most definitive account yet written of the reasoning behind President Nixon’s choices for Supreme Court justicies and the legal and electorial consequences of those choices. . . . McMahon skillfully uses a combination of archival material (including the Nixon tapes), press accounts, personal interviews, and statistical data to make a persuasive case, breaking new ground in the understanding of Nixon’s leadership and its long-term impact on judicial and partisan politics. Entwining insightful historical and legal analyses with a lively narrative, McMahon’s book is highly readable for undergraduate students and general readers as well as academics. Nixon’s Court is an outstanding contribution to presidential studies and Supreme Court history that revises the understanding of the Nixon presidency and the Republican resurgence that followed. Highly recommended.”

“Nixon’s Court  provides a compelling case study at the intersection of constitutional law, judicial politics and presidential studies. . . . [McMahon] shows how the larger context of American politics shaped the judicial policies of a president who cared less about waging a jurisprudential counter-revolution and more about doing whatever was necessary to remain in power.”

“The standard view of Richard M. Nixon’s staffing of the Burger court is that of ‘a counterrevolution that wasn’t.’ Nixon’s Court by Kevin J. McMahon effectively dispels this idea and replaces it with a well-researched, tightly written critique that demonstrates that Nixon cared about two issues—busing and crime—and that he was effective in moving the Court to adopt positions close to his own. . . . [A] valuable addition to regime literature. It vividly illuminates both the Nixon presidency and the Burger court.”

“McMahon’s book is valuable for insights into Nixon’s mindset in selecting his Supreme Court candidates."

“[A] balanced, provocative, and engaging book. McMahon’s valuable effort to correct the record on the Nixon presidency should not go unnoticed.”

“[A] careful study of how a president could (and in the case of Nixon, did) use judicial policy-making, from appointments of Justices to the nuts-and-bolts of executive enforcement of the laws, to foster political objectives. . . . McMahon has an important story to tell, and he tells it well.”

“McMahon’s excellent account of how Richard Nixon’s judicial strategy was driven by his electoral strategy provides ample evidence that constitutional law is indeed shaped by broader political forces. It also challenges some of the conventional wisdom about the impact of Nixon’s appointments and his motives for making them. . . . It is carefully and thoroughly researched and clearly argued, and offers new insights into an important era that continues to have an impact on our judicial and electoral politics. . . . [A] very fine piece of scholarship.”

“Kevin McMahon makes excellent use of the extensive archival record and the infamous oval office tapes to provide a persuasive case that Nixon chose his nominees largely on the basis of electoral calculations. . . . Nicely researched [and] well-documented.”

“Kevin McMahon’s skills at archival research, statistical analysis, and constitutional law analysis combine here into a superlative account of Nixon’s judicial strategy, its impact on the Court, and the corresponding implications of Court decisions on his political fortunes. McMahon’s work will force a reconsideration of Nixon’s political strategy and will broaden the focus beyond the simplistic ‘Southern Strategy’ explanations to a consideration of all components of Nixon’s New American Majority. All students of the presidency will benefit from a close reading of this work.”

“This book is fascinating, original, and important. It adds a rich case study to the regime politics literature that claims politicians use courts to advance their electoral and policy aims. McMahon deploys multiple sources of evidence to reveal how Nixon shifted the Supreme Court to the right on school desegregation and law and order as a successful electoral strategy, bringing white southerners and ethnic Catholics into the Republican fold and profoundly reshaping American politics.”

“In this utterly engaging book, Kevin McMahon argues that Richard Nixon’s judicial strategy, and Nixon himself, have been misunderstood. Nixon’s actual ideology was more moderate than his public rhetoric implied; his concerns about the judiciary extended beyond the legal and into the electoral; and his record, properly understood, proved more auspicious than others have credited him. This important book will force scholars to rethink not only Nixon’s presidency, but also the very criteria upon which they categorize all presidents’ successes and failures.”

“Nixon’s Court will attract a lot of attention and set the record straight in some important areas. The Nixon Court may have been ‘a counterrevolution that wasn’t,’ but McMahon demonstrates that this should not be considered a failure on Nixon’s part, but consistent with his stated objectives.”

“Emphasizing Richard Nixon’s use of the power to nominate Supreme Court justices and his articulation of constitutional views as an electoral strategy rather than an ideological one, Nixon’s Court provides a powerful account of why the Burger Court was less conservative than many hoped (and feared) it would be. Kevin McMahon’s important argument connecting presidential electoral concerns to developments in constitutional law makes clear some previously obscured facets of the Supreme Court’s work in the late twentieth century.”

“Kevin McMahon, who revealed how New Dealers shaped a Supreme Court open to the civil rights movement, now shows how Richard Nixon used the Court to divide Democrats and open the way for a new conservative coalition. But today’s conservatives still seek to push the Court further to the right—so the battle Nixon began continues in the age of Obama and may determine its fate.”

List of Illustrations
Acknowledgments
Chapter 1 Nixon’s Victory: Oppositional Presidents and the Cycles of Supreme Court Politics
Part I Circa 1968: Law, Order, and the Race for the White House
Chapter 2 The Fight for the Nomination: Holding On for a Second Chance
Chapter 3 Running to Be “the One”: Nixon, Divided Democrats, and a Chastened Court
Part II The Politics of Desegregation
Chapter 4 “Instead of Listening to What We Say . . . Watch What We Do”: Electoral Strategies, Practical Politics, and Nixon’s Judicial Policy
Chapter 5 Leading by Following: Nixon, the Court, and the Road to School Desegregation
Part III The Dynamics and Difficulties of Remaking the Court
Chapter 6 The Party of Lincoln’s Last Stand? The GOP Divide and the Rejection of Nixon’s Southern Strict Constructionists (or, How Senate Republicans Made the Court More Liberal)
Chapter 7 Fifty-Three Seconds That Shaped the Court: Nixon’s Acceptable Southerner and Accidental Ideologue (or, How Liberals Made the Court More Conservative)
Part IV The Political and Electoral Consequences of Supreme Court Decisions
Chapter 8 Fighting Busing, Crime, Smut, and Social Disorder in America: Strong Rhetoric, Selective Action
Chapter 9 Judicial Decisions and the Ballot Box: Nixon’s Court and the Division of the Democratic Coalition
Chapter 10 Evaluating the Conservative Counterrevolution through the Nixon/Rehnquist Nexus
Appendix
Notes
Works Cited
Back to top