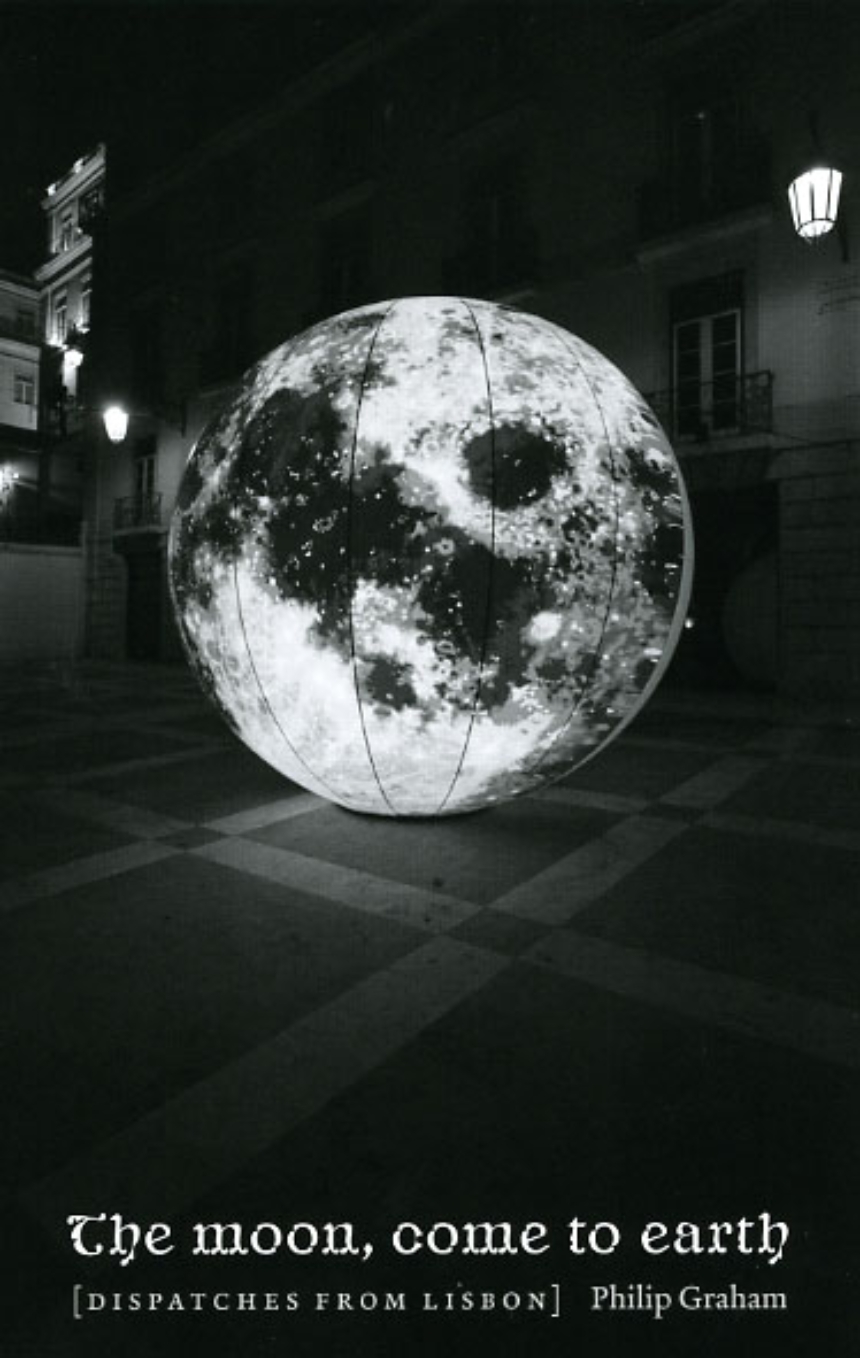 A dispatch from a foreign land, when crafted by an attentive and skilled writer, can be magical, transmitting pleasure, drama, and seductive strangeness.

In The Moon, Come to Earth, Philip Graham offers an expanded edition of a popular series of dispatches originally published on McSweeney’s, an exuberant yet introspective account of a year’s sojourn in Lisbon with his wife and daughter. Casting his attentive gaze on scenes as broad as a citywide arts festival and as small as a single paving stone in a cobbled walk, Graham renders Lisbon from a perspective that varies between wide-eyed and knowing; though he’s unquestionably not a tourist, at the same time he knows he will never be a local. So his lyrical accounts reveal his struggles with (and love of) the Portuguese language, an awkward meeting with Nobel laureate José Saramago, being trapped in a budding soccer riot, and his daughter’s challenging transition to adolescence while attending a Portuguese school—but he also waxes loving about Portugal’s saudade-drenched music, its inventive cuisine, and its vibrant literary culture. And through his humorous, self-deprecating, and wistful explorations, we come to know Graham himself, and his wife and daughter, so that when an unexpected crisis hits his family, we can’t help but ache alongside them.

A thoughtful, finely wrought celebration of the moment-to-moment excitement of diving deep into another culture and confronting one’s secret selves, The Moon, Come to Earth is literary travel writing of a rare intimacy and immediacy.

"The Moon, Come to Earth: Dispatches from Lisbon is so enchanting: It dances and sighs. It twitches and hums and stumbles and then rights itself, with a winsome smile. It’s like a living thing, filled with desire and uncertainty and joy and regret . . . Graham is a nimble, witty writer with a penchant for teasing out the small, telling detail from the crowded scene around him. . . and this book is the perfect companion as one contemplates those mysteries, those ceaseless journeys outward and inward."

"Graham’s writing is unobtrusive and gentle, and . . . there is a pleasant luminosity that renders this little books of essays serene and enjoyable."

"In The Moon, Come to Earth Philip Graham takes us on the best kind of journey, as he simultaneously reveals the fascinating city of Lisbon--its neighborhoods, its writers, its customs, its cuisine--and offers an intimate portrait of his beloved family. With his far-reaching intellect Graham is the ideal travelling companion, and The Moon, Come to Earth is a beautiful and surprising book."

"I have long been a great fan of the delicately nuanced, keenly perceptive, beautifully articulated sensibility of Philip Graham. In his dispatches from Lisbon, The Moon, Come to Earth, he is at his exquisite best. I am very happy to follow this wonderful mind wherever in the world it wishes to go."

"A good part of the reason I feel so passionately positive about The Moon, Come to Earth is how well Graham is able to convey his compassionate, generous, and comic spirit to the reader. Unfailingly endearing, whether he’s trying to figure the number of cobblestones in Lisbon or trying to find an ATM to buy tickets for a futbol match, Graham becomes the reader’s traveling surrogate in the best sense. But this book is as much about parenthood as it is about Portugal, with Graham’s daughter Hannah as the most constant figure in the narrative. The portrait of this father-daughter relationship is about as lovely as I’ve seen."

"A beautiful Valentine to Lisbon. Philip Graham and his family take their artistic keenness to Portugal and capture its mystery and contradictions: Whether it’s visiting the set of a reality TV show where famous writers play hosts, or overlooking a gorgeous stone labyrinth used to trap wolves, Graham adores the offbeat even as he captures the soul of the city with good humor. There’s a taste of wine here, and giant sardines, and carnivals, and saudade, and a moon made of canvas with a light like a glowing heart. This is about a family living everyone’s dream of trying out a year abroad. But it might be the saga of the daughter, Hannah, and how the adventure abruptly becomes a journey into the loss of childhood, that grips the reader most deeply."

Katherine Vaz, author of Saudade, Mariana, Fado & Other Stories , and Our Lady of the Artichokes and Other Portuguese-American Stories

"Part travelogue and part memoir, Philip Graham’s The Moon, Come to Earth brings us the news of Portugal past and present, touching on food and sports, religion and language, music and literature and art. Graham’s greatest strength is his ability to observe sharply and think clearly through the varied roles of public spectacle: the many ways in which the Portuguese tell stories of and to themselves through fireworks festivals and bullfights, medieval fairs and theater, magic shows and soccer matches and transformational public art. Given structure by his repeated return to the concept of saudade--’a complicated feeling that combines sorrow, longing and regret, laced perhaps with a little mournful pleasure’--and given buoyancy by the ebullience of his voice, The Moon, Come to Earth shows Graham at the top of his game."

"The Moon, Come to Earth offers manifold delights. For an uninitiated reader, it’s an introduction to Portuguese culture, language, literature, and history. At the same time, Graham speaks eloquently to the wider processes of discovering emotional truths through self-reflection and of revealing philosophical and political insights through a close attention to particulars. Graham’s voice--with its stunning metaphors, elegant turns of phrase, and delightful wit--carries such warmth and charm that one keeps reading partly for the pleasure of his company."

Kirin Narayan, author of  My Family and Other Saints

I Don’t Know Why I Love Lisbon

So Who Says Objects Are Inanimate?

Alchemy: From a Rube to a Local

Isn’t There a Law against Filching Calçadas?

We Capture the Castle

On This Side of the Ocean