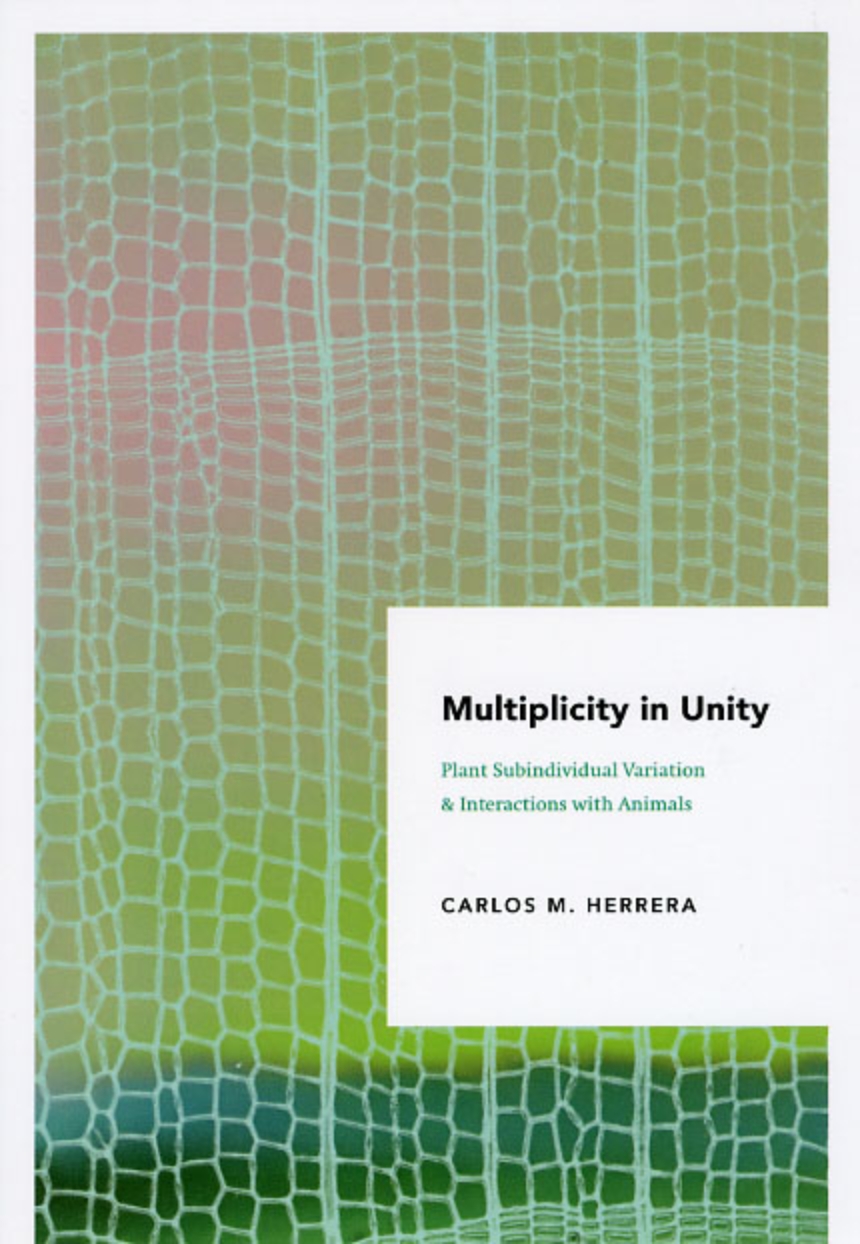 Plants produce a considerable number of structures of one kind, like leaves, flowers, fruits, and seeds, and this reiteration is a quintessential feature of the body plan of higher plants. But since not all structures of the same kind produced by a plant are identical—for instance, different branches on a plant may be male or female, leaf sizes in the sun differ from those in the shade, and fruit sizes can vary depending on patterns of physiological allocation among branches—a single plant genotype generally produces a multiplicity of phenotypic versions of the same organ.

Multiplicity in Unity uses this subindividual variation to deepen our understanding of the ecological and evolutionary factors involved in plant-animal interactions. On one hand, phenotypic variation at the subindividual scale has diverse ecological implications for animals that eat plants. On the other hand, by choosing which plants to consume, these animals may constrain or modify plant ontogenetic patterns, developmental stability, and the extent to which feasible phenotypic variants are expressed by individuals.

An innovative study of the ecology, morphology, and evolution of modular organisms, Multiplicity in Unity addresses a topic central to our understanding of the diversity of life and the ways in which organisms have coevolved to cope with variable environments.

“A thoroughly researched and thought-provoking volume. . . . This is a valuable work for advanced audiences in a wide range of disciplines in ecology, evolution, and physiological genetics.”

“Multiplicity in Unity is the only substantial book in existence whose primary focus is the within-individual trait variability of plant organs. . . . [Herrera’s book] should be required reading for anyone involved in studying plant functional traits, and particularly those who develop and use plant-trait databases. At a broader level, this book would be a most useful bookshelf addition for anyone interested in the study of variability in plant ecology.”

Chapter 2. Which Traits Vary within Plants?

Many different features vary across reiterated structures of the same plant.

The extent of subindividual variation in continuously varying leaf, flower, fruit, and seed traits is assessed.

Chapter 4. Distribution of Subindividual Variability in Time and Space

How are variants of reiterated structures organized along temporal, spatial, and architectural axes?

Mutations within individuals and organ-level responses to environmental cues are the main classes of remote causes of within-plant variability in reiterated structures.

Ontogenetic contingency, the interplay between inherent architecture and environmental milieu, and developmental stochasticity are mechanisms responsible for within-plant variability of reiterated structures.

Phytophagous animals’ discrimination among organs of the same plant can lead to the most profitable choice but  has attendant costs that may influence their overall performance and promote among-plant selectivity.

Subindividual variation in the characteristics of reiterated organs may influence the fecundity or vegetative performance of plants, and through this mechanism, individual fitness differences may arise as a consequence of variation in the extent and organization of variability.

Subindividual multiplicity of organs can affect the evolutionary trajectory of organ traits by setting upper limits on responses to selection, opening the possibility of selection by animals on plant-level variability, and conditioning the size of realized phenotypic space at the individual and population levels.