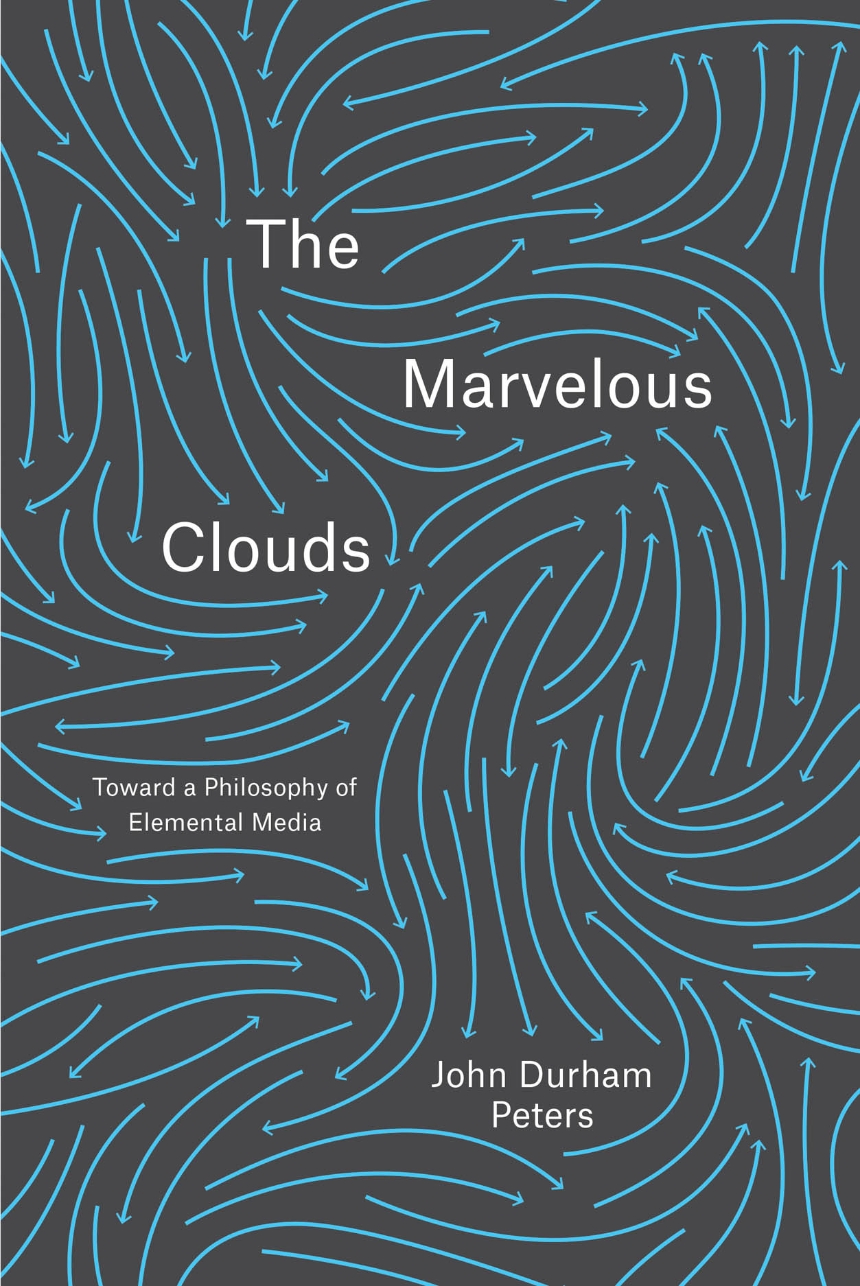 Toward a Philosophy of Elemental Media

Toward a Philosophy of Elemental Media

When we speak of clouds these days, it is as likely that we mean data clouds or network clouds as cumulus or stratus. In their sharing of the term, both kinds of clouds reveal an essential truth: that the natural world and the technological world are not so distinct. In The Marvelous Clouds, John Durham Peters argues that though we often think of media as environments, the reverse is just as true—environments are media.

Peters defines media expansively as elements that compose the human world. Drawing from ideas implicit in media philosophy, Peters argues that media are more than carriers of messages: they are the very infrastructures combining nature and culture that allow human life to thrive.  Through an encyclopedic array of examples from the oceans to the skies, The Marvelous Clouds reveals the long prehistory of so-called new media. Digital media, Peters argues, are an extension of early practices tied to the establishment of civilization such as mastering fire, building calendars, reading the stars, creating language, and establishing religions. New media do not take us into uncharted waters, but rather confront us with the deepest and oldest questions of society and ecology: how to manage the relations people have with themselves, others, and the natural world.

A wide-ranging meditation on the many means we have employed to cope with the struggles of existence—from navigation to farming, meteorology to Google—The Marvelous Clouds shows how media lie at the very heart of our interactions with the world around us.  Peters’s  book will not only change how we think about media but provide a new appreciation for the day-to-day foundations of life on earth that we so often take for granted.

“Wide-ranging, playful, erudite, and delightfully diverse, The Marvelous Clouds redefines media in the largest possible terms, as anything that communicates meaning, including bodies, the environment, and the world itself.  Although this may seem to rob media of its specificity and therefore of its theoretical purchase, in Peters’s hands it becomes the occasion for making surprising and insightful connections.  A treat for academics and general readers alike, this is a book not to be missed.”

N. Katherine Hayles, author of How We Think: Digital Media and Contemporary Technogenesis

“Peters’s dazzlingly intelligent and elegantly written book has the potential of marking a long-anticipated threshold in the world of media studies. Conversant with the philosophical traditions and with the ongoing debates in Germany, where this emerging discipline took its origin, his epistemological realism overcomes the conventional positions of the ‘linguistic turn’ and of ‘constructivism’ with a fresh and truly inspired unfolding of intuitions ranging from Martin Heidegger's ‘fourfold’ to the Emersonian philosophy of nature. Between earth and sky, Peters understands and analyzes media as the energy behind our environment’s permanent transformations. The Marvelous Clouds, I believe, is the foundational media epistemology that we have been awaiting for decades.”

“The book is, on one level, an ambitious re-writing — a re-synthesis, even — of concepts of media and culture. On another, it is a rich and entertaining compendium of arcana, covering everything from shipwrighting to planetary motion, from bone evolution to calendrical design. Ultimately, it is nothing less than an attempt at a history of Being, from an unusually brisk, cheerful and pragmatic Heideggerian.”

“A highly original book. . . . This is a deeply philosophical and beautifully written account of the modes of being of all things, and their interrelationships.”

“More than fundamental. Media in this book are not defined as just more technological supplements to human beings but as a source that opens an extension for human self-knowledge. . . . Peters defines modern technologies as a space endowed with intelligence that seeks to be like God.”

“With great accessibility, Peters presents an overview of media philosophy since the mid-20th century. Figures notorious for their opaque philosophical ruminations, such as Martin Heidegger and Marshall McLuhan, are introduced with an inviting blend of humor and clarity. Throughout his thorough discussions of contemporary German media theory, Peters blends in unexpected liter­ary allusions and offers comparisons to American think­ers such as Thoreau or Emerson. Peters’ ability to turn a good phrase is welcome.”

“Working from the belief that there is meaning in nature, Peters posits that media are environmental. He philosophizes beyond the divides and creates a conversation between the material and the immaterial to navigate the digital landscape. In seven chapters, Peters sketches the landscape of media theory by examining media via the metaphors of sea, fire, sky, Earth, and the ethereal. In a particularly interesting chapter, ‘God and Google,’ Peters explores the ‘right to be forgotten’—the right to have old and unflattering data wiped from the Web. In the conclusion, he argues that the public sphere has always needed nature as its condition, but now the public sphere needs content as well. Other fine books have engaged the topic of digital media . . . but until now, none offered a philosophical exploration of media's place at the very heart of human interactions with the world. Recommended.”