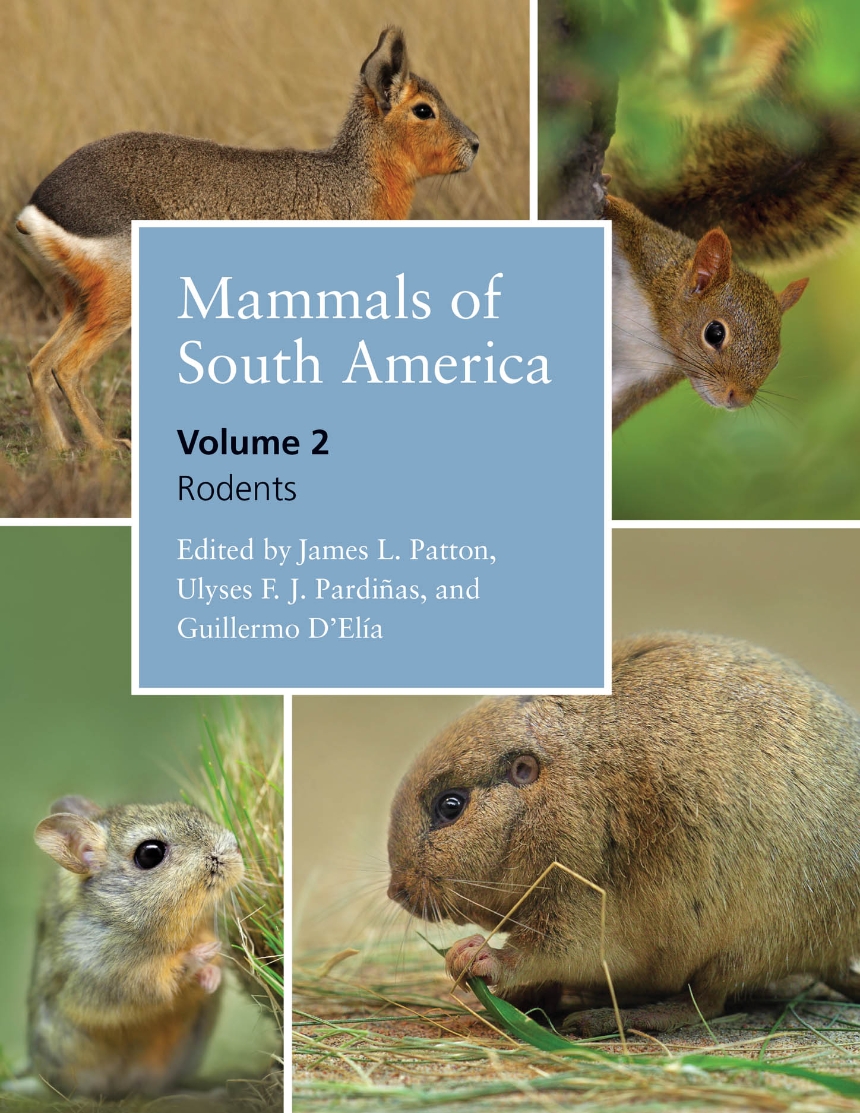 The second installment in a planned three-volume series, this book provides the first substantive review of South American rodents published in over fifty years. Increases in the reach of field research and the variety of field survey methods, the introduction of bioinformatics, and the explosion of molecular-based genetic methodologies have all contributed to the revision of many phylogenetic relationships and to a doubling of the recognized diversity of South American rodents. The largest and most diverse mammalian order on Earth—and an increasingly threatened one—Rodentia is also of great ecological importance, and Rodents is both a timely and exhaustive reference on these ubiquitous creatures.

From spiny mice and guinea pigs to the oversized capybara, this book covers all native rodents of South America, the continental islands of Trinidad and Tobago, and the Caribbean Netherlands off the Venezuelan coast. It includes identification keys and descriptions of all genera and species; comments on distribution; maps of localities; discussions of subspecies; and summaries of natural, taxonomic, and nomenclatural history. Rodents also contains a detailed list of cited literature and a separate gazetteer based on confirmed identifications from museum vouchers and the published literature.

“A must have for anyone with a serious interest in the mammals of South America!”

“Mammals of South America was initiated in 1987. Nearly three decades later, it is not hyperbolic to state that for the foreseeable future Mammals of South America, Volume 2: Rodents establishes the baseline for our understanding of this most remarkable mammalian radiation. The authors are all to be congratulated on a herculean task. Specialists in specific taxa may quibble over some treatments, but every scientist interested in the mammals of South America will want this on their shelf. And whether this reflects generosity of the publisher or the editors is not clear, but at $95 this is the best ‘bang for the buck' to appear on the market in many years. Patton and company have distilled a remarkable amount of information in an immediate classic; now it is ‘our turn’ to build on this effort and the legacy this represents.”

Douglas A. Kelt, University of California, Davis | Journal of Mammalogy

“The Order Rodentia is the most speciose among mammals. With close to 2,300 species, the order represents about 42% of extant mammalian species. A very diverse array of rodent radiations is evident in South American forms. Because of this, attempting a complete compendium of Neotropical rodents presents an extremely daunting task, especially considering the explosive number of new genera and species recognized during the past fifty years. Nonetheless, the editors of this volume, and the 53 contributing authors, most of whom have many years of field experience in Neotropical mammalogy, have succeeded in turning this task into a monumental achievement. . . . The book is indispensible for anyone working on or interested in South American rodents. It is a model of scholarship—representing years of effort—and will be the foundational reference on South American mammals for decades to come. The editors and authors associated with Volume 3 in this series certainly have a very tough act to follow.”

“An amazing accomplishment. Rodents are by far the most diverse mammalian order on a global scale, and South America could justifiably be called the rodent continent. Charles Darwin himself remarked on the diversity of the South American rodent fauna, which is now known to include separate radiations of several major clades that arrived on the continent at different times. Those radiations are of exceptional interest to evolutionary biologists as examples of explosive diversification and niche-filling by lineages entering new adaptive zones. Because the South American mammal fauna as a whole is (literally) a textbook example of macroevolution, South American rodents are front-and-center as objects of active research interest. The editors have done a truly remarkable job of compiling these accounts, many of which provide the first-ever continent-wide treatments of notoriously difficult groups. No other collection of authors could possibly produce a comparable work, nor is it likely that any other editors could have successfully elicited such results over the many years this volume has been in gestation. It will have a large and enduring influence on Neotropical vertebrate zoology.”

“A state-of-the-art compendium. This is not merely an updating of information that may have appeared in a previously published volume or assortment of separate volumes, but contains much new, never-before-published material and suggestions for future research. It and its predecessor not only constitute monumental contributions to the mammalogy of South America, but to mammalogy as a whole. The Mammals of South America series will be among the top few most important contributions to mammalogy of all time.”