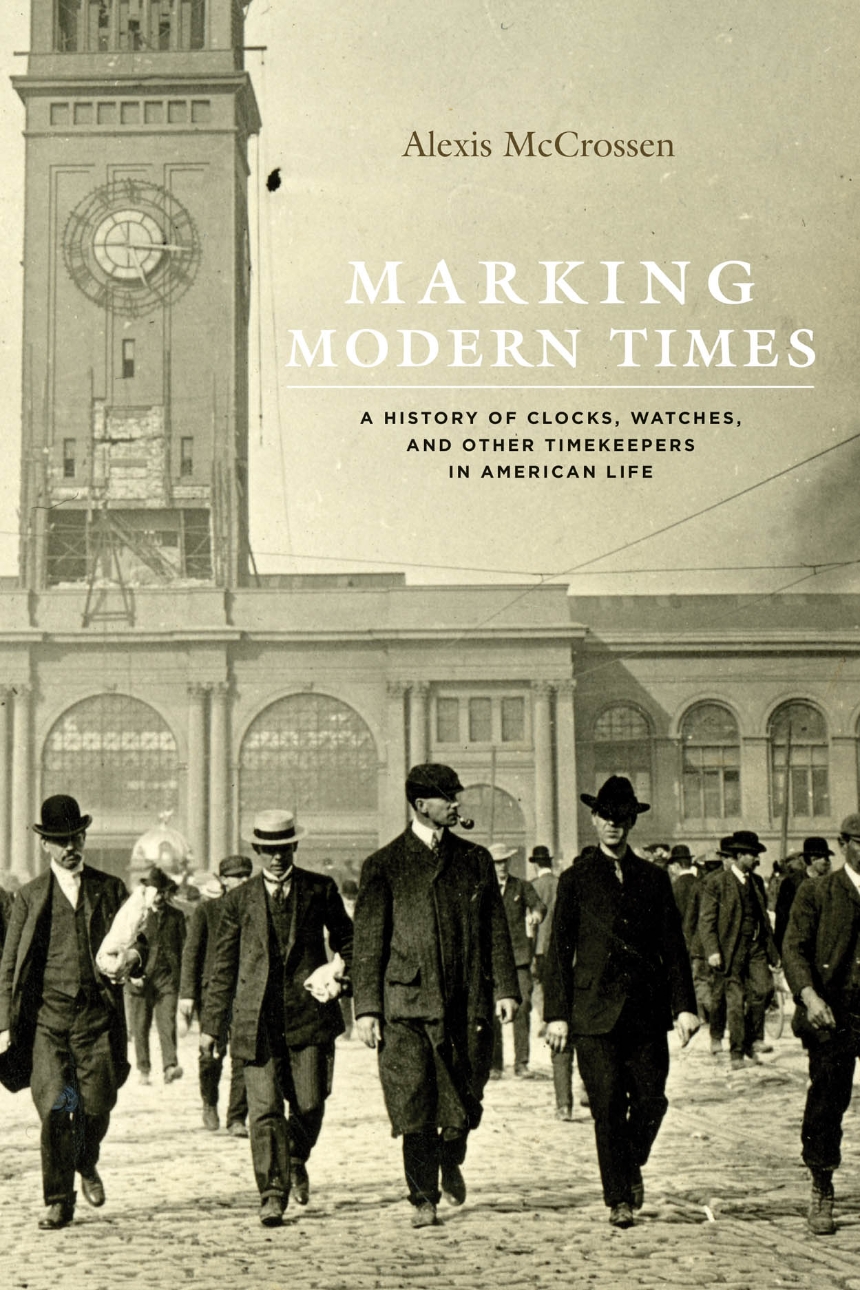 A History of Clocks, Watches, and Other Timekeepers in American Life

A History of Clocks, Watches, and Other Timekeepers in American Life

The public spaces and buildings of the United States are home to many thousands of timepieces—bells, time balls, and clock faces—that tower over urban streets, peek out from lobbies, and gleam in store windows. And in the streets and squares beneath them, men, women, and children wear wristwatches of all kinds. Americans have decorated their homes with clocks and included them in their poetry, sermons, stories, and songs. And as political instruments, social tools, and cultural symbols, these personal and public timekeepers have enjoyed a broad currency in art, life, and culture.
In Marking Modern Times, Alexis McCrossen relates how the American preoccupation with time led people from across social classes to acquire watches and clocks. While noting the difficulties in regulating and synchronizing so many timepieces, McCrossen expands our understanding of the development of modern time discipline, delving into the ways we have standardized time and describing how timekeepers have served as political, social, and cultural tools in a society that doesn’t merely value time but regards access to time as a natural-born right, a privilege of being an American.

"How were timepieces in public places employed as symbols of authority by both public and private entities in nineteenth-century America? How did pocket watches and other private timekeeping devices move from a symbol of prestige for the wealthy to a ubiquitous personal possession? How did the interface between public clocks and personal timepieces change the structure and schedule of life throughout the country? These questions and others are masterfully addressed in this painstakingly researched account of the culture of timekeeping in America. By tracing the different types of public clocks--from tower clocks to time balls--as well as the emergence of inexpensive pocket watches, McCrossen tells a story of a period when the quest for accurate timekeeping became an obsession in the US."

“A precise, acute, and well-measured monograph. It lucidly tracks change over time, spanning about four full generations, and gets better and better as it runs along. . . . What a timely book!”

Michael O'Malley, author of Face Value: The Entwined Histories of Money and Race in America

“Marking Modern Times beautifully captures a complicated history behind the remarkable timepieces that once adorned our streets and public buildings. Like a good cultural historian, Alexis McCrossen picks up a story we have missed—’a public clock era’ punctuated by war and peace, poverty and prosperity, by the wishes of local jewelers, railroad magnates, reforming politicians and the federal government. And the illustrations are a delight!”

“Alexis McCrossen’s Marking Modern Times is a rich and fascinating book full of wonderful detail about the visibility of time and the material history of timekeeping in America. This is a deeply researched study that speaks to readers across a variety of fields, from urban history and cultural history to the histories of technology and time.”

David Henkin, author of The Postal Age: The Emergence of Modern Communications in Nineteenth-Century America

“Important and engaging. . .The book’s great success [is] in adding depth and detail to a story that we thought we knew and, in so doing, making it fresh and striking all over again.”

“McCrossen successfully avoids one-dimensional explanations, instead examining a wide variety of people, places, technologies and social practices which together influenced the adoption of clock time. . . . Marking Modern Times is an innovative contribution on a key historical shift in modern life. The nuance of McCrossen’s argument is complimented by a variety of rich visual examples of clocks, advertisements and urban streetscapes.”

"Marking Modern Times makes important contributions to American history, the history of technology as well as the history of communication, culture, and media, and to urban history and the study of public space."

"McCrossen’s study  . . . is the first to fully address the supply side of the question: how was a standard and authoritative horological time marketed and distributed in the nineteenth century, by whom, and to whom? . . . By combining manufacturing and import data with probate records, newspaper accounts, visual images, and even fiction, McCrossen constructs an authoritative narrative of how and where time and timepieces were distributed in the period."

List of Illustrations
Acknowledgments
Introduction Unveiling the Jewelers’ Clock
One Time’s Tongue and Hands: The First Public Clocks in the United States
Two Clockwatching: The Uneasy Authority of Clocks and Watches in Antebellum America
Three Republican Heirlooms, Instruments of Modern Time Discipline: Pocket Watches during and after the Civil War
Four Noon, November 18, 1883: The Abolition of Local Time, the Debut of a National Standard
Five American Synchronicity: Turn-of-the-Century Tower Clocks, Street Clocks, and Time Balls
Six Monuments and Monstrosities: The Apex of the Public Clock Era

Epilogue Content to Look at My Watch: The End of the Public Clock Era
Notes
Index
Back to top