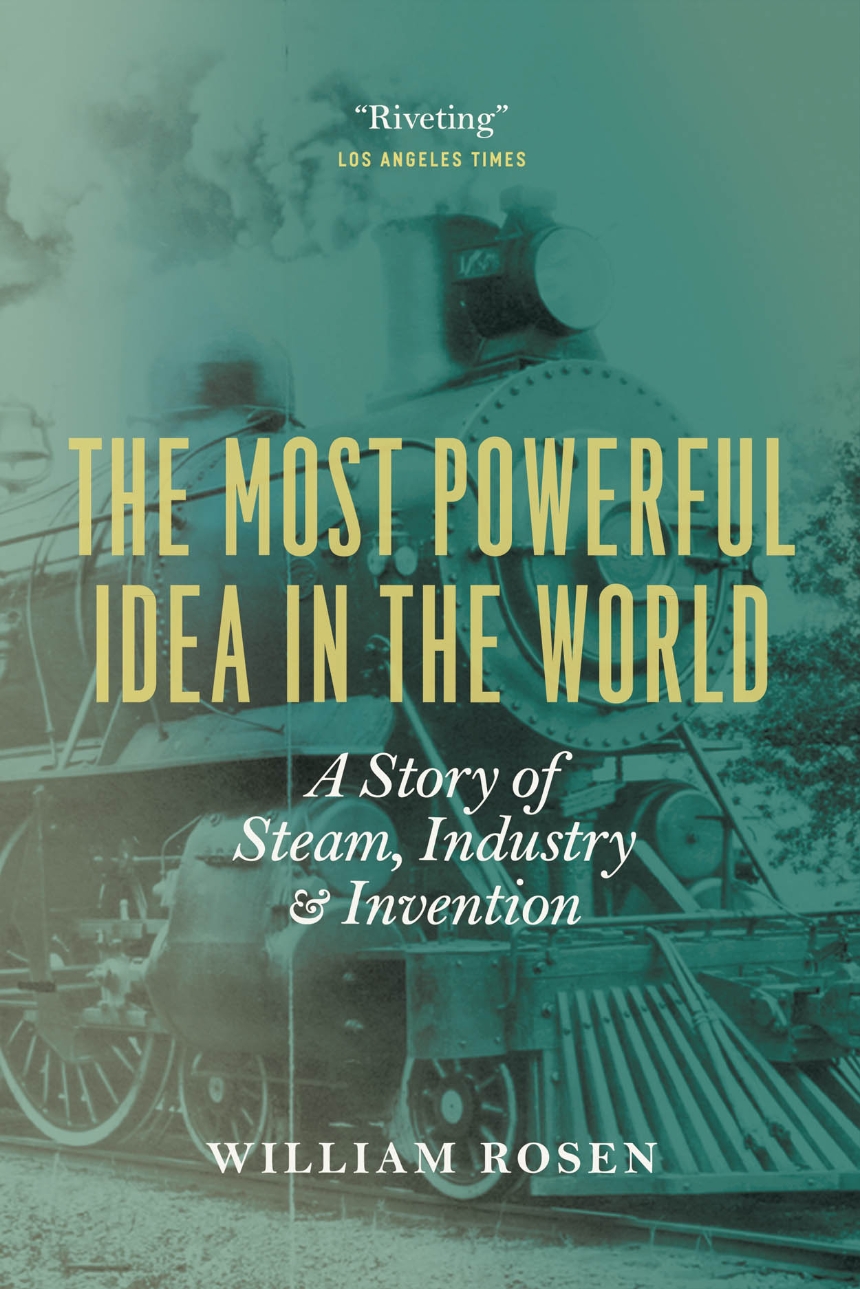 The Most Powerful Idea in the World

A Story of Steam, Industry, and Invention

The Most Powerful Idea in the World

A Story of Steam, Industry, and Invention

Hardly a week passes without some high-profile court case that features intellectual property at its center. But how did the belief that one could own an idea come about? And how did that belief change the way humankind lives and works?

William Rosen, author of Justinian’s Flea, seeks to answer these questions and more with The Most Powerful Idea in the World. A lively and passionate study of the engineering and scientific breakthroughs that led to the steam engine, this book argues that the very notion of intellectual property drove not only the invention of the steam engine but also the entire Industrial Revolution: history’s first sustained era of economic improvement. To do so, Rosen conjures up an eccentric cast of characters, including the legal philosophers who enabled most the inventive society in millennia, and the scientists and inventors—Thomas Newcomen, Robert Boyle, and James Watt—who helped to create and perfect the steam engine over the centuries. With wit and wide-ranging curiosity, Rosen explores the power of creativity, capital, and collaboration in the brilliant engineering of the steam engine and how this power source, which fueled factories, ships, and railroads, changed human history.

Deeply informative and never dull, Rosen’s account of one of the most important inventions made by humans is a rollicking ride through history, with careful scholarship and fast-paced prose in equal measure.

“Rosen has a facility for the telling anecdote and the quirky aside. Open nearly any page of the book and you’ll learn tidbits like that Abraham Lincoln had a love of things mechanical and is the only American president to be awarded a patent (for air chambers that add buoyancy to steam ships and other boats). . . . The Most Powerful Idea in the World is enjoyable reading, although it does go into a lot of detail about steam engines, and you will learn more about how they work than you might expect.”

Chapter One
CHANGES IN THE ATMOSPHERE
concerning how a toy built in Alexandria failed to inspire, and how a glass tube made in Italy succeeded; the spectacle of two German hemispheres attached to sixteen German horses; and the critical importance of nothing at all

Chapter Two
A GREAT COMPANY OF MEN
concerning the many uses of a piston; how the world’s first scientific society was founded at a college with no students; and the inspirational value of armories, Nonconformist preachers, incomplete patterns, and snifting valves

Chapter Three
THE FIRST AND TRUE INVENTOR
concerning a trial over the ownership of a deck of playing cards; a utopian fantasy island in the South Seas; one Statute and two Treatises; and the manner in which ideas were transformed from something one discovers to something one owns

Chapter Four
A VERY GREAT QUANTITY OF HEAT
concerning the discovery of fatty earth; the consequences of the deforestation of Europe; the limitations of waterpower; the experimental importance of a Scotsman’s ice cube; and the search for the most valuable jewel in Britain

Chapter Five
SCIENCE IN HIS HANDS
concerning the unpredictable consequences of sea air on iron telescopes; the power of the cube-square law; the Incorporation of Hammermen; the nature of insight; and the long-term effects of financial bubbles

Chapter Six
THE WHOLE THING WAS ARRANGED IN MY MIND
concerning the surprising contents of a Ladies Diary; invention by natural selection; the Flynn Effect; neuronal avalanches; the critical
distinction between invention and innovation; and the memory of a stroll on Glasgow Green

Chapter Seven
MASTER OF THEM ALL
concerning differences among Europe’s monastic brotherhoods; the unlikely contribution of the brewing of beer to the forging of iron; the geometry of crystals; and an old furnace made new

Chapter Eight
A FIELD THAT IS ENDLESS
concerning the unpredictable consequences of banking crises; a Private Act of Parliament; the folkways of Cornish miners; the difficulties in converting reciprocating into rotational motion; and the largest flour mill in the world

Chapter Nine
QUITE SPLENDID WITH A FILE
concerning the picking of locks; the use of wood in the making of iron, and iron in the making of wood; the very great importance of very small errors; blocks of all shapes and sizes; and the tool known as “the Lord Chancellor”

Chapter Ten
TO GIVE ENGLAND THE POWER OF COTTON
concerning the secret of silk spinning; two men named Kay; a child called Jenny; the breaking of frames; the great Cotton War between Calcutta and Lancashire; and the violent resentments of stocking knitters

Chapter Eleven
WEALTH OF NATIONS
concerning Malthusian traps and escapes; spillovers and residuals; the uneasy relationship between population growth and innovation; and the limitations of Chinese emperors, Dutch bankers, and French revolutionaries

Chapter Twelve
STRONG STEAM
concerning a Cornish Giant, and a trip up Camborne Hill; the triangular relationship between power, weight, and pressure; George Washington’s flour mill and the dredging of the Schuylkill River; the long trip from Cornwall to Peru; and the most important railroad race in history

Epilogue
THE FUEL OF INTEREST