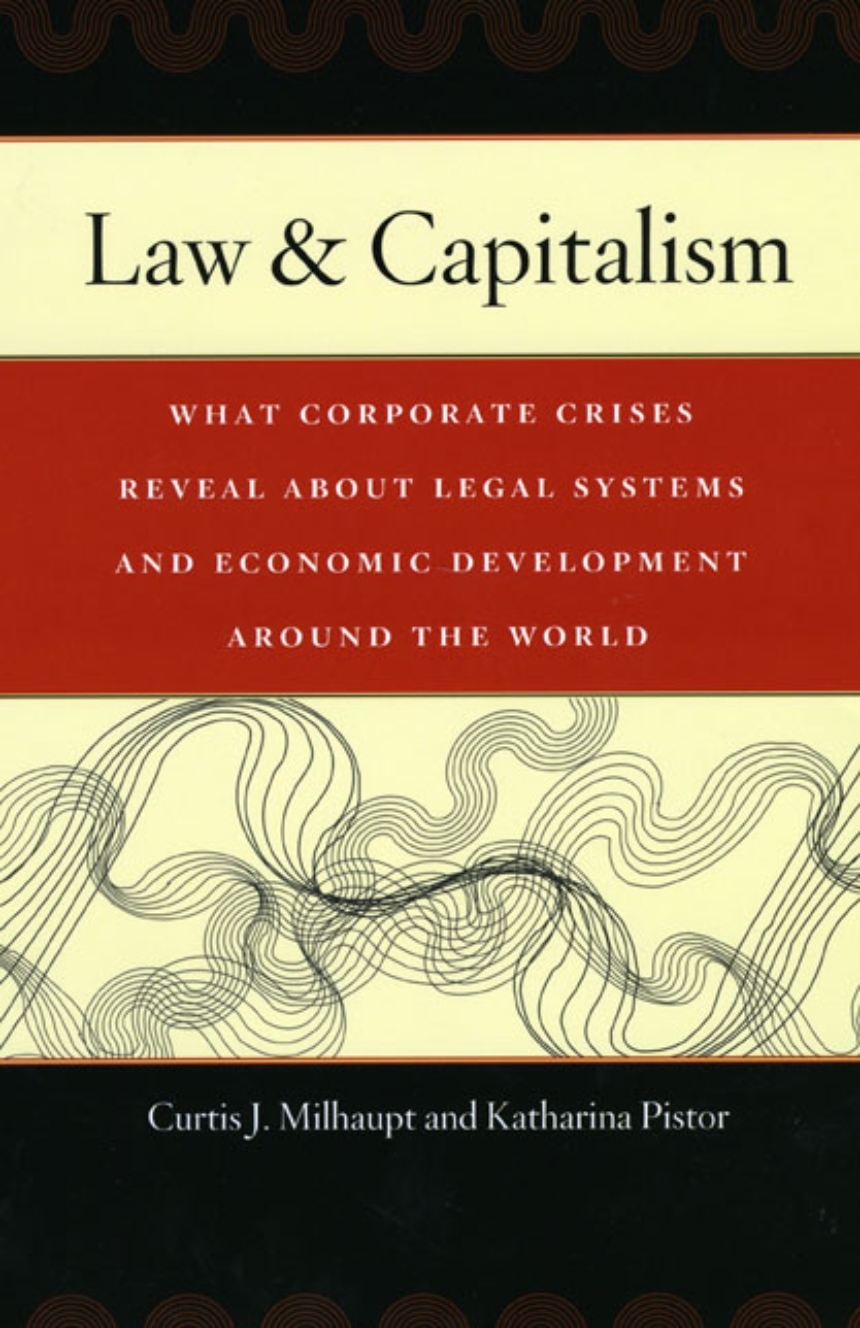 Recent high-profile corporate scandals—such as those involving Enron in the United States, Yukos in Russia, and Livedoor in Japan—demonstrate challenges to legal regulation of business practices in capitalist economies. Setting forth a new analytic framework for understanding these problems, Law and Capitalism examines such contemporary corporate governance crises in six countries, to shed light on the interaction of legal systems and economic change. This provocative book debunks the simplistic view of law’s instrumental function for financial market development and economic growth.
Using comparative case studies that address the United States, China, Germany, Japan, Korea, and Russia, Curtis J. Milhaupt and Katharina Pistor argue that a disparate blend of legal and nonlegal mechanisms have supported economic growth around the world. Their groundbreaking findings show that law and markets evolve together in a “rolling relationship,” and legal systems, including those of the most successful economies, therefore differ significantly in their organizational characteristics. Innovative and insightful, Law and Capitalism will change the way lawyers, economists, policy makers, and business leaders think about legal regulation in an increasingly global market for capital and corporate governance.

Law and Legal Studies: Law and Economics, Law and Society

“Original, important, and topical. Milhaupt and Pistor are drawing on their very considerable expertise by bringing together a wide range of different country contexts. Few others could cover America, Russia, western Europe and east Asia as they do here.  They also make an important theoretical contribution to the debate over different national types of capitalism.”

“Two of the world’s best scholars in law and economic development have teamed up to explain how different governments try to promote economic growth. They focus on coordinating and protecting investors through corporate and securities laws and policies. The ‘institutional autopsies’—case studies of firm-level scandals around the world like Enron—engage the reader and draw the general out of the particular. You enjoy this book as you learn from it.”

“This pathbreaking book takes seriously the need to understand the relationship between law and the economy as a dynamic process. In so doing, the authors articulate a rich and multifaceted account that is at once innovative and deeply grounded in their extraordinary wealth of insights into world legal systems. It will be required reading for anyone engaged in serious study of corporate and comparative law.”

"The title of Law & Capitalism, a remarkable new book . . . might seem to suggest that Millhaupt and Pistor are adding their voices to the choir. If this is what one were expecting, however, that expectation would quickly be dashed. Nearly every page of Law & Capitalism stands in implicit or explicit dissent from the prevailing view."

"A well-written and fascinating book on how legal systems vary across capitalist regimes. The authors . . . are two legal scholars who use corporate governance as the lens through which to observe the complex web of institutional dynamics that are woven together by law, economics, finance, firms, labor, and governments. . . . We would highly recommend this book to students of corporate governance, law, economics, and finance. It is a pleasure to read, because it combines a sophisticated and comprehensive conceptual model with very interesting and intricate case studies."

Part I: From Weber to the World Bank, and Beyond
One: The Prevailing View: Impact, Assumptions, and Problems
Two: Rethinking the Relation between Legal and Economic Development