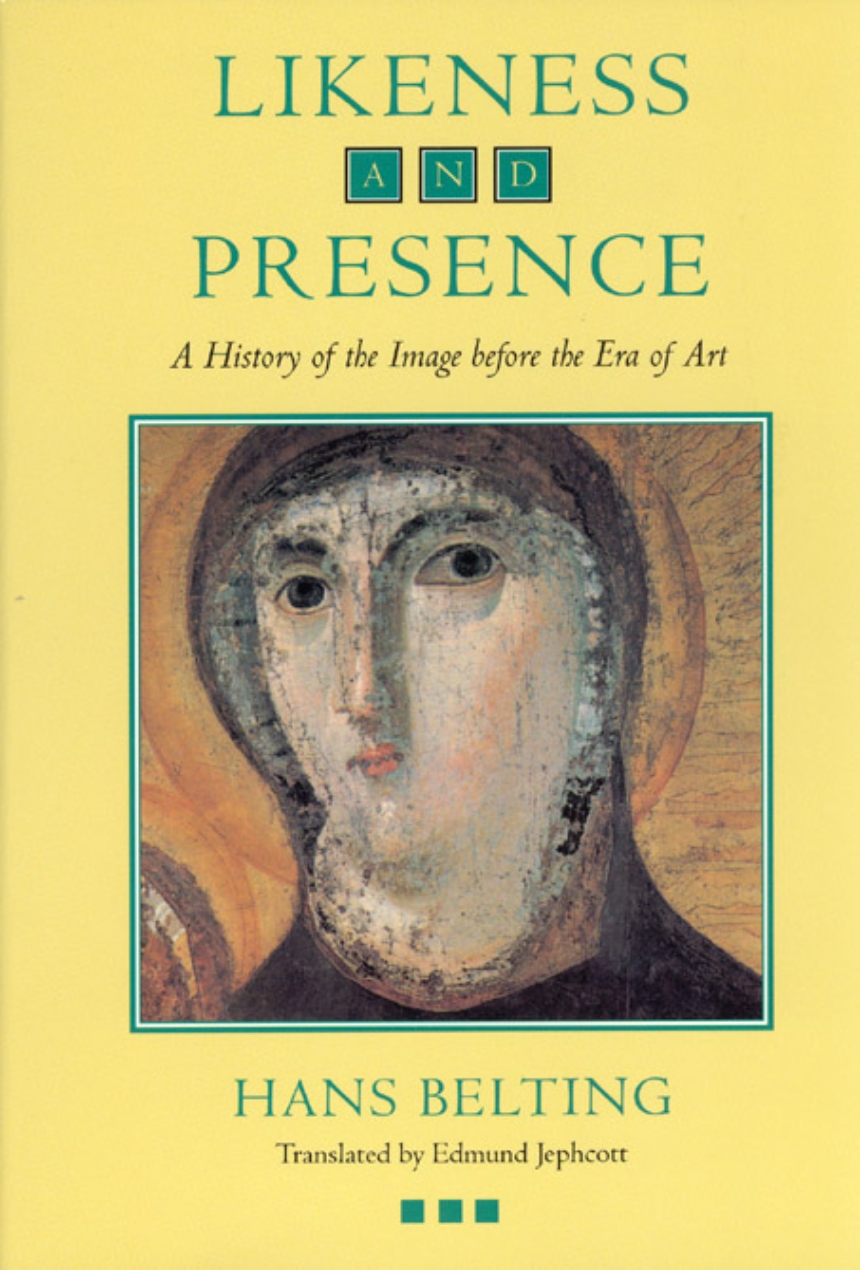 A History of the Image before the Era of Art

A History of the Image before the Era of Art

Translated by Edmund Jephcott
Before the Renaissance and Reformation, holy images were treated not as "art" but as objects of veneration which possessed the tangible presence of the Holy. In this magisterial book, Hans Belting traces the long history of the sacral image and its changing role in European culture.
Likeness and Presence looks at the beliefs, superstitions, hopes, and fears that come into play as people handle and respond to sacred
images, and presents a compelling interpretation of the place of the image in Western history.

"A rarity within its genre—an art-historical analysis of iconography which is itself iconoclastic. . . . One of the most intellectually exciting and historically grounded interpretations of Christian iconography." —Graham Howes, Times Literary Supplement

"I cannot begin to describe the richness or the imaginative grandeur of Hans Belting's book. . . . It is a work that anyone interested in art, or in the history of thought about art, should regard as urgent reading. It is a tremendous achievement."—Arthur C. Danto, New Republic

"I cannot begin to describe the richness or the imaginative grandeur of Hans Belting’s book. . . . It is a work that anyone interested in art, or in the history of thought about art, should regard as urgent reading. It is a tremendous achievement."

"An opus magnum, one of those works of art history that can be counted among the books of the decade."

List of Illustrations
Foreword
1: Introduction
a: The Power of Images and the Limitations of Theologians
b: Portrait and Memory
c: The Images’ Loss of Power and Their New Role as Art
2: The Icon from a Modern Perspective and in Light of Its History
a: The "Painter’s Manual of Mount Athos" and Romanticism
b: The Rediscovery of the Icon in Russia
c: Italian Panel Painting as the Heir to the Icon
d: The Discoveries in Rome and at Mount Sinai
e: Problems with a History of the Icon: The Deficiency of a History of Styles
3: Why Images? Imagery and Religion in Late Antiquity
a: The Virgin’s Icon; Icon Types and Their Meaning
b: The Virgin’s Personality in the Making: The Mother of God and the Mother of the Gods
c: Pagan Images and Christian Icons
d: Why Images?
4: Heavenly Images and Earthly Portraits: St. Luke’s Picture and "Unpainted" Originals in Rome and the Eastern Empire
a: Unpainted Images of Christ and Relics of Touch
b: St. Luke’s Images of the Virgin and the Concept of the Portrait
c: Relic and Image in Private and Public Life
d: Early Icons in Papal Rome
e: The Image of the "Hodegetria" in Constantinople
5: Roman Funerary Portraits and Portraits of the Saints
a: Pagan and Christian Cults of Images
b: The Origin of Saint’s Images
c: Cult Image and Votive Image
d: Funerary Portraits and Icons
e: Idealism and Realism in the Ancient Portrait
6: The Imperial Image in Antiquity and the Problem of the Christian Cult of Images
a: The Worship of the Imperial Image
b: The Emperor’s Person and the Legal Status of His Image
c: The Military Standard and the Cross as Bearers of Images
d: Images of Christ in State Iconography
7: Image Devotion, Public Relations, and Theology at the End of Antiquity
a: Wall Icons in a Roman Church
b: Early Panels in Rome and the Problem of an Iconic Style
c: Image and Politics at the Papal Curia
d: Styles and Conventions of the Early Icon
e: Icons and Politics at the Imperial Court: The Christ Coin
f: Icons and Theological Argument
8: Church and Image: The Doctrine of the Church and Iconoclasm
a: The Image in Christendom
b: Byzantine Iconoclasm
c: The Theory of Images and Its Traditions
d: Image and Sign, Icon and Cross
9: The Holy Image in Church Decoration and a New Policy of Images
a: The Role of the Imperial Court in the Reintroduction of Images
b: Patriarch Photius in Hagia Sophia
c: New Pictorial Programs in Churches of the Court
d: Church Decoration: An Applied Theory of Images
e: Liturgy and Images in Church Interiors
10: Pilgrims, Emperors, and Confraternities: Veneration of Icons in Byzantium and Venice
a: The Emperors
b: Confraternities and Processions
c: Pilgrimages and the Program for Visitors to Hagia Sophia
d: San Marco in Venice and Its Icons
11: The "Holy Face": Legends and Images in Competition
a: The "Original" of the Abgar Image and Its Legend
b: The Abgar Image at Constantinople and a New Aesthetics of the Ideal Portrait
c: The Veronica in Rome
12: The Iconostasis and the Role of the Icon in the Liturgy and in Private Devotion
a: The Church Interior and the Site of the Images
b: Cross, Gospel Book, and Icon in Church Ritual
c: Votive Images as Instruments of Salvation and as Commemorations of the Donor
d: The Chancel Screen as Iconostasis
e: Calendar Icons and Biographical Icons
13: "Living Painting": Poetry and Rhetoric in a New Style of Icons in the Eleventh and Twelfth Centuries
a: "Icons in the New Style"
b: Aesthetics, Ethics, and Theology
c: Poetic Continuity in a Changin