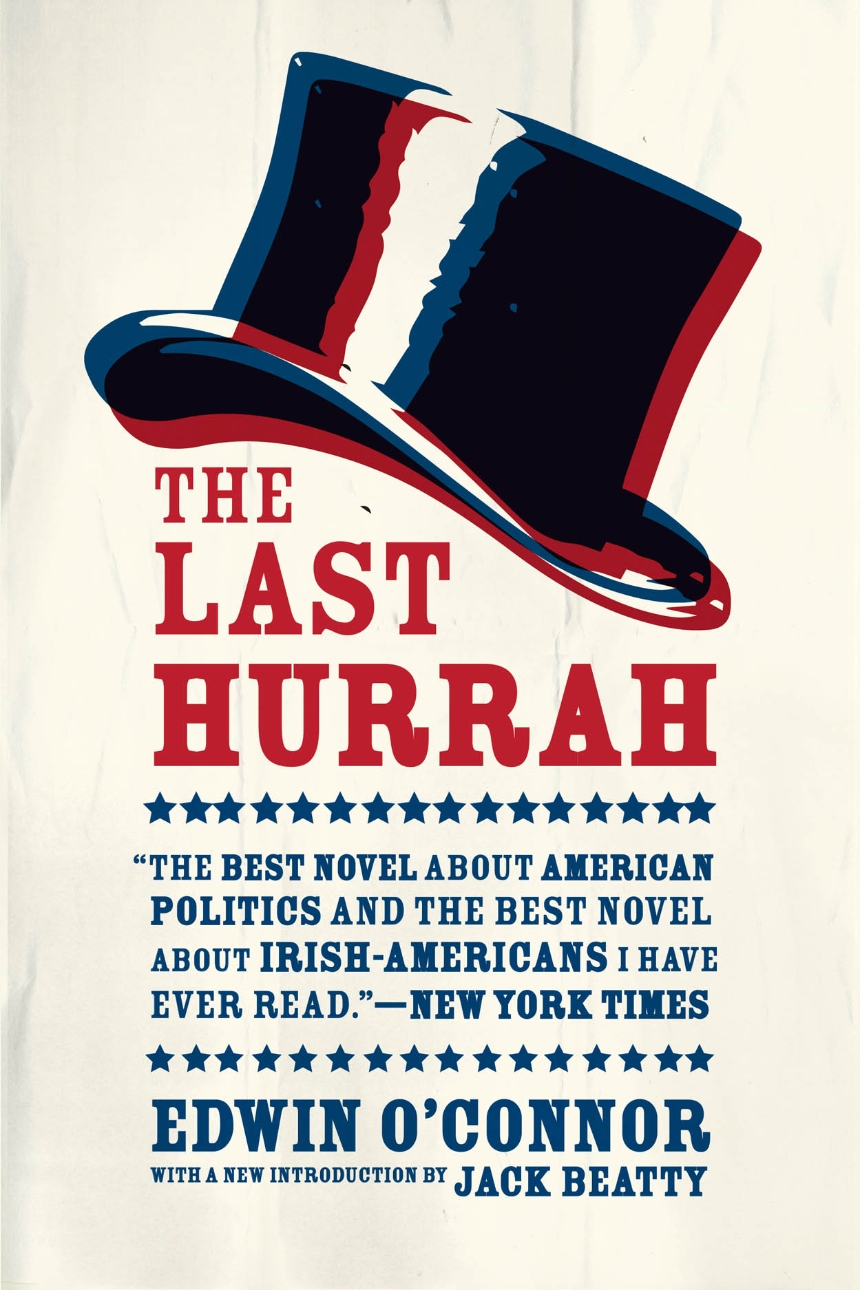 With an Introduction by Jack Beatty
“We’re living in a sensitive age, Cuke, and I’m not altogether sure you’re fully attuned to it.” So says Irish-American politician Frank Skeffington—a cynical, corrupt 1950s mayor, and also an old-school gentleman who looks after the constituents of his New England city and enjoys their unwavering loyalty in return. But in our age of dynasties, mercurial social sensitivities, and politicians making love to the camera, Skeffington might as well be talking to us.

Not quite a roman á clef of notorious Boston mayor James Michael Curley, The Last Hurrah tells the story of Skeffington’s final campaign as witnessed through the eyes of his nephew, who learns a great deal about politics as he follows his uncle to fundraisers, wakes, and into smoke-filled rooms, ultimately coming—almost against his will—to admire the man. Adapted into a 1958 film starring Spencer Tracy and directed by John Ford (and which Curley tried to keep from being made), Edwin O’Connor’s opus reveals politics as it really is, and big cities as they really were. An expansive, humorous novel offering deep insight into the Irish-American experience and the ever-changing nature of the political machine, The Last Hurrah reveals political truths still true today: what the cameras capture is just the smiling face of the sometimes sordid business of giving the people what they want.

“The best novel about American politics and the best novel about Irish-Americans I have ever read. . . . A superb job of vigorous, humorous writing—funny, engaging, and tolerantly mellow. . . . So good, so enormously readable, and so authoritatively persuasive.”

“Here, after a century of trying, is the first successful Irish-American novel. . . . Probably the funniest American book in a decade.”

“Here is a remarkably intelligent, informed, well-conceived, and highly readable story of the last campaign of a political boss, old style, in an unnamed but easily recognizable eastern city. . . . A splendid inside job on big city politics. It establishes O’Connor as one of our most gifted interpreters of American life.”

“In today’s soulless, prefabricated, follow-the-polling-data political environment, The Last Hurrah is a reminder of where we came from and how we got here. . . . O’Connor’s marking of the end of an era is still relevant, prescient in its gloomy foretelling of cultural change. . . . The Last Hurrah is the rich story of personality- and class-driven politics, now footnotes in contemporary culture.”

“Political novels aren’t what they used to be, no doubt because truth really is stranger than fiction nowadays. But three of the top-selling American political novels of the twentieth century, Allen Drury’s Advise and Consent, Edwin O’Connor’s The Last Hurrah, and Robert Penn Warren’s All the King’s Men, continue to be read and remembered to this day, doubtless in part because they were all turned into Hollywood movies. Alas, none of those movies was worthy of its source material. . . . Poets, Shelley wrote, are ‘the unacknowledged legislators of the world.’ I wouldn’t go that far, or anywhere near it. But when you consider how completely the pundit class failed to get the primaries right, I’d be more inclined to seek political wisdom in the pages of a novel.”

“Take a breather from the daily pounding of politics and reflect: chaos, confusion, and gutter campaigning are not new. Settle for a while into fine American fiction for perspective. Great novelists define and hone truths of human experience often more sharply than the days’ debates. . . . Another poignant tale of American politics is The Last Hurrah by Edwin O’Connor. Set in an old and mainline northeastern city, the novel examines the dying days of machine politics when largess held voters in sway. Frank Skeffington, 72, believes he is entitled to one more term. His political compass loses its bearing against a young, charismatic challenger, void of political experience but adorned with war medals and good looks. O’Connor’s 1956 novel was prescient in portraying the impact television would have on politics. . . . It raises good questions about how religion, ethnicity, class and economics foster into political alliance—questions still relevant starting even at the city and county level.”

“Some book deliveries are EVER so much better than others. . . .”

“In [The] Last Hurrah, the local political landscape has changed making . . . Frank Skeffington a sad anachronism, and, ultimately, the election loser. Both the book and the film offer quite a tutorial in ‘retail politics,’ as traditionally practiced, which Nate Bates for Mayor does, too. . . . One thing is certain. Without campaign finance reform of the sort advocated by Bernie Sanders and Jill Stein in their current presidential campaigns, there’ll be no last hurrah for big money in politics, in our city of 100,000 or anywhere else in America, anytime soon.”

"A great and indispensable novel of old-style American politics."

"[One of] the top twenty books every Irish American should read. . . . This story of Frank Skeffington's final run for office gives a probing look into the Irish political machines."

“A character study of a seemingly irreconcilable but entirely believable figure: a corrupt swindler, incorrigible liar, empathetic friend, mercurial genius, and veritable man of the people. Skeffington’s success as an administrator is disputed, but the size of his character endears him even to his enemies.”

“The absolutely winning production of this, the best reprint of 2016 includes a rollicking Introduction by Jack Beatty, an understated, smile-inducing new cover design, and of course the main event, O’Connor’s utterly masterful dark comedy of American politics, which is as funny and insightful today as it was the year it was written.”