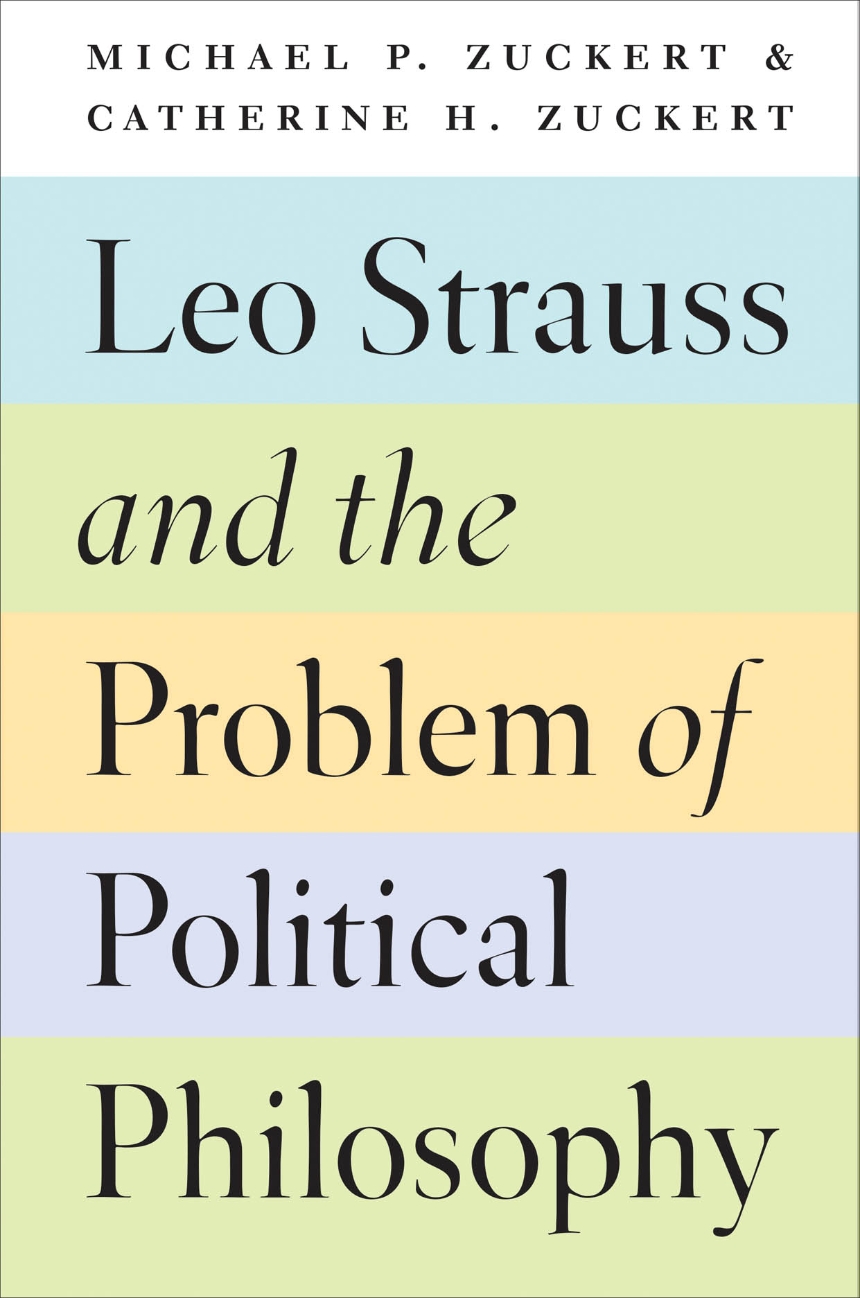 Leo Strauss and the Problem of Political Philosophy

Leo Strauss and the Problem of Political Philosophy

Leo Strauss and his alleged political influence regarding the Iraq War have in recent years been the subject of significant media attention, including stories in the Wall Street Journal and New York Times.Time magazine even called him “one of the most influential men in American politics.” With The Truth about Leo Strauss, Michael and Catherine Zuckert challenged the many claims and speculations about this notoriously complex thinker. Now, with Leo Strauss and the Problem of Political Philosophy, they turn their attention to a searching and more comprehensive interpretation of Strauss’s thought as a whole, using the many manifestations of the “problem of political philosophy” as their touchstone.
For Strauss, political philosophy presented a “problem” to which there have been a variety of solutions proposed over the course of Western history. Strauss’s work, they show, revolved around recovering—and restoring—political philosophy to its original Socratic form. Since positivism and historicism represented two intellectual currents that undermined the possibility of a Socratic political philosophy, the first part of the book is devoted to Strauss’s critique of these two positions. Then, the authors explore Strauss’s interpretation of the history of philosophy and both ancient and modern canonical political philosophers, including Plato, Aristotle, Machiavelli, and Locke. Strauss’s often-unconventional readings of these philosophers, they argue, pointed to solutions to the problem of political philosophy. Finally, the authors examine Strauss’s thought in the context of the twentieth century, when his chief interlocutors were Schmitt, Husserl, Heidegger, and Nietzsche.
The most penetrating and capacious treatment of the political philosophy of this complex and often misunderstood thinker, from his early years to his last works, Leo Strauss and the Problem of Political Philosophy reveals Strauss’s writings as an attempt to show that the distinctive characteristics of ancient and modern thought derive from different modes of solving the problem of political philosophy and reveal why he considered the ancient solution both philosophically and politically superior.

“The Zuckerts have done it again! Their new book establishes Strauss as being at the forefront of the great philosophic minds of the twentieth century.  This book not only makes Strauss’s writings clear and accessible, but raises him above the shabby polemics to which his thought has too often been subject. Their careful readings, together with a mastery of the entire corpus of Strauss’s work, will put this book on the top shelf for those interested in a serious engagement with Strauss the thinker.”

“Leo Strauss and the Problem of Political Philosophy offers a welcome exposition and defense of Strauss as a political philosopher. Given the considerable range and depth of Strauss’s writings, serious readers could use a reliable overview and a connecting thread for seeing their way through them. These the Zuckerts seek to provide. Of the recent books on Strauss, none matches this one in scope or detail.”

“In 2008 the Zuckerts published The Truth about Leo Strauss primarily to defend Strauss against the charge of being the ideological source behind unpopular initiatives within American foreign policy. This book seeks rather to explain Strauss’s political philosophy from within by showing the various influences to which he was responding and to test his philosophy for completeness and coherence. In this second project, they succeed admirably. . . . A fascinating study.”

“Essential. . . . Catherine Zuckert and Michael Zuckert have taken on the ambitious task of analyzing Leo Strauss’s entire intellectual career. The result is a very good introduction to Strauss’s published works. It is more than a summary of one of the twentieth century's most influential political theorists, however, as the Zuckerts attempt the even more ambitious goal of trying to reconcile Strauss's entire career into a coherent statement of his ultimate view of philosophy.”

“[The book] not only illuminates many fundamental issues but also gives readers more food for thought and wonderment.”

“The Zuckerts have succeeded beautifully. This latest effort will serve both as an excellent introduction for those unfamiliar with Strauss’s thought and influence and as a path to a much fuller understanding for those who are already familiar with some aspects of his works.”

Part I. Positivism and Historicism

Part II. Strauss and the Philosophers

Chapter Three Strauss’s Rereading of the History of Political Philosophy: An Overview
Chapter Four Reviving Western Civilization from Its Roots: Strauss’s Return to Premodern Thought
Chapter Five Strauss’s New Reading of Plato
Chapter Six Why Strauss Is Not an Aristotelian
Chapter Seven At the Crossroads: Strauss on the Coming of Modernity
Chapter Eight Strauss on Locke and the Law of Nature