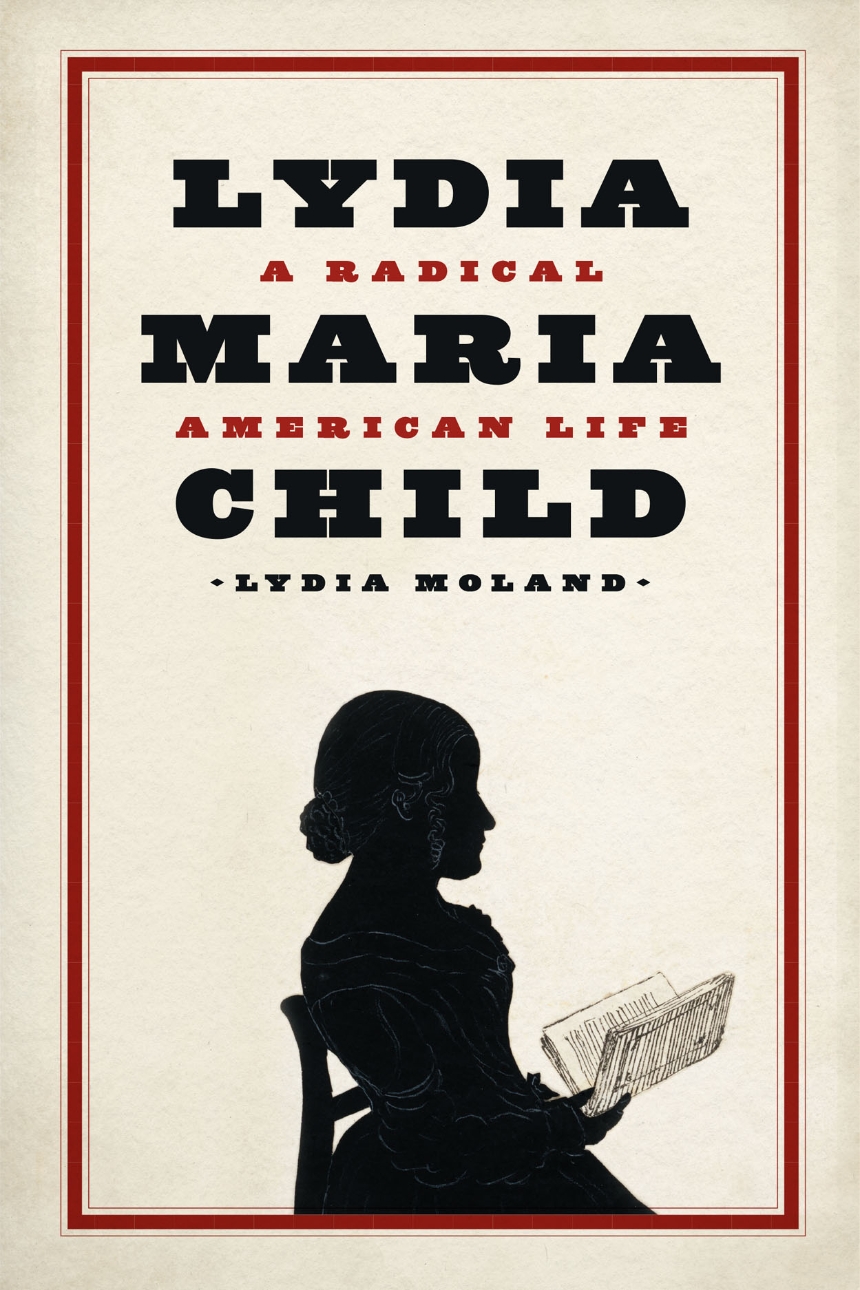 A compelling biography of Lydia Maria Child, one of nineteenth-century America’s most courageous abolitionists.

By 1830, Lydia Maria Child had established herself as something almost unheard of in the American nineteenth century: a beloved and self-sufficient female author. Best known today for the immortal poem “Over the River and through the Wood,” Child had become famous at an early age for spunky self-help books and charming children’s stories. But in 1833, Child shocked her readers by publishing the first book-length argument against slavery in the United States—a book so radical in its commitment to abolition that friends abandoned her, patrons ostracized her, and her book sales plummeted. Yet Child soon drew untold numbers to the abolitionist cause, becoming one of the foremost authors and activists of her generation.

Lydia Maria Child: A Radical American Life tells the story of what brought Child to this moment and the extraordinary life she lived in response. Through Child’s example, philosopher Lydia Moland asks questions as pressing and personal in our time as they were in Child’s: What does it mean to change your life when the moral future of your country is at stake? When confronted by sanctioned evil and systematic injustice, how should a citizen live? Child’s lifetime of bravery, conviction, humility, and determination provides a wealth of spirited guidance for political engagement today.

“Lydia Maria Child was one of the few great intellectual freedom fighters in nineteenth-century America. Moland’s magisterial book takes us in and through Child’s rich world and life in an exemplary manner. Don’t miss this powerful text on a giant still so relevant to our bleak times.”

“This is a biography on a mission. As Moland shows us, to discover Child is to discover ourselves, revealing the best and worst of who we are. Moland is at her best when eviscerating the flawed arguments of Child’s opponents, arguments that, she reminds us, are ubiquitous even today. This is a brilliantly written book: stylish, witty, barbed yet sympathetic.”

“Moland’s exuberant new biography gives us a Lydia Maria Child for the twenty-first century: a woman of fierce intelligence and astonishing ingenuity who never gave up the struggle to right the wrongs of enslavement and its legacy of race prejudice. Moland writes with a philosopher’s instinct to question both herself and the evidence she uncovers, yielding an intimate portrait that is also a history of America’s centuries-long reckoning with its founding principles.”

List of Illustrations
A Personal Prologue
1 By an American
2 A Love Not Ashamed of Economy
3 Let Us Not Flatter Ourselves
4 Of Mobs and Marriages
5 How Does it Feel to Be a Question?
6 On Resistance
7 The Workshop of Reform
8 On Quitting and Not Giving Up
9 First Duties First, and How to Do Your Second Duties Too
10 Keep Firing
11 On Delicate Ears and Indelicate Truths
12 A Warning or an Example
13 No Time for Ovations
14 Truly Living Now
Epilogue
Acknowledgments
Illustration Credits
List of Abbreviations
Notes
Bibliography
Index
Excerpt

Later in her life, someone asked why. “Suffice it to say,” she replied, “that some associations of childhood make the name of Lydia unpleasant to me.” It would not have been hard for some Lydia or other to make a bad impression: in nineteenth-century America, Lydias were everywhere. This Lydia herself had a great-grandmother, a grandmother, and an aunt by that name. As an adult, she would add a mother-in-law, a sister-in-law, a niece, and several namesakes to the chorus of Lydias around her. They were ubiquitous outside her family, too. Perhaps this is why her con-temporary Ralph Waldo Emerson, whose second wife was named Lydia, rechristened her Lidian. The marriage went downhill from there.

This Lydia would not wait for a man to rename her. By the time she was twenty, she had done it herself. But for now, Lydia Francis was the only name she had. And so until, by way of a religious quest and a complicated marriage, she became known to the world as L. Maria Child, Lydia Francis would have to do.

She was born on February 11, in Medford, Massachusetts. Medford was a small town on the Mystic River at the intersection of six colonial highways, about five miles northwest of Boston. The year was 1802. The American Revolution, with all its glory and uncertainty, was still in the recent past. The war was a vivid memory to her parents, who had both been ten years old when it started. Her father’s father had fought against the British, distinguishing himself at the battles of Lexington and Concord by killing five enemy soldiers. Her mother’s family had fled Charlestown during the Battle of Bunker Hill as the city burned behind them. There had been real poverty during those years— her father remembered that one winter, had a neighbor not shared extra potatoes with him and his nine siblings, they might well have starved. But now the war was over. Her parents had been born British subjects, but now they were American citizens, free and clear.

And what kind of country was the United States of America? In many ways, it was too early to tell. When Lydia Francis was born, Thomas Jefferson, America’s third president, was entering the second year of his first term in office. Already the country had weathered several crises that threatened its fragile union. Often those crises had to do with the fact that, despite Jefferson’s own soaring rhetoric about the self-evidence of human equality, by the time he took office almost a million humans were enslaved in the country whose ideals he was pledged to defend…
As her world began to take shape around her, little Lydia Francis began to recognize her immediate family. In addition to her parents, Convers Sr. and Susannah, there were four older children: James, Susannah, Mary, and Convers Jr. Of her siblings, probably Convers came into focus first. He was almost seven when she was born; one baby had died between their births. He seems to have taken being displaced by a younger child well, emerging early in his little sister’s memories as affectionate and attentive even as other family members were perhaps too busy to mind her. Their father had by now fought his way out of poverty through the system of apprenticeship and had, at long last, become a prosperous baker. He was even famous: his “Medford crackers”— a buttery, crunchy, labor-intensive biscuit— were sold throughout the Northeast and exported in large quantities to England. The family lived in a two-story house across the street from the local cemetery, where at least one ancestral Lydia was buried. Next to their house was the bakery, a sign hanging in front for passersby to see.

One of Lydia’s earliest memories was of almost dying. Some “long, protracted” sickness had taken hold, and the doctor had given up. She had, she remembered, been “laid away for dead.” What had that been like? Had she sensed her family sorrowing over her, her mother weeping but resigned, the room emptying as she fought alone against the fever or infection that was sapping her strength? Whatever it was, at some point her tiny body turned it back. Perhaps she opened her eyes in a dark room and became conscious of muffled activity downstairs. Or perhaps Convers was sitting there watching. Her illness had not killed her; it had made her stronger. Thereafter, her constitution was “hardy as an oak.”
Her parents were hardworking, frugal people. They had, she recalled, “small opportunity for culture”; there had been “nothing like literary influence in the family, or its surroundings.” There was, of course, religion. The Francis family, like most people in the town, were Congregationalists, which meant they were Calvinists. This in turn involved a crushing belief that humans were fundamentally sinful, in many cases destined for a very real and eternal hell. No one could evade suspicion of damnation, but if you were prosperous, you might convince yourself and others that God favored you. And so people like Convers Francis Sr. worked very, very hard to prosper, resulting in a work ethic that became as famous as the goods it produced.

It was the job of the Reverend David Osgood, minister of Medford’s First Parish Church, to deliver this message of uncertain salvation to the town’s sinful but striving inhabitants. Indeed, Lydia long recalled her minister’s ominous weekly incantations along with his shining white hair. But it seems that by the time she was old enough to remember, his message had also softened. Like many near Boston, he was being drawn to an interpretation of Christianity—soon to be known as Unitarianism— that depicted God as more loving than punishing and humans as capable of both freedom and goodness. But whatever their minister’s reformist tendencies were, Lydia’s father never lost his belief in hell or his conviction that his children might go there. Once a month, she and Convers were sent to Reverend Osgood to recite the old-fashioned catechism that promised as much. There she also encountered his daughters— Mary and Lucy— a few years older than she and clearly very bright. She must have watched the daughters of this learned man— growing up in a household full of books and ideas— with a mixture of admiration and envy. It seems that the fascination was mutual: well into adulthood, the Osgood sisters remembered the baker’s daughter who recited her catechism in their home as exhibiting considerable spirit and spunk.