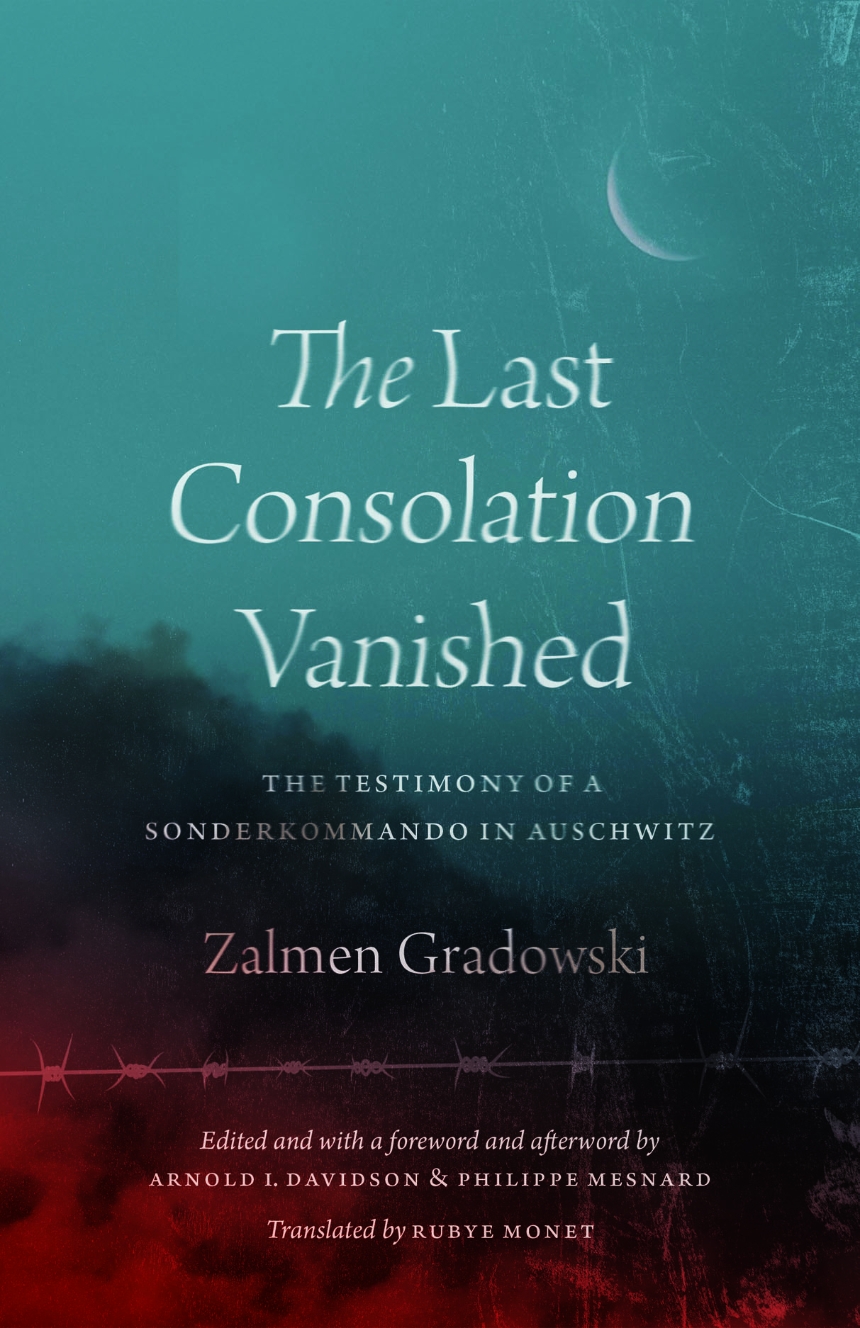 The Testimony of a Sonderkommando in Auschwitz

Edited by Arnold I. Davidson and Philippe Mesnard
Translated by Rubye Monet

The Testimony of a Sonderkommando in Auschwitz

Edited by Arnold I. Davidson and Philippe Mesnard
Translated by Rubye Monet

A unique and haunting first-person Holocaust account by Zalmen Gradowski, a Sonderkommando prisoner killed in Auschwitz.

On October 7, 1944, a group of Jewish prisoners in Auschwitz obtained explosives and rebelled against their Nazi murderers. It was a desperate uprising that was defeated by the end of the day. More than four hundred prisoners were killed. Filling a gap in history, The Last Consolation Vanished is the first complete English translation and critical edition of one prisoner’s powerful account of life and death in Auschwitz, written in Yiddish and buried in the ashes near Crematorium III.

Zalmen Gradowski was in the Sonderkommando (special squad) at Auschwitz, a Jewish prisoner given the unthinkable task of ushering Jewish deportees into the gas chambers, removing their bodies, salvaging any valuables, transporting their corpses to the crematoria, and destroying all evidence of their murders. Sonderkommandos were forcibly recruited by SS soldiers; when they discovered the horror of their assignment, some of them committed suicide or tried to induce the SS to kill them. Despite their impossible situation, many Sonderkommandos chose to resist in two interlaced ways: planning an uprising and testifying. Gradowski did both, by helping to lead a rebellion and by documenting his experiences. Within 120 scrawled notebook pages, his accounts describe the process of the Holocaust, the relentless brutality of the Nazi regime, the assassination of Czech Jews, the relationships among the community of men forced to assist in this nightmare, and the unbearable separation and death of entire families, including his own. Amid daily unimaginable atrocities, he somehow wrote pages that were literary, sometimes even lyrical—hidden where and when one would least expect to find them.

The October 7th rebellion was completely crushed and Gradowski was killed in the process, but his testimony lives on. His extraordinary and moving account, accompanied by a foreword and afterword by Philippe Mesnard and Arnold I. Davidson, is a voice speaking to us from the past on behalf of millions who were silenced. Their story must be shared.

“The degradations of the death camps, and the prospect of his own imminent end, propel Zalmen Gradowski to an act of witness that rises now and then to Biblical heights of eloquence. To read this tragically riven collaborator in the Holocaust is to be shaken to the bone.”

“These two historically precise and shattering Yiddish-language testimonies by Zalmen Gradowski rank among the most important documents of the twentieth century. An outstanding translation by Monet, and two fine essays accompanied by a superb critical apparatus by editors Davidson and Mesnard bring these documents of murder and resistance to life like no edition before. The outcome is a major achievement in Holocaust historiography.”

Robert Jan van Pelt, author of 'The Case for Auschwitz'

The members of the Sonderkommando belong to a community of witnesses who, erased from history, drift between different memorial communities without ever being fully welcomed, even today, and have for a long time been actively rejected. They cannot be considered entirely as victims because they also collaborated in the atrocities, albeit forced to do so by the Nazis. Nor have they been recognized as heroes, despite being the architects of one of the most hopeless revolts in human history, the October 7, 1944, uprising against the SS.

This foreword covers the troubled reception of the testimonies written and buried by members of the Auschwitz Sonderkommando before focusing specifically on Zalmen Gradowski’s manuscripts. But first, it presents in broad brushstrokes the history of the Sonderkommando and how they were vilified as something less than human and relegated to our cultural imagery of Hell, before becoming part of the historical record.

Between 1943 and 1945, a group of Jewish deportees —together with a few Poles and some Soviet prisoners of war who had recently arrived at Auschwitz concentration camp—were conscripted to form the Sonderkommando. The first experiments with Zyklon B gas were carried out on a few hundred Russian prisoners of war and some sick inmates, initially in the underground Block 11 in the main camp, and then later in waves of sporadic elimination in Crematorium I. After this, it became clear that the mass murders would be perpetrated in the neighboring camp of Birkenau in its perfected gas chambers and ovens. The four buildings were up and running by spring 1943 at the north end of the camp, after two farms on the outskirts of Birkenwald had initially served as temporary gas chambers. The extermination operations reached their peak in spring–summer 1944, when convoys of Hungarian Jews arrived in Auschwitz. In about two months, including the last convoy on July 9, 1944, Hungarian military officials, under the guidance of German SS officials, deported around 438,000 Jews from Hungary. Most of them were taken to Auschwitz-Birkenau, where upon arrival and after the so-called “selection,” around 394,000 were killed in the gas chambers.

At that time, with a team of up to 900 detainees separated into two shifts, the Sonderkommando kept the wheels of this death machine turning without interruption. Even though the precise number cannot be known, it is estimated that about 2,200 prisoners were in the Sonderkommando at Auschwitz. Day after day, they participated in the destruction of their own people, the “Final Solution,” while unable to reveal the truth to them, on pain of brutal death in front of the whole group of Sonderkommando. They also facilitated the murder of prisoners deemed no longer capable of work during selections in the blocks, mainly those having reached the limits of their physical and mental capacities who were designated as “Muselmänner” (sing. Muselmann, literally “Muslim”) in the camp jargon.

In exchange for performing these unbearable tasks, the men in the Sonderkommando benefited from better treatment than other deportees: they were fed, clothed, and given a bed, unlike many of the other prisoners. Some became used to the horrific work; others, few in number, committed suicide or were murdered. They mostly lived in extreme distress, but it would be a mistake to consider them as inhuman, unable to feel disgust at what they were forced to do or to feel empathy for those who were exterminated. Trapped in this untenable situation, some of the Sonderkommando planned an uprising at Auschwitz. There were similar revolts in two other death camps: in Treblinka on August 2, 1943, and in Sobibor on October 14, 1943, but none in any concentration camps. Actually, in the concentration camps, the Resistance networks, which were mainly communist, knew that it would be better to wait for the arrival of the Red Army rather than risking the strong probability of a massacre during a general uprising. This reticence is why the Jewish leaders of the Sonderkommando insurgence reproached these political prisoners in the camp’s clandestine network for not having supported the preparations for an uprising.

One of the most important figures of the Sonderkommando, Zalmen Lewental, described with great lucidity the anxiety created by the constant postponement of the insurrection while more Hungarian Jews were selected to be gassed upon arrival. He wrote that the political leaders of the Resistance network always took their time in responding to the demands of help from the Sonderkommando. Since these prisoners were not directly involved with the massacre of the Jews, the more the revolt could be delayed, the better it was for their strategy of waiting for the arrival of the Red Army. It is important to consider this situation in order to grasp the extent to which the Jews were abandoned. Not only did the Allies and European Resistance fighters outside the camps fail to save the Jews —showing even less interest in the Gypsies—but even inside the camps the communist Resistance, in a very pragmatic and non-empathetic assessment, did not want to consider the daily slaughter, of which they were fully aware.

From mid-January 1945, a hundred surviving members of the Sonderkommando managed to sneak in among the thousands of deportees being forcibly evacuated from the camp in the so-called Todesmärsche (death marches). Between January 20 and 26, the SS blew up what remained of the ovens and gas chambers so that all that was left of the machinery of destruction was rubble and ruin. As Gideon Greif has pointed out, there was no systematic effort to document the testimonies of members of the Sonderkommando.