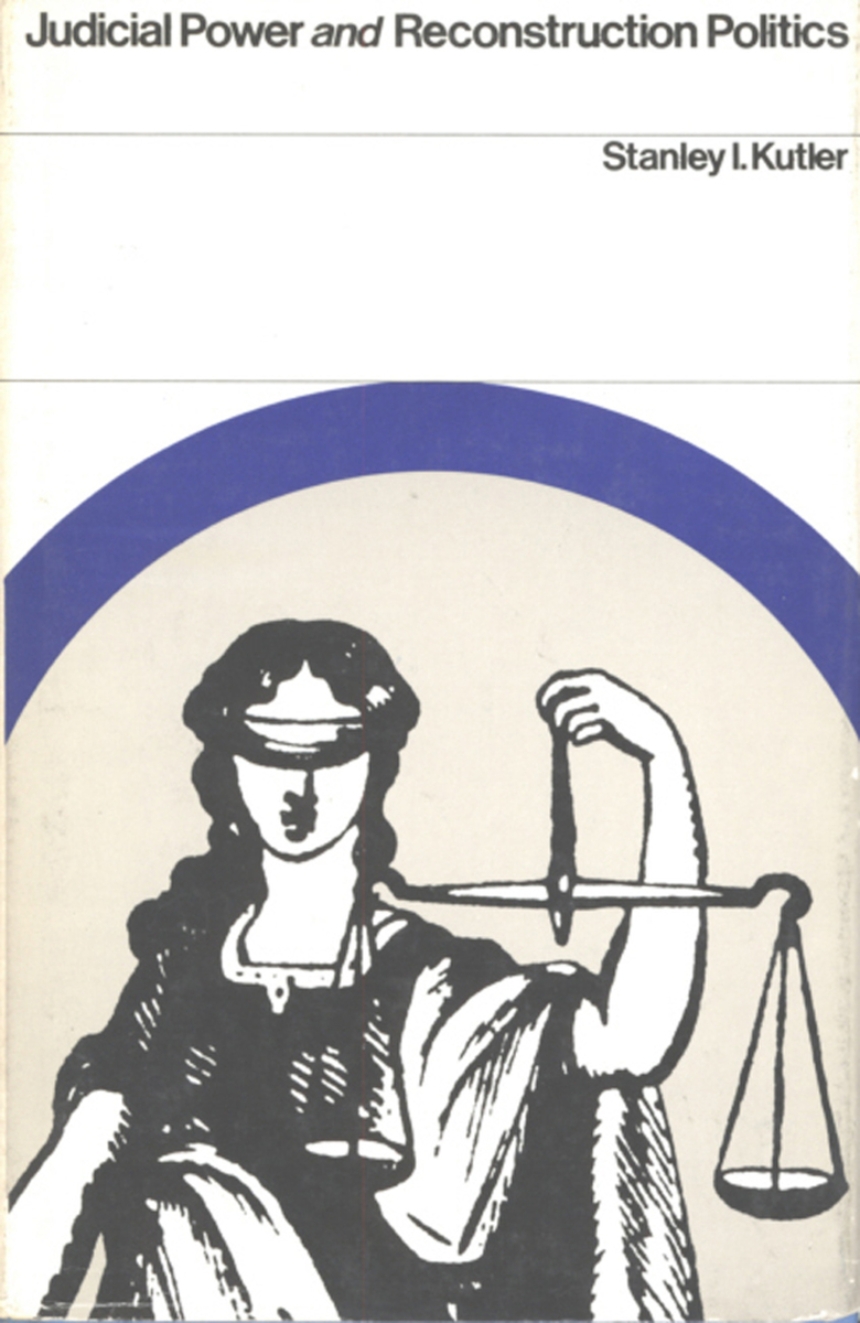 A study of the Supreme Court in the wake of the Dred Scott decision.

This book investigates the political and public standing of the Supreme Court following the Dred Scott decision. Arguing against interpretations by previous historians, Kutler asserts instead that the "Chase Court" was neither enfeebled by the decision itself, nor by congressional Republicans during reconstruction. Instead, Kutler suggests that during reconstruction, the Court was characterized by forcefulness and judicious restraint rather than timidity and cowardice, holding a creative and determining role rather than abdicating its rightful powers. This volume assembles a series of essays by Kutler arguing for this characterization. Provocative and persuasive at turns, this collection of essays provides a bold and innovative reinterpretation of the Supreme Court after the Civil War.

The historical accounting of the Reconstruction era has gone through remarkable transformations. Until recently, historians have shrouded the post-Civil War decade with a darkness-at-noon quality; it was known as the "tragic era" and was supposedly marked by a "blackout of honest government." And yet, contemporaries had recognized an obligation to the newly freed Negro, had regarded Andrew Johnson as a stubborn and possibly disloyal obstructionist, and had accepted the prominent Republicans and their works as faithful reflections of Lincolnian ideals. In recent years, interpretations have been coming back full circle to many of the contemporary evaluations. A new generation of historians, experiencing its own milieu of wars, social conflicts, and political tensions, has approached the Reconstruction period with a fresh spirit.

The sources and evidence now being explored are, of course, not new; they were readily available to earlier generations of scholars. The difference in their use is merely one of emphasis. Thus, Andrew Johnson was not necessarily a harassed, persecuted figure who clung to the flag and the Constitution and, in the long run, upheld the "right" positions. Eric McKitrick has argued, just as plausibly, that he was an inept, blundering, obstinate, even obtuse man whose thinking never came abreast of reality and the open character of constitutional questions. An Englishman, W. R. Brock, has offered a persuasive interpretation of the congressional Republicans and their program by relying primarily on the congressional debates, a source as old as the events themselves. In similar fashion, La Wanda and John Cox have demonstrated that concern for the Negro and civil rights was not a sham issue advocated exclusively by "Radical Republicans.

This new scholarship demonstrates that the story is by no means one-dimensional. No longer may we ascribe all good motives to Andrew Johnson and his supporting cast and all bad impulses to Radical Republicans and their ilk. Nor can we polarize the politics of the time and speak, on the one hand, of those who sought to undo everything of ante bellum America, and, on the other, of those who sought the preservation of all the best in American life, government, and institutions. In short, the story cannot be related as a simple contest between black and white—no matter how, without punning, one identifies the black and white.

Through the decades the history of the Supreme Court during Reconstruction has had a singular consistency, and this remains even now unchanged. Its origins can be traced as far back as the rantings of the outraged and isolated Democratic minority of the 1860's. William A. Dunning, one of the first serious students of the period, embellished the account with scholarly trappings at the turn of the century. Then Charles Warren, in his history of the Supreme Court, enriched the tale. And from these twin founts, writers on the Supreme Court during Reconstruction have uncritically drawn their facts and interpretations.

The long-accepted story has an alluring simplicity that neatly dovetails with the traditional image of the grossness and cynicism of the so-called Radical era. Two themes have dominated the historiography. There is, first, the notion that the Supreme Court was left as a weakened, if not impotent, institution in consequence of its disreputable Dred Scott decision of 1857, which denied Congress the power to prohibit slavery in the territories. Beyond this, the second view concedes an attempt, albeit feeble, by the Court to exert some influence over events but then finds the justices meekly retreating before threats of annihilation or reprisal from vindictive, determined, or even demonic Radicals. Claude G. Bowers, the politician-historian, conveniently summed up the story for a vast audience: "Never has the Supreme Court been treated with such ineffable contempt, and never has that tribunal so often cringed before the clamor of the mob." The concurrent ideas of intimidation and impotence thus form the bedrock for the traditional history of the Supreme Court from 1857 to about 1873. A survey of the relevant events which have substantiated these themes is in order as a point of reference—and then departure.

Charles Evans Hughes's description of the Dred Scott decision as a "self-inflicted wound" has been used to dramatize the Supreme Court's error and its sharp plunge in public esteem. However noble its intentions, the Court seemingly had acquired an affinity for the southern cause. Its image of impartiality now apparently melted in the heat and passion of the sectional conflict. Its dominant membership of southerners and "doughfaces" contributed further to its unpopularity. In short the Court had forfeited its credibility and moral authority in the North. When secession became a reality, the Court—so the story goes—lingered on as a decrepit relic of evil days gone by. Shorn of its prestige and respect, it had an ignominious part in the Civil War and Reconstruction. It was unable to "play anything like its due role of supervision, with the result that during the [war] . . . the military powers of the President underwent undue expansion, and during [Reconstruction] . . . the legislative powers of Congress" similarly enlarged.

Supposedly, then, the Court was an object of suspicion and distrust when it was confronted with the great constitutional crisis and the highly explosive politics of Reconstruction. A band of c Vindictive" men in Congress, frustrated by the loss of prerogatives to the wartime executive, were apparently determined to achieve their own reconstruction program without interference from an obstinate president or from a fussy judiciary insistent upon traditional constitutional limitations and niceties.

According to the traditional accounts, the President nevertheless tried to thwart the congressional will, and so, at first, did the Supreme Court. It interposed its authority against such excesses as the use of military tribunals for civilians and punitive, restrictive legislation against former Confederates. The Court's decisions in the Milligan, Cummings, and Garland cases usually are described as eloquent testimony in behalf of traditional values of American liberty and freedom against violations bred by a wartime environment. But as the nation was not inclined to heed fundamentals, these decisions merely served as grist for the Radical Republican mill. The Radicals bracketed the Court with the rapidly discredited Andrew Johnson and argued that both were seeking to deny the North the full fruits of its triumph. Thaddeus Stevens, in particular, railed against the Milligan decision, asserting that it was "far more dangerous" than even the infamous Dred Scott decision.

Stevens's outcry presumably struck the keynote for a wholesale assault on the Court's institutional functions, its independence, and its membership. Indeed, Professor James G. Randall found that "the annihilation of the Court itself was talked of by Republicans." In July, 1866, the Radicals had already reduced the size of the Court over Johnson's veto, supposedly to prevent the President from making undesirable appointments and to manifest their contempt for the Court.

The tumult in Congress apparently was not without effect in the highest judicial councils. The justices ceased to speak out with the courage, boldness, and forcefulness that had characterized their stands on military tribunals and test oaths. In Mississippi v. Johnson and Georgia v. Stanton, for example, the Court "evaded" and "dodged" opportunities to answer fundamental questions touching on the congressional program of military reconstruction. Although the Reconstruction Acts of 1867 were ' 'palpably unconstitutional under the Milligan doctrine," the Court declined to offer a definitive constitutional ruling. At this point, however, the oft-told story loses its customary unity. Some writers have charged the Court with cowardice: "the judges turned their backs on the brave argument of... Milligan . . . and retreated behind technicalities to keep from handing down a decision." Other writers, recognizing the fearsome power of the Radicals, have said that the Court acted with great "prudence." Still others have approved the Court's self-restraint and denial of jurisdiction on the ground that the problem was "political" and beyond the purview of judicial authority.

Suspicion of judicial intentions supposedly persisted in certain congressional quarters, despite the Court's reticence in the Mississippi and Georgia cases. In late 1867 and early 1868, some Republican congressmen attempted to forestall a judicial veto by requiring a two-thirds or unanimous vote of the Court. Some members even sought to abolish judicial review altogether. When the justices accepted jurisdiction in Ex parte McCardle in February, 1868, and heard arguments on the constitutionality of the Reconstruction Acts, they confirmed the worst fears of the extreme Radicals and alarmed the Republican rank and file. Riding roughshod over Democratic opposition and a presidential veto, Congress withdrew appellate jurisdiction from the Court for cases such as McCardle's. One historian has excoriated this action as an "abominable subterfuge" and "a shameful abuse" of power. Former Justice Benjamin R. Curtis, of Dred Scott fame, wrote that Congress, "with the acquiescence of the country, conquered one President, and subdued the Supreme Court."

Finally, in Texas v. White, the Court adopted the "orthodox view" and again refused to interfere with congressional policy. Chief Justice Salmon P. Chase's opinion in this case has been described as "probably better as politics than as law" and as a "major victory for the Radicals." Texas v. White is often seen as the highwater mark of respectability for the Radical program and the ultimate in judicial compliance and quiescence.