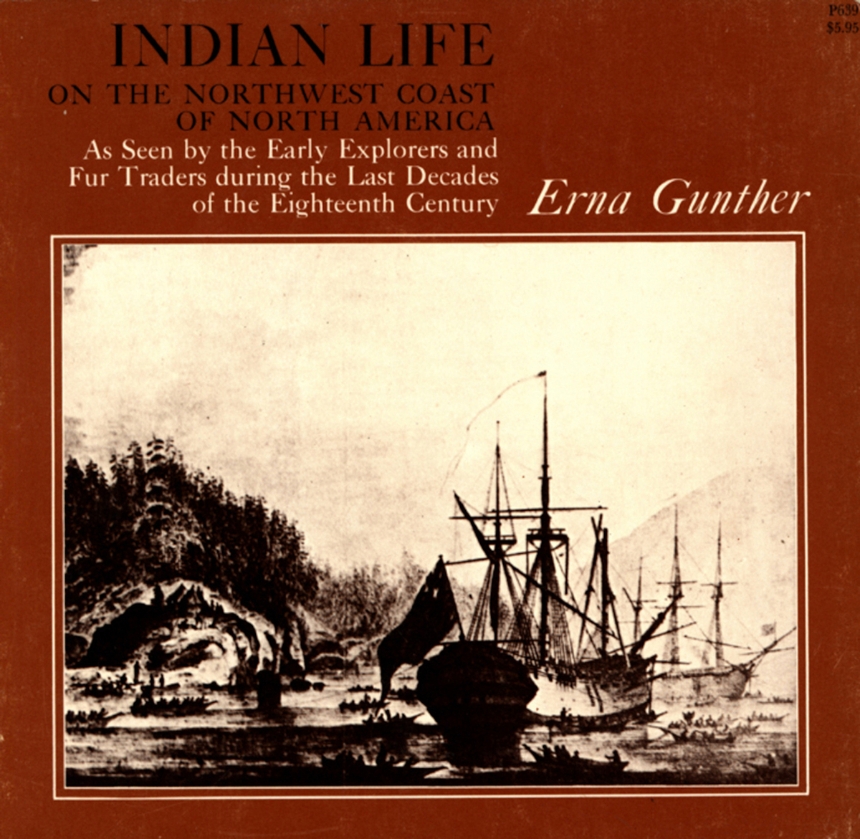 A reconstruction of the Haida and Tlingit cultures of the Pacific Northwest during the late eighteenth and early nineteenth centuries.

Drawing on a wide range of evidence, this volume is a carefully researched investigation into the ethnohistory of the Pacific Northwest during the period of European exploration of the region. The book supplements the archeological evidence from the area with a detailed investigation of the journals, diaries, and sketchbooks of Russian, Spanish, and English explorers and traders who reached the region, as well as artifacts that those explorers and traders obtained on their expeditions and that are now held in museums worldwide. In doing so, Gunther's research extends anthropological study of the region a century earlier, and sheds light on the understudied tribal cultures of the Haida and the Tlingit. The volume contains splendid reproductions of contemporary drawings, and appendices mapping the museum locations of artifacts and describing the processes of native technology.

Chapter 1: The Russians Seek the "Great Land" and Thereby Arouse the Spaniards to Reconsider the Northern Boundary of "Alta California"

In the decade when George Washington was born, the eastward movement of the Russians across Siberia had culminated in efforts to discover what kind of land there might be across the Pacific, whether America and Asia were joined, and where the eternal fogs could be penetrated to reveal the answers to these questions. Russia had tried to compete with the maritime nations of Europe to find a northeast passage along the northern coast of the continent, but the severe Arctic ice and climate proved the enemy of them all. England and Holland gave up the search, but the Russians had another approach to the east. The treasures of India and China were not as important to them as to the other European countries early in the seventeenth century; they were interested in furs. At the Ural Mountains, the eastern boundary of European Russia, salt was being exchanged for furs, and this stimulated the Cossacks from the Black Sea and Caspian Sea to move eastward. The open country was a great delight to them and they found that they did not need large armies to subdue the small kingdoms and nomad camps on the Siberian steppes. By the spring of 1628 the Cossacks had built a fort where the city of Yakutsk later stood as the capital of eastern Siberia.

As they pressed on to the Pacific they became aware of land across the sea—"Bolshaya Zemblya," they called it—with its many offshore islands. Not waiting for official expeditions to be sent out, the impatient fur traders started building ships in Kamchatka. They had only poor materials, and the workmen were unskilled, and so the Pacific storms played havoc with the crude craft and many ships and their crews were lost. At last the government sponsored an expedition to study the Russian coast northward from Kamchatka. Captain Vitus Bering was selected by Peter the Great to command a series of expeditions which proved the separation of America and Asia and gave the first glimpse of the Alaskan shore near Cape Prince of Wales.

Bering was then ordered to mount another expedition which was to approach the American shores from Kamchatka and through the Aleutian Archipelago. For this voyage he had two ships, the Saint Peter and the Saint Paul, the latter commanded by Chirikof. They left Petropavlovsk, Kamchatka, on 4 June 1741. By 20 June they encountered severe storms which separated the ships and led to the tragedy of this undertaking. For two weeks they tried to find each other without success, though they were often not more than thirty miles apart.

On 16 July and 20 July each of the leaders came into independently sight of the mainland of the northwest coast of America. Bering saw Kayak Island on 16 July, and this represented the "official" discovery of northwestern America. From there he saw Mount Saint Elias, and some scholars believe that he named it. It was here that Steller, the naturalist with the expedition, made the first ethnographic study in the region; he and Waxel went ashore and saw a recently deserted dwelling where a meal was being prepared. Steller commented on the likeness between the greens being used and those in Kamchatka. After noting all the utensils in the house, Steller left an iron kettle, some cloth, iron tools, and some beads in return for several native pieces he took with him.

At this time Bering was already too ill to come ashore, even though they had then accomplished one objective of their voyage. They next headed for Kodiak, Trinity Island, and explored for seven days in the Shumagin Islands. By this time Bering's health was so poor that Waxel, second in command of the Saint Peter, took over and started westward, hoping to return to Kamchatka before the winter. They became stranded on Bering's Island with a dying commander and a crew suffering extensively from scurvy. There they stayed until spring, when they built a ship out of the remnants of the Saint Peter and returned to Petropavlovsk

On 20 July, Chirikof, still having made no contact with Bering, came into Sitka Sound and sent a small boat ashore with ten men, well armed, to get water. When they did not come into sight again after landing, he sent another five men to search for them. They also disappeared. It is logical to assume that they were captured by the Indians, but their fate, death or slavery, was never known. Chirikof could not afford to risk any more of his crew to rescue them, and so he stayed around for a few days in the hope that there might be some sign of them. On the first day, when the larger group disappeared, some Indians came to the shore, crying agai, agail, which means "come here." Perhaps they wanted to capture more Russians or lead them to their companions. Some have felt that if they had killed the men they would not have come to the shore and tried to communicate with the ship. Many theories have been proposed, but no clue to their fate has ever been found.

Both these earliest contacts lacked personal relationships, but at least one cannot consider them hostile. The Tlingit's coming to the shore shouting what could be interpreted as a desire to make contact, and the desertion of the dwelling on Kayak Island, can be attributed to the natural fear which a large ship would inspire. Many first contacts between native peoples and Europeans were friendly, and only after some error was committed on either side did the attitude change. It is unfortunate that it was the white man's firearms that broke the charm rather than a shower of arrows.

This was not a very auspicious first contact with the new land, but the reports of plentiful fur-bearing animals, especially the sea otter, stimulated the Russians to greater activity, just as the same news which Cook's ships brought to Macao later started the non-Russian fur trade on the north Pacific coast. Soon the Aleutian Islands had been almost stripped of sea otter, and the Aleut were forced to pay tribute and to hunt sea otter for the Russians. Because of this decline the Russians looked elsewhere for more profitable hunting grounds. The expense of outfitting an expedition large enough to defend itself shut out all but the big firms who through subsidy or otherwise had government support. Larger companies were formed, but they too began a cutthroat competition, and the natives' situation became critical because of ruthless exploitation. Shelikof was the most successful of the great traders in the latter part of the 1770s. As the Russians pressed forward toward the mainland of Alaska, one group of natives acted aggressively enough to delay their movement beyond the Aleutian Islands. These were the Chugach, an Eskimo tribe living in Prince William Sound. Berkh wrote, "The fearless natives of Chugatsk who had, by their raids, spread terror among all the surrounding tribes, and especially among the inhabitants of Kodiak, were not frightened by Russian guns . . . they blocked their way to the hunting ground, trading posts and to subsistence" (Berkh 1823, p. 85).

This was the situation when the Spaniards and, later, Cook came into the area from 1774 to 1778. Cook was under orders to go north as far as possible, not exploring any area closely, but still to watch for inlets that might lead to a Northwest Passage.

The Spaniards, who were comfortably settled in Mexico and southern California, did not concern themselves about the northern boundary of their claim in North America, which was vaguely called "Alta California," until rumors were circulated that the Russians were exploring Alaska. The Conde de Lacey, Spanish minister to Russia, obtained a printed Russian map which he sent to Mexico in 1773 with orders from Madrid to organize an expedition to investigate its validity (Wagner 1937, p. 172). In 1774, Juan Josef Perez Hernandez, a seasoned navigator from Mallorca, was ordered to sail to 60° north latitude and dislodge any Russians he found on the coast. Then he was to follow the coast south, making no settlements but taking possession in the name of the king, erecting a cross and burying bottles with documents.

For this voyage Perez sailed in the Santiago from Monterey, California, on 11 June 1774, and returned on 27 September of the same year. He did not reach 60° north latitude as ordered, but he did make the first known contact with the Haida at Langara (North) Island off the northwest coast of Graham Island in the Queen Charlotte Islands. Here he met the people who occupied the archipelago, which consists of two large islands and smaller groups of offshore islands, some of which are no more than bird-inhabited rocks. Langara, or North Island, as Dixon called it a few years later, was occupied during at least some seasons of the year. The Haida live in a series of villages or towns, speak closely related dialects of the same language, and are one of the three distinguished northern groups of the Northwest Coast.