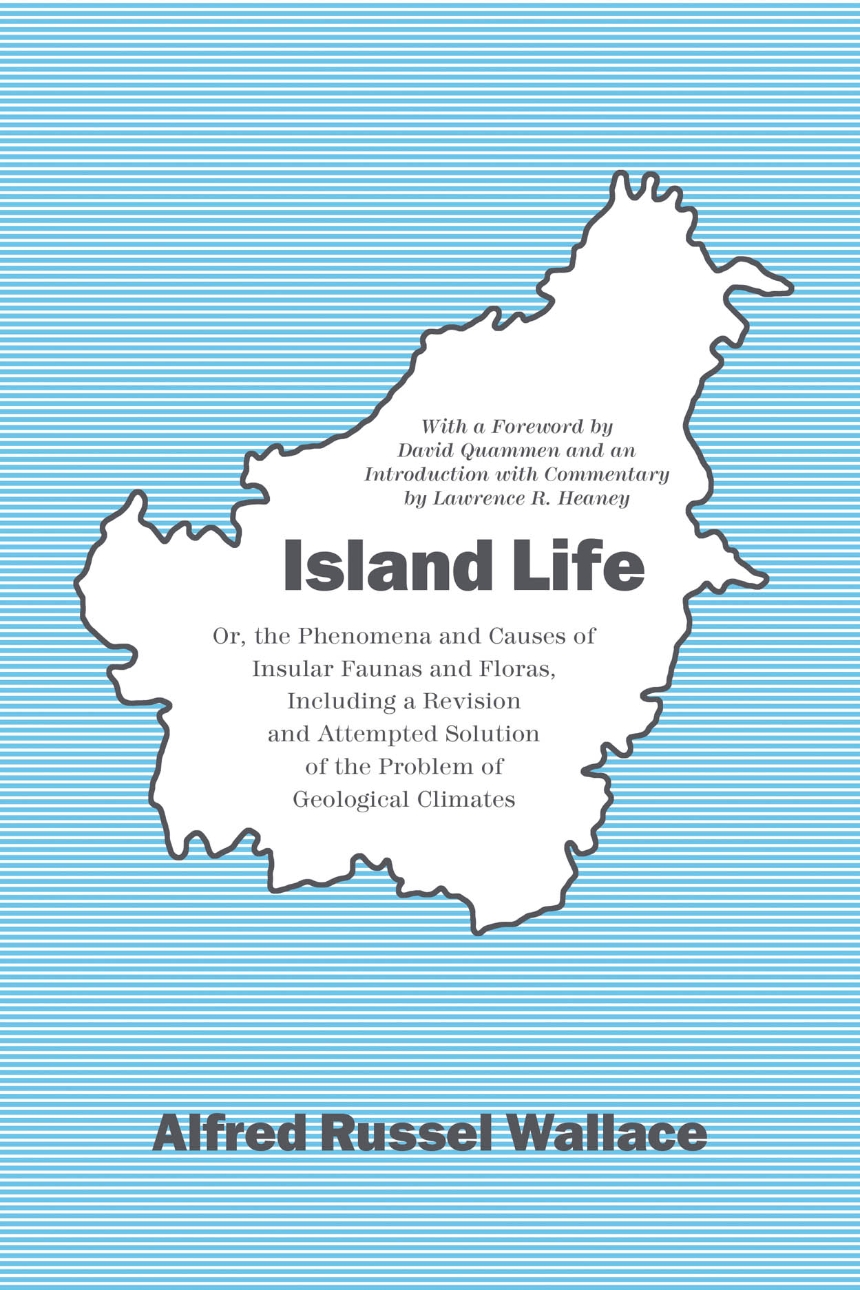 Or, the Phenomena and Causes of Insular Faunas and Floras, Including a Revision and Attempted Solution of the Problem of Geological Climates

Or, the Phenomena and Causes of Insular Faunas and Floras, Including a Revision and Attempted Solution of the Problem of Geological Climates

With a Foreword by David Quammen and an Introduction by Lawrence R. Heaney
Alfred Russel Wallace is best known as the codiscoverer, with Charles Darwin, of natural selection, but he was also history’s foremost tropical naturalist and the father of biogeography, the modern study of the geographical basis of biological diversity. Island Life has long been considered one of his most important works. In it he extends studies on the influence of the glacial epochs on organismal distribution patterns and the characteristics of island biogeography, a topic as vibrant and actively studied today as it was in 1880. The book includes history’s first theory of continental glaciation based on a combination of geographical and astronomical causes, a discussion of island classification, and a survey of worldwide island faunas and floras.
The year 2013 will mark the centennial of Wallace’s death and will see a host of symposia and reflections on Wallace’s contributions to evolution and natural history. This reissue of the first edition of Island Life, with a foreword by David Quammen and an extensive commentary by Lawrence R. Heaney, who has spent over three decades studying island biogeography in Southeast Asia, makes this essential and foundational reference available and accessible once again.

“Island Life is a classic work that focuses specifically on island biogeography, and it represents one of Wallace’s most important contributions. Fortunately, the first edition (1880) has been reissued to commemorate the centennial of Wallace’s death. This new version begins with a brief foreword by author David Quammen and a thorough sixty-page introduction by Lawrence Heaney, one of the foremost modern scholars on island biogeography, especially for Southeast Asia.  Heaney’s detailed commentary is a wonderful addition that updates the original book. . . . Highly recommended.”

“Island Life remains a good read, even after more than a hundred years. It offers an insight into the development of logical thought and the evolution of ideas based on observable evidence. This reprint, with its insightful commentaries, is a reminder of what constitutes a publishing classis and a milestone in biological understanding.”

“The value in reprinting this book rests not only in making it more easily accessible to modern readers, but also in its outstanding introduction and commentary by island biogeographer Lawrence R. Heany. . . . Just like Darwin’s Origin of Species, the structure of Island Life has a powerful logic. For each chapter, Wallace marshals impressive evidence from a variety of disciplines. . . . Wallace has much to say that is still worth reading today.”

Sherrie Lyons | Reports of the National Center for Science Education

“This new edition features an interesting foreword by David Quammen on the circumstances of Wallace’s life and work: in spite of Wallace’s collaboration with Charles Darwin, the explorer we regard as the father of biogeography was often held at arms’ length by the scientific in-crowd due to his quirky nonscientific interests. That changed with the publication of Island Life, which firmly reestablished Wallace’s scientific credibility as one of the preeminent scholars of his time. This edition also features a detailed commentary by Lawrence Heaney. . . . Heaney effectively moves Wallace out of Darwin’s shadow, without lessening the achievements of either man, by arguing convincingly that Wallace’s scientific contribution—and perhaps his most important contribution—extends well beyond the codiscovery of natural selection. . . . An essential read for anyone interested in the complex distribution of life on Earth.”

Katharine A. Marske, University of Copenhagen | Quarterly Review of Biology

PART I.
THE DISPERSAL OF ORGANISMS; ITS PHENOMENA, LAWS, AND CAUSES.

Remarkable Contrasts in the distribution of Animals—Britain and Japan—Australia and New Zealand—Bali and Lombok—Florida and Bahama Islands—Brazil and Africa—Borneo, Madagascar, and Celebes—Problems in Distribution to be found in every country—Can be solved only by the combination of many distinct lines of inquiry, biological and physical—Islands offer the best subjects for the study of distribution—Outline of the subjects to be discussed in the present volume

CHAPTER III.
CLASSIFICATION OF THE FACTS OF DISTRIBUTION.—ZOOLOGICAL REGIONS.

CHAPTER IV.
EVOLUTION AS THE KEY TO DISTRIBUTION.

Importance of the Doctrine of Evolution—The Origin of New Species—Variation in Animals—The amount of variation in North American Birds—How new species arise from a variable species—Definition and Origin of Genera—Cause of the extinction of Species—The rise and decay of Species and Genera—Discontinuous specific areas, why rare—Discontinuity of the area of Parus palustris—Discontinuity of Emberiza schoeniclus—The European and Japanese Jays—Supposed examples of discontinuity among North American Birds—Distribution and antiquity of Families—Discontinuity a proof of antiquity—Concluding Remarks

CHAPTER V.
THE POWERS OF DISPERSAL OF ANIMALS AND PLANTS.

CHAPTER VI.
GEOGRAPHICAL AND GEOLOGICAL CHANGES: THE PERMANENCE OF CONTINENTS.

CHAPTER VII.
CHANGES OF CLIMATE WHICH HAVE INFLUENCED THE DISPERSAL OF ORGANISMS: THE GLACIAL EPOCH.

Proofs of the recent occurrence of a Glacial Epoch—Moraines—Travelled Blocks—Glacial deposits of Scotland: the “Till”—Inferences from the glacial phenomena of Scotland—Glacial phenomena of North America—Effects of the Glacial Epoch on animal life—Warm and cold periods—Palæontological evidence of alternate cold and warm periods—Evidence of interglacial warm periods on the Continent and in North America—Migrations and extinctions of Organisms caused by the Glacial Epoch

Various suggested causes—Astronomical causes of changes of Climate—Difference of Temperature caused by varying distances of the Sun—Properties of air and water, snow and ice, in relation to Climate—Effects of snow on Climate—High land and great moisture essential to the initiation of a Glacial Epoch—Perpetual snow nowhere exists on lowlands—Conditions determining the presence or absence of perpetual Snow—Efficiency of Astronomical causes in producing Glaciation—Action of meteorological causes in intensifying Glaciation—Summary of causes of Glaciation—Effect of clouds and fog in cutting off the Sun’s heat—South Temperate America as illustrating the influence of Astronomical causes on Climate—Geographical changes how far a cause of Glaciation—Land acting as a barrier to ocean-currents—The Theory of interglacial periods and their probable character—Probable effect of winter in aphelion on the climate of Britain—The essential principle of climatal change restated—Probable date of the last Glacial Epoch—Changes of the sea-level dependent on Glaciation—The planet Mars as bearing on the theory of excentricity as a cause of Glacial Epochs

Mr. Croll’s views on ancient Glacial Epochs—Effects of Denudation in destroying the evidence of remote Glacial Epochs—Rise of sea-level connected with Glacial Epochs a cause of further denudation—What evidence of early Glacial Epochs may be expected—Evidences of Ice-action during the Tertiary Period—The weight of the negative evidence—Temperate climates in the Arctic Regions—The Miocene Arctic flora—Mild Arctic climates of the Cretaceous Period—Stratigraphical evidence of long-continued mild arctic conditions—The causes of mild Arctic climates—Geographical conditions favouring mild northern climates in Tertiary times—The Indian Ocean as a source of heat in Tertiary times—Condition of North America during the Tertiary Period—Effect of high excentricity on warm Polar climates—Evidences as to climate in the Secondary and Palæozoic Epochs—Warm Arctic climates in early Secondary and Palæozoic times—Conclusions as to the climates of Secondary and Tertiary Periods—General view of Geological Climates as dependent on the physical features of the Earth’s surface—Estimate of the comparative effects of geographical and physical causes in producing changes of climate

CHAPTER X.
THE EARTH’S AGE, AND THE RATE OF DEVELOPMENT OF ANIMALS AND PLANTS.

CHAPTER XI.
THE CLASSIFICATION OF ISLANDS.

THE AZORES, OR WESTERN ISLANDS.

Position and physical features of Borneo—Zoological features of Borneo: Mammalia—Birds—The affinities of the Borneo fauna—Java, its position and physical features—General character of the fauna of Java—Differences between the fauna of Java and that of the other Malay Islands—Special relations of the Javan fauna to that of the Asiatic continent—Past geographical changes of Java and Borneo—The Philippine Islands—Concluding Remarks on the Malay Islands

Japan, its position and Physical features—Zoological features of Japan—Mammalia—Birds—Birds common to Great Britain and Japan—Birds peculiar to Japan—Japan Birds recurring in distant areas—Formosa—Physical features of Formosa—Animal life of Formosa—Mammalia—Land birds peculiar to Formosa—Formosan birds recurring in India or Malaya—Comparison of faunas of Hainan, Formosa, and Japan—General Remarks on Recent Continental Islands

CHAPTER XXII.
THE FLORA OF NEW ZEALAND: ITS AFFINITIES AND PROBABLE ORIGIN.

CHAPTER XXIII.
ON THE ARCTIC ELEMENT IN SOUTH TEMPERATE FLORAS.

The present volume is the development and application of a theory—Statement of the Biological and Physical causes of dispersal—Investigation of the facts of dispersal—of the means of dispersal—of geographical changes affecting dispersal—of climatal changes affecting dispersal—The Glacial Epoch and its causes—Alleged ancient glacial epochs—Warm polar climates and their causes—Conclusions as to geological climates—How far different from those of Mr. Croll—Supposed limitations of geological time—Time amply sufficient both for geological and biological development—Insular faunas and floras—The North Atlantic Islands—The Galapagos—St. Helena and the Sandwich Islands—Great Britain as a recent Continental Island—Borneo and Java—Japan and Formosa—Madagascar as an ancient Continental Island—Celebes and New Zealand as anomalous Islands—The Flora of New Zealand and its origin—The European element in the South Temperate Floras—Concluding Remarks