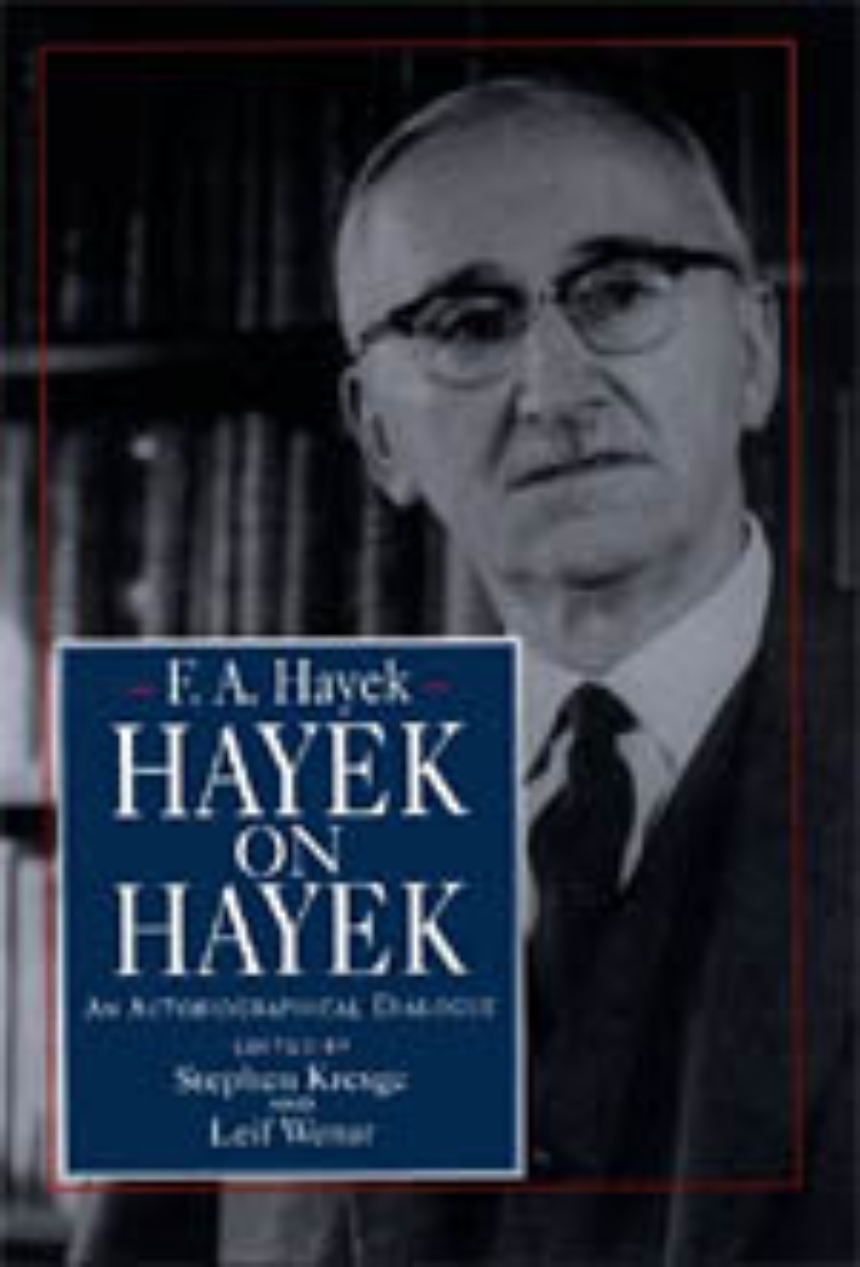 Edited by Stephen Kresge and Leif Wenar
The crumbling of the Berlin Wall, the fall of the iron curtain, and the Reagan and Thatcher "revolutions" all owe a tremendous debt to F. A. Hayek. Economist, social and political theorist, and intellectual historian, Hayek passionately championed individual liberty and condemned the dangers of state control. Now Hayek at last tells the story of his long and controversial career, during which his fortunes rose, fell, and finally rose again.

Through a complete collection of previously unpublished autobiographical sketches and a wide selection of interviews, Hayek on Hayek provides the first detailed chronology of Hayek’s early life and education, his intellectual progress, and the academic and public reception of his ideas. His discussions range from economic methodology and the question of religious faith to the atmosphere of post-World War I Vienna and the British character.

Born in 1899 into a Viennese family of academics and civil servants, Hayek was educated at the University of Vienna, fought in the Great War, and later moved to London, where, as he watched liberty vanish under fascism and communism across Europe, he wrote The Road to Serfdom. Although this book attracted great public attention, Hayek was ignored by other economists for thirty years after World War II, when European social democracies boomed and Keynesianism became the dominant intellectual force. However, the award of the Nobel Prize in economics for 1974 signaled a reversal in Hayek’s fortunes, and before his death in 1992 he saw his life’s work vindicated in the collapse of the planned economies of Eastern Europe.

Hayek on Hayek is as close to an autobiography of Hayek as we will ever have. In his own eloquent words, Hayek reveals the remarkable life of a revolutionary thinker in revolutionary times.

"One of the great thinkers of our age who explored the promise and contours of liberty....[Hayek] revolutionized the world’s intellectual and political life"—President George Bush, on awarding F. A. Hayek the Medal of Freedom

F. A. Hayek, recipient of the Medal of Freedom 1991 and the Nobel Memorial Prize in Economics in 1974, was a pioneer in monetary theory and the principal proponent of the libertarian philosophy. Hayek is the author of numerous books in economics, as well as books in political philosophy and psychology.

Editorial Foreword
Introduction
1. Vienna-New York-Vienna
2. London
3. A Parting in the Road
4. Chicago-Freiburg
Publications and Letters Mentioned in Text
Index of Persons and Places