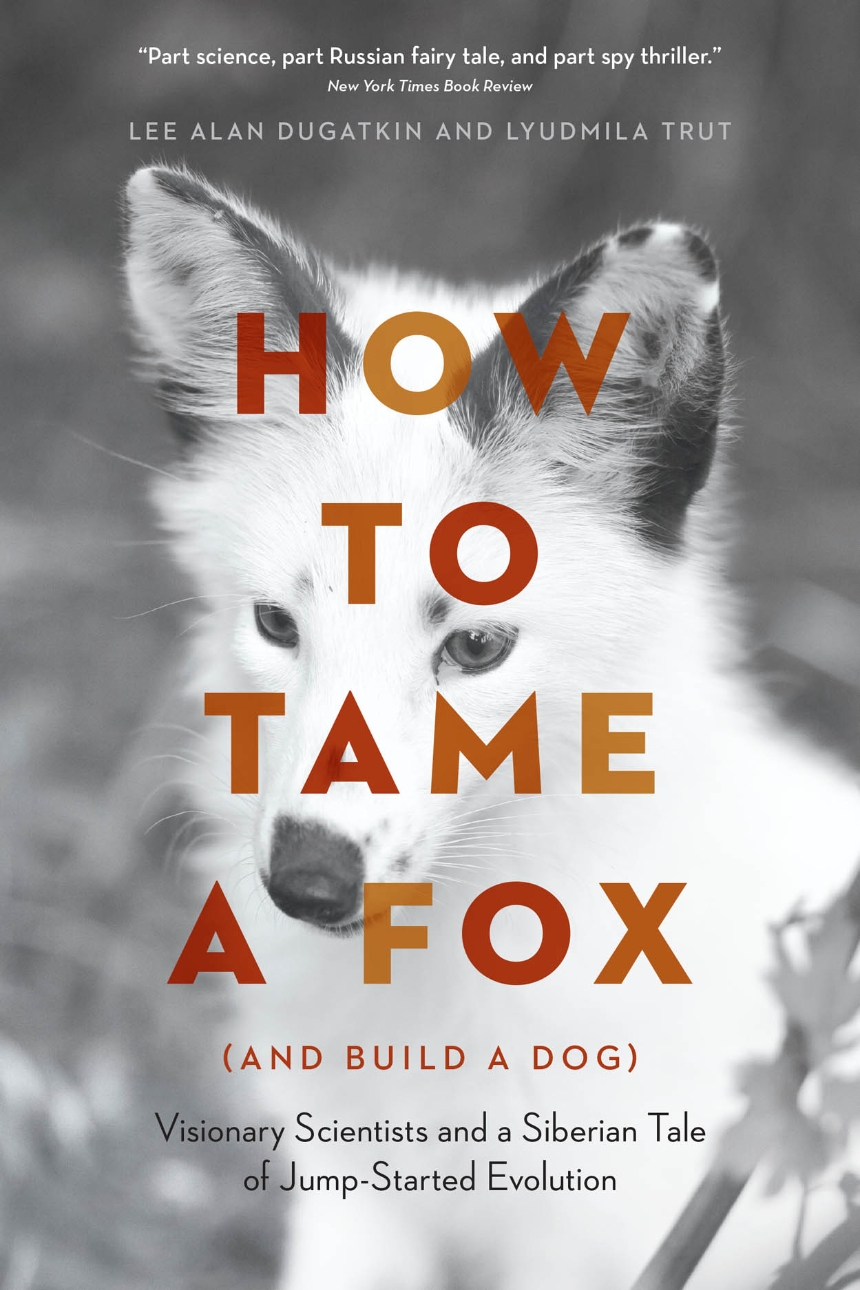 How to Tame a Fox (and Build a Dog)

Visionary Scientists and a Siberian Tale of Jump-Started Evolution

How to Tame a Fox (and Build a Dog)

Visionary Scientists and a Siberian Tale of Jump-Started Evolution

Tucked away in Siberia, there are furry, four-legged creatures with wagging tails and floppy ears that are as docile and friendly as any lapdog. But, despite appearances, these are not dogs—they are foxes. They are the result of the most astonishing experiment in breeding ever undertaken—imagine speeding up thousands of years of evolution into a few decades. In 1959, biologists Dmitri Belyaev and Lyudmila Trut set out to do just that, by starting with a few dozen silver foxes from fox farms in the USSR and attempting to recreate the evolution of wolves into dogs in real time in order to witness the process of domestication. This is the extraordinary, untold story of this remarkable undertaking.

Most accounts of the natural evolution of wolves place it over a span of about 15,000 years, but within a decade, Belyaev and Trut’s fox breeding experiments had resulted in puppy-like foxes with floppy ears, piebald spots, and curly tails. Along with these physical changes came genetic and behavioral changes, as well. The foxes were bred using selection criteria for tameness, and with each generation, they became increasingly interested in human companionship. Trut has been there the whole time, and has been the lead scientist on this work since Belyaev’s death in 1985, and with Lee Dugatkin, biologist and science writer, she tells the story of the adventure, science, politics, and love behind it all.  In How to Tame a Fox, Dugatkin and Trut take us inside this path-breaking experiment in the midst of the brutal winters of Siberia to reveal how scientific history is made and continues to be made today.

To date, fifty-six generations of foxes have been domesticated, and we continue to learn significant lessons from them about the genetic and behavioral evolution of domesticated animals. How to Tame a Fox offers an incredible tale of scientists at work, while also celebrating the deep attachments that have brought humans and animals together throughout time.

"Dugatkin is a veteran science writer with a knack for turning sprawling subjects into compact, enjoyable narratives. Trut, now in her 80s, is both a coauthor and a subject of the book, an unusual arrangement. But her intense participation adds a rare degree of intimacy to this science story."

“Profound insights into how dogs evolved from wolves come from a remarkable, multidecade experiment on foxes that was carried out under the supervision of the Russian geneticist Dmitri Belyaev from the 1950s onward. Because much of the research was published in Russian, How to Tame a Fox, which is cowritten by Trut—a central figure in the project over many decades—will be widely welcomed for the extraordinary detail it contains.”

"It is an extraordinary story, and How to Tame a Fox tells it well. . . . By the end of the book, the thesis that wolves may have been no less complicit in the process of their domestication than humans has come to seem entirely probable."

"If you read only two biology books this year, this is one of those two that you simply must read."

"Written for a general audience, it chronicles the story of a scientific gambit that was more successful that even its creators had dreamed. It's an inspiring reminder of how much we still don't know about the world, and how much can be learned by taking bold chances. It's also a cautionary tale about the risks of state-funded science that has nearly as much relevance to Trump's United States, where federal research budgets are in danger of being slashed right and left, as it does to Stalin’s Russia."

"Our furry companions evidently descended from wild wolves—resulting from thousands of years of human selection. Nearly sixty years ago Russian researchers Trut and Dmitri Belyaev decided to domesticate wild foxes to learn in detail how the journey from wild beast to household pet happens. They set up their experiment on a farm in Siberia and over the following decades mated the tamest animals from each successive generation. In this book, biologist and science writer Dugatkin and Trut recount this grand experiment. The result: a host of docile foxes and the identification of the genetic underpinnings for their domestication.”

"Trut and Dugatkin lovingly recount some of the experiment's milestones, including the first fox born with a wagging tail and the first one with droopy ears. . . . At every step, the authors skillfully weave the science of domestication into the narrative of foxes becoming ever-more doglike."

"Do you like charming memoirs about people’s relationships with endearing animals? Do you like expansive, dramatic accounts of evolution in action? Do you like hard-nosed, laboratory-based studies of animal development? Then you’ll love this book, which contrives to combine all three approaches in its account of some groundbreaking studies in animal domestication, begun in the Soviet Union by coauthor Trut and her boss Dmitri Belyaev in 1959. . . . Trut, in collaboration with Dugatkin, a US evolutionary biologist, captures both the charm of her life’s work and the brutality of all those Siberian winters in a book full of delights both intellectual and human."

"A cheerful, easy-to-read account that expounds upon the wonders of scientific achievement. . . . The authors weave other charming histories of other scientific studies and events throughout the book, including the discovery of hormones, pedigree analysis, animal communication, human evolution, and Belyaev's travels in international scientific circles. Writing a simple, straightforward narrative suitable for lay readers, Dugatkin and Trut spin complex genetic science into a fascinating story about adorable foxes."

“Can new kinds of animals be brought into being outside of DNA tinkering and Frankensteining? Most certainly, as a long-running Russian experiment reveals. . . . The science is profound, but the authors write accessibly and engagingly—and their vulpine subjects are awfully cute, too. Of compelling interest to any animal lover and especially to devotees of canids of all kinds.”

"This intriguing, well-written account of an ongoing experiment in canid domestication should delight readers interested in the origins of the human-animal bond."

“How to Tame a Fox (and Build a Dog) is for the scientist, the historian, and the mystery lover in us all. Understanding domestication reveals much about our own humanness, and the story illustrates many versions of humanity, too.”

"Intelligent, accessible, and engaging. It’s a story of courage as well as genius, and a reminder of the enormous value of a scientific curiosity."

“A delightful history. . . . Recounts the story of the experiments in a very readable and non-technical way, while relating the work to genetics, ethology, evolutionary biology, and the spotty history of Soviet science in the mid-twentieth century. A photo section of the domesticated foxes is guaranteed to touch even the most serious reader. Recommended. All readers.”

"Celebrates his [Belyaev’s] original insights, his tenacity, and the amazing leadership and hard work by Trut and her dedicated team. . . . Written in a highly accessible style, it is appropriate for both scientists and nonscientists."

"Written in an accessible style, How to Tame a Fox provides a general reader with an engaging summary of the fox experiments and the people who carried them out. . . . It would make a good book to assign to undergraduate studying the social dimensions of science."

Studies in History and Philosophy of Biological and Biomedical Sciences

"I have always felt that scientists err in speaking only about the products of our research and fail to communicate and discuss the process by which we create those products. We quite deliberately bury under the carpet the sources of our hypotheses, the reasons for our choice of problems to investigate, the circumstances and constraints under which we conduct our work and the biases that inevitably creep into our interpretations. Sadly, the scientific literature is sanitized to remove all traces of the human, social, and political milieu in which we practice our craft. This creates an opaque wall between science and society, leading to avoidable misunderstanding and mistrust. How to Tame a Fox is the perfect antidote to this lament. It lays bare all the social and societal influences that relentlessly work during the course of scientific research. And yet, contrary to what many scientists fear, there is not a blemish on the rigor and precision with which the science is described."

Proceedings of the Indiana Academy of Science

“In the first book on the famous ‘Siberian fox study,’ this extraordinary chronicle recounts one of the world’s most important animal studies. It has not only provided stunning insights into how domestication works and how fast it can happen. It also helps us understand the origins of our deepest non-human bonds—our friendships with our dogs—and where and how they came into being.”

Carl Safina, author of "Beyond Words: What Animals Think and Feel"

“Over the course of decades, Russian scientists transformed wild foxes into friendly pets. They used no science-fiction genetic engineering. They simply guided evolution. This landmark experiment tells us some profound things about domestication, behavior, and ourselves. Finally, someone has written a book-length account of the experience—and a fascinating one at that.”

Carl Zimmer, author of "Evolution: The Triumph of an Idea"

“Dugatkin and Trut have collaborated to produce a well-written and engaging account of one the most influential biological studies ever: the fox farm experiment. Over sixty years ago, a Russian geneticist dared to start an experiment to see if foxes could be domesticated and what variables contributed to the changes domestication brought. The courage involved in starting such an experiment in the USSR of the 1950s was remarkable; the dedication and curiosity that have kept it going ever since have led to stunning new insights on the mechanisms of domestication. Every biologist should read this book!”

Pat Shipman, author of "The Invaders: How Humans and Their Dogs Drove Neanderthals to Extinction"

“An excellent book. The writing is clear and makes for fascinating popular science. This book will attract a wide audience, and I know of none other with such a dramatic combination of good science and social history.”

Aubrey Manning, coauthor of "An Introduction to Animal Behaviour"

Prologue: Why Can’t a Fox Be More like a Dog?
1: A Bold Idea
2: Fire-Breathing Dragons No More
3: Ember’s Tail
4: Dream
5: Happy Family
6: Delicate Interactions
7: The Word and Its Meaning
8: An SOS
9: Clever as a Fox
10: The Commotion in the Genes
Acknowledgments
Notes
Index
Back to top

British Society for the History of Science: Hughes Prize
Shortlist