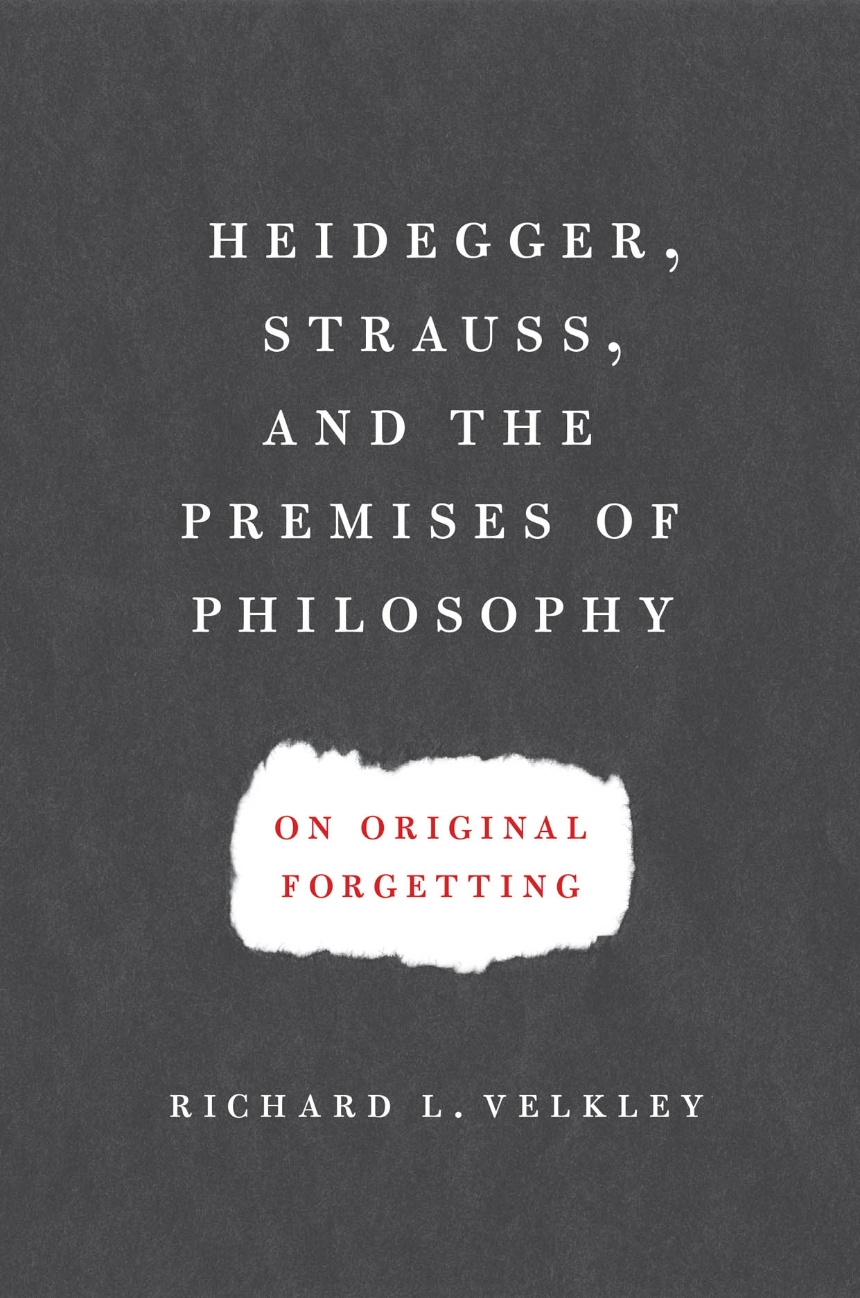 Heidegger, Strauss, and the Premises of Philosophy

Heidegger, Strauss, and the Premises of Philosophy

In this groundbreaking work, Richard L. Velkley examines the complex philosophical relationship between Martin Heidegger and Leo Strauss. Velkley argues that both thinkers provide searching analyses of the philosophical tradition’s origins in radical questioning. For Heidegger and Strauss, the recovery of the original premises of philosophy cannot be separated from rethinking the very possibility of genuine philosophizing.
Common views of the influence of Heidegger’s thought on Strauss suggest that, after being inspired early on by Heidegger’s dismantling of the philosophical tradition, Strauss took a wholly separate path, spurning modernity and pursuing instead a renewal of Socratic political philosophy. Velkley rejects this reading and maintains that Strauss’s engagement with the challenges posed by Heidegger—as well as by modern philosophy in general—formed a crucial and enduring framework for his lifelong philosophical project. More than an intellectual biography or a mere charting of influence, Heidegger, Strauss, and the Premises of Philosophy is a profound consideration of these two philosophers’ reflections on the roots, meaning, and fate of Western rationalism.

“In brilliant fashion Velkley lays out a reading of Heidegger and Strauss that acknowledges the centrality of this neglected conversation to contemporary political thinking. Moreover, he makes a case for attending to the dynamics of this conversation as a radical questioning concerning the origins of the human situation within the ‘cave’ of political life. Yet Velkley also understands that this questioning is inseparable from our openness to the enigmatic whole of our ontological situation that goes beyond politics. Heidegger, Strauss, and the Premises of Philosophy offers a fresh, bold approach to timely philosophical questions and does so with equanimity and grace.”

“I have found Richard Velkley’s book to be a fascinating and informative entrée into the topic of the political, as viewed from a philosophical perspective. Velkley’s book shines a critical spotlight on Martin Heidegger’s thinking about the political, by bringing to the foreground a specific vision of politics developed by a contemporary who was both influenced by Heidegger and yet ultimately diverged from him, Leo Strauss. In this regard, Velkley’s hook provides a major contribution to the ongoing conversation on this topic which, regrettably, often bogs down into various polemics.”

“In this clearly written and compelling study, Velkley not only concisely clarifies Leo Strauss’s philosophical relation to Heidegger, but also enacts the critical philosophy that Strauss sought to revive. In elucidating Strauss’s conception of the aporia of ancient philosophy, Velkley offers a graceful and nuanced account of Strauss’s skeptical attempt to overcome historicism and to do justice to the particularity of the philosopher’s quest for the universal. As such, this is an important book for anyone interested in the scope and meaning of modern philosophy.”

“In Heidegger, Strauss, and the Premises of Philosophy, Velkley analyzes the crisis of Western philosophical traditions in the twentieth century and the different ways in which, in their epoch-making works, Heidegger and Strauss grappled with it. In this penetrating study, Velkley offers an original perspective on both Heidegger’s critique of tradition and Strauss’s assessment of that critique. He examines Heidegger’s aim to renew the fundamental question of Being and, in light of its ancient Greek origins, to wrest it from the grip of later intellectual traditions, and he reevaluates the widely held opinion that Strauss’s concern for political philosophy entailed a turn away from such metaphysical questions. Heidegger, Strauss, and the Premises of Philosophy provides profound insight into two seminal thinkers as well as the problematic relation between philosophy and political thought in our contemporary world.”

“Velkley has succeeded in writing a remarkable study about the intellectual impact of one of the master thinkers of the twentieth century.”

“This is a book that all serious students of Strauss will have to consider.”


Part 1 Repetition of Antiquity at the Peak of Modernity

1 Primal Truth, Errant Tradition, and Crisis:
The Pre-Socratics in Late Modernity
2 “The Unradicality of Modern Philosophy”:
Thinking in Correspondence
3 On Caves and Histories: Strauss’s Post-Nietzschean Socratism

Part 2 Exigencies of Freedom and Politics

4 Freedom from the Good: Heidegger’s Idealist Grounding of Politics
5 Heidegger on Nietzsche and the Higher Freedom
6 The Room for Political Philosophy:
Strauss on Heidegger’s Political Thought

7 On the Roots of Rationalism:
Strauss’s Natural Right and History as Response to Heidegger
8 Is Modernity an Unnatural Construct?
9 Strauss on Individuality and Poetry