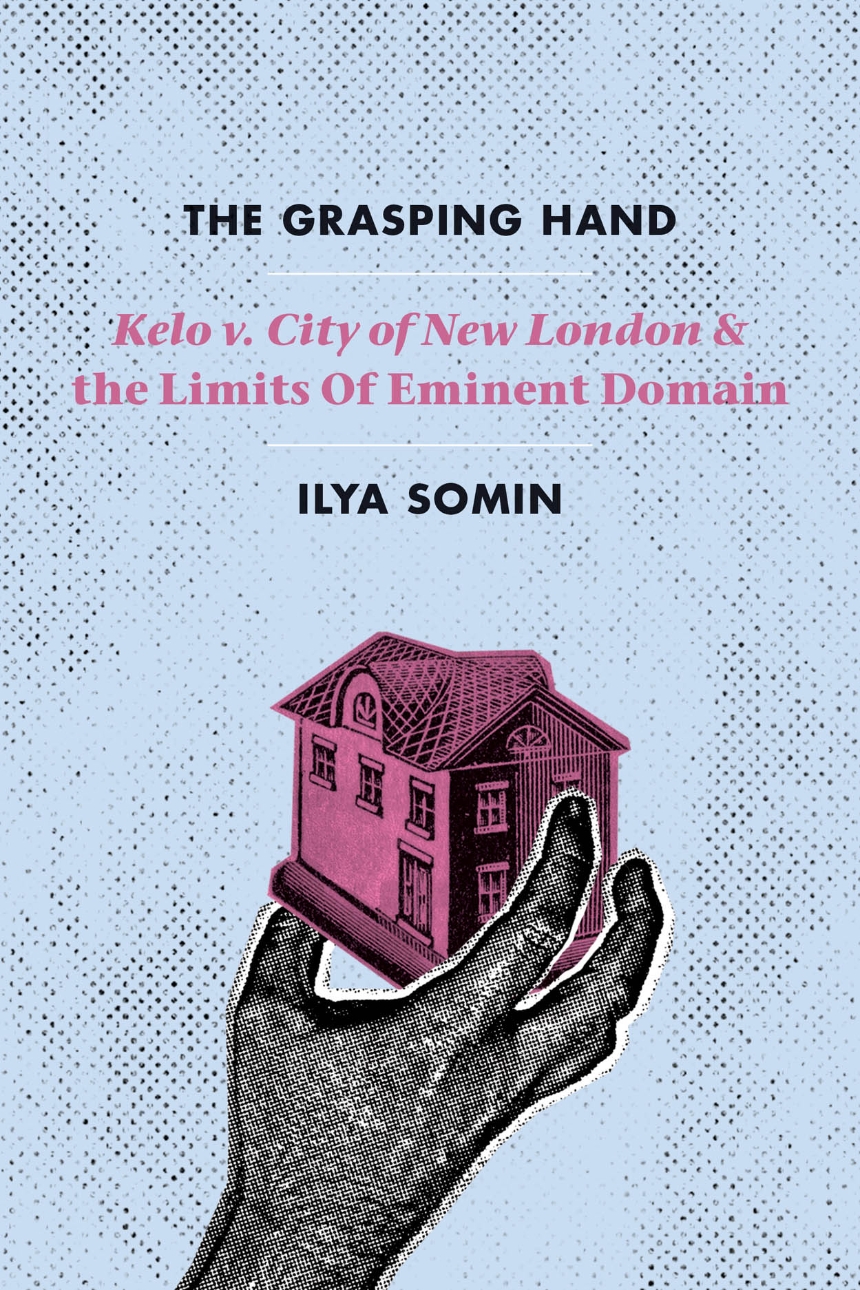 With a New Preface by the Author
In 2005, the Supreme Court ruled that the city of New London, Connecticut, could condemn fifteen residential properties in order to transfer them to a new private owner. Although the Fifth Amendment only permits the taking of private property for “public use,” the Court ruled that the transfer of condemned land to private parties for “economic development” is permitted by the Constitution—even if the government cannot prove that the expected development will ever actually happen. The Court’s decision in Kelo v. City of New London empowered the grasping hand of the state at the expense of the invisible hand of the market.

In this detailed study of one of the most controversial Supreme Court cases in modern times, Ilya Somin argues that Kelo was a grave error. Economic development and “blight” condemnations are unconstitutional under both originalist and most “living constitution” theories of legal interpretation. They also victimize the poor and the politically weak for the benefit of powerful interest groups and often destroy more economic value than they create. Kelo itself exemplifies these patterns. The residents targeted for condemnation lacked the influence needed to combat the formidable government and corporate interests arrayed against them.  Moreover, the city’s poorly conceived development plan ultimately failed: the condemned land lies empty to this day, occupied only by feral cats. The Supreme Court’s unpopular ruling triggered an unprecedented political reaction, with forty-five states passing new laws intended to limit the use of eminent domain. But many of the new laws impose few or no genuine constraints on takings. The Kelo backlash led to significant progress, but not nearly as much as it may have seemed.

Despite its outcome, the closely divided 5-4 ruling shattered what many believed to be a consensus that virtually any condemnation qualifies as a public use under the Fifth Amendment. It also showed that there is widespread public opposition to eminent domain abuse. With controversy over takings sure to continue, The Grasping Hand offers the first book-length analysis of Kelo by a legal scholar, alongside a broader history of the dispute over public use and eminent domain and an evaluation of options for reform.

"Somin’s thorough rebuttal of the constitutional reasoning and philosophical implications of the Supreme Court’s Kelo decision demonstrates why that ruling was a constructive disaster: It was so dreadful it has provoked robust defenses of the role of private property in sustaining Americans’ liberty."

“The Grasping Hand is likely to be the definitive analysis of the Supreme Court’s controversial decision in the Kelo case. But Somin attends to much more than that. He sets out the political and doctrinal history that led up to Kelo and critiques the legislative and judicial developments provoked by the reaction to it. Somin has long been a champion of strong property rights. What he has to say will be of value to those who share that commitment and perhaps even more to those who don’t.”

"By dint of his uncommon thoroughness, Somin has become the leading and most persuasive critic of the Supreme Court’s ill-fated Kelo decision. His close examination of the case’s factual backdrop offers chilling confirmation of his central thesis: weak constitutional protection of property rights opens the door to political intrigue that exacts its greatest toll on the poor and vulnerable in society. Somin’s gripping account confirms your worst fears about big government."

“Somin is one of the world’s leading scholars on private property rights, and his analysis of the history of eminent domain and the Kelo decision is extremely thorough and insightful. But The Grasping Hand has something more than just solid legal history and reasoning. With its interviews with property owners and explorations of how eminent domain plays out in the real world, the book, unlike virtually all other scholarly works on eminent domain, compellingly communicates the human dimension and costs of governments teaming up with private interests to take the homes, small businesses, and other property of Americans.”

Dana Berliner and Scott Bullock, co-counsel for the homeowners in Kelo v. City of New London

"For anyone interested in the Kelo case, I recommend Somin’s book. It is the first book-length discussion of the Kelo appellate proceedings by a legal scholar. It is also by far the most exhaustively researched history of the public use doctrine in the state and federal courts before and since Kelo. While I do not share Somin's opposition to the Kelo decision, I welcome his good scholarship on the subject.”

"In this carefully researched and convincingly argued volume, Somin provides a powerful critique of the Supreme Court’s 'public use' jurisprudence and the controversial Kelo decision. He also gives careful attention to the hostile public reaction to the ruling and points out that much of the post-Kelo reform legislation is inadequate to prevent future eminent domain abuse. This insightful book belongs on the shelf of anyone interested in the place of property rights in constitutional law."

James W. Ely, Jr., author of The Guardian of Every Other Right: A Constitutional History of Property Rights

“The definitive treatment of eminent domain and the Kelo case. As you might expect, Somin discusses the legal issues with aplomb [and] offers . . . an eye-opening investigation of the history behind many of the major cases.”

"[A] key contribution to the literature on property rights. I dare say that this is the most important book on eminent domain since Epstein’s classic, Takings. . . . [Somin's] voice is the voice of reason, precisely the kind of scholarship that is sorely needed in our polarized society. And this book is, today, the leading authority on Kelo."

“Sharp legal, economic, and historical analysis of the eminent domain debate. . . . The Grasping Hand tells the story of the battle in fascinating detail. Somin succinctly recounts the facts that many readers will remember but adds a great deal of additional detail to show many ugly but unknown truths about it."

“Somin provides a fine tour of the case and of the intellectual history of eminent-domain law. More important, he provides a framework for thinking about the future of eminent domain and private property. . . . Somin has written an important book that maps the road ahead for those who believe that individual freedom cannot be separated from the protection of private property.”

“Somin has written what is likely to be the definitive legal analysis of Kelo, its aftermath, and its future prospects. . . . The Grasping Hand is excellent at laying out the political and doctrinal developments that led up to Kelo and at canvassing the backlash and legislative response to it.”

“Kelo v. The City of New London, perhaps the most derided Supreme Court case in recent memory, has finally received the thorough review it deserves. . . . The Grasping Hand chronicles what led to the infamous decision a decade ago. More importantly, it shows why people of all political persuasions should care about eminent-domain abuse. Somin also adds to the literature by evaluating the effectiveness of the many state laws passed in Kelo’s wake to curtail government abuse of eminent domain.”

“A thorough exploration of Kelo v. City of New London  and the power of eminent domain generally. . . . If the goal of The Grasping Hand was to retrieve the original meaning of ‘public use’ from scholarly and jurisprudential oblivion, Somin has succeeded. Will the Court recognize its error and eventually overrule Kelo? One can only hope.”

Library of Law and Liberty

“An absorbing study not only of the Kelo case, but of the legal and historical context in which it arose; it reveals the fragility of our individual rights against the seemingly boundless power of the modern state and reminds us that we must continue to challenge this kind of arbitrary power in the courts and in the political forum.”

“An in-depth legal analysis of one of the most controversial Supreme Court decisions in recent times. . . . The book provides a very well-written review of the background of the case, a close legal analysis of the relevant case law leading up to it, a detailed review of the legislative and judicial responses to the decision, and a discussion of possible safeguards against excessive use of eminent domain in the face of the Court’s ruling.”

"[A] must-read for anyone interested in the politics and history of property rights and property law in the United States. Its appeal is even broader though, and it would be fruitfully read by anyone with an interest in constitutional theory, judicial impact, or cause lawyering."

Preface to the Paperback Edition

Chapter 1. The Trouble in Fort Trumbull

Chapter 2. From Public Use to Public Purpose

Chapter 3. The Perils of Public Purpose

Chapter 8. Should Blight and Economic Development Takings Be Reformed or Banned?