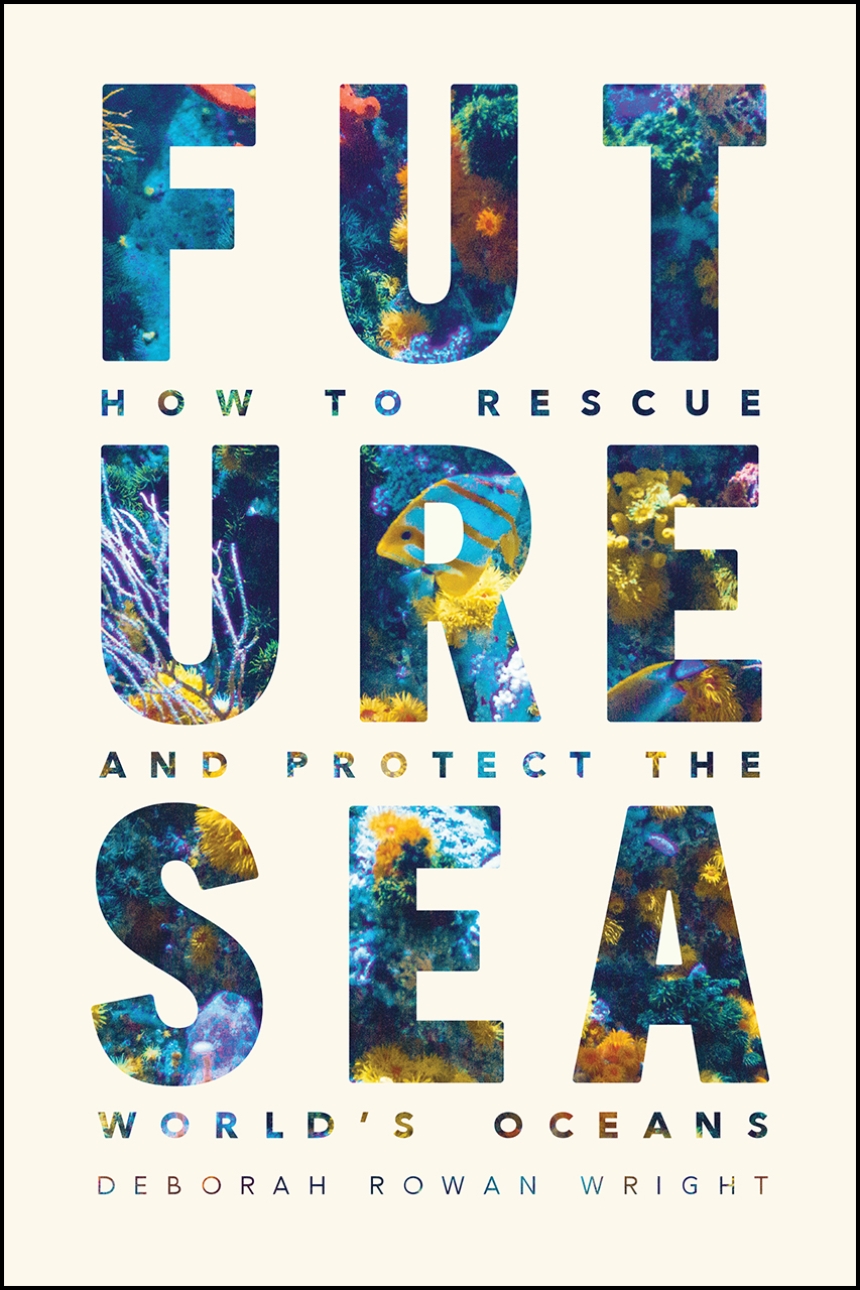 How to Rescue and Protect the World’s Oceans

How to Rescue and Protect the World’s Oceans

A counterintuitive and compelling argument that existing laws already protect the entirety of our oceans—and a call to understand and enforce those protections.

The world’s oceans face multiple threats: the effects of climate change, pollution, overfishing, plastic waste, and more. Confronted with the immensity of these challenges and of the oceans themselves, we might wonder what more can be done to stop their decline and better protect the sea and marine life. Such widespread environmental threats call for a simple but significant shift in reasoning to bring about long-overdue, elemental change in the way we use ocean resources. In Future Sea, ocean advocate and marine-policy researcher Deborah Rowan Wright provides the tools for that shift. Questioning the underlying philosophy of established ocean conservation approaches, Rowan Wright lays out a radical alternative: a bold and far-reaching strategy of 100 percent ocean protection that would put an end to destructive industrial activities, better safeguard marine biodiversity, and enable ocean wildlife to return and thrive along coasts and in seas around the globe.

Future Sea is essentially concerned with the solutions and not the problems. Rowan Wright shines a light on existing international laws intended to keep marine environments safe that could underpin this new strategy. She gathers inspiring stories of communities and countries using ocean resources wisely, as well as of successful conservation projects, to build up a cautiously optimistic picture of the future for our oceans—counteracting all-too-prevalent reports of doom and gloom. A passionate, sweeping, and personal account, Future Sea not only argues for systemic change in how we manage what we do in the sea but also describes steps that anyone, from children to political leaders (or indeed, any reader of the book), can take toward safeguarding the oceans and their extraordinary wildlife.

"Rowan Wright makes a strong case for how choices—big and small, collective and individual—can change the world."

"Rowan Wright’s book emits passion and fire coupled with a growing urgency to 'put things right'—to make good our failings to protect the life of seas and oceans. Wright highlights good practice and encourages its dissemination and adaptation where possible, whilst castigating politicians for ignoring the science and aligning themselves with those who would exploit our seas to the point at which they become lifeless. . . . This book is simply too important not to be read by the general public, marine scientists, ecological/environmental conservationists, representatives of marine-based industries and especially politicians; and since most of it is jargon-free there really is no excuse."

"Independent researcher and ocean advocate Rowan Wright offers an information-packed and carefully crafted review of challenges to the life and health of oceans... Her passionate engagement and work with environmental NGOs, including Friends of the Earth and Marinet (a fish conservation network), have gained her familiarity with relevant international law—the UN Convention on the Law of the Sea, UN Fish Stocks Agreement, and the Convention on Biological Diversity—mandating comprehensive stewardship of the oceans. Rowan Wright's unsentimental analysis shows that well-intentioned conventions can suffer from three failings: weak governance, flimsy monitoring, and minimal compliance... The book is highly recommended."

"In his book Half-Earth, the famous biologist E.O. Wilson proposed setting aside half of the planet’s surface for conservation purposes. Rowan Wright will do you one better; given how important they are for life on the planet, how about we completely protect the oceans. What, all of it? Yes, not half, all of it. We need a gestalt shift, from ‘default profit and exploitation to default care and respect.’ Such a bold proposal is likely to elicit disbelief and cynicism—’Impossible!’—and Rowan Wright has experienced plenty of that. But hear her out, for sometimes we are our own worst enemy. Future Sea is a surprisingly grounded, balanced, and knowledgeable argument that swayed me because, guess what, the oceans are already protected. . . . I admit that Rowan Wright’s initial brief raised my eyebrows. However, her even-handed treatment of the subject and her insights into environmental law quickly tempered my skepticism. The way forward proposed here will not be easy, and she never pretends it will be, but the urgency with which she makes her case is utterly convincing. Future Sea is a galvanizing book."

"Our ocean life-support system continues to buckle under human pressures. We have been approaching marine conservation backward, Rowan Wright argues at the outset of her new book, Future Sea. Instead of regulating individual fisheries or putting boundaries around select areas of the ocean, we need to protect the whole thing."

“Future Sea sets out marine policy researcher Rowan Wright’s ideas about how to end destructive industrial activities at sea and enable ocean wildlife to return and thrive. Luckily, she includes steps that anyone, from children to political leaders, can take."

"Future Sea delivers not only the promised 'how' but also the reasons why we should safeguard the ocean from human activities. Advocate and researcher Rowan Wright outlines the critical link between the ocean’s health and our ability to mitigate global warming, the tremendous potential of marine renewable energy, and the ocean’s timeless role as a resource to communities around the world. More profoundly, she argues for its intrinsic value, outside of a human context, noting the vastness and richness of coastal and underwater ecosystems, home to millions of species that are yet unclassified, yet unknown. . . . The times when Rowan Wright draws on her own experiences with ocean life and researching her subjects are when the language is liveliest. Her arguments are most convincing when her own voice is clearest—when the frustration, passion, and will for change of an individual emanate in a kind of slow-burning glow of articulate British restraint. The voice of a single rational, concerned woman make the bolder claims and proposals all the more stealthily convincing. . . . It is her sensitivity to both the complex emotional response to environmental destruction and the profound connections human beings have to the natural world that make the book an effective advocacy tool. I certainly didn’t feel emotionally prepared to take in more environmental ‘bad news,’ but found myself changed after reading the book, feeling that understanding, bearing witness, is also part of making a change. The trick is to move past the paralysis. Rowan Wright pinpoints what is perhaps the greatest challenge, our current global leadership vacuum, describing her dream of ‘leaders with compassion and integrity.’ The implicit message is that for good leadership, too, we all bear some responsibility."

"Books about climate change are often rife with doomy predictions, but Future Sea brims with hopeful stories of communities around the world that are working to protect and conserve our oceans. Our seas face many threats, including climate change, pollution, and overfishing, but this book is solutions-oriented. A marine-policy researcher, Rowan Wright puts forth a sweeping—if somewhat radical—plan that offers total protection of all oceans on Earth and all of their living inhabitants. The book also includes actions individuals can take right now to be better stewards of the seas."

"A very stimulating and rewarding read."

“Rowan Wright combines insightful conversations with brilliant minds in marine science with vivid storytelling and detailed analysis to renew readers’ sense of hope that it is not too late to save our seas. . . . All at once eye-opening, thought-provoking, rage-inducing, and empowering, Future Sea is an excellent read for ocean lovers.”

"An ambitious and useful handbook. . . . It is an eye-opening book that will fill your soul with the right amount of optimism and call for action. It will tell you in an easy-to-read, step-by-step outline of how to save the planet’s seas."

"Combines a legal scholar’s understanding of arcane theories and doctrines... with a modern conservation practitioner’s knowledge of the many threats to ocean populations and ecosystems... Wright provides us optimists with a roadmap to substantially restore the health of ocean ecosystems."

“In Future Sea, Rowan Wright makes a convincing call to optimism. From ‘Inky the octopus’ to the Law of the Sea convention she provides a cogent, easy-to-read argument for protecting the whole of our blue marble planet. A fast read on a deep subject, this thoughtful book will leave you feeling empowered to take the plunge, understanding that in saving the natural abundance and diversity of our seas we’re really saving ourselves.”

David Helvarg, author of "Saved by the Sea" and "The Golden Shore"

“Rowan Wright’s book is a clear call to action to modernize the Law of the Sea so that it can deal with the changes in society, in the sea, on land, and in the atmosphere that have arisen since it came into force in 1994. This is the freshest, most sensible, and most optimistic perspective I have seen in a long time. I enjoy very much the positive, can-do approach. Very motivating.”

Drew Harvell, Cornell University, author of "A Sea of Glass" and "Ocean Outbreak"

1. Back-to-Front World
2. The Laws of Life
3. Teeming Seas
4. The Free Sea
5. Theory to Reality
6. Counteroffensive
7. Worrying about the Wrong Stuff
8. The Silver Bullet?
9. The Power of Many Small Changes
10. Finding Like Minds