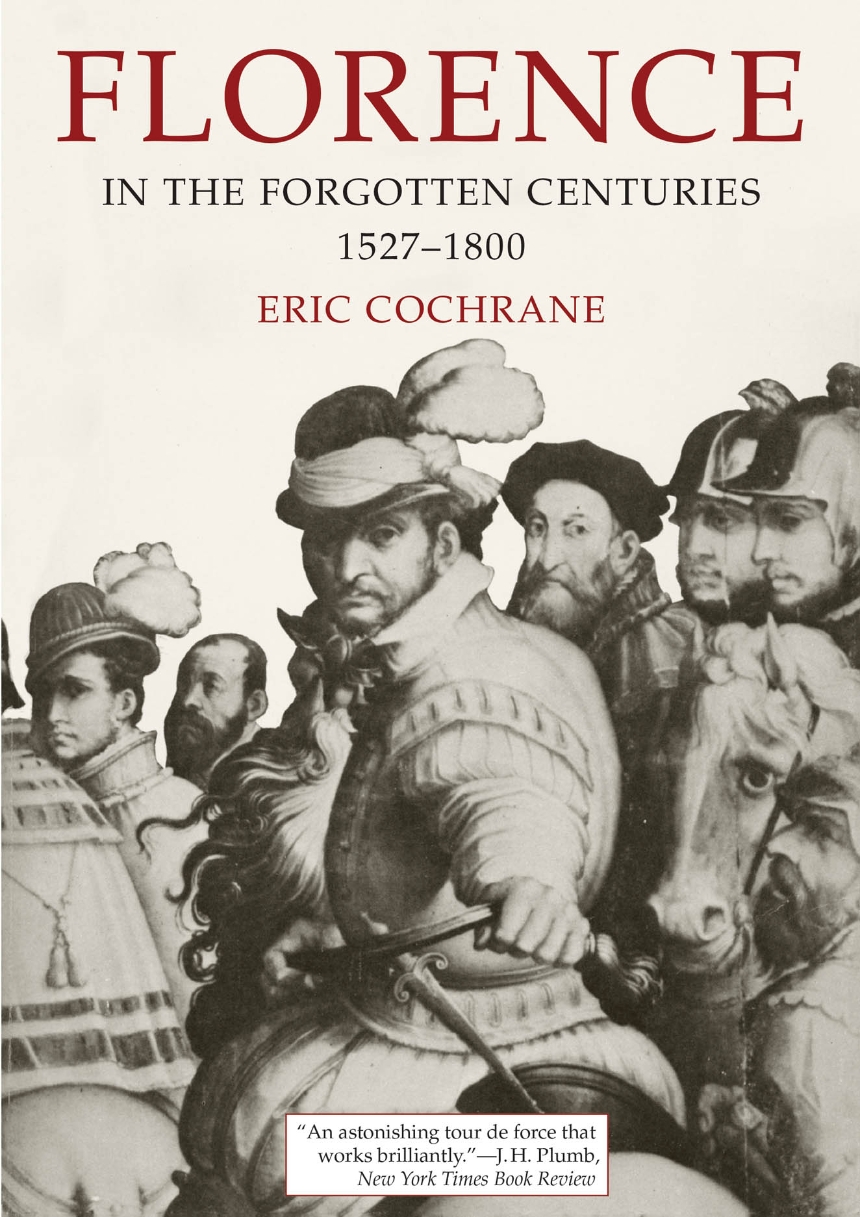 The city of Florence has long been admired as the home of the brilliant artistic and literary achievement of the early Renaissance. But most histories of Florence go no further than the first decades of the sixteenth century. They thus give the impression that Florentine culture suddenly died with the generation of Leonardo, Machiavelli, and Andrea del Sarto.

Eric Cochrane shows that the Florentines maintained their creativity long after they had lost their position as the cultural leaders of Europe. When their political philosophy and historiography ran dry, they turned to the practical problems of civil administration. When their artists finally yielded to outside influence, they turned to music and the natural sciences. Even during the darkest days of the great economic depression of the late seventeenth and early eighteenth centuries, they succeeded in preserving—almost alone in Europe—the blessings of external peace and domestic tranquility.

“Florence in the Forgotten Centuries is an ambitious and impressive work. Not only does it survey a great deal of territory, much of it new, but it experiments courageously with a novel technique of historical narrative. . . .  A work that is stylish and engaging as well as being back by great scholarly authority.”

“This is in many ways a remarkable book which seems certain to remain the definitive history of Florence during the sixteenth, seventeenth, and eighteenth centuries. It deals with every aspect of Florentine life during this period by examining a series of Florentine figures from Duke Cosimo di Medici and Galileo through the bureaucrat and reformer Francesco Maria Gianni, who served during the last years of the eighteenth century. The author has probed into every aspect of the life of Florence in depth and made meticulous use of every conceivable scrap of evidence in an impressive display of scholarship.”

BOOK I
FLORENCE IN THE 1540s
How Cosimo de’ Medici turned a worn-out republic into a well-run monarchy
I. Election
2. Survival
3. Affirmation
4· Consolidation
5. Elaboration
6. Triumph

BOOK II
FLORENCE IN THE 1590s
How Scipione Ammirato solved just about all the problems of his age
I. The countryside
2. The city
3. How Ammirato solved Machiavelli’s dilemma by putting politics and religion together again
4. How Ammirato made historiography obsolete by writing a definitive history
5. The twilight of a perfect day

BOOK V
FLORENCE IN THE I730s
How Giovanni Lami discovered the past and tried to alter the future
Prologue: The journalist
1. From Santa Croce to Florence
2. From librarian to historian
3. The end of the Medici
4. Lawyers in office
5. Bottoming out
6. The university and the church
7. The collaborators and the disciples
8. The battles
9. The retreat