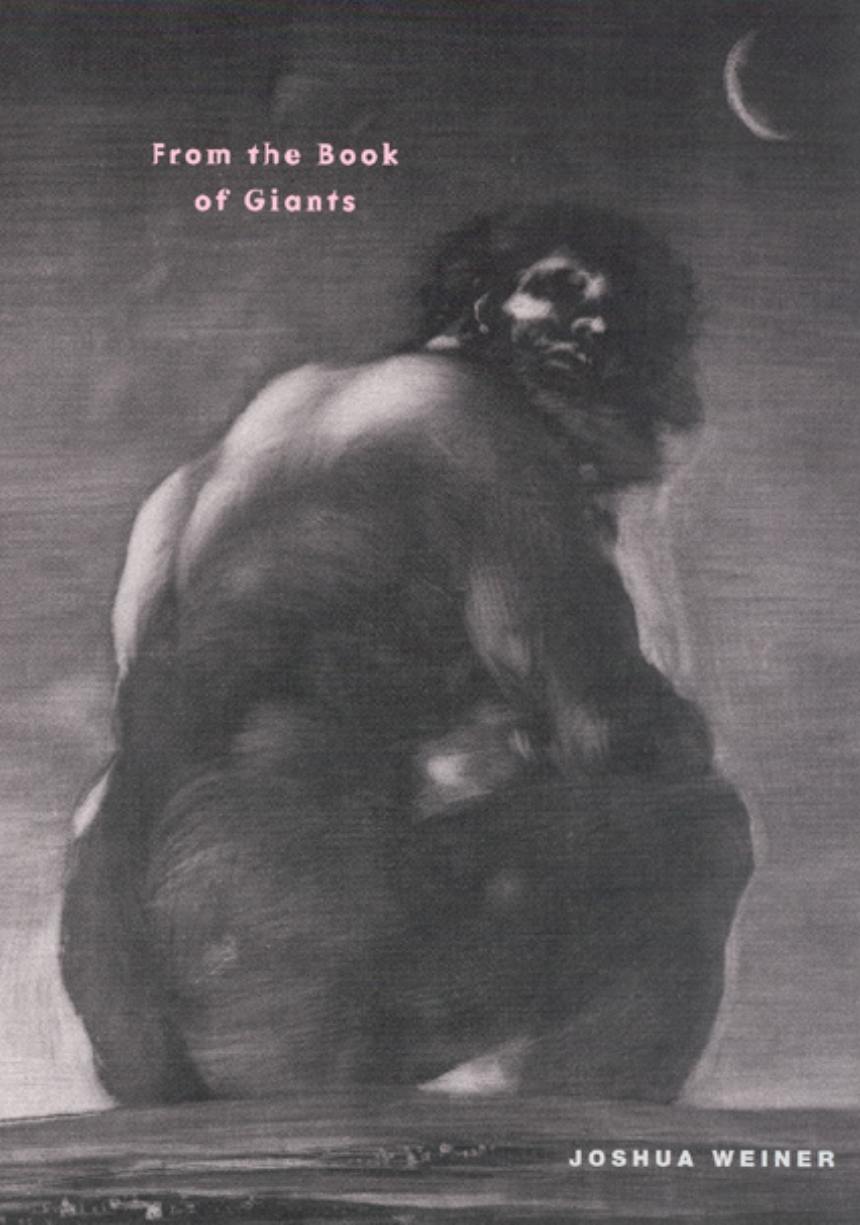 From the Book of Giants

From the Book of Giants

There is no east or west

in the wood you fear and seek,

stumbling past a gate of moss

and what you would not take.

And what you thought you had

(the Here that is no rest)

you make from it an aid

to form no east, no west.

for given map or bell,

Taking its title from a set of writings found in the Dead Sea Scrolls, From the Book of Giants retunes the signal broadcast from these ancient fragments, transmitting a new sound in the shape of a Roman drain cover, in imitations of Dante and Martial, in the voice of a cricket and the hard-boiled American photographer Weegee, in elegies both public and personal, and in poems that range from the social speech of letters to the gnomic language of riddles. Out of poetry’s “complex of complaint and praise,” Joshua Weiner discovers, in one poem, his own complicity in Empire during his son’s baseball game at the White House. In another, an embroidered parrot sings a hermetic nursery rhyme to an infant after 9/11.

“Joshua Weiner’s new book is a wonderful example of how politics and art can come together in a way that is wholly unexpected. In a strange, bold amalgam of domestic narrative, political allegory, and lyric inventiveness, Weiner looks at politics from the vantage of a disaffected householder who has bizarre, visionary tendencies. The public and private spheres have completely collapsed into each other, and every attempt at solace, honest communication, or honorable action is being relentlessly undermined by the threat of death, by public lies, and by wholly inflexible ideologies that are always and everywhere diametrically opposed. But these poems in their prescience also transcend the category of political poems: they are works of original perception, poetic skill, and genuine strangeness. This is a wonderfully mature and original book.” <Tom Sleigh>

“Joshua Weiner’s From the Book of Giants begins and begins again in memory. Here elegy enacts its proximity to this world. While rhyming this life with the next, these stunning poems show us how the quotidian married itself to an everlasting. A piercingly moving and memorable achievement.”

“In this unusually daring and wakeful blend of plainness and poetic complexity, Joshua Weiner sends a new charge through old song. Here we find controlled lavishness of technique—the queries of dream, Joycean pun, surprising abstractions and the heartless wink of rhyme—carried forward along the open themes of grief and chagrin. Rhetorically, the voice may be that of Horace as the poet pulls the knife through the surface of his own (Horatian) equanimity. Or the voice may resemble Randall Jarrell’s as the poems unfold the map of childhood, while at other times it calmly shows Weiner’s understanding of poetry as the language of difficult virtue, an ‘insinuation of spirit curving / round conventional goods.’”

"The most powerful poems in Weiner’s second collection combine narrative and lyric elements and range across subjects and kinds of speech, as in an account of a son’s baseball game on the White House lawn that somehow connects the dots between Pol Pot, Cal Ripken, our current president and the Wild Cherry refrain "play that funky music, white boy... till you die." A later long poem riffs on Berkeley in the ’90s and intertwines the stories of a local "life-artist" called the Polka Dot Man and an overzealous activist killed by an overzealous cop. These poems aren’t political in any easy way, but have politics, memory and language at their center in a manner that recalls former poet laureate Robert Hass’s work. When the lines aren’t tensed enough, or when Weiner (The World’s Room, 2001) loses himself in reverie without pitting reason against it, the poems can edge toward cliché. But these moments are relatively few—Weiner’s formal and lyric gifts both soothe and shock in these poems."

Lament from the Book of Giants