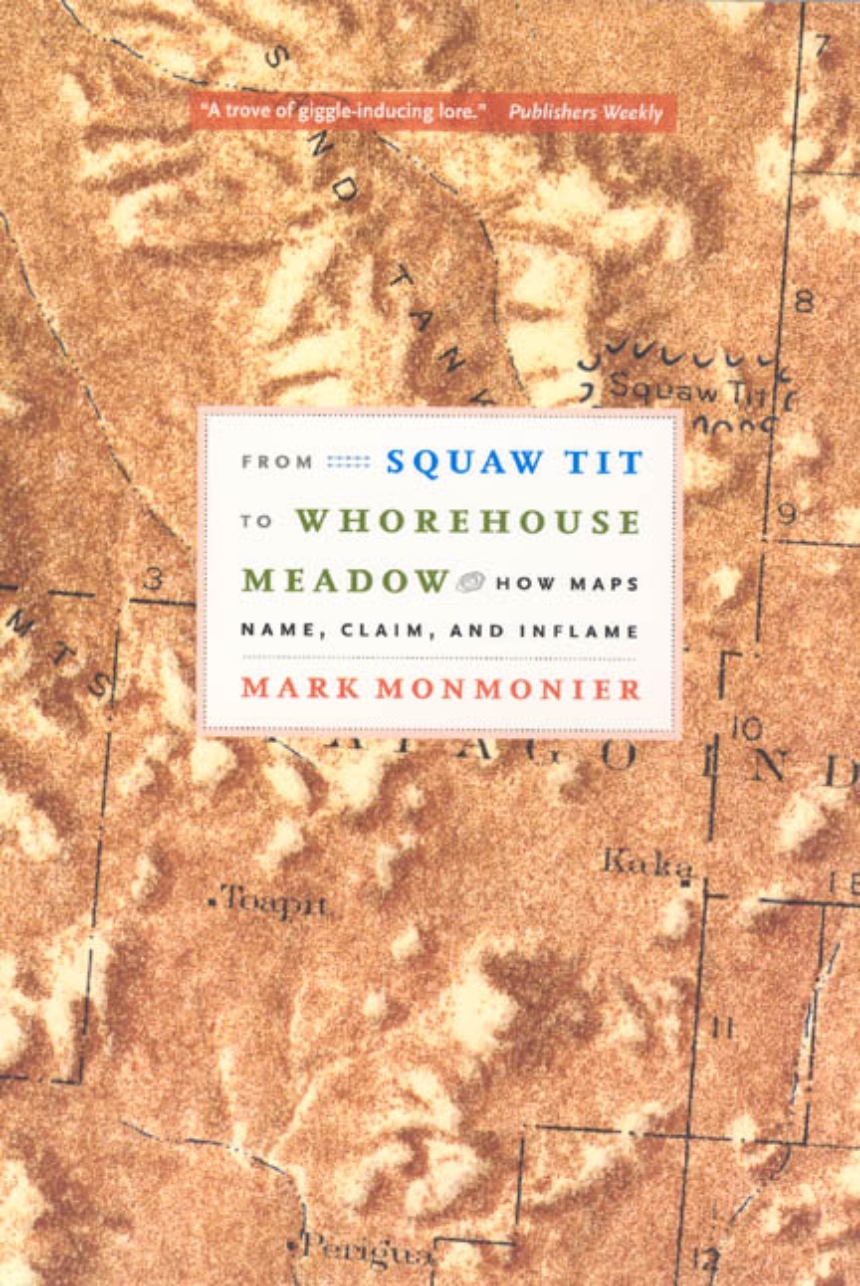 From Squaw Tit to Whorehouse Meadow

How Maps Name, Claim, and Inflame

From Squaw Tit to Whorehouse Meadow

How Maps Name, Claim, and Inflame

Brassiere Hills, Alaska. Mollys Nipple, Utah. Outhouse Draw, Nevada. In the early twentieth century, it was common for towns and geographical features to have salacious, bawdy, and even derogatory names. In the age before political correctness, mapmakers readily accepted any local preference for place names, prizing accurate representation over standards of decorum. Thus, summits such as Squaw Tit—which towered above valleys in Arizona, New Mexico, Nevada, and California—found their way into the cartographic annals. Later, when sanctions prohibited local use of racially, ethnically, and scatalogically offensive toponyms, town names like Jap Valley, California, were erased from the national and cultural map forever.

From Squaw Tit to Whorehouse Meadow probes this little-known chapter in American cartographic history by considering the intersecting efforts to computerize mapmaking, standardize geographic names, and respond to public concern over ethnically offensive appellations. Interweaving cartographic history with tales of politics and power, celebrated geographer Mark Monmonier locates his story within the past and present struggles of mapmakers to create an orderly process for naming that avoids confusion, preserves history, and serves different political aims. Anchored by a diverse selection of naming controversies—in the United States, Canada, Cyprus, Israel, Palestine, and Antarctica; on the ocean floor and the surface of the moon; and in other parts of our solar system—From Squaw Tit to Whorehouse Meadow richly reveals the map’s role as a mediated portrait of the cultural landscape. And unlike other books that consider place names, this is the first to reflect on both the real cartographic and political imbroglios they engender.

From Squaw Tit to Whorehouse Meadow is Mark Monmonier at his finest: a learned analysis of a timely and controversial subject rendered accessible—and even entertaining—to the general reader.

"Why did India block distribution of an updated version of Microsoft’s Windows 95? Is it Mount McKinley or Mount Denali, Hawaii or Hawai’i? Monmonier (geography, Syracuse Univ.; Spying with Maps) answers these questions and more as he reveals in a nontechnical manner the impact of governmental policy and political correctness upon modern cartography. The reader is introduced to the agencies responsible for proposing and approving name changes and spellings, among them the U.S. Board of Geographic Names (BGN) and the United Nations Group of Experts on Geographical Names (UNGEGN). The first four chapters explore recent attempts to find acceptable replacements for place names, primarily in the United States, containing pejorative ethnic or risqué terms (as in the book’s title). One chapter is devoted to the movement to restore indigenous forms and spellings (as in Mount Denali). The remainder of the book examines international disputes over Kashmir, the Sea of Japan, and the more ominous use of maps with nameschanged to "erase" the presence of displaced populations (e.g., the disappearance of Greek names for villages in the Turkish Republic of Northern Cyprus and similarly of Palestinian village names on Israeli maps). An amusing, informative, and topical study of the contentious issue of place names, this is recommended for public and academic libraries."

"An entertaining and enlightening excursion"

"[An] excellent book. . . .  [Mark Monmonier] is an able populariser of academic geography, and an expert guide to the bureaucratic, legal and political hierarchies that determine how places acquire, change and lose their names."

"Fascinating. . . . The book will interest anyone who has ever wondered how place names have come to be established by locals, and then come to endure on maps—at least until the advance of political correctness."

"A funny book...What Monmonier provides is a running commentary on ’risqué toponyms’ and the attempts to censor them by disapproving authorities – frequently protested or prevented by locals who’d learnt to love living in, for example, Intercourse, Pennsylvania, or Wee Wee Hill in Indiana."

"Mark Monmonier’s boyishly infectious history of (principally American) toponyms maps out the sexism, racism and imperialism through which we have come to know our landscapes.... Mark Monmonier’s book shows that maps are no more neutral than any other record of human construction."

"Monmonier’s [book] will appeal to anyone who wants to know the genesis of place names and how controversial they can be...From Sqauw Tit to Whorehouse Meadow can be revisited and enjoyed for many years, and would there therefore make [an] excellent gift."

"Monmonier carefully simplifies the bureaucratic jargon and processes to craft a study both accessible and entertaining to scholars and the general public alike. His work is a compelling analysis of how cultures claim the spaces they occupy."

"Compelling, thought provoking and always informative, Monmonier’s From Squaw Tit . . . is an essential guide to toponymy’s most dangerous regions."

"A useful book that belongs on the shelf of anyone with an interest in cartographic issues. It is also a pleasant Sunday read, so long as you don’t read it in church with its prominently-titled dust cover."

"A fine discussion not only of the art of making maps to modern times but of the power of names to, as [the author] says, show imperial claims and inflame minorities. . . . If place names interest you as showing human history and progress, or lack thereof, this must be on your reference shelf. The modest price enables you to give one or more as gifts to cartographic fans."