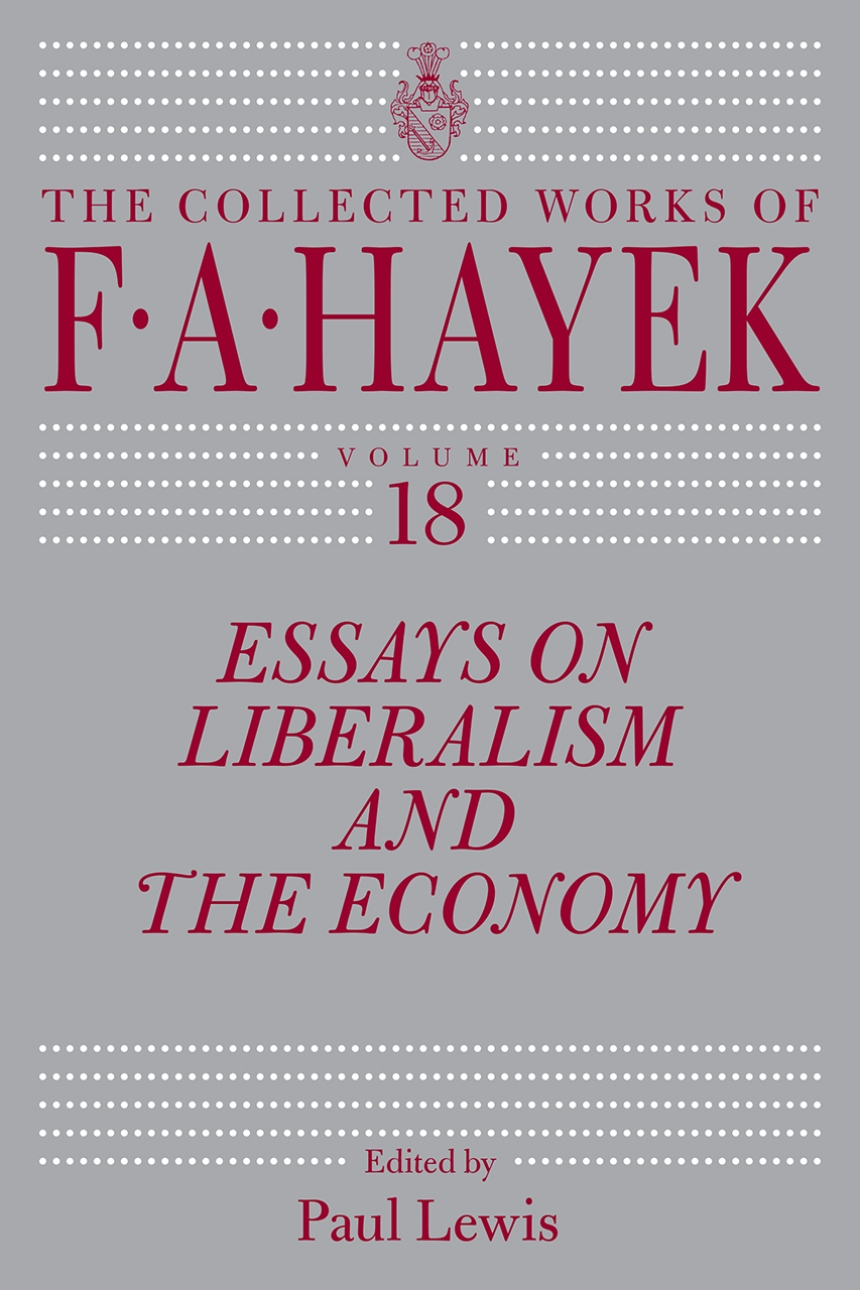 Essays on Liberalism and the Economy, Volume 18

Essays on Liberalism and the Economy, Volume 18

Edited by Paul Lewis
A deft selection of unpublished and little-known works by F. A. Hayek that will serve to enlighten and enliven debates around the ever-changing face of Western liberalism

Across seventeen volumes to date, the University of Chicago Press’s Collected Works of F. A. Hayek series has anthologized the diverse and prolific writings of the Austrian economist synonymous with classical liberalism. Essays on Liberalism and the Economy traces the author’s long and evolving writings on the cluster of beliefs he championed most: liberalism, its core tenets, and how its tradition represents the best hope for Western civilization.

This volume contains material from almost the entire span of Hayek’s career, the earliest from 1931 and the last from 1984. The works were written for a variety of purposes and audiences, and they include—along with conventional academic papers—encyclopedia entries, after-dinner addresses, a lecture for graduate students, a book review, newspaper articles, and letters to the editors of national newspapers. While many are available elsewhere, two have never appeared in print, and two others have not been published in English.

The varied formats collected here are enriched by Hayek’s changing voice at different stages of his life. Some of the pieces resonate as high-minded and noble; some are meant as cuts to “intellectuals” (a pejorative term when used by Hayek) like Keynes and Galbraith. All serve to distill important threads of his worldview.

The Collected Works of F. A. Hayek

"This collection of Hayek's essays includes some of his most important. I'm eager for the world to have this convenient access to these works. Lewis is a learned guide with just the right touch, and his introduction is masterful. This work is both splendid and important."

Editor’s Introduction
Editorial Foreword
1. Liberalism
2. The Transmission of the Ideals of Economic Freedom
3. The Prospects of Freedom
4. The Webbs and Their Work
5. Closing Speech to the 1984 Mont Pèlerin Society Meeting
6. ‘Free’ Enterprise and Competitive Order
7. The Economic Conditions of Inter-state Federalism
8. The Meaning of Government Interference
9. The Economics of Development Charges
10. Effects of Rent Control
11. Economics
12. The Uses of ‘Gresham’s Law’ as an Illustration of ‘Historical Theory’
13. The Dilemma of Specialisation
14. Full Employment, Planning and Inflation
15. Inflation Resulting from the Downward Inflexibility of Wages
16. Unions, Inflation, and Profits
17. The Corporation in a Democratic Society: In Whose Interest Ought It to and Will It Be Run?
18. The Non Sequitur of the ‘Dependence Effect’
19. What Is ‘Social’? What Does It Mean?
20. The Moral Element in Free Enterprise
21. The Principles of a Liberal Social Order
22. The Constitution of a Liberal State
23. The Confusion of Language in Political Thought
24. Economic Freedom and Representative Government
25. The Campaign against Keynesian Inflation
26. The New Confusion about ‘Planning’
27. The Atavism of Social Justice
28. Whither Democracy?
29. Socialism and Science
30. Two Pages of Fiction: The Impossibility of Socialist Calculation
31. Letters to The Times, 1931–1981
Index