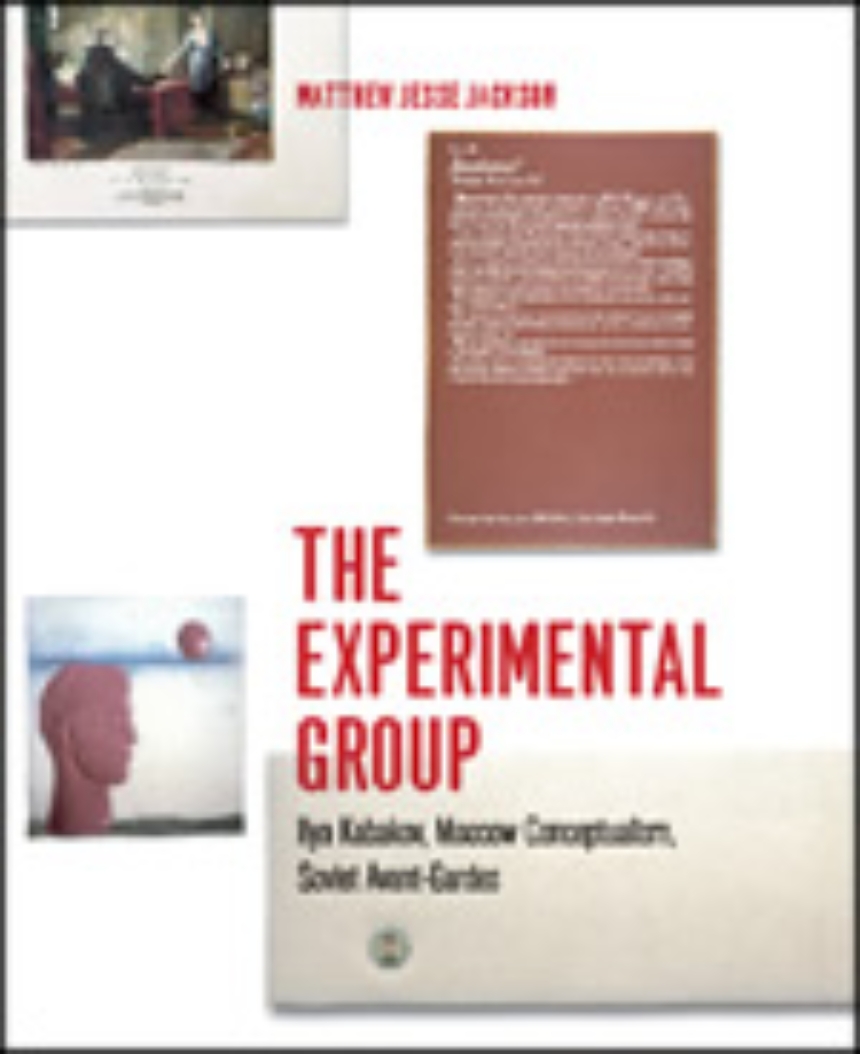 A compelling study of unofficial postwar Soviet art, The Experimental Group takes as its point of departure a subject of strange fascination: the life and work of renowned professional illustrator and conceptual artist Ilya Kabakov.

Kabakov’s art—iconoclastic installations, paintings, illustrations, and texts—delicately experiments with such issues as history, mortality, and disappearance, and here exemplifies a much larger narrative about the work of the artists who rose to prominence just as the Soviet Union began to disintegrate. By placing Kabakov and his conceptualist peers in line with our own contemporary perspective, Matthew Jesse Jackson suggests that the art that emerged in the wake of Stalin belongs neither entirely to its lost communist past nor to a future free from socialist nostalgia. Instead, these artists and their work produced a critical and controversial chapter in the as yet unwritten history of global contemporary art.

“Matthew Jesse Jackson’s The Experimental Group is an engaging, beautifully written, and erudite study of unofficial Soviet art. It makes a strong case for Kabakov’s achievements across multiple art forms, and provides brilliant readings of numerous individual drawings, albums, mixed media work, and installations. Moving far beyond his own field of art history, Jackson makes a major statement about Soviet society, culture, and politics as a whole. Without idealizing the late Soviet period in the least, he shows how its norms of cultural conversation, the organization of work and free time, occasional but critical moments of access to Western innovations in the arts, emerging new philosophies of the artistic process, and the important role of viewer (or reader) response all conspired to make possible extraordinary art. Jackson prompts us to recognize the "period of stagnation" as a time of intellectual ferment--with the Soviet citizenry acting as the ultimate "experimental group." This monumental study of creativity in and after the late Soviet period is a remarkable scholarly achievement.”

"Matthew Jesse Jackson’s writing and quality of mind put him in the forefront of the next wave in modern art studies."—Thomas E. Crow, Institute of Fine Arts

"Jackson’s thorough account is now the best introduction in English to this peculiar and fascinating period."

"Very few contemporary art history books are of such note that they appear to revise completely their chosen topic, as well as potentially a few others along the way, but Matthew Jesse Jackson’s The Experimental Group does precisely that."

“The best art historical text I have read on postwar Soviet art. . . . For me this book is as close to a page-turner as any art history book is ever likely to be.”

"Jackson demonstrates . . . a deep familiarity with the era’s artistic milieu."

“A rich account…a rigorous analysis…the most comprehensive treatment of the most distinguished living post-Soviet artist has arrived.”

“Jackson engagingly combines an analysis of Kabakov’s work with perceptive analysis of contemporaries such as Eric Bulatov, Oskar Rabin, Andrei Monastyrskii, Vitali Komar, and Aleksandr Melamid. He amplifies this analysis with references to Russian literature and to numerous sources in art criticism and the philosophy of language and perception. Jackson’s access to Kabakov and familiarity with Moscow’s cultural milieu give readers a sense of direct contact with the intensely nuanced world of Moscow conceptualism. . . . Recommended.”

“The most concretely informative book on the Moscow Conceptualist milieu to date. Jackson’s lucid, engaging prose further recommends his study, especially to readers seeking an introduction to Soviet unofficial art.”

“With The Experimental Group, Matthew Jesse Jackson has produced an informative and exciting blend of a monograph on Ilya Kabakov and a broader discussion of Moscow unofficial art from the 1960s to the 1980s. The author draws on an impressive array of material collected through thorough research and numerous interviews with artists and art theorists. The breadth and richness of the text testifies to the fact that the author interacts with his subject as a fish moves in water.”

“The Experimental Group strikes a fine balance between theoretical reflections on the role of the artist in the Soviet Union, the history of a number of artistic groups that comprised the Soviet avant-garde of the 1950s–1980s, and contextualized interpretations of conceptual artists’ works. . . . In addition to its numerous analytical merits, the book has great narrative power.”

“Jackson takes careful analysis seriously, at the level of both form and content, producing nuanced readings that meticulously unfold a wealth of references and inside jokes to a new audience. Key works and exhibitions that form the canon of Moscow Conceptualism sit politely in their chronological places and are brought alive by socio-historical passages designed to instruct us about the realities of late Soviet life.”