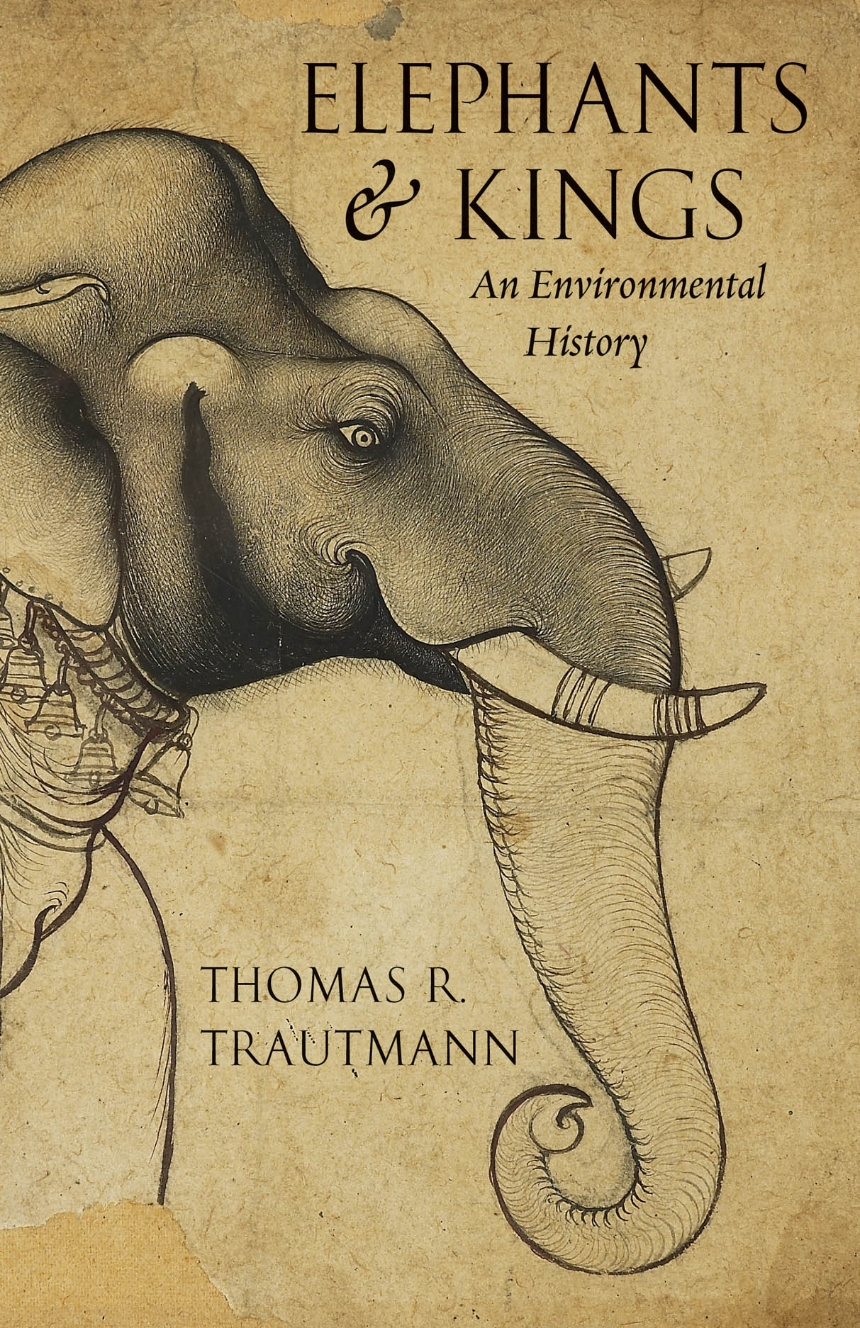 Because of their enormous size, elephants have long been irresistible for kings as symbols of their eminence. In early civilizations—such as Egypt, Mesopotamia, the Indus Civilization, and China—kings used elephants for royal sacrifice, spectacular hunts, public display of live captives, or the conspicuous consumption of ivory—all of them tending toward the elephant’s extinction. The kings of India, however, as Thomas R. Trautmann shows in this study, found a use for elephants that actually helped preserve their habitat and numbers in the wild: war.
Trautmann traces the history of the war elephant in India and the spread of the institution to the west—where elephants took part in some of the greatest wars of antiquity—and Southeast Asia (but not China, significantly), a history that spans 3,000 years and a considerable part of the globe, from Spain to Java. He shows that because elephants eat such massive quantities of food, it was uneconomic to raise them from birth. Rather, in a unique form of domestication, Indian kings captured wild adults and trained them, one by one, through millennia. Kings were thus compelled to protect wild elephants from hunters and elephant forests from being cut down. By taking a wide-angle view of human-elephant relations, Trautmann throws into relief the structure of India’s environmental history and the reasons for the persistence of wild elephants in its forests.

“The intelligence, majestic presence, and physical prowess of the Asian elephant was not lost on India’s monarchs. As historian Thomas Trautmann shows in this scholarly environmental history, the beast’s usefulness in warfare and its prodigious dietary needs ensured royal protection for swathes of forest in ancient India, where the wild animals were captured for specialized training. That the country still has 30,000 elephants is a testament to their enduring place in the collective imagination; but as Trautmann argues, India’s surviving patchwork of thirty-one elephant reserves may not sustain them.”

“Akin in my mind to Moby Dick, where the need for blubber and whale meat meant capturing a huge mammal, which could not be bred like other fish, because of its size, life cycle, and so on. That novel, like no other, manages to weave a massive cosmic thread around this simple idea of an economic requirement, a massive mammal, and the minds of the people who must capture it. As does Trautmann for the analogous land mammal. For which reason, I would like to dub Elephants and Kings the Moby Dick of ancient India —a vastly superior work of history because it is enlivened and enlarged by such an unexpected use of the imagination.”

“While elephants were never deployed in battle by the British, they played a huge role in warfare across Asia from around 500 BC until they were made redundant by artillery. This history is traced in Thomas Trautmann’s superb Elephants and Kings. The book is based on a huge array of sources, ranging from those in Sanskrit, including the Arthashastra, courtly poetry and treatises on elephants, to Chinese and classical European texts. His most thought-provoking argument is that elephants survived better in India than elsewhere in Asia precisely because they were needed for war. . . . This elegantly written book is a key contribution to the environmental history of India and the growing literature on elephants.”

“In this clearly written, thorough study, Trautmann, an expert in ancient India, examines the historical relationship between Indian royal courts and war elephants. . . . He provides valuable insights into how royal courts influenced each other in the ancient world. More intriguing is his argument that Indian kings protected forests to ensure a supply of war elephants, thus promoting the persistence of the elephant in South Asia.”

“Engaging and erudite account of why elephants have survived in India when they have disappeared over much of their former range, especially China. Covering more than three thousand years of recorded history and a terrain that extends from North Africa to East Asia, forensically interpreting the material record while trawling through texts as diverse as the Arthashastra and a history of the Ringling circus, Trautmann’s scholarship is as hugely  impressive and graceful as the pachyderms he discusses. Put simply, this is a marvelous book. . . . A magisterial work which is a pleasure to read. . . . This is how environmental history should be done: by seamlessly combining a wide-ranging vision with detailed attention to all the elements that converge in the intertwining of nature and culture.”

“‘Tour de force’ best describes this monumental work of historical and ecological scholarship. And only a scholar of the caliber of Thomas Trautmann, with long experience in doing ‘deep history,’ could have written it—a book that spans three thousand years and a geographical area ranging from China to Rome and North Africa, and encompasses political histories, wars and armies, forests and ecology, elephants in the wild and in captivity, and the millennia-long interaction between elephants and humans.”

"From the geostrategic and military perspective, Trautmann has opened up a fascinating door into the discussion of “land ethic.” Military historians and geostrategists, it seems, have a future in cooperative research, which goes well beyond the discussion of elephants and cavalry in their role in warfare, and indeed how human interaction with the land, as prompted by the propensity for warfare, plays into shaping human history and the environment."

The AAG Review of Books

“In Elephants and Kings, Trautmann’s singular range of erudition traces the military, political, and cultural roles of royal war elephants from their origins in ancient India across the wide region from the Mediterranean through Southeast Asia. Graceful prose, startling insights, and beautiful illustrations mark this extraordinary fusion of political and environmental history.”

Richard P. Tucker, author of A Forest History of India

“The elephant in Asia is remembered as a royal mount, but it was more effectively used as a crucial constituent of the army, not to be replaced until many centuries later by artillery. Trautmann, drawing on his impressive and extensive scholarship, provides a unique perspective of the Indian past, analyzing the connection between kingship, the elephant in warfare, and the environment.”

Romila Thapar, author of The Past as Present

“Elephants may be ubiquitous across cultures of Southern Asia, but their presence has a literal and metaphorical past that may hold clues to their continued survival in these often densely populated lands. Trautman’s tour de force spans much of Asia, and his story stretches into the Egypt of the Ptolemeys. At its core is the story of three millennia of taming and centuries of honing this huge animal as a war machine. India emerges at the center of the story for its pioneering role in elephant taming, keeping, and its royal protection of elephant forests over two thousand years ago. No reader will ever view the animal or its human benefactors (or exploiters) again without reference to this fascinating work.”

The term “page-turner” is seldom applied to books in our field, but Elephants & Kings certainly deserves it. Yet the ease and pleasure of reading it should not distract the reader from the persuasive arguments and innovative points made about the accidental but persistent interdependence between the great beast (elephant) and the great man (king).

Journal of the American Oriental Society

"Well researched and accessibly written, Elephants and Kings should be widely read and referenced.
Scholars, students, and general readers should take note of how the physical, faunal,
and floral environments can deeply inform political, social, military and cultural history. Further,
Trautmann demonstrates the value of taking the long-range perspective of the entire
sweep of India’s recorded history, indeed of its natural history from the Holocene to the
Anthropocene, within the vast geography of all of Eurasia and also parts of Africa, to show
patterns that more limited time and space definitions could not."

"Trautmann’s book is a major contribution to the understanding of ancient Indian kingship and ‘Indianizing kingdoms’. Elephants are only the starting point for his examination of how Indian kings, the main focus of his analysis, unified the subcontinent and influenced neighbouring kingdoms."