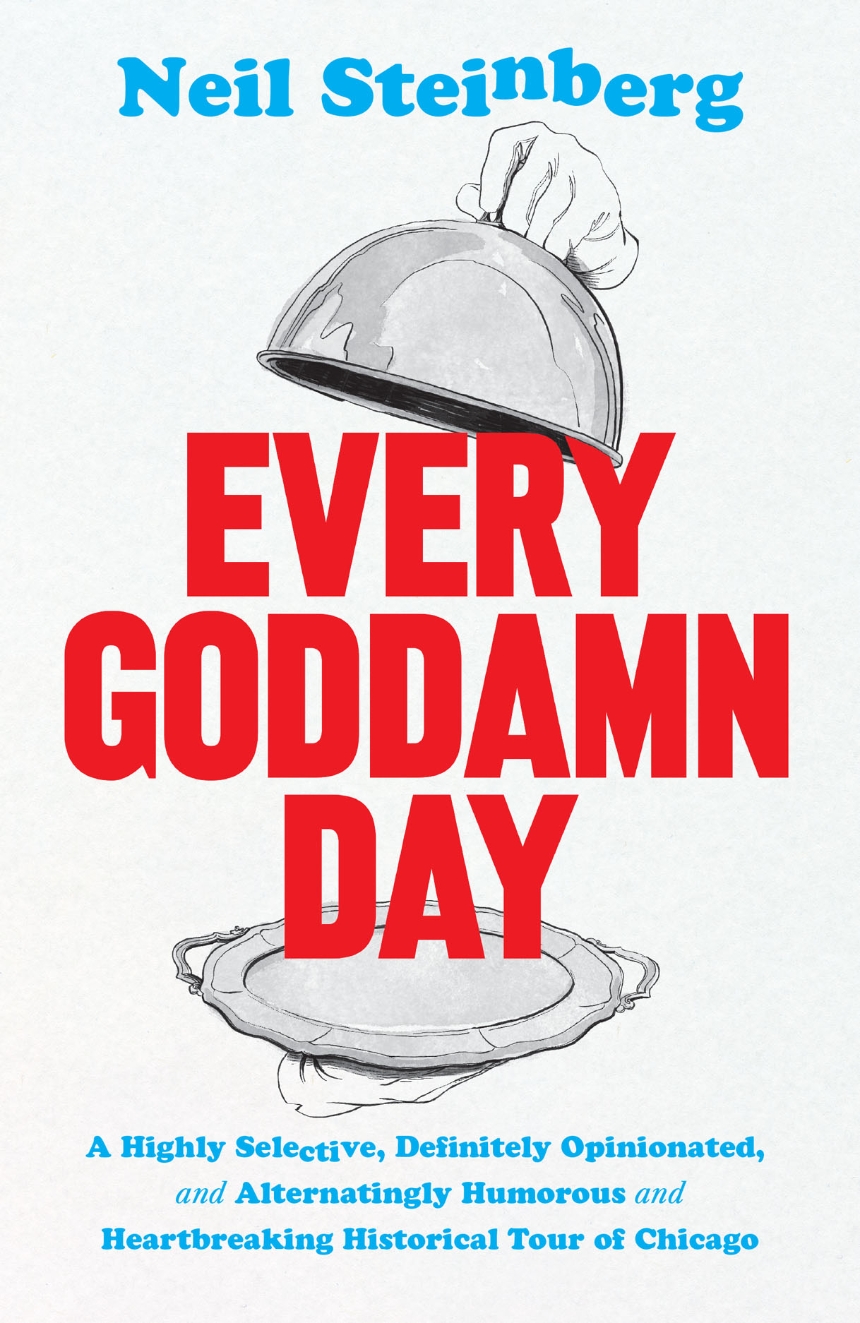 A daily celebration of Chicago’s history, both known and obscure, and always entertaining.

Every day in Chicago is a day to remember. In a city so rich with history, every day is the anniversary of some storied historical or cultural moment, whether it’s the dedication of the Pablo Picasso sculpture downtown on August 15, or the arrest of Rod Blagojevich at his Ravenswood home on December 9, or a fire that possibly involved a cow on October 8.

In Every Goddamn Day, acerbic Chicago Sun-Times columnist Neil Steinberg takes the story of the city, pares away the dull, eat-your-peas parts, and provides 366 captivating daily readings in what makes Chicago Chicago and America America. It calls upon a wide cast of characters, from Oscar Wilde to Muhammad Ali, from Emma Goldman to Teddy Roosevelt, and from Richard M. Daley to Fred Hampton, to create a compelling narrative that can be read at a sitting or in a yearlong series of daily doses.

From New Year’s Day to New Years’ Eve, Steinberg takes us on a vivid and entertaining tour, illuminating the famous, obscure, tragic, and hilarious elements that make each day in Chicago memorable.

"Speaking of clever: the Sun-Times’ Neil Steinberg retells the history of Chicago in “Every Goddamn Day” (Oct. 21), as in whatever famous this or that happened on every day in history, all 365 of them."

"[Steinberg] creates a moving, living picture of Chicago’s past.  . . .  here is Chicago in hundreds of glittering facets, with stories of art, theater, industry, racism, injustice, and sheer goofiness. . . .Witty, economical and often whimsical, he lends color and freshness to each event.”

“The breadth of [Steinberg’s] interests and talents is on full display in his just-published book, Every Goddamn Day: A Highly Selective, Definitely Opinionated, and Alternatingly Humorous and Heartbreaking Historical Tour of Chicago. Each day on the calendar gets its own entry, and, almanac style, Steinberg chooses one event from that day in local history and tells a tale. What emerges is the patchwork quilt of our stunning, infuriating, delightful city stitched together by Steinberg’s deft prose.”

History is not a place. You cannot go there. The past isn’t a field you can run through, admiring the wide sweep of waving grain in one glance, then leaning in close to examine a single kernel on a stalk of wheat.

History is not a thing, either. You cannot touch it. Yes, there are objects, artifacts that you can caress. The solid iron plow, the flapper’s beaded dress. You can weigh those in your hand and almost feel the faint vibrations of long ago.

But they are only shells, husks, empty buildings where somebody once lived. You can stand in the room and imagine what the wallpaper must have been like, maybe even find some old shreds. Maybe there is a brass bed; if not, a corner where the brass bed almost certainly stood.

The people from the past are gone, mostly, unaffected by our notice, unmoved by our
approval or scorn. And those who linger are not always reliable witnesses. They’re just as liable to tell you what they wish had happened as admit what did. Maybe more so.

What remains is the echo of what they might have once done, in words or pictures, written at the time, or later, a confused jumble of facts we can try to sort through, dividing the real from the illusionary, then molding the results into meaningful shapes.

History is a story. Once upon a time this man—and until recently it was almost invariably a man—left his home and went somewhere else, which he then claimed as his own. Voyages and discoveries, wars and treaties, emperors and kings.

These tales are told to explain and justify. Who we are, how we got here, what happened to us when we arrived. Or, increasingly, when the others arrived. To make sense of the world. That’s why each generation revisits the past, tells the stories anew, takes the building blocks of events and reassembles them into lessons that resonate now.

Because who “we” are keeps changing, and with it what is considered significant enough to merit understanding. The circle of inclusion expands and contracts as we ask: Who is important to the story? Who is the narrator? Who are the dynamic actors? That evolves, generation to generation.
We winnow the past with our living breath, our values today, blowing away the chaff. Even if we accurately relate what happened before, we see it differently than the people experiencing it. Thus history shifts from the perspective of the people on the ships, arriving, to those on the shore, watching them arrive. Nothing more eloquently demonstrates the biases of the past than to read how it conveys history, the blaze of glory we once needed to warm ourselves, marshaling our forebears into a chorus of praise.

We’re obligated to look. It’s half responsibility, half recreation. To me, and to many, reading history is part of the joy of being alive, like listening to music or eating good food. Reading history embroiders the present with the designs of the past. It’s a regular activity to promote healthy living, like exercise. I write a blog called “Every goddamn day”—the mild expletive a reflection of the grittier corners of life—where I post an essay, true to the name, every single day, usually at midnight. Some are my daily columns from the Chicago Sun-Times, some are arguments about current events, or deep dives into etymology, or books, or objects, just about anything. My only requirement is that the topic is something that reasonably intelligent people might want to know more about. Often the blog, like the column, is pegged to the day of the year—a holiday, an anniversary—providing background and context.

Often the essays are about Chicago, a city I’ve lived in, or near, for more than 40 years. This book breaks the history of the city into 366 entries, one for every day of the year. I have employed several organizing principles: first, what a resident or visitor should know about the city, the most significant parts. But also the most engaging, unexpected aspects. I cover subjects where Chicago affected the world, more than the world affecting Chicago. Thus, the first cell phone call is mentioned but Pearl Harbor is not. I explore transportation, industry, race, labor, finance, culture, architecture, science, sports, music, literature. I try to represent the broad spectrum of people who live in Chicago. “I don’t want this to be the white man’s history of Chicago,” I vowed. I’ve tried to be expansive,but I know I’ve been incomplete.

Certain themes had to be sounded: the Chicago River is the key to the city’s founding, as a portage to the Des Plaines River. Chicago continued growing as a crossroads with the arrival of the railroads. How Chicago appears to others, and how we see ourselves, is another constant refrain.
The buildings built here, the books written, the food produced.

And some stories have to be in any book presenting the story of Chicago. The Fire of 1871. The World’s Columbian Exposition. Certain individuals too. As much as I’d be happy to never hear the name “Al Capone” again, he must be included. Richard Daley too, pater et fils. And Michael Jordan. But for me familiar topics must be cast in a new light. The definition of boredom is being told what you already know. Besides, the day will come when readers won’t recognize even the biggest names. “Oprah Winfrey? A TV host of some kind. Popular in her day.”

I tried to limit the number of gruesome crimes—there have been a lot—and the number of great sports moments. Those are already well covered in books that are readily available. So no Grimes sisters. No Stanley Cup.

History needs a structure or it becomes too vast. I found the vignette to be a challenging, stylized form, like haiku, that focuses and concentrates. For some subjects, the challenge was to find the exact date: Chicago has been the heart of the pinball industry since Gottlieb was founded in 1927. But where to pick up the story? A company’s incorporation is a dry event. Chicago is also the capital of the candy universe, or was. But which date should be used to launch the tale?

Some episodes efface others. When Judy the Elephant wouldn’t get into a truck in 1943, her handlers decided to walk her from Brookfield Zoo to Lincoln Park Zoo. Judy’s journey isn’t particularly meaningful; it doesn’t speak to a larger truth, beyond the stubbornness of pachyderms. But to me the big gray beast loping along the streets of Chicago symbolizes the wonder of the place. Stand on a street corner in Chicago long enough and an elephant may go by. 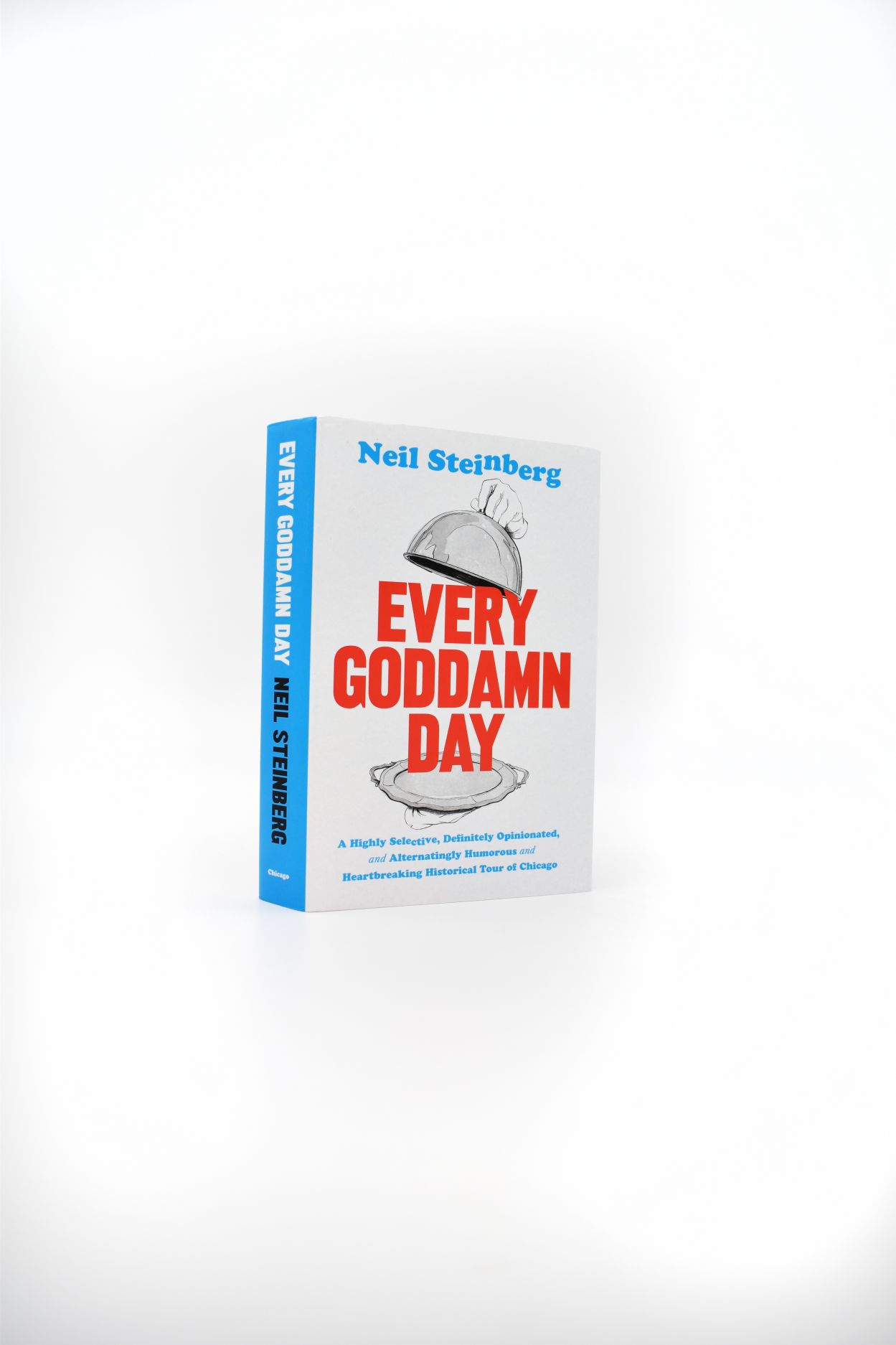 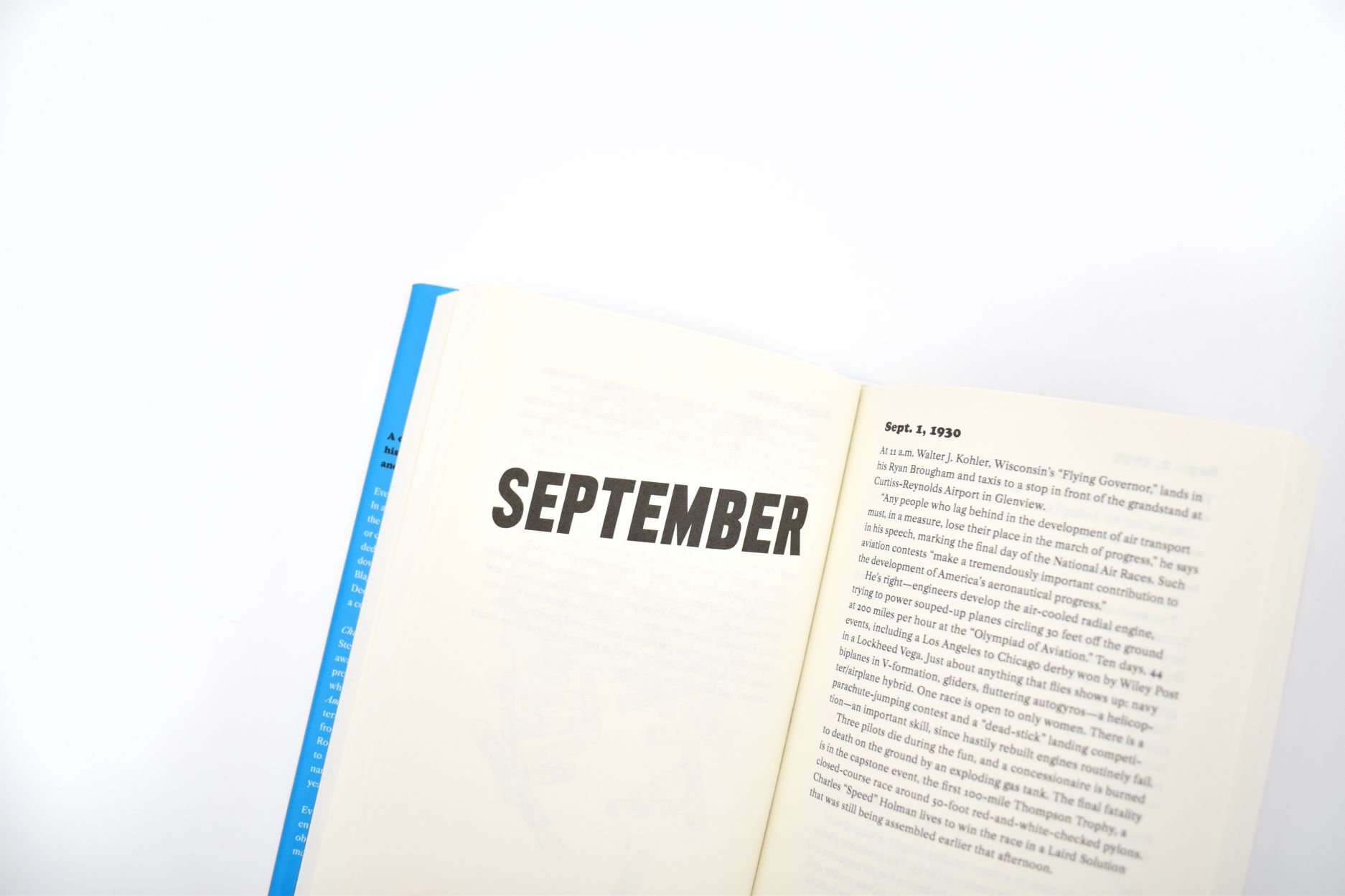 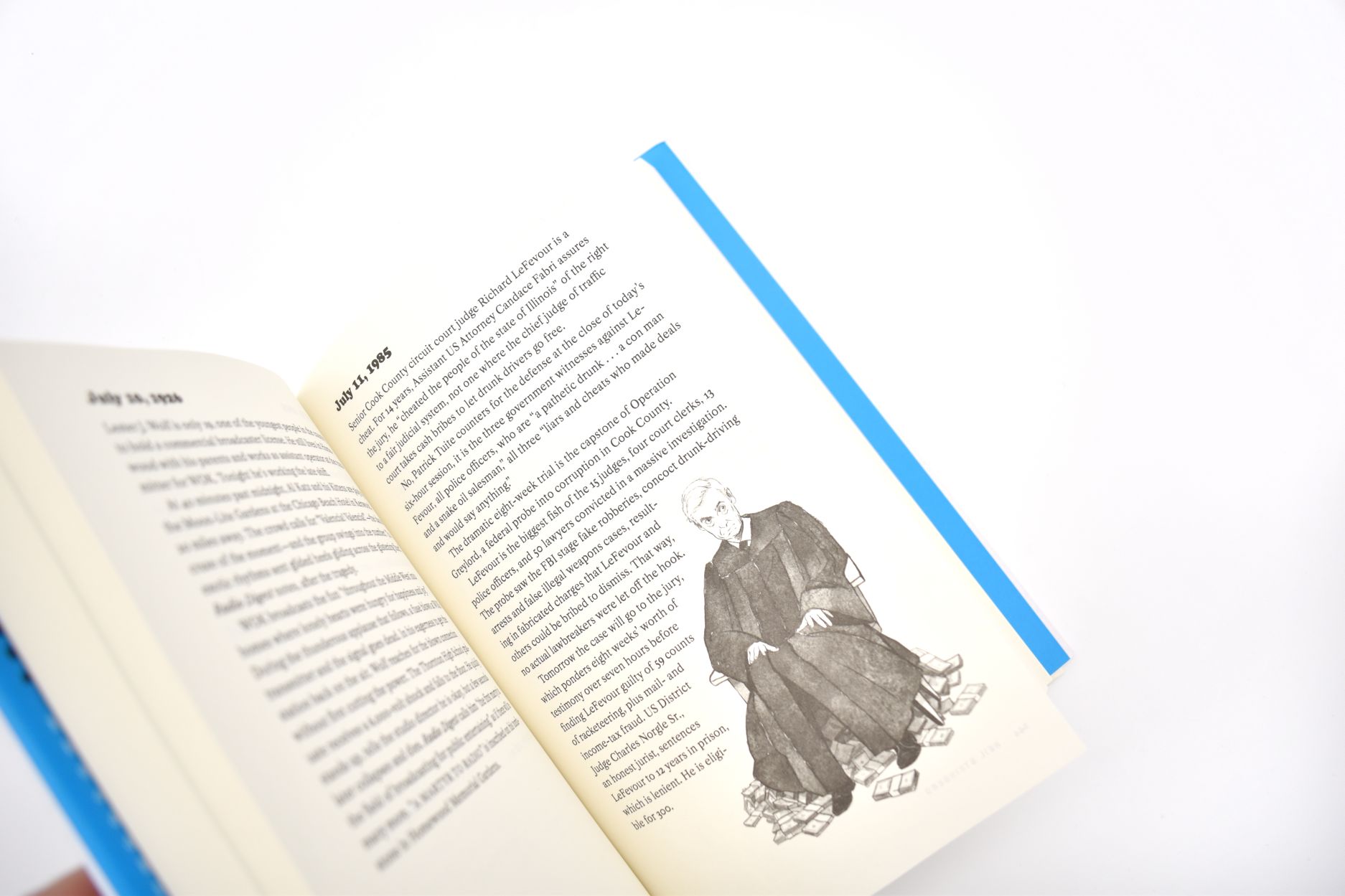 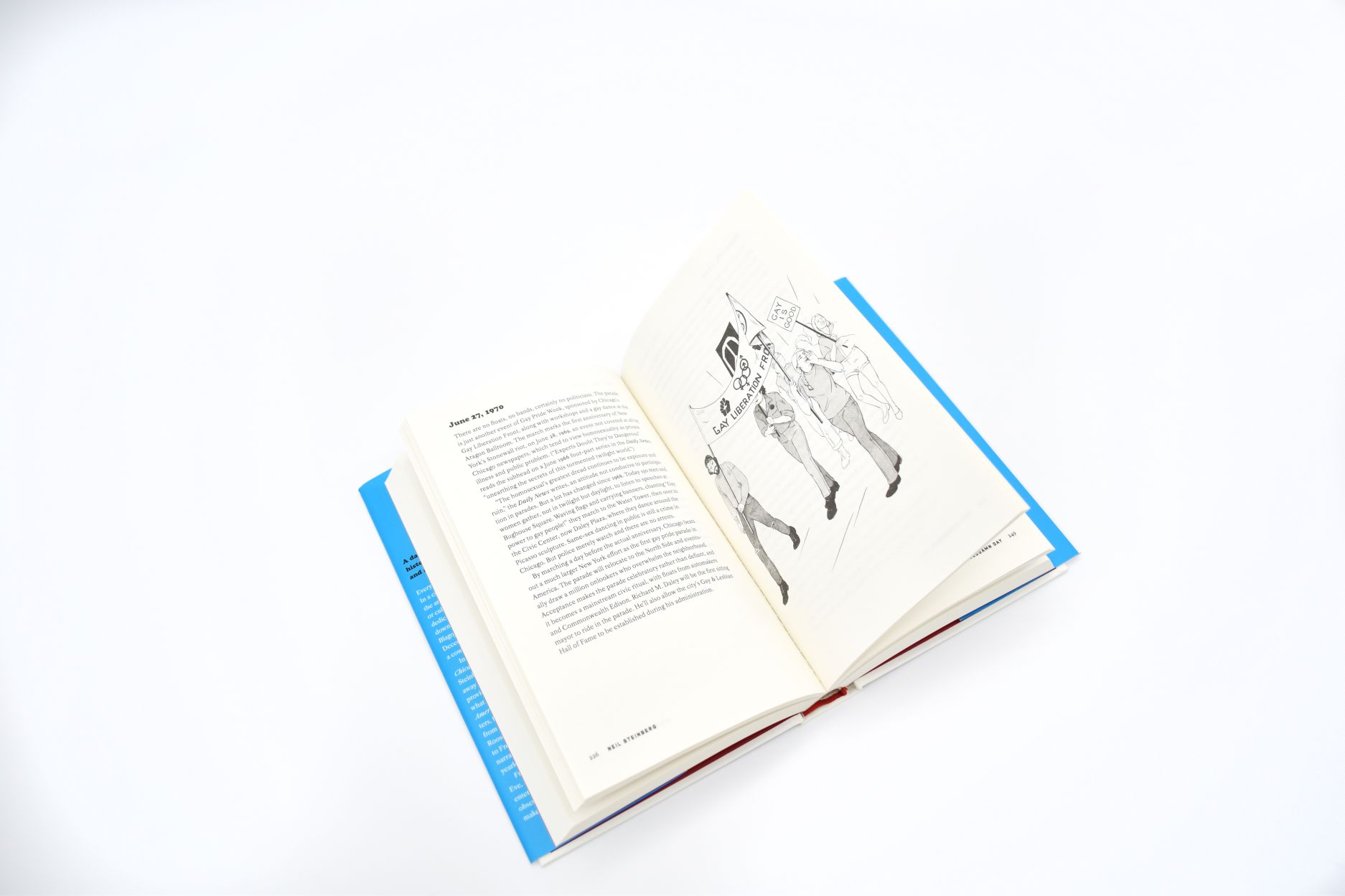 Steinberg, author of Every Goddamn Day, will have an event with the Hyde Park Book Club