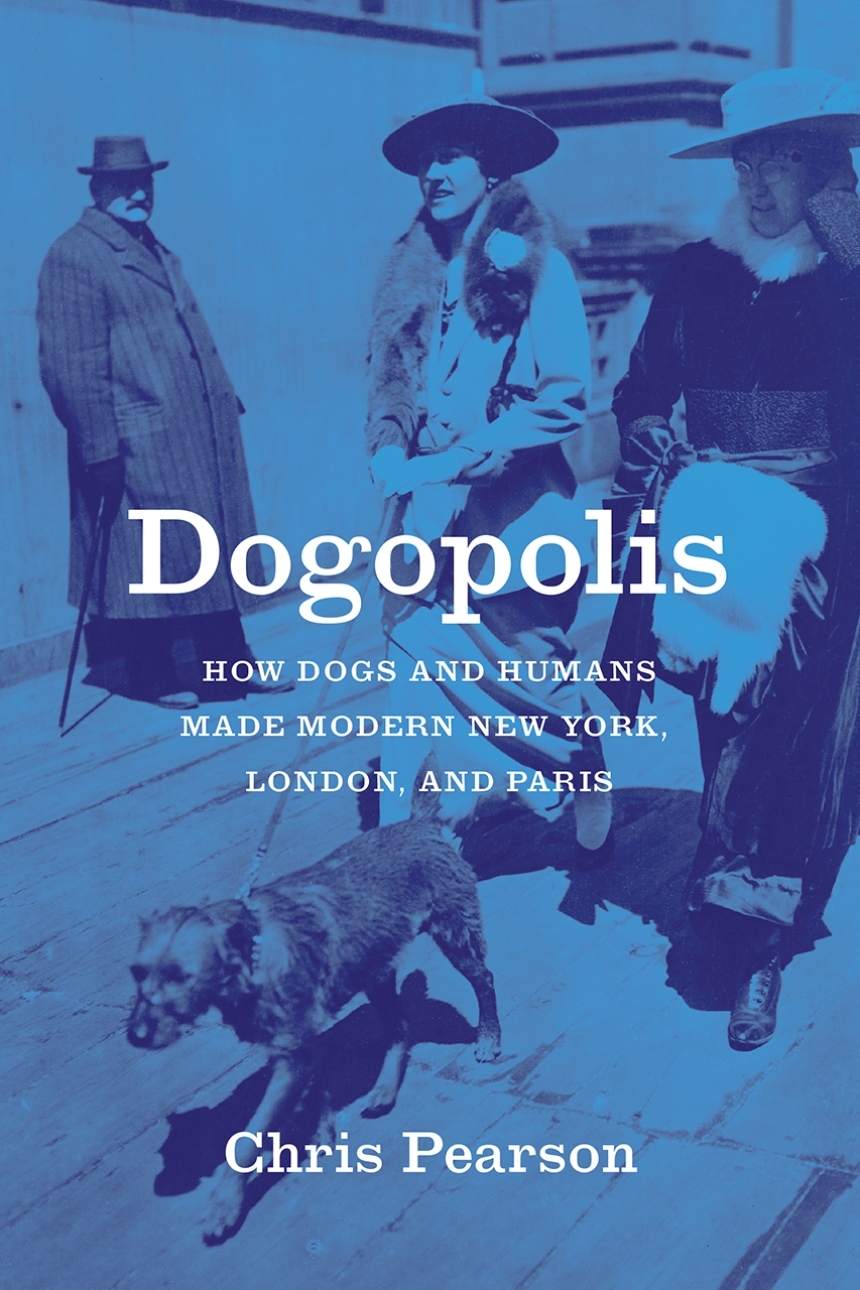 How Dogs and Humans Made Modern New York, London, and Paris

How Dogs and Humans Made Modern New York, London, and Paris

Stroll through any American or European city today and you probably won’t get far before seeing a dog being taken for a walk. It’s expected that these domesticated animals can easily navigate sidewalks, streets, and other foundational elements of our built environment. But what if our cities were actually shaped in response to dogs more than we ever realized?

Chris Pearson’s Dogopolis boldly and convincingly asserts that human-canine relations were a crucial factor in the formation of modern urban living. Focusing on New York, London, and Paris from the early nineteenth century into the 1930s, Pearson shows that human reactions to dogs significantly remolded them and other contemporary western cities. It’s an unalterable fact that dogs—often filthy, bellicose, and sometimes off-putting—run away, spread rabies, defecate, and breed wherever they like, so as dogs became a more and more common in nineteenth-century middle-class life, cities had to respond to people’s fear of them and revulsion at their least desirable traits. The gradual integration of dogs into city life centered on disgust at dirt, fear of crime and vagrancy, and the promotion of humanitarian sentiments. On the other hand, dogs are some people’s most beloved animal companions, and human compassion and affection for pets and strays were equally powerful forces in shaping urban modernity. Dogopolis details the complex interrelations among emotions, sentiment, and the ways we manifest our feelings toward what we love—showing that together they can actually reshape society.

"Pearson’s study of the modernization of three major metropoles makes a thrilling and sometimes chilling case that dogs played active roles in the story of how we together became predominantly urban species. . . . In the Covid era, the lessons of Dogopolis help us think about where the human race is going. . . . Pearson’s in-depth study of the modernization of this dynamic in three Western capitals adds resounding confirmation that dogs prove faithful mirrors of humans’ ever-failing aspirations to humanity."

“Pearson’s history helps to explain why we treat dogs the way we do, and how city-dwellers in particular have come to define themselves in relation to the nonhuman. . . Dogopolis offers a corrective to the rosy way we often prefer to see the human-canine bond: it may be millennia-old but unconditional it certainly is not.”

"Dogopolis makes an original and important contribution to several key areas of scholarship. . . . Pearson’s engaging study provides a template for further research into the place of animals in the city, showcasing approaches that might be profitably extended to other areas of human–animal studies."

"This work offers us a return to the key sites of transformation in the relationship between man and dog, describing the contexts and conflicts engendered by this inter-species urban cohabitation."

“Dogopolis is a beautifully presented book with an evocative historical voice and great confidence and flair. It is also a lot of fun to read. Pearson offers a treasure trove of details about the shared lives of humans and dogs across three rapidly urbanizing cities that epitomized urban modernity and deals with themes at the heart of urban history in his examination of the public and private spaces; class, gender, and race relationships; and public health and disease.”

Neil Pemberton, coauthor of The Invention of the Modern Dog: Breed and Blood in Victorian Britain

“Pearson’s dazzling and elegantly written Dogopolis proves irrefutably that dogs are good to think with. Pearson takes us on a journey encompassing everything from coddling to muzzling, mad dogs to doting owners, dog pounds to pet cemeteries. The result is a finely-textured history of the warp and indeed the woof of urban modernity that is like no other.”

Colin Jones, author of Paris: The Biography of a City

“Straying, biting, suffering, thinking, defecating, the dogs of Paris, London, and New York were central actors in the making of the modern urban experience. Dogopolis is their story, one shared with the middle-class human animals whose ambivalent emotions come alive in this wonderful book.”

Peter Sahlins, author of 1668: The Year of the Animal in France

“Dogopolis provides a vividly detailed comparison of canine experience in London, Paris, and New York. Ranging from the scientific to the political to the (un)hygienic, it traces the development of the profoundly entangled relationship between humans and dogs in modern cities.”

Harriet Ritvo, author of The Animal Estate: The English and Other Creatures in the Victorian Age

“Dogs are urbanites. In his excellent new book, historian Chris Pearson takes us to London, New York and Paris to illuminate how dogs have influenced human emotions like love, disgust and fear. Through a wide range of sources, we gain fascinating insights into the behaviors of urban dogs and how their straying, biting, suffering, thinking, and defecating led to the creation of laws, specialized institutions, segregated contact zones, and even taxes that were crucial for the development of these cities into modern metropoles. A must-read for anyone trying to understand the true multiplicity of urban living.”

"This original, accessible, and well-researched book is a compelling addition to the literature on urban history from a nonhuman perspective. It will undoubtedly also appeal to scholars in fields such as animal geography and urban ecology, and anyone drawn towards a more-than-human reflection for a better understanding of human-animal entanglements."

"What makes this book so good is Pearson’s eye for the telling detail, as he has delved deeply into local sources to give readers a unique feel of daily life for humans as well as dogs in all three cities during the nineteenth and early twentieth centuries."

"Wide-ranging and engaging. . . An important investigation into how the relationship between dogs and humans has shaped modern urban life as well as human imaginations of what urban spaces should be."

"Dogopolis is as accessible as it is pleasurable to read. . . . Pearson provides succinct coverage of the spectrum of dog-related questions that plagued middle-class urbanites around the turn of the century. He discusses topics like rabies scares, anti-vivisection movements, and the founding of humane societies. Readers without much background in the historiography of human-animal relations will find the text informative and easy to navigate."

"Dogopolis is both an excellent introduction to the history of dogs in the modern Western city and a substantial contribution to that history in its own right. . . . There is no better guide than Pearson to the ways in which dogs were caught up in the civic dialogue of modern western societies."