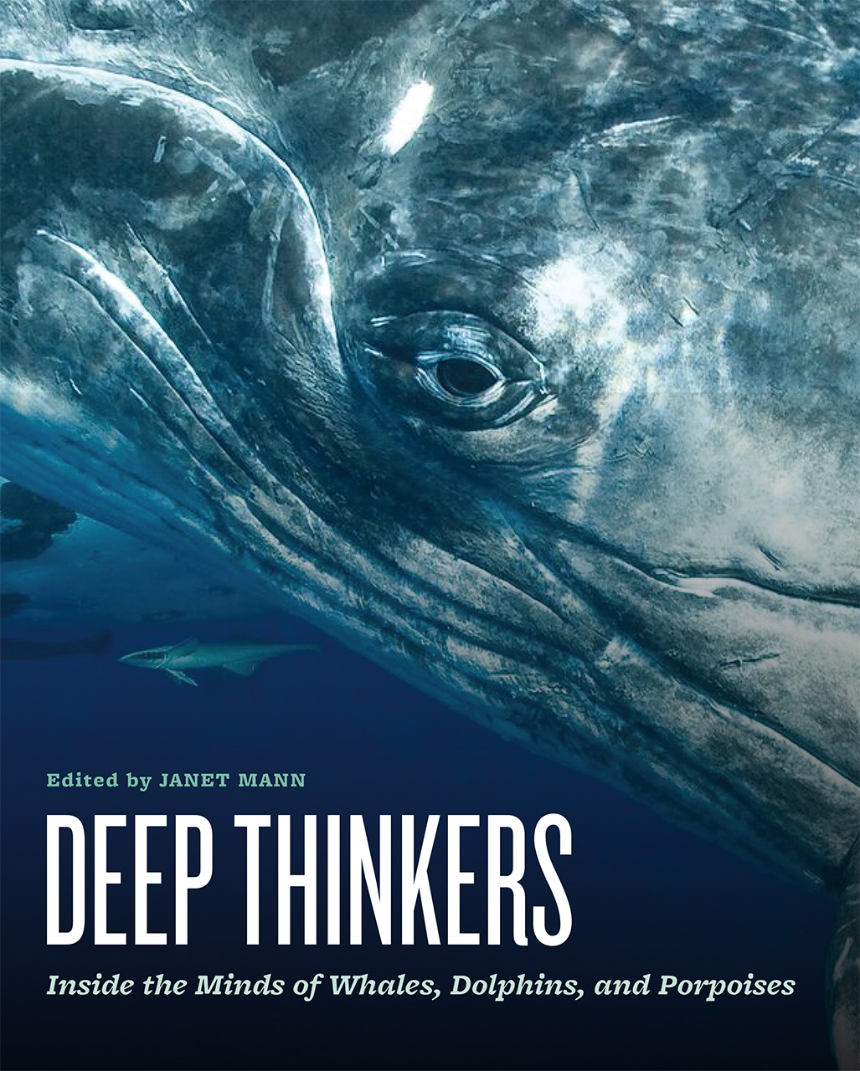 Inside the Minds of Whales, Dolphins, and Porpoises

Inside the Minds of Whales, Dolphins, and Porpoises

Humans aside, dolphins, whales, and porpoises are often considered to be the smartest creatures on Earth. Science and nature buffs are drawn to stories of their use of tools, their self-recognition, their beautiful and complex songs, and their intricate societies. But how do we know what we know, and what does it mean? In Deep Thinkers, renowned cetacean biologist Janet Mann gathers a gam of the world’s leading whale and dolphin researchers—including Luke Rendell, Hal Whitehead, and many more—to illuminate these vital questions, exploring the astounding capacities of cetacean brains.

Diving into our current understanding of and dynamic research on dolphin and whale cognition, communication, and culture, Deep Thinkers reveals how incredibly sophisticated these mammals are—and how much we can learn about other animal minds by studying cetacean behavior. Through a combination of fascinating text and more than 150 beautiful and informative illustrations, chapters compare the intelligence markers of cetaceans with those of birds, bats, and primates, asking how we might properly define intelligence in nonhumans. As all-encompassing and profound as the seas in which these deep cetacean cultures have evolved, Deep Thinkers is an awesome and inspiring journey into the fathoms—a reminder of what we gain through their close study, and of what we lose when the great minds of the sea disappear.

“A winner. A cross between a cetacean encyclopedia and a coffee-table book, Deep Thinkers breaks new ground: ‘Until now no book has covered the state-of-the-art scientific discoveries across cetacean species,’ Mann notes. Mann invited cetacean scientists to contribute to the volume and, as a result, it's teeming with cool stuff. To focus on its stunning photographs for a moment, Heidi Harley's informative chapter ‘Cognition’ includes a wild bottlenose dolphin during apparent play as she balances a yellow clam shell on her rostrum; a group of wild common dolphins collaboratively herding sardines into a ball for easier predation; and an Atlantic spotted dolphin ‘carrying seaweed, possibly to impress females.’ Wow! . . . Gorgeous.”

“If, like me, you are an avid watcher of TV programmes about whales, dolphins and porpoises, and wonder what is going on in the heads of these fellow mammals during their complex behaviour, Deep Thinkers has to be on your reading list. With excellent illustrations and chapters by acknowledged experts, this book gives an overview of the history and current state of research on the minds of cetaceans.... Buy the book–it is a wonderful read.”

“This is a pleasant, nonscientific book written by excellent marine mammal, psychology, and brain scientists. It is beautifully illustrated, with educational color drawings and some of the finest color composites of whales (by Bryan Austin) ever presented, for a total of 150 color plates. ... a lovely work—with fine science interpreted in fine manner, and with some of the most beautiful illustrations and, especially, photographs of cetaceans.”

“The experts in this volume explore the whys and wherefores of cetacean thinking. There are chapters on cognition, tool use and communication, analyses of cetacean social lives, and anatomical studies. In keeping technical language to a minimum and matching the clearly written text to beautiful illustrations and clear and concise diagrams, Mann and her collaborators have produced an evocative summary of what it is to be whale.”

"Deep Thinkers: Inside the Minds of Whales, Dolphins, and Porpoises, edited by Mann, is a gorgeous picture book at the very highest level, in which leading research scientists tell us about the current state of knowledge in their subfields."

“Everything you always wanted to know about cetaceans and their intelligence captured here in a single beautiful volume by some of the world’s greatest experts. The natural behavior of these animals is extremely hard to study. What we have learned is not only astonishing but also humbling.”

Frans de Waal, author of "Are We Smart Enough to Know How Smart Animals Are?"

CHAPTER 1
BENEATH THE SURFACE
Janet Mann & Andrew Read
How and why do we study cetaceans? This chapter looks at the history of human association with cetaceans from whaling to research and monitoring in the wild and in captivity and the challenges ahead.

CHAPTER 2
THE CETACEAN BRAIN
Camilla Butti & Patrick Hof
By studying mammals’ brains and comparing those of odontocetes and mysticetes scientists demonstrate that, in terms of intelligence, size isn’t everything. This chapter considers the relationship between brain and body mass and how scientists determine what it means to have a big brain.

CHAPTER 3
COGNITION
Heidi E. Harley
Humans make sense of their surroundings primarily by sight, a perspective that can skew understanding of cetacean cognition. This chapter adopts the cetacean perception of their aquatic world—using multiple senses, including sound and echolocation.

CHAPTER 8
US & THEM
Andrew Read
From our first encounters with whales as game to attempts to save species from extinction, this chapter looks at how humans and cetaceans coexist. Hunting, fishing, pollution, and sonic disturbance are among the threats whales and dolphins face from human activity.