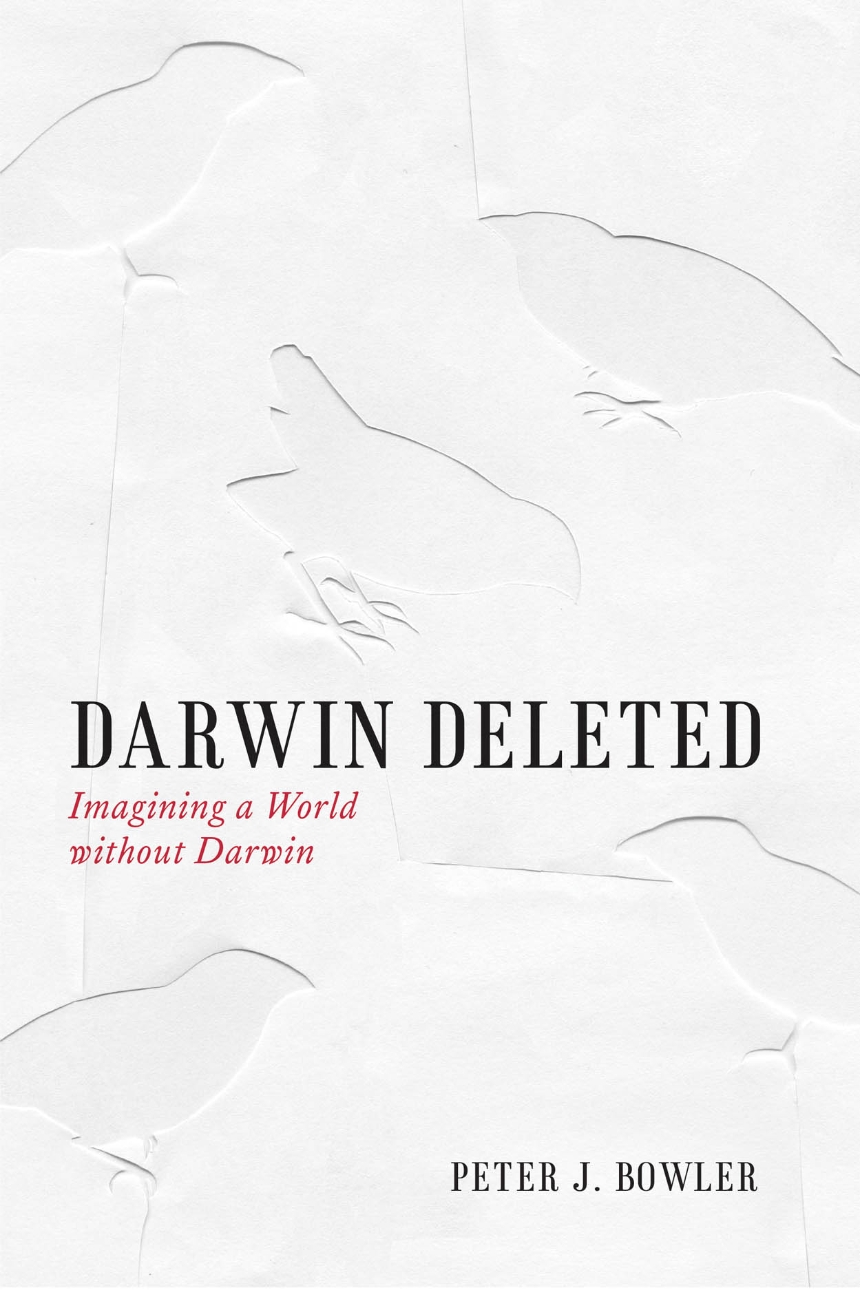 Imagining a World without Darwin

Imagining a World without Darwin

The ideas and terminology of Darwinism are so pervasive these days that it seems impossible to avoid them, let alone imagine a world without them. But in this remarkable rethinking of scientific history, Peter J. Bowler does just that. He asks: What if Charles Darwin had not returned from the voyage of the Beagle and thus did not write On the Origin of Species? Would someone else, such as Alfred Russel Wallace, have published the selection theory and initiated a similar transformation? Or would the absence of Darwin’s book have led to a different sequence of events, in which biology developed along a track that did not precipitate a great debate about the impact of evolutionism? Would there have been anything equivalent to social Darwinism, and if so would the alternatives have been less pernicious and misappropriated?
In Darwin Deleted, Bowler argues that no one else, not even Wallace, was in a position to duplicate Darwin’s complete theory of evolution by natural selection. Evolutionary biology would almost certainly have emerged, but through alternative theories, which were frequently promoted by scientists, religious thinkers, and moralists who feared the implications of natural selection. Because non-Darwinian elements of evolutionism flourished for a time in the real world, it is possible to plausibly imagine how they might have developed, particularly if the theory of natural selection had not emerged until decades after the acceptance of the basic idea of evolution. Bowler’s unique approach enables him to clearly explain the non-Darwinian tradition—and in doing so, he reveals how the reception of Darwinism was historically contingent. By taking Darwin out of the equation, Bowler is able to fully elucidate the ideas of other scientists, such as Richard Owen and Thomas Huxley, whose work has often been misunderstood because of their distinctive responses to Darwin.
Darwin Deleted boldly offers a new vision of scientific history. It is one where the sequence of discovery and development would have been very different and would have led to an alternative understanding of the relationship between evolution, heredity, and the environment—and, most significantly, a less contentious relationship between science and religion. Far from mere speculation, this fascinating and compelling book forces us to reexamine the preconceptions that underlie many of the current controversies about the impact of evolutionism. It shows how contingent circumstances surrounding the publication of On the Origin of Species polarized attitudes in ways that still shape the conversation today.

“Darwin Deleted offers a journey into the history of evolutionism well worth taking. Through his scenario in which the Origin never appeared, Bowler improves our ability to think about the assumptions underlying contemporary debates.”

"Without Darwin, Peter Bowler concludes, we would probably have ended up in much the same place we are today, with an evolutionary theory based largely on natural selection, and with most of the big historical events of the past century unfolding as they did. Where Darwin really mattered was in timing. Here, ironically, the shock of his book, and the polarisation it caused, may have delayed the acceptance of evolution. The great man was ahead of his time, and science may have paid a price for that."

"In this extremely entertaining and meticulously detailed book, Peter J. Bowler explores the development of evolutionary biology sans the grand old bearded one. . . . Removing Darwin from the picture altogether might be seen as rather drastic and many will raise an eyebrow at the approach Bowler adopts, yet it is a powerful and stimulating idea."

"Darwin Deleted does the scientific community a great service by reminding it of ideas that are often mentioned only in passing, if at all, in basic biology classes, or even those that teach evolutionary theory. The mainstream history of science so dominants the story that failed contingencies of history have little bearing once a scientific theory becomes fact. Unless one is a science historian, learners should be engaged in studying and applying the best ideas, rather than retracing dead ends. But the dead ends can present their own fascination. Ideas like inheritance without genetics, the rigid view that once a species emerged it remained unchanged, or spontaneous generation from primitive forms, created ideas against which evidence could be applied."

“A coup in counterfactual history. Only Peter J. Bowler, with his unique command of intellectual history, would dare to propose this book’s radical heresy. Darwinian atheists will excommunicate him; ‘God delusionists’ will slate him for deposing their tribal deity. But it is only by denying Darwin’s historical necessity that the freedom to augur a world of post-Darwinian alternatives becomes possible.”

“What would science, and the world, have been like if Charles Darwin had never published On the Origin of Species? This exhilarating book is Peter Bowler’s answer. He draws on unrivalled knowledge of evolutionary theorizing and its social lives to build up a compelling case for what might have been. Along the way, he shows by example how to pursue ‘counterfactual’ inquiry into the scientific past and why, if we seek genuine understanding of that past, we need to do so.”

“Using his unrivaled knowledge of Charles Darwin and the revolution associated with his name, Peter J. Bowler digs deeply and profoundly into the ideas and events that Darwin’s On the Origin of Species started by asking what would have happened had Darwin died young and the Origin never been written. Would science have gone on much the same; would social ideas associated with Darwin make no appearance? Bowler raises and discusses these and related questions in a work that is fun and informative. Whether or not he is right or wrong in his judgments, he makes you rethink yours. Buy the book and challenge Bowler’s counterfactual history.”

Michael Ruse, author of Darwinism and Its Discontents

“Darwin Deleted is an important contribution to the history of science and is essential reading for students and scholars interested in the biological sciences and evolutionary thought. More importantly, however, it is an accessible book that will engage general readers and should be read by anyone who wants an informed view on the relationship between evolution and religion.”