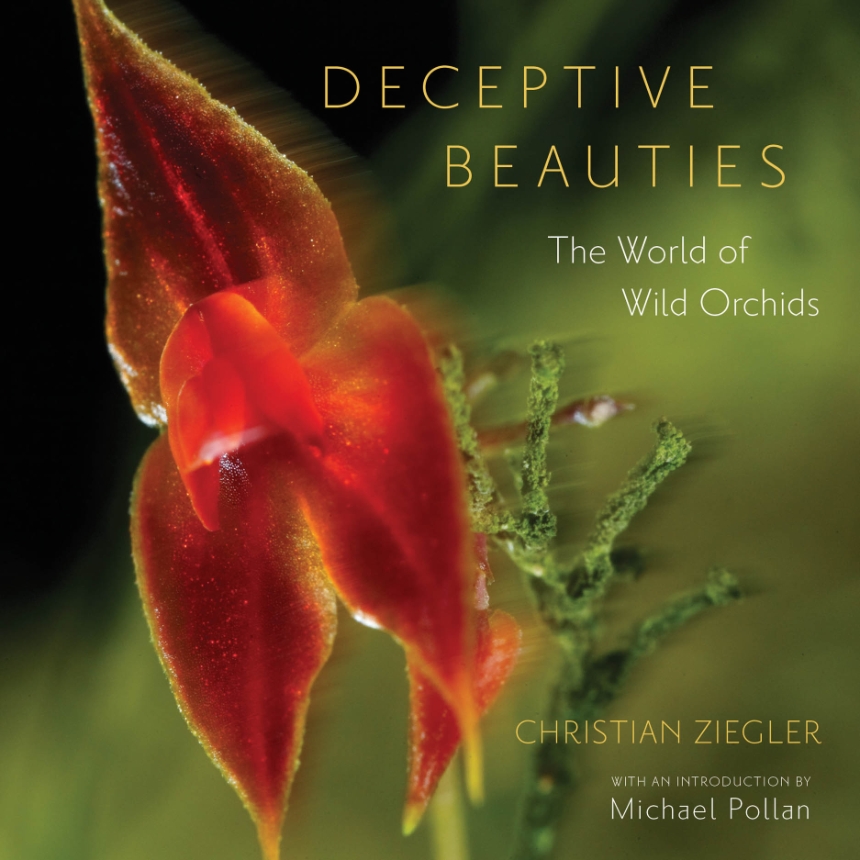 The World of Wild Orchids

The World of Wild Orchids

With an Introduction by Michael Pollan and a Foreword by Natalie Angier
Confucius called them the “king of fragrant plants,” and John Ruskin condemned them as “prurient apparitions.” Across the centuries, orchids have captivated us with their elaborate exoticism, their powerful perfumes, and their sublime seductiveness.
But the disquieting beauty of orchids is an unplanned marvel of evolution, and the story of orchids is as captivating as any novel. As acclaimed writer Michael Pollan and National Geographic photographer Christian Ziegler spin tales of orchid conquest in Deceptive Beauties: The World of Wild Orchids, we learn how these flowers can survive and thrive in the harshest of environments, from tropical cloud forests to the Arctic, from semi-deserts to rocky mountainsides; how their shapes, colors, and scents are, as Darwin put it, “beautiful contrivances” meant to dupe pollinating male insects in the strangest ways. What other flowers, after all, can mimic the pheromones and even appearance of female insects, so much so that some male bees prefer sex with the orchids over sex with their own kind?
And insects aren’t the only ones to fall for the orchids’ charms. Since the “orchidelirium” of the Victorian era, humans have braved the wilds to search them out and devoted copious amounts of time and money propagating and hybridizing, nurturing and simply gazing at them. This astonishing book features over 150 unprecedented color photographs taken by Christian Ziegler himself as he trekked through wilderness on five continents to capture the diversity and magnificence of orchids in their natural habitats. His intimate and astonishing images allow us to appreciate up close nature’s most intoxicating and deceptive beauties.

“Orchids are one of the most diverse and successful families of plants, and can be found in almost every corner of the world. Christian Ziegler captures their beauty through his spectacular photographs, unveiling their mysteries and giving us an insight into their fascinating natural history.”

Cristián Samper, director of the National Museum of Natural History

“Orchid flowers have long been understood to be ridiculously fascinating, and this book shows just that, gorgeously. They certainly merit the ‘Oh my’ reputation they have acquired over the centuries. But, the problem for us mere mortals is that even if most lucky, we only bump into one in the wild every now and then. And here you have many of their kinds all at once, as though you were incredibly lucky in the forest, though of course there is no place or date on earth when you can see them like this. This new look is a fantastic and fantasmatic companion for any day when you are lucky enough to encounter one of these flowers, so unique as to turn any flower show into oatmeal.”

“The images are stunning, a glory of colors and shapes, but this book offers much more. Ziegler—a trained biologist, as well as photographer—shows these remarkable plants in the context of their habitat: marsh, semi-desert, tropical forest. That—and his astonishing photographs of orchids and their pollinators—reminds us how clever, precious, and diverse nature can be, and why conservation matters.”

“Orchids, often rare and tied to specific areas, are increasingly threatened by habitat loss and over-collecting. Ziegler’s book creates an unforgettable portrait of this incredibly diverse plant family, and through their beauty, engineering, and intricacy, he highlights the fragile interplay of life on this planet.”

“Exquisite. . . . [Ziegler] takes you into the flowers’ wild habitats and leads you to the next level in understanding the functional basis of their aesthetic perfection.”

"[W]ell produced, with a skillfully explained text accompanying the magnificent photographic record. . . . I commend this publication to all orchid lovers, especially those with an appreciation of orchids in the wild."

1 ADAPTATION
They captivate with their beauty and seeming fragility, yet orchids belong to one of the hardiest, most adaptable plant families on Earth.

2 DIVERSITY
For plants that are relatively rare, orchids are spectacularly diverse, with 25,000 wild species to their credit—twice as many as birds and four times as many as mammals.

3 POLLINATION
Masters of deception, fully a third of all orchids promise their pollinators far more than they deliver.